Recipe for an Imperfect Bowl of Rice

The goal when cooking rice this way is to achieve a thin layer of toasted crust in the bottom of the pot. The crispy layer in contrast with the fluffy layer of rice on top is a sumptuous combination. I use a 10-inch cast-iron skillet. You could seek out a stone rice crock like the ones they use in Korean restaurants, but the cast-iron pan works just fine. Make your favorite toppings while the rice is cooking. When the toppings are ready, divide the warm rice, crunchy bits and all, among rice bowls and serve.

2. Drain the rice in the strainer again and shake to release the excess water. Transfer the rice to a 10-inch cast-iron skillet. Add 3 cups cold water and the salt and give it a nice stir. Bring the water to a simmer over medium-high heat. Turn the heat as low as you can, cover the skillet with a tight-fitting lid, and cook for 18 minutes. Turn off the heat and allow the rice to rest for 10 minutes, with the lid still on.

3. Take the lid off the skillet, turn the heat on to medium, and cook the rice, without stirring, for 3 to 5 minutes, until the rice on the bottom of the pan turns amber and crisp. You can keep the rice warm in the skillet until you are ready to serve. 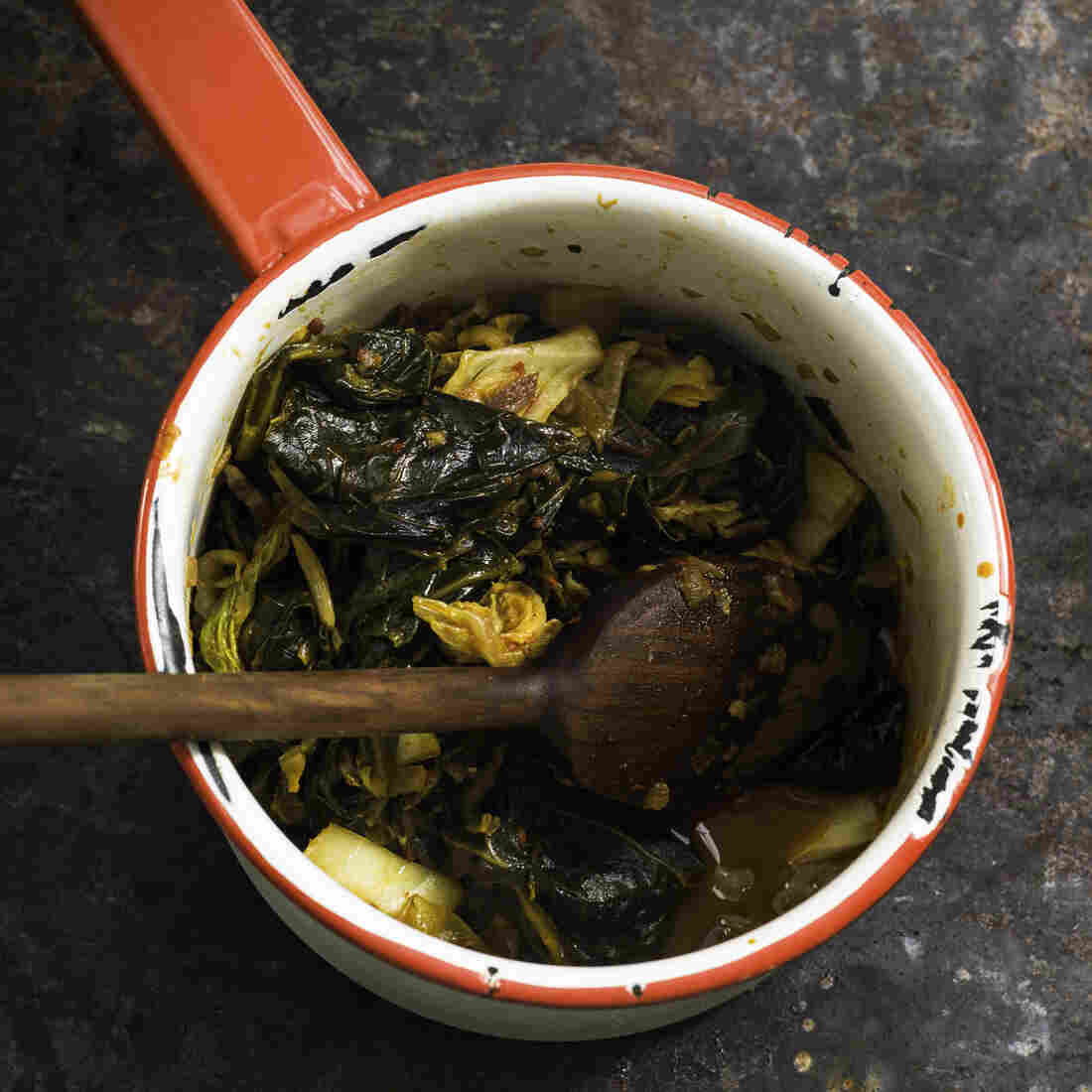 The most rewarding dishes to me are the ones that coax complex flavors from the humblest of ingredients. My first vinegary, salty bite of braised collards was a revelation. It took me back to the experience of eating cabbage kimchi, another precious dish that arose from poverty but has come to impress even the most sophisticated palates. I love these intense flavors from two cultures that are worlds apart, and somehow they work together harmoniously, as if they belong together.

1. Heat the lard and butter in a medium pot over high heat. Once the butter starts to foam, add the onions and sauté for 5 minutes, or until they get a little color. Add the ham and cook for 3 minutes, until it is crispy but not too brown. Add the collards, chicken stock, and soy sauce, cover, and cook over medium heat for 30 minutes, stirring occasionally. Taste the collards: They should be tender but still have a little chew to them.

2. Add the vinegar to the greens and cook for 1 minute.

3. Toss the kimchi into the pot with the greens. Mix together, and serve immediately, juices and all.

NOTE: If you're buying premade kimchi from an Asian market, pick one that is well ripened. Look for cabbage that is almost translucent and notice a smell. Ripe kimchi can smell pungent and sour even through a glass jar. 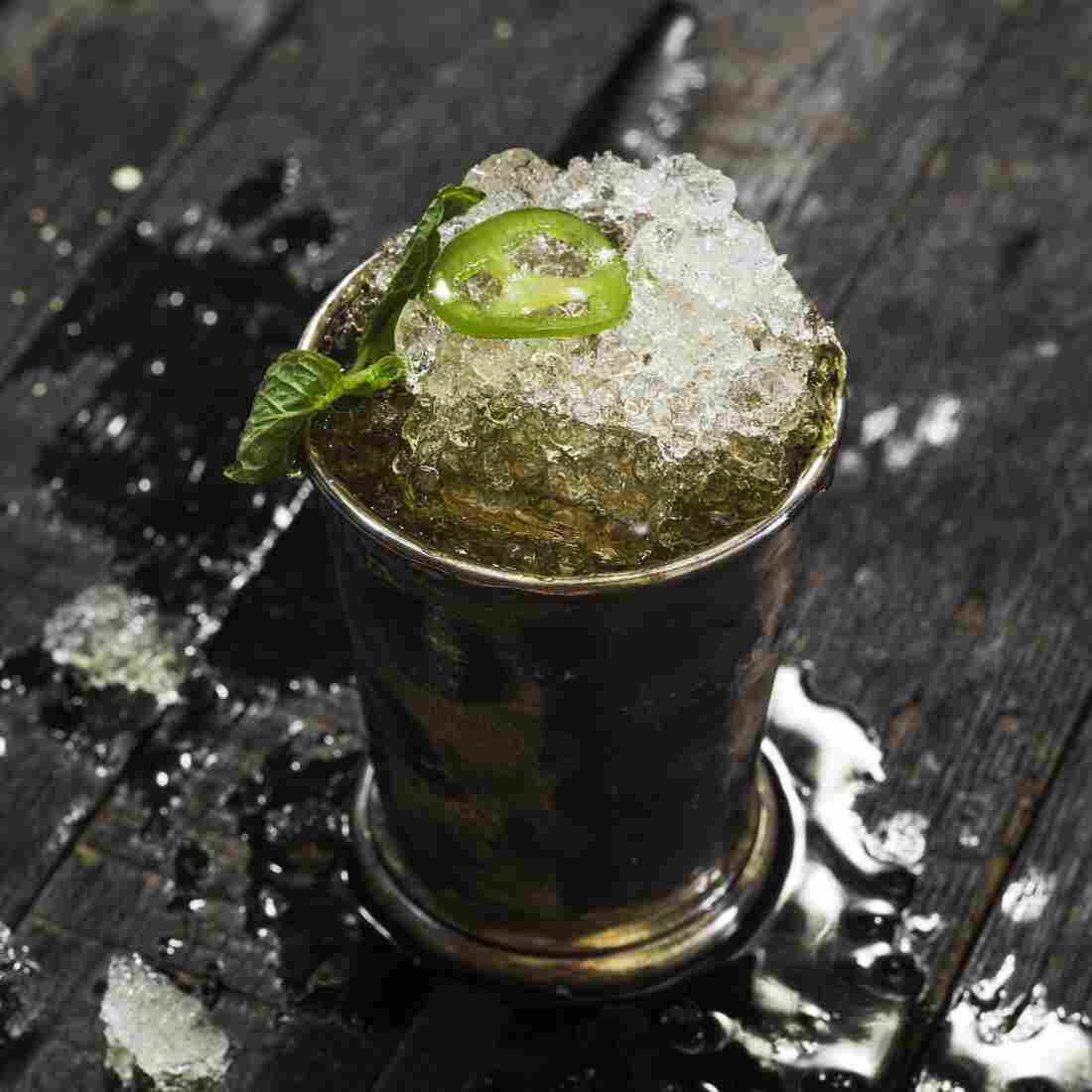 Mint juleps are a part of the Derby celebrations, and everyone partakes in the ritual. But, to be honest, most juleps I've had are overly sweet, cloying, and hard to finish. This is my twist on the julep: It's minty and verdant, with a kick of spice at the end that makes you want another sip. Serve this in pewter or silver julep cups, and drink it outside on a porch sheltered by a magnolia tree.

Place the mint leaves in the bottom of a julep cup, add the simple syrup, and gently bruise the leaves with a wooden muddler or a wooden spoon. Add enough crushed ice to fill the cup almost two-thirds of the way. Add the bourbon and stir gently, then fill the cup almost full with more crushed ice. Top with a splash of club soda. Garnish with the mint sprig and slice of jalapeño and serve immediately.

1. In a small saucepan, combine the water, sugar, and peppers and bring to a boil, stirring to dissolve the sugar. Turn off the heat and let steep for 20 minutes.

2. Strain the syrup and allow to cool. Keep in an airtight container in the refrigerator.