Accessibility links
Sea Of Syrian Refugees Threatens To Overload Jordan More than half a million refugees have crossed into Jordan, and the number is expected to rise rapidly. Jordanian officials say the influx is threatening the stability of the kingdom. 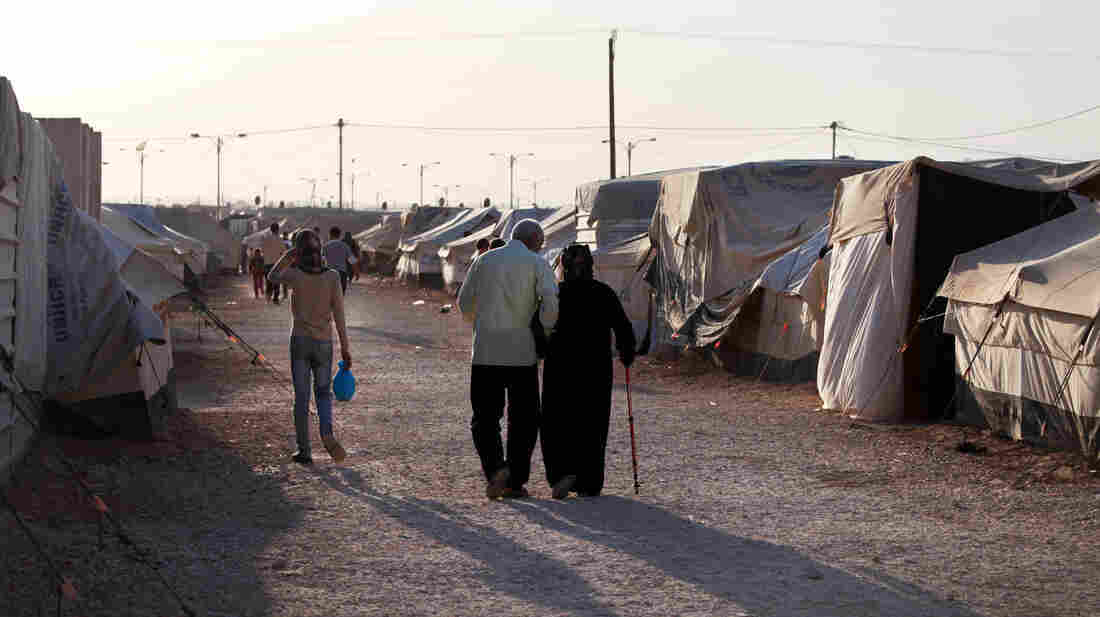 There are more than 100,000 Syrian refugees at the Zaatari refugee camp in Mafraq, Jordan, near the Syrian border. Mohammad Hannon/AP hide caption 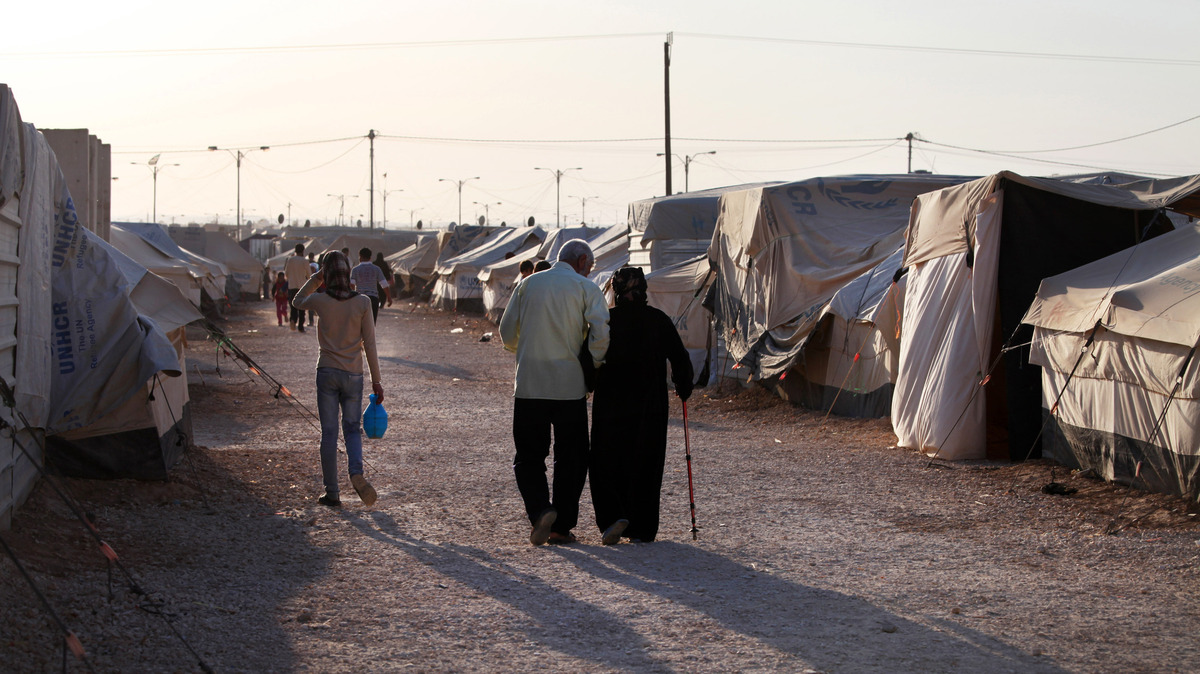 There are more than 100,000 Syrian refugees at the Zaatari refugee camp in Mafraq, Jordan, near the Syrian border.

Jordan's fastest-growing city lies in the middle of the desert, where the sand is so white that from a distance it looks like snow. There's little running water and not much electricity.

The name of this place? The Zaatari refugee camp, home to more than 100,000 Syrian refugees.

"This is a city — not one that anybody would want to create if they had a choice," says Caroline Gluck of Oxfam, one of the aid agencies working in the Zaatari camp. "It's certainly not urban planning at its best."

The relentless flood of Syrian refugees into the kingdom is now a threat to its security and stability, Jordanian officials say. More than half a million Syrian refugees have crossed into Jordan, and the number is expected to rise to 1 million by the end of the year. 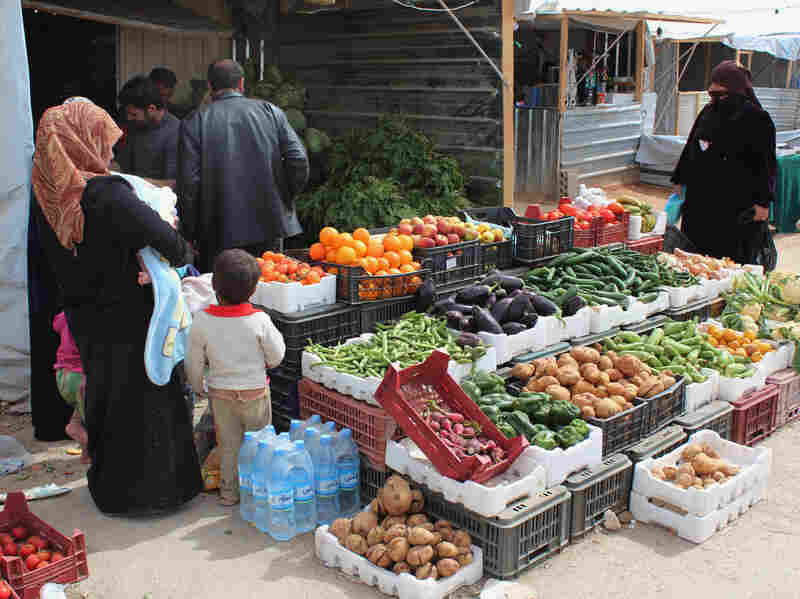 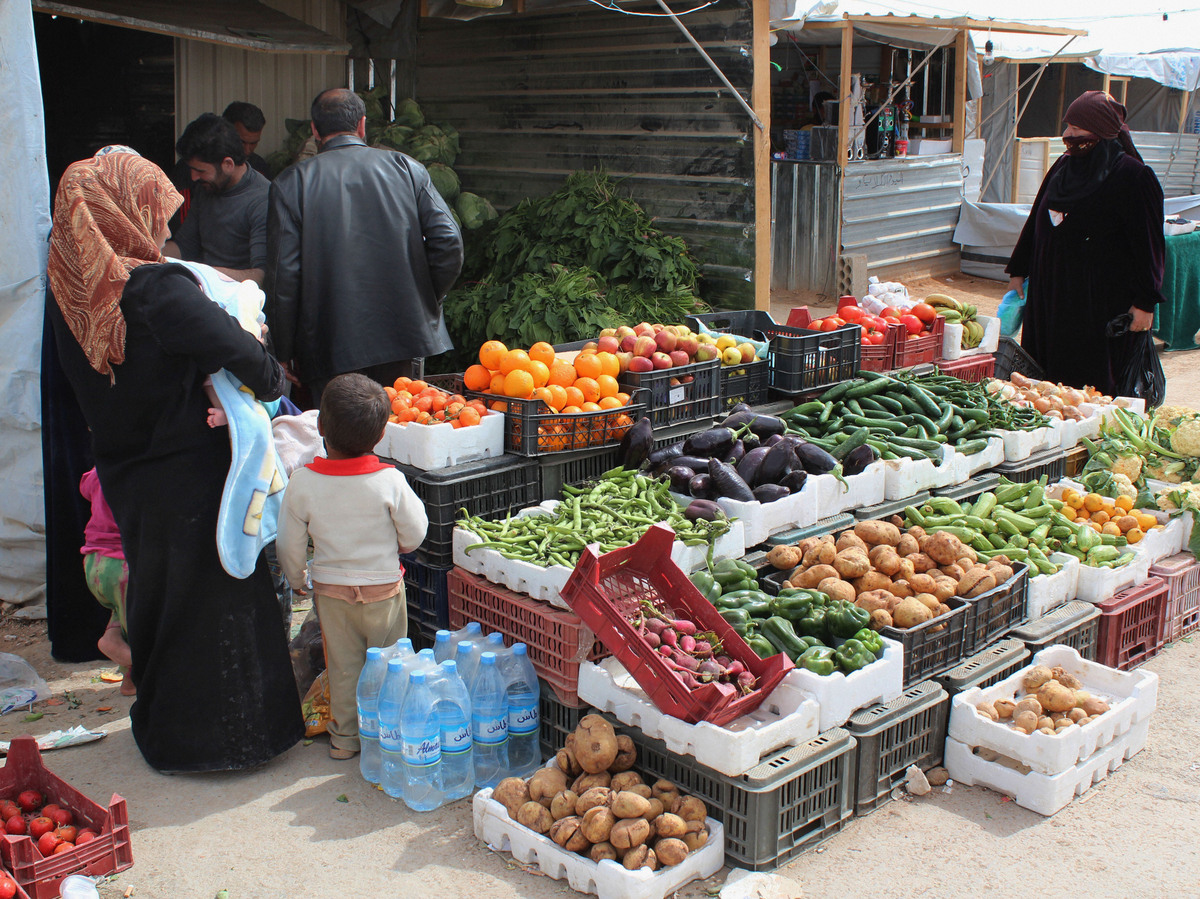 Syrian refugees shop at a makeshift grocery store at the Zaatari camp in March.

On Zaatari's main street, refugees have set up makeshift shops selling everything from wedding dresses to ice cream. There are grocery shops, and a tailor who produces curtains to keep out the dust.

Most refugees live in tents provided by the U.N. refugee agency. A few more-fortunate residents live in caravans — prefab houses with a floor and a door that locks.

Liqaa, 26, lives inside one of these caravans. (Her family is still in Damascus, and she only gives one name.) It's spotless, and she has a small library of books from her university studies. Five months pregnant, she lives with her husband. The Zaatari camp is now home, and where her baby most likely will be born.

She shows us her small kitchen. For many Syrians, cooking restores some dignity amid all the loss. When her husband's family had to flee Syria, she called and asked them to pack Syrian olive oil. When she cooks, Liqaa says, she can forget that she is a refugee.

Liqaa arrived in January and suffered through the snow and rains. Now, summer is fast on the way. The temperatures are already rising, along with the dust and flies.

Aid workers at Zaatari say they are overwhelmed by the job of providing services for a population that grows by more than a thousand every day, says Oxfam's Gluck.

"It's just a feeling that it's a flood that never ends. It's a deluge that you are trying to push back, and you're doing what you can," she says. "We are only providing the very basics here. They are getting the bare minimum."

The bare minimum is never enough. Fights and protests are common. Jordanian security forces are stationed at the camp's entrance and struggle to maintain order.

Jordanian officials also struggle to keep up with the numbers. Anmar Al Hmoud heads the steering committee for Syrians in Jordan.

In April alone, nearly 50,000 refugees flowed into Jordan from Syria, and that number rises every month. With its grocery stores, restaurants, hospitals and schools, Zaatari is "definitely much bigger than many cities in Jordan," Hmoud says.

Jordan's cities are bearing an even larger burden because the majority of refugees live in urban areas outside the refugee camps. Many of them are competing for low-wage jobs.

Now that summer is approaching, life for Syrian refugees and the Jordanians who host them is about to get worse. Jordan is one of the most water-stressed countries in the world. This rapid influx of refugees has already strained the water system to the breaking point, says journalist Jawad Al Anani.

Can you imagine, he says, how this influx is going to affect plans for health, education, social services and housing?

"I think the situation is becoming very difficult in Jordan," Anani says. "I call it a real threat."