Accessibility links
Movie Review - 'Iron Man' - A Metalhead Gets The Blues Wiseacre billionaire Tony Stark, uncharacteristically anxious since the events of 2012's The Avengers, must face down a domestic terrorist without backup from his buddies in the latest installment of the Marvel franchise. 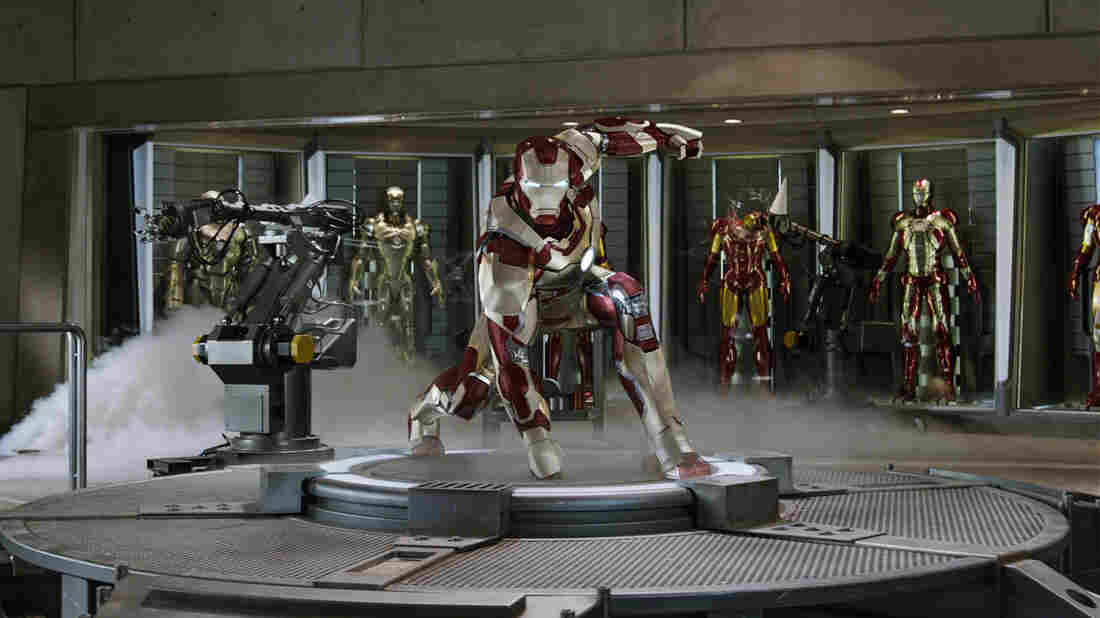 Rated PG-13 for sequences of intense sci-fi action and violence throughout, and brief suggestive content

Y'know, I think this bummed-out superhero thing is catching. Depressed Bat-guy, brooding Spider-dude, even the Man of Steel seems existentially troubled in previews of his most recent incarnation.

And smart-alecky Iron Man? He'd appeared inoculated by Tony Stark's reflexive snark from succumbing to a similar ailment — but even he's having anxiety attacks these days. Ever since that Avengers dust-up with those unpleasant aliens last summer, he's evidently been having trouble sleeping.

And now, with his super-buddies occupied elsewhere, our hero is on his own when a pontificating bad guy (Ben Kingsley) surfaces, all ornate robes and dirty hair and pretentious Asian-inspired name, with a retinue of suicide bombers and an affect that suggests he wants to be thought of as Osama bin Mandarin.

When his minions lay waste to a public square, blowing up a lot of innocent civilians — similarities to Boston presumably not intended, but hard to ignore — Stark's reaction is to issue an "If you're a man, you'll come after me, I'll leave the door unlocked" dare through the press. Complete with his address. (Not perhaps the wisest move a sleep-deprived, trigger-happy billionaire who wants to protect his girlfriend could do.)

Happily, Stark's been working on a nifty new Iron Man app that lets him bond with his body armor one kneepad at a time. There are still a few kinks — as the pieces careen his way, it looks like he's under attack, and until they're all synched up he can't fly — but his artificially intelligent pal Jarvis (voiced by Paul Bettany) is good at working them out in real time. For a while, at least.

Robert Downey Jr. has always put a you're-not-the-boss-of-me adolescent spin on Stark, so it's fun that Iron Man 3 gives him an actual adolescent to play against: a lonely kid named Harley (Ty Simpkins) who finds a low-energy, beat-up Iron Man in his garage and treats him a lot like Elliott treated E.T.

I'm gonna guess that was new writer-director Shane Black's idea; he's the guy who revitalized action movies a couple of decades ago with his script for Lethal Weapon, and who more recently revitalized Downey's career with Kiss Kiss Bang Bang, so it's reasonable that Downey wanted him around. His recipe here is similar — snappy dialogue, momentarily startling plot twists and lots of stuff blowing up. Stark spars amiably with Don Cheadle's earnest Col. Rhodes, puffs out his chest with Guy Pearce's villainous entrepreneur Aldrich Killian, and jousts puckishly with a freshly feisty Pepper Potts.

And with all those heavyweights on hand, it makes sense that the film makes much of character-based surprises — who knew Gwyneth Paltrow's Potts spent so much time at the gym, for instance?

It also has — and I don't think this will qualify as a spoiler — an entirely conventional blow-everything-to-smithereens conclusion. Looks like a fireworks display, it does, which is either Stark-scale hubris or merely appropriate for an early-May release that has every intention of hanging around theaters until the Fourth of July.