Accessibility links
After Years Of Hiding, 'Walking In Love' As Transgender For decades, Alexis Martinez, born Arthur, had to mask her transgender identity by "being as macho as I could be." But in a visit to StoryCorps, she tells her daughter how, with her family's acceptance, she's finally been able to live as a woman full-time. 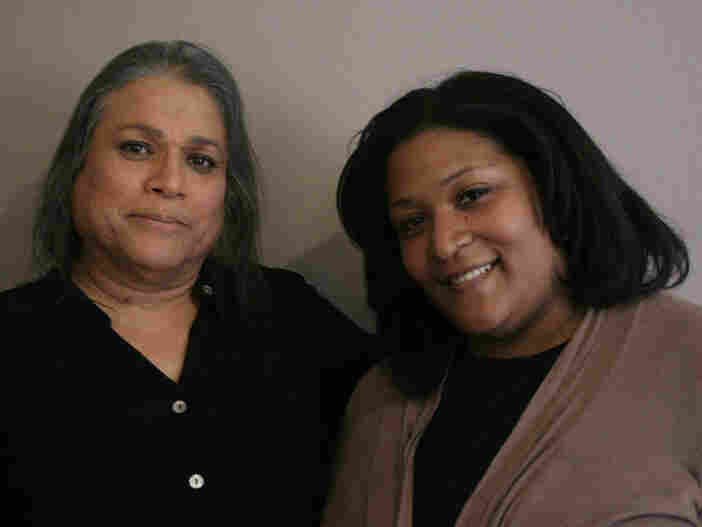 Alexis Martinez (left) worried that coming out to daughter Lesley as transgender would mean giving up any relationship with her grandchildren. But she needn't have worried. StoryCorps hide caption 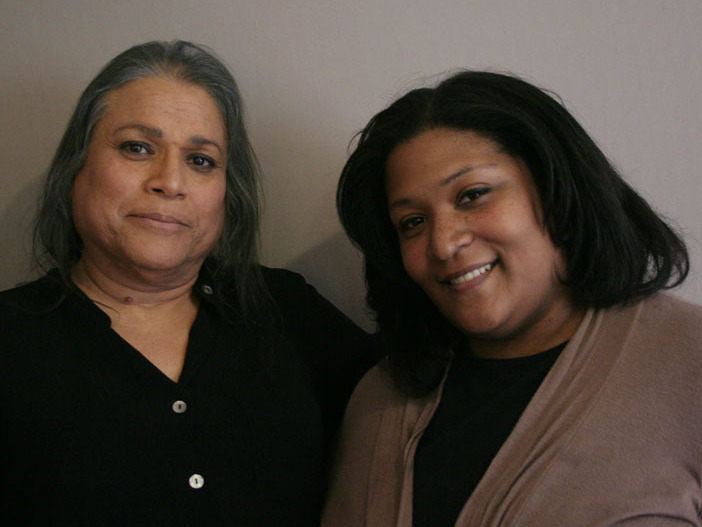 Alexis Martinez (left) worried that coming out to daughter Lesley as transgender would mean giving up any relationship with her grandchildren. But she needn't have worried.

Growing up in a rough housing project on Chicago's South Side during the early 1960s, Alexis Martinez had to hide that she was transgender.

Back then, her name was Arthur, Alexis tells her daughter, Lesley Etherly Martinez, on a visit to StoryCorps in Chicago.

"When I came out to my mom that I was transgender, I think I was 13 or 14," Alexis says. "And she called the police. And I always remember that when the police showed up, they just laughed and told her, 'You've got a fag for a son, and there's nothing we can do about it.' "

"So, I went as macho as I could be, to mask what I really was underneath," explains Alexis, now 62. "And by that time, I had become a member of a gang. People just didn't mess with me, you know, because they knew they had a fight on their hands.

"When I look back at it, it was almost schizophrenic because I would be wearing combat boots and blue jeans and a leather jacket. But underneath, I would have, like stockings and a bra," Alexis recalls. "And so, I remember it as a very dark period. I mean, I really didn't believe that anybody could love someone like me."

"I remember as a little girl that you would say these things like, 'Well, I know that I'm not loved,' " says Lesley, 32. "I just remember growing up like, 'Daddy, I love you.' It was just such an important thing for me to express to you how much you mattered."

One day, Lesley discovered some of her father's female clothes. "It was a big to-do," Lesley says. "It was sort of, you know, my uncovering the secret."

Alexis knew trying to cover up that she was transgender would mean a loss of trust with her daughter — so she told.

"It was like freedom," Lesley says. "Because now I could talk to you freely about being a girl, you know. And you're the one who taught me how to put on makeup."

"I was really torn between being a female role model and a dad," Alexis says. "And so, I said to myself, 'OK, well be the best parent. Whatever it takes, however I do it, you have to look out for your baby.' But one of the most difficult things for me was, I was always afraid that I wouldn't be allowed to be in my granddaughters' lives."

She needn't have worried. Lesley and her husband's acceptance, Alexis says, "blew that completely out of the water. ... One of the fruits of that is my relationship with my granddaughters. They fight with each other sometimes over whether I'm 'he' or 'she.' "

"But they're free to talk about it," Lesley laughs "You don't have to apologize. You don't have to tiptoe. We're not going to cut you off. And that is something that I've always wanted you to, you know, just know — that you're loved."

While Alexis' mother initially rejected her, she came to support Alexis as transgender and offered her support. And to Alexis, the openness with which her family can talk about her gender identity "is a miracle," she says.

"I live this every day now," Alexis says. "I walk down the streets as a woman, and I really am at peace with who I am. I mean, I wish I had a softer voice, maybe. ... But now I walk in love, and I try to live that way every day."