Accessibility links
Times Square's Naked Cowboy Wrangles Some Co-Workers Donning a cowboy hat, a guitar and little else, the Naked Cowboy has made a name for himself among New York tourists. But there's plenty of free spirit (and cash) to spread around: Fellow naked cowboys and cowgirls pay for a chance to make a buck under his brand. 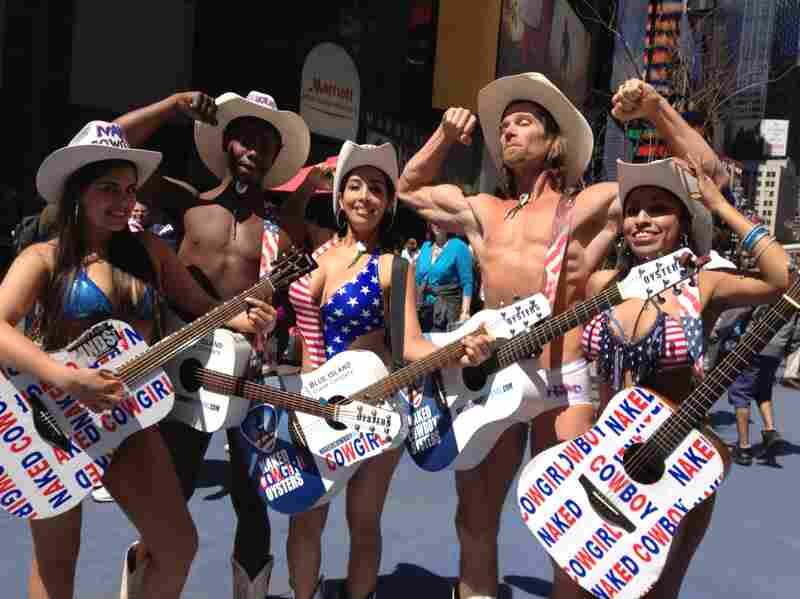 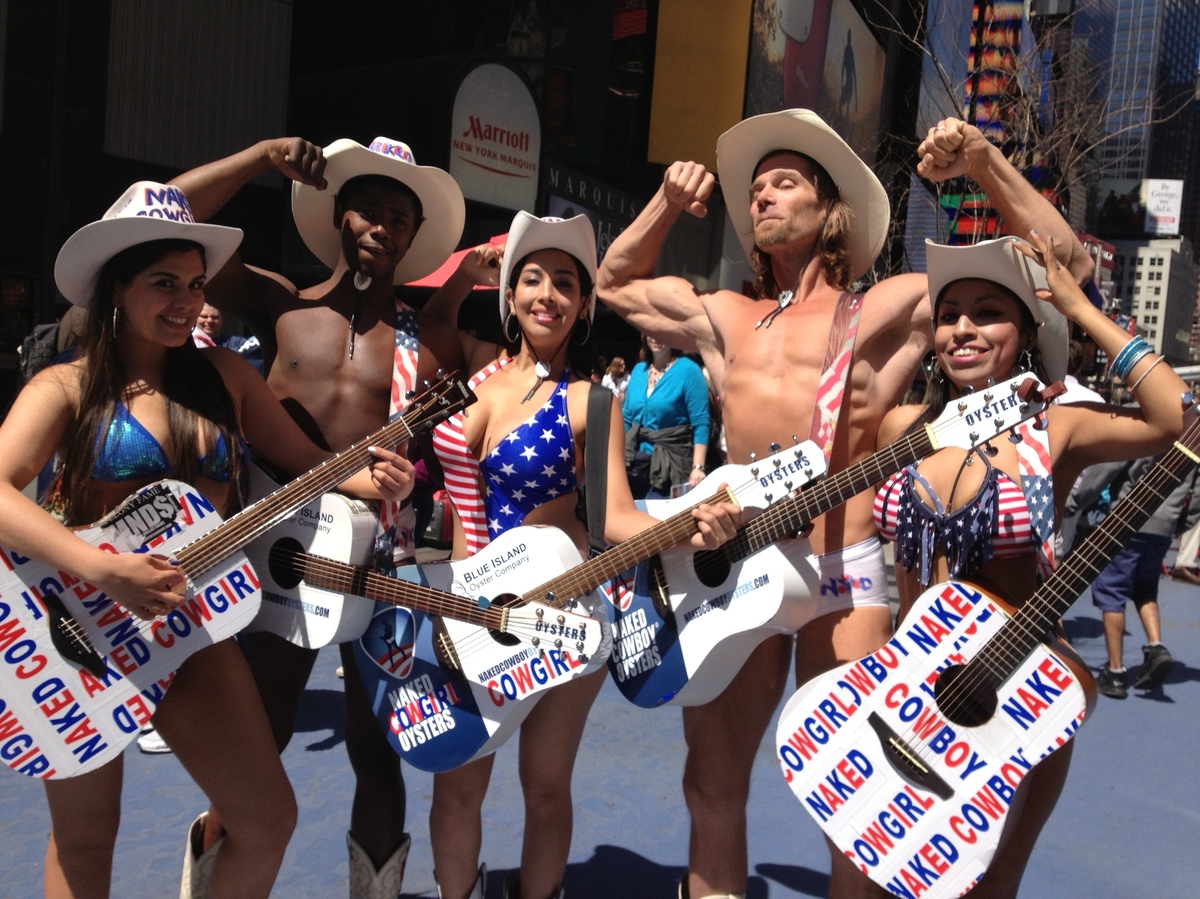 In the bustle and craziness of New York's Times Square on a busy afternoon or night, you will see scores of costumed figures: Batman, Elmo, the Statue of Liberty.

But for more than a dozen years, arguably the most original of these is the Naked Cowboy. His fame has now spawned a franchise, with eight different cowboys and cowgirls.

Almost anytime you go to Times Square, you will see the original Naked Cowboy in a white cowboy hat, white boots and white underwear briefs, with the words "Naked Cowboy" written across his butt. That's all he's wearing.

"I was born naked 42 years ago," Robert Burck says.

He describes himself as a former ne'er-do-well who picked up a self-empowerment book, read it 38 times and changed his life. He tried to do some modeling and did a photo shoot on California's Venice Beach, playing guitar in a full cowboy outfit.

"I was ignored the entire day on the boardwalk. Then the photographer ... said, 'Why don't you play in your underwear?' " he says. "I came back in my underwear the next day, made like $100, had people taking my pictures, a news crew just happened to be walking down the beach. They filmed me 'cause I was rocking the crowd with the same piss-poor, no-good music that I had since day one."

Burck traveled all over and got arrested 16 times, he says. Then someone suggested he go east to New York.

Now in Times Square, he holds a guitar and occasionally sings. A group of French tourists come up to him; the women giggle while he picks them up and they have their picture taken with him. Then there's a second photo, posing with their backsides. His guitar has a hole in it for tips. Then he's on to the next group.

The tourists love it.

Now the Naked Cowboy has help meeting the demand. The franchise charges the performers $500 a month, but on a good day or night, they can make $100 an hour.

Of course, none of them are really naked, but holding the guitar across their body can make you think the guys are completely nude.

"All of it, the whole thing, is all just an illusion," says cowboy Titus Gandy.

"It's my first week," says Karen Munos, who comes from Colombia. "I love this job, when the people say, 'It's the Naked Cowgirl, oh my God, take a picture, take a picture!' "

The cowboys and cowgirls change in a tiny office in a nearby garage. There's just a table and four chairs next to Burck's Escalade. They're getting ready for a wedding, right in the middle of Times Square.

The original Naked Cowboy, Burck, in the company of six other cowboys and cowgirls, officiates at the wedding of Greg Hardy and Victor Flores. He tells the wedding party and the many onlookers crowding around, "We stand here at the crossroads of America, the place where dreams both begin and die."

Before the naked torsos and underwear, vows and rings are exchanged; there are tears and moving moments.

There's a mix of something only slightly risque and so innocent here. The performers shout, call out and sing — sometimes off key — with a freedom and exuberance that's rare.

Although they may be in their underwear, among Times Square's mass of surging humanity, there is something about them that is simply sweet.