Accessibility links
Linney Mines 'The Big C' For Serious Laughs On Showtime's dark comedy series, Laura Linney plays a terminally ill cancer patient. The actress's own father died from lung cancer while the series was being made; her mother was a cancer nurse when Linney was young. These experiences, she says, inform her performance. 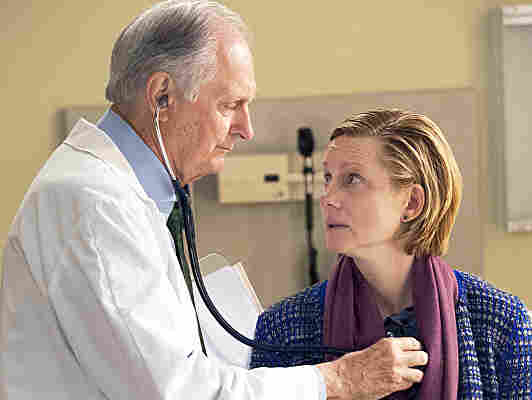 Laura Linney and Alan Alda star in The Big C, now in its fourth season on Showtime. Linney took on the role not long before her own father died of cancer. Showtime hide caption 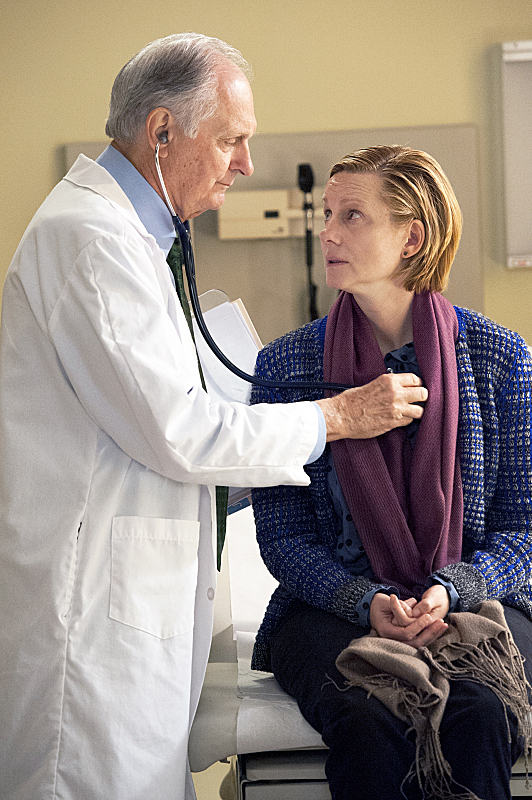 Laura Linney and Alan Alda star in The Big C, now in its fourth season on Showtime. Linney took on the role not long before her own father died of cancer.

From a young age, Laura Linney knew what she wanted to do with her life: act. There was no question.

She was a drama nerd in high school, and went onto Juilliard to study theater. But film acting was never the dream, and movie stardom definitely wasn't the goal.

"I was always completely intimidated by film," she tells Fresh Air's Dave Davies. "I was not the sort of person who grew up thinking, 'Oh, I want to be in the movies.' I loved movies; I just didn't think I particularly belonged there."

Linney, however, does belong on film — at least as much as she belongs on stage. She made a mark on TV in 1994, when PBS broadcast a well-received adaptation of Armistead Maupin's classic San Francisco novel Tales of the City -- but her big break came with the small 2000 film You Can Count on Me, in which she played a single mom in a small town. Linney's performance earned her the first of her three Academy Award nominations.

Since then she has steadily earned the respect of critics and audiences alike for her work in movies such as Mystic River, Kinsey, The Savages and The Squid and the Whale, written by her acquaintance Noah Baumbach.

These days she stars as Cathy Jamison, the terminally ill cancer patient at the center of Showtime's dark comedy series The Big C, on which Linney is also an executive producer. Her own father, the noted playwright Romulus Linney, died of lung cancer after she began work on the show, as she was struggling with questions about life and aging.

"The show came to me in a period of time ... when I was having real existential moments ... thinking about time, and the time that we have, and that it is limited," she says. "It just is.

"It's human nature to — thank God — not have [death] be the first thing you think about every single second, but there is a reality to it. And as I've been aging, and parents are dying and I've unfortunately lost friends who were way too young to go — you realize what a privilege it is to age. And that's not a message we hear a lot in the United States."

The show is now in its fourth and final season; Jamison's disease is beginning to take a physical toll on the character, and Linney has consciously changed her appearance — cut her hair, lost substantial weight — to reflect that reckoning.

"It was important to me that you actually see what's happening to her, that you see the cancer, and you can see how it changes people," she says. "There is something about what happens to the soul of a person as they are battling with an illness; the days when they're feeling weak, the days where they're strong, how that shifts and changes, what happens to the voice, how the body moves. Breathing. And ... more than seeing the disease, you see the life that's there, and how the life is coping with the challenges that are happening with the body."

On learning moviemaking on the set of Michael Crichton's Congo

"The acting was not terribly complicated, let's face it. There was not a whole lot to play there. So I thought, you know, I could learn what it is to be on a set. ... I was a bit of a pest, but I would go to the sound department and say, you know, 'Can I watch you guys for the next three weeks when I'm not on set? Can I sit with you? Can I see what you do? Can I see how this all works?' And then I went to the camera department, and then I went to special effects, so I would have a sense of what arena I was working in. And it made me realize what was my job and what was not my job as an actress, and how there was an entire army of people helping me out — and that I could take advantage of that, and lean on what they were offering."

On getting to know Noah Baumbach

"Noah's father and my father knew each other and would both go to MacDowell and Yaddo and writers' colonies together, so they were from the same sort of culture and the same sort of world. So we had that. I knew that world pretty well.

"When you're growing up in the '70s and you have parents who are artists — and you know how difficult it is for them to be parents and be the sort of artists that they were encouraged to be during that period of time culturally, it was not an easy mix."

"I'm well-known. I'm not the sort of person who walks out onto the street and people scream my name, but ... I don't have a purely anonymous life, so I can understand a little bit. And I have some friends who are very, very famous, and I certainly see how they, what they encounter on a daily basis and the moments where you sort of lose reality about your size in the world and how that can change your thinking and, consequently, your behavior. So I was really interested in discovering those dynamics about [Adams]."

On the sex scenes in John Adams

"What makes historical drama accessible are those moments of, 'Well, what do you do? What would anybody do? And then that connects you very quickly. You know, what do you do with the wig? And what happens when people who really love each other have been separated?

"You know, you go to bed. You do. That's what people who are passionate do. When they've been longing for each other and missing each other and the relief of being in each other's presence, you — you know — jump in the sack. So those sort of things that were truthful to us, that we were then able to work into the story."