Accessibility links
Chicago's Famed Field Museum Struggles To Dig Out Of A Hole The museum, already hard-hit by the economic crash, didn't meet projected fundraising and attendance numbers, and now must make up a $5 million budget deficit. The shortfall forced it to sell some items in its renowned collection. 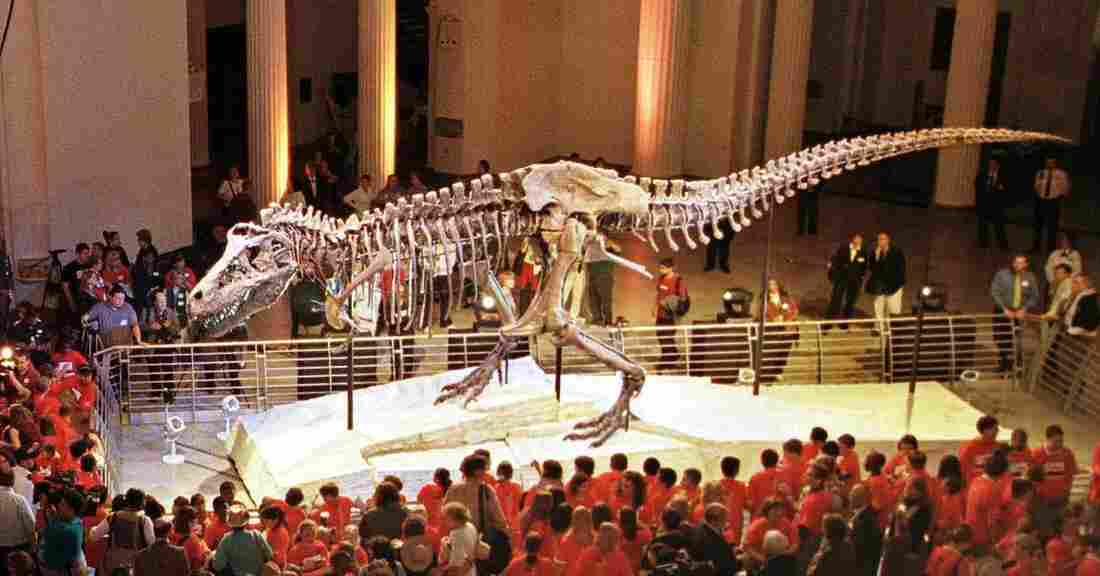 "Sue," the Tyranosaurus rex skeleton, is one of the most famous exhibits at Chicago's Field Museum of Natural History John Zich/AFP/Getty Images hide caption 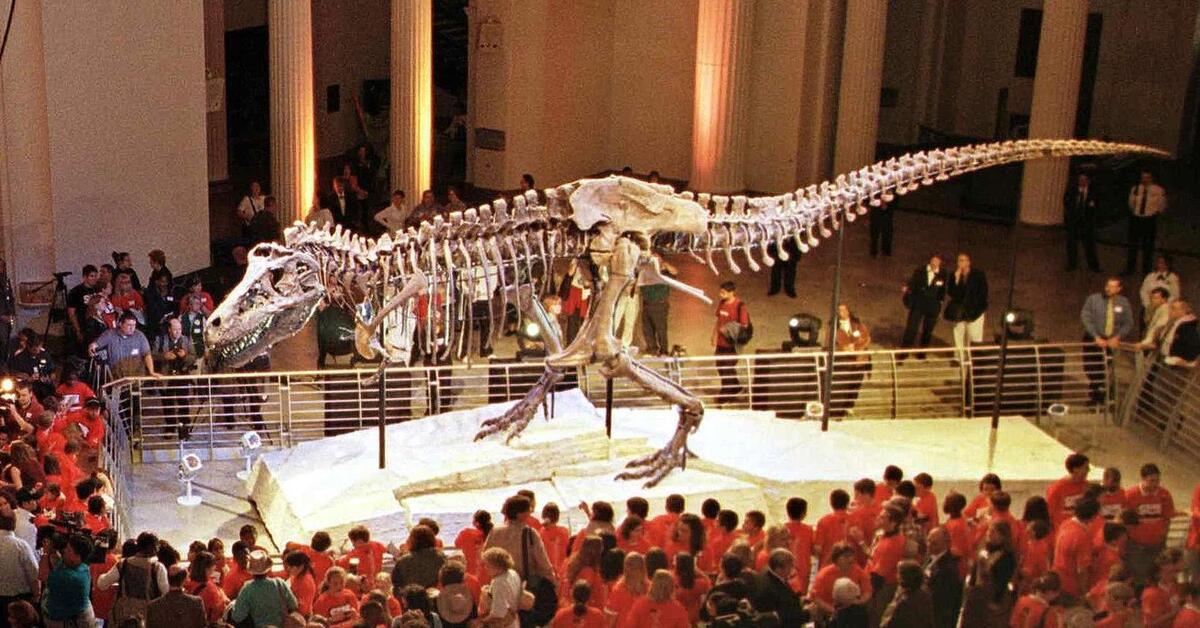 "Sue," the Tyranosaurus rex skeleton, is one of the most famous exhibits at Chicago's Field Museum of Natural History

The economy may be on the rebound, but many cultural institutions are still struggling to regain their financial footing. That's especially true for one of the country's most recognized museums — the Field Museum of Natural History in Chicago. Known internationally for its research as well as its exhibits, the Field Museum must pay off millions in bond debt — and toe an ethical line as it does.

The first thing you see when you enter the main hall of the Field Museum is Sue, the largest specimen of Tyrannosaurus rex around. "A woman fossil hunter found her, Sue Hendrickson," docent Jan Lariviere tells a crowd. "Sue and her dog were out fossil hunting and they saw the backbone sticking out of a ridge in South Dakota."

The Field Museum's encyclopedic collections range from dinosaur skeletons like Sue, to taxidermy exhibits that include the infamous man-eating lions of Tsavo that terrorized a railroad camp in Kenya more than a century ago. There are more than 20 million biological and geological specimens and cultural objects at the museum, but only a small portion are ever on display.

In 2002, the museum board approved issuing bonds to add an underground collections center and to update other areas of the Field's ornate neoclassical building. Joanna Woronkowicz, a research associate at the University of Chicago's Cultural Policy Center says back then other institutions were doing the same thing.

"Before the economic decline, for the arts and cultural field, it was a time at which it felt like you could do anything. You could plan a multimillion-dollar project and there wasn't a substantial risk of having to suffer any major consequences," she says.

But then the stock market tanked, and the Field's endowment took a hit, says Richard Lariviere — he's docent Jan's husband, and he also happens to be the museum's CEO. "If you think you've got to cross the street to get to the restaurant on the other side, and you get run over by a car you think — why did I ever want to go to that restaurant?" he says. "And we've been hit by a car like every other institution."

The Field had predicted big increases in attendance. That didn't happen, and it fell short of its fundraising goals. There have been layoffs and other cost-cutting, but the museum's budget is still $5 million in the red, and a good chunk of the budget is slated to pay off its bond debt.

"At the time that those bonds were issued, all the smart people were doing that and no one could have anticipated what would happen in 2002 and then again in 2008," Lariviere says.

He inherited the problems after becoming CEO late last year. By then, the Field Museum had auctioned off some of its collections. The sale included 30 paintings by George Catlin — a celebrated 19th century painter of American Indians and the Old West. Lariviere says curators had determined the paintings weren't essential to the Field's research mission, and the focus of the institution had shifted, "such that to keep items that you're no longer actively curating is to diminish their potential value to the public, to the scientific world, etc."

Later, the museum sold the rest of its Catlin paintings and earmarked the proceeds — more than $15 million — to pay for certain staff salaries and for buying artifacts. Selling off items in a permanent collection — or deaccessioning as it's called in the museum world — is fairly common, but there are generally accepted guidelines among curators as to what you can do with that money. "In no event should those proceeds be used for anything other than acquisition or direct care of collections," says Burt Logan of the American Alliance of Museums.

But Lariviere says the Field Museum followed those guidelines and will do so again if it needs to sell off anything else. "It's not the sort of thing where we would say, well, we need another $100,000 to balance our budget this year, so let's sell this box of ants."

The problem is that box of ants could have been part of a prized collection bequeathed to the museum with the expectation it would stay there forever. And that, says Carroll Joynes, co-founder of the University of Chicago's Cultural Policy Center, is what makes deaccessioning so tricky.

"It makes donors in the future fear for the security of the things they leave to the organization if, say, they leave a significant collection," he says. It also "seems to many to skirt with a breaking of a trust or a vow to take these things into permanent protection for future generations."

But the Field Museum isn't just a repository of stuff; its research operation is world renowned. Museum CEO Lariviere says the study of its collection of peregrine falcon eggshells, for example, helped ban the widespread use of the insecticide DDT.

Now, as one of the country's premier cultural organizations works to climb out of its financial hole, it faces the imminent loss of curators and scientists who have less than two weeks to decide whether to accept early retirement packages.