Accessibility links
This Bat Knows How To Drink The Pallas' long-tongued bat has a neat trick at the tip of its tongue — tiny hairlike structures that fill with blood and stand straight out. This turns the tongue into a nectar-slurping mop at just the right time. 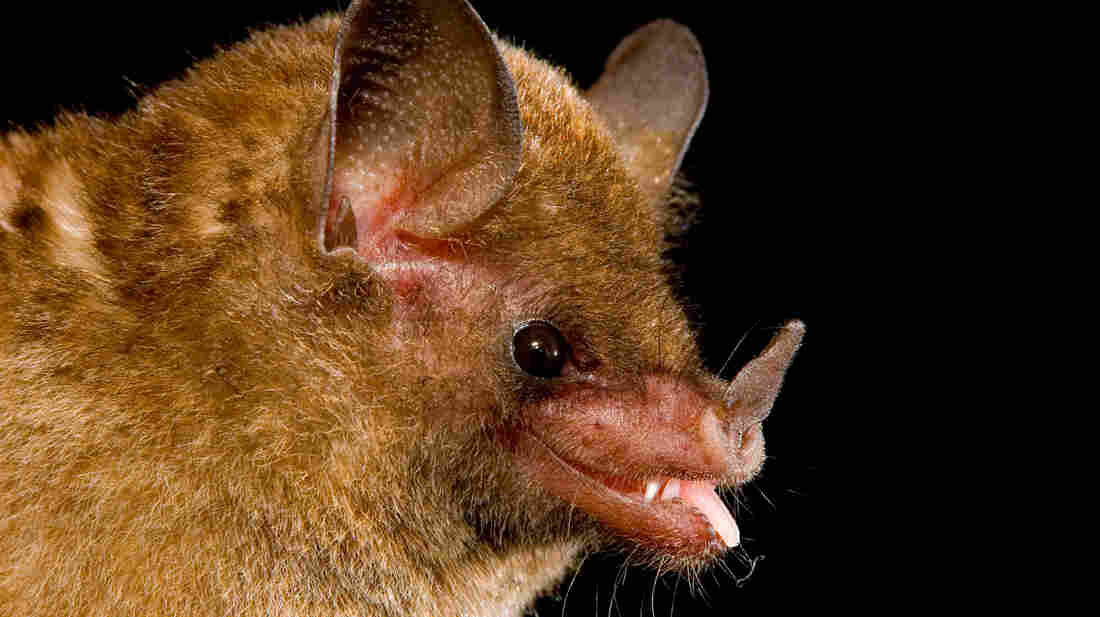 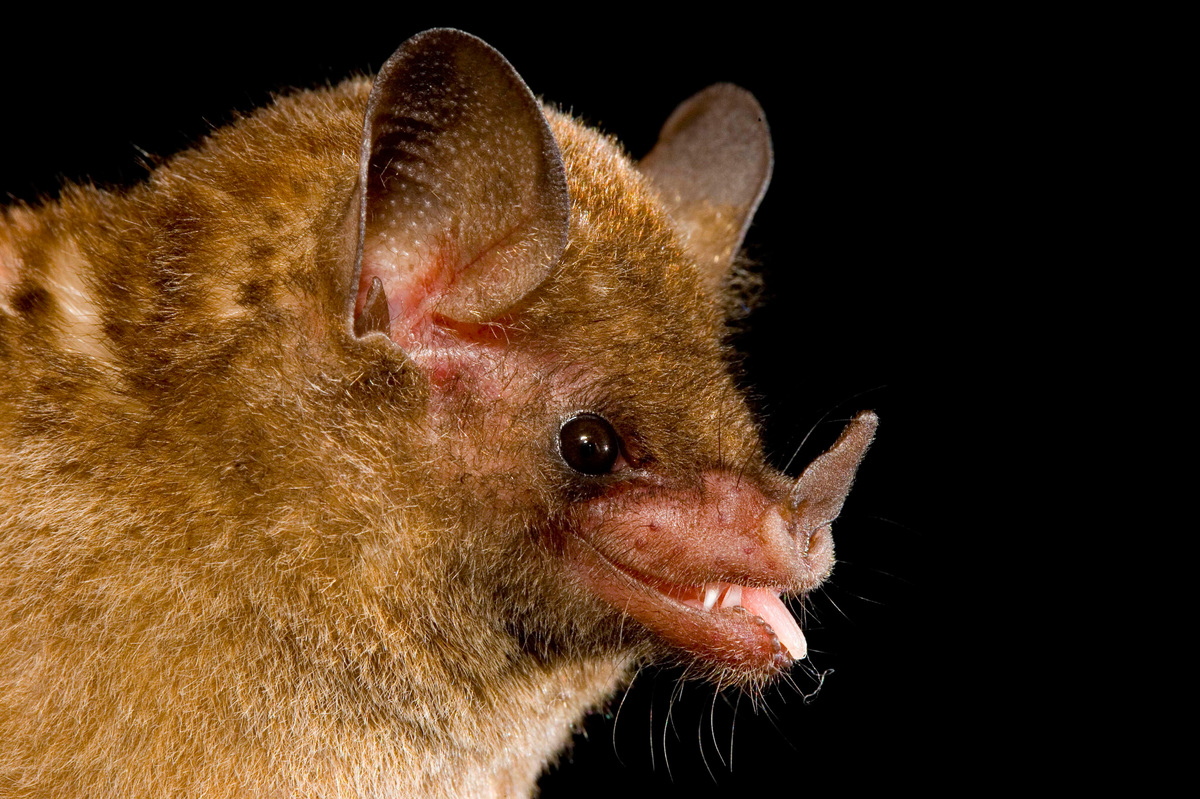 Imagine it's a hot day, and you're craving some cold lemonade. Someone offers you a glass, but with one condition: You can drink it only using your tongue, with no lips touching the glass. No straw.

But many animals — bees, butterflies, hummingbirds and bats — have tongues specifically designed to do this. All drink nectar from flowers using only their tongues.

In the latest issue of the Proceedings of the National Academy of Sciences, a team describes one species of bat's particularly elaborate nectar-scooping tongue. 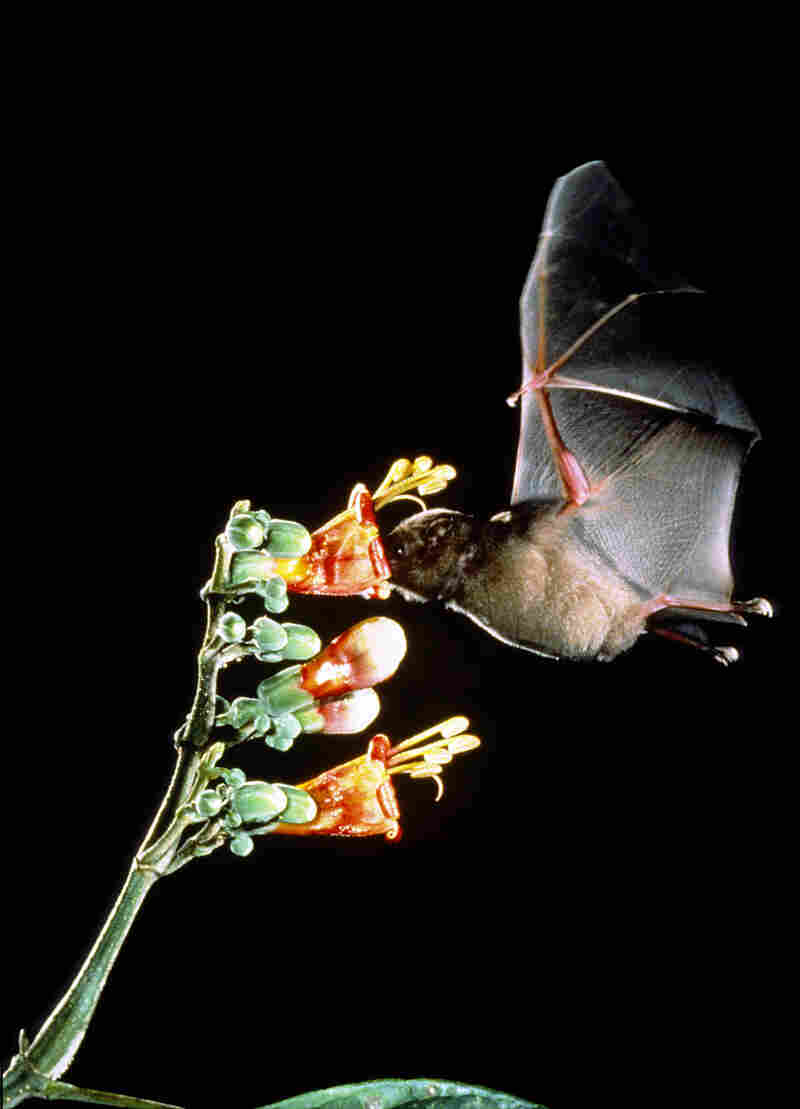 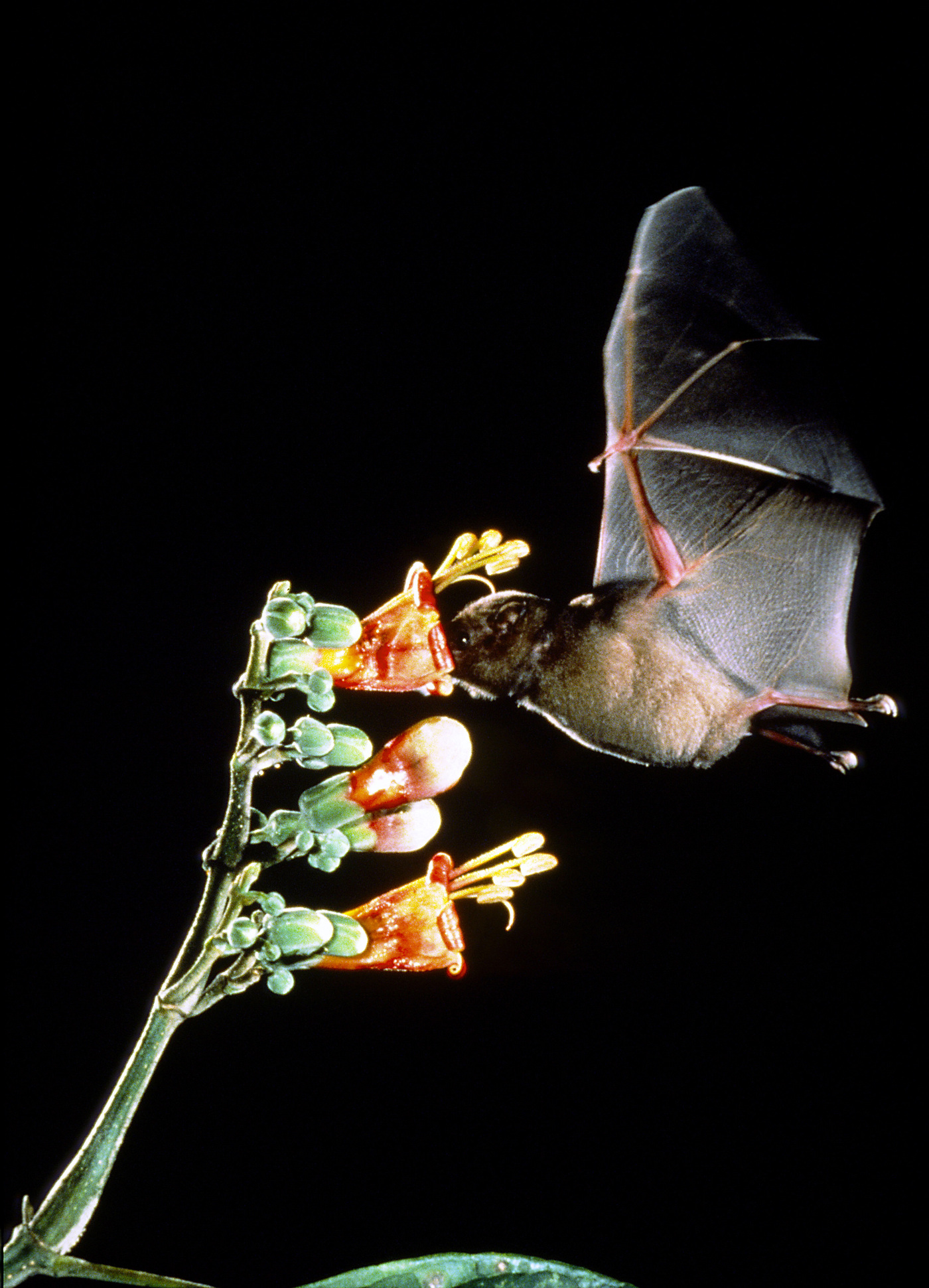 A high-speed photograph of a Pallas' long-tongued bat feeding from the nectar deep within a flower.

Pallas's long-tongued bats live in Central and South America. They're roughly 2 inches long, and they spend their nights going from flower to flower. And each bat has a tongue about twice as long as its head.

"They hover for just a few seconds over the flower corolla, and then they probe their tongue deep into the base of the flower tube and soak up nectar," says Cally Harper, the graduate student in ecology and evolutionary biology at Brown University, who led the study.

The challenge for all nectar feeders, Harper says, is to slurp up as much nectar as possible in the shortest possible time. That's because hovering over each flower takes a lot of energy, and to get enough food, the nectar slurpers have to visit many flowers in a single night.

Nature has come up with a variety of tongue designs, Harper says. "Hummingbirds have these bifurcated tongues that almost act like tweezers to tweeze up small droplets of liquid. And for butterflies, their tongues function almost like straws, where they have little pores at the tip of their tongue, where the nectar flows through those pores through the tube of that tongue."

Harper wanted to know how the Pallas's long-tongued bats scooped up sweet liquid. So she and her boss, Beth Brainerd, a specialist in biomechanics and evolutionary morphology, decided to film them in the laboratory, using a high-speed video camera.

The researchers knew the bat tongues were covered with little hairs, so they watched what happened to those hairs as the bats reached out for food.

When the tongue is inside the bat's mouth, they found, the hairs lie flat on the tongue's surface.

"And then very close to when the tongue is maximally extended, these hairs become erect," Harper says. "And when that happens, a space is created between each of the rows of hairs on the tongue tip. And nectar is loaded onto each one of those spaces."

It's like the bat's tongue is working like a mop, Brainerd says. "Not a sponge mop, but a stringy mop."

Brainerd says it turns out that each hair has blood vessels supplying it. When the bat sticks its tongue out to feed, the muscles of the tongue contract, pushing blood into the hair and making it stand on end. "The mechanism is like an active mop that's opening up to make more space for this liquid nectar to be collected," she says. 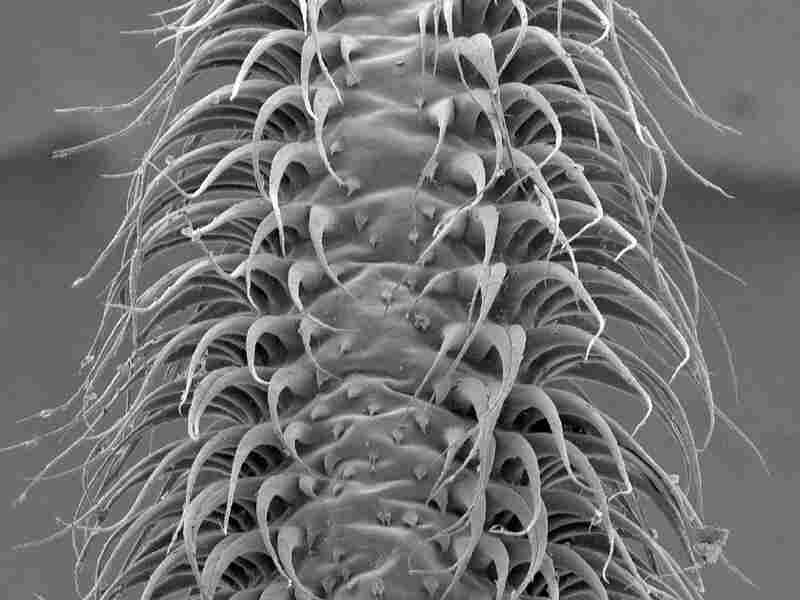 This scanning electron microscope image of the tongue of the Pallas' long-tongued bat shows how the hairs on the surface stand up to catch liquid, turning it into a "nectar mop." Courtesy of Cally Harper hide caption 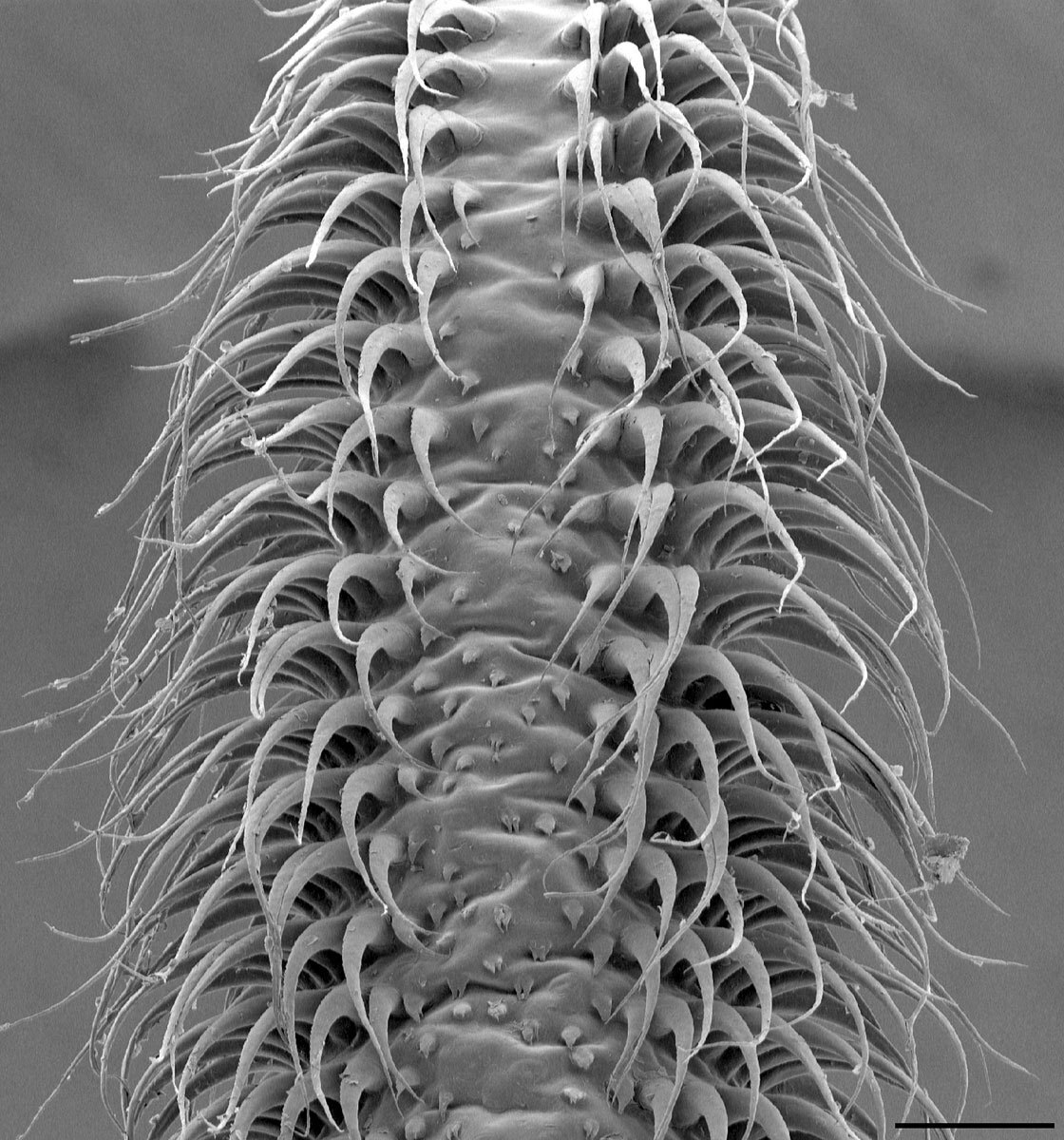 This scanning electron microscope image of the tongue of the Pallas' long-tongued bat shows how the hairs on the surface stand up to catch liquid, turning it into a "nectar mop."

Other creatures, including bees and cats, have hairs on their tongues, too.

But no other animal is known to use the tongue hairs in quite this way, says Kurt Schwenk, an evolutionary biologist at the University of Connecticut.

"What made it so cool and exciting is this dynamic attribute they have of popping out when the blood pressure gets high enough," says Schwenk.

He says that the study shows how under-appreciated tongues are.

"When you start looking at tongues in different animal groups, you see this amazing diversity of form and function that I think would shock most people."

And for that matter, Schwenk says even the human tongue is more remarkable than we give it credit for.

"I'd suggest that in the privacy of your own home," Schwenk says, "go into the bathroom and look in the mirror, stick your tongue out and start examining the incredible movements you can make with your tongue."

The human tongue may not be great for slurping up liquids, but it is perfect for the foods we eat and all the languages we speak.

Watch The Tongue In Action

This high-speed video shows a Pallas's long-tongued bat lapping up artificial nectar from a glass jar. At 52 seconds in, you can see a close-up view of the hairs on the tongue standing up to help draw the nectar into the bat's mouth.