Accessibility links
Joy, And New Hope, For All Families Of The Missing For parents of missing children, the world can be filled with the most horrific imaginings. Those imaginings were replaced by hope Monday when news broke that three young women were rescued in Cleveland. "We were like a bunch of little kids on Christmas morning," one mother said. 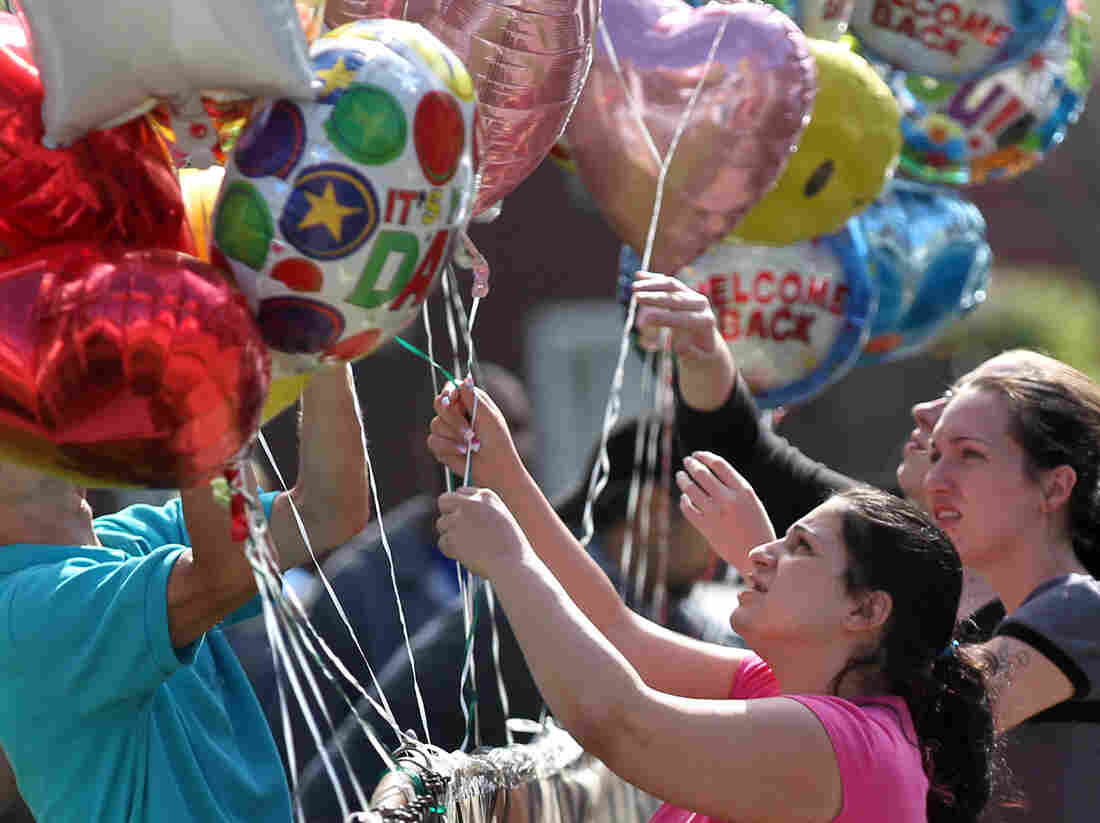 Balloons are placed Tuesday in front of the home of Gina DeJesus in Cleveland. DeJesus was found Monday, along with Amanda Berry and Michelle Knight, after disappearing nine years ago. Marvin Fong/The Plain Dealer/Landov hide caption 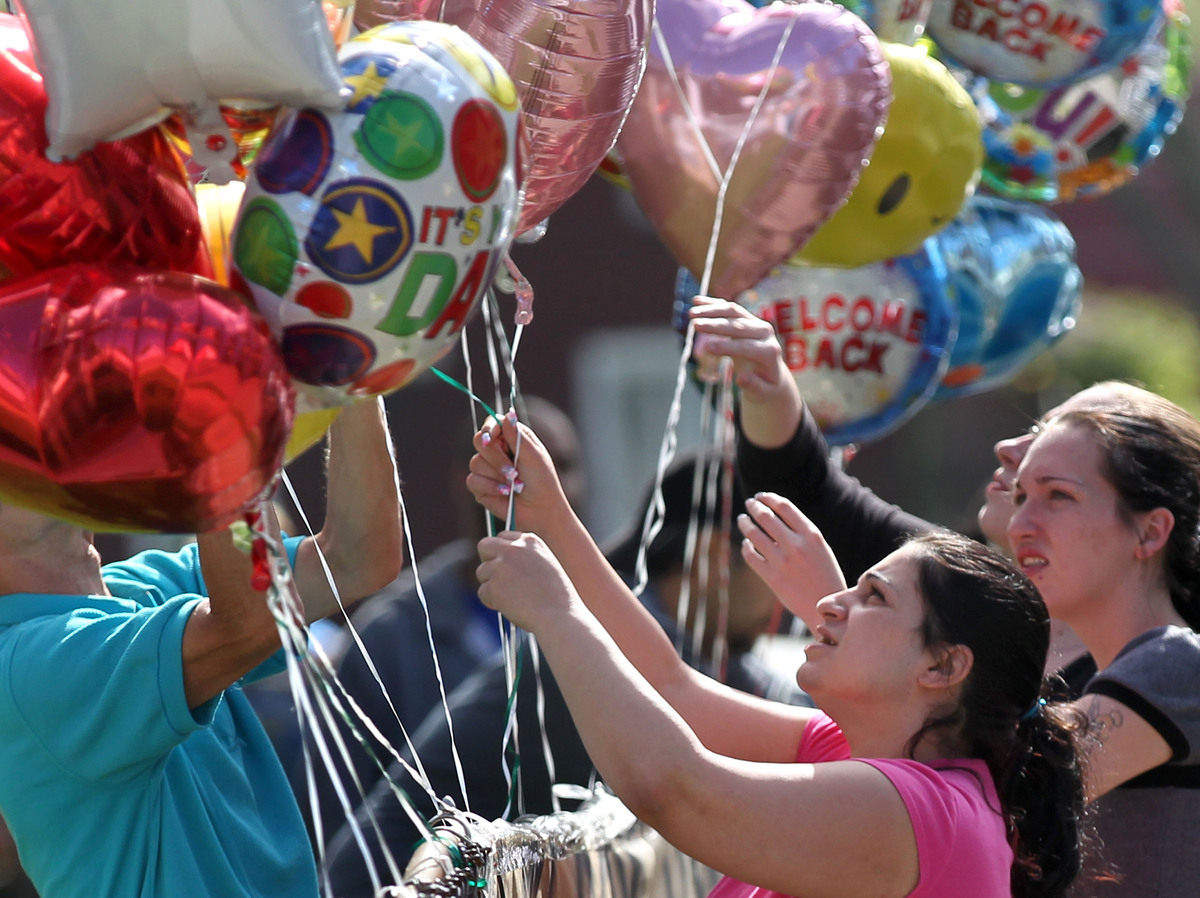 Balloons are placed Tuesday in front of the home of Gina DeJesus in Cleveland. DeJesus was found Monday, along with Amanda Berry and Michelle Knight, after disappearing nine years ago.

Parents in a networking group for missing children were at a strategy dinner Monday night, discussing the terrors of Internet exploitation and the need for better communication with law enforcement, when news out of Cleveland hit somebody's smartphone and reverberated through the hotel conference room.

"All of a sudden someone said, 'Oh my God,' and started reading the report," said Mika Moulton, president of the Surviving Parents Coalition.

She was among those attending the Justice Department-sponsored gathering called the Family Roundtable, which was being held in Florida.

"It was amazing. The gasps, the tears of joy, the overwhelming relief for these people who none of us really knew," Moulton said. "We were like a bunch of little kids on Christmas morning."

Day to day, the world for parents of missing children can be filled with the most horrific imaginings, the most desperate kind of hope.

Undated photos provided by the FBI show Amanda Berry (left and center). The photo at right has been aged progressed to show Berry at age 20. FBI/EPA/LANDOV hide caption

Just take a look at the website for the National Center for Missing and Exploited Children. Here, photos of the missing share space with a highlighted 24-hour tip line and links for testimony on sex trafficking, Internet pornography, international child abduction and more.

But Tuesday morning, the site had a bright red banner headline, "Recovered: After going missing more than 10 years ago, three women are now reported safe." And the tightknit community of those working, hoping and praying to be reunified with their loved ones, celebrated.

While the ordeal the young women have endured is not far from the parents' and activists' minds — particularly when news outlets like CNN already are calling the Cleveland house where the women were held a "House of Horrors" — the prevailing emotions were joy and, more importantly, new hope.

Wendy Jolley-Kabi, president of an umbrella organization for missing and exploited children's nonprofit groups, said she has spoken with several families since the Cleveland news broke.

"The overwhelming response is one of absolute joy and celebration, and absolute hope," she told us. "This is what we all work for every day — that the longer term cases are resolved, and to give hope to families out there in a darkness that's difficult to imagine."

Cases involving the discovery of long-missing children or young adults have taught families and advocates like Jolley-Kabi to expect that the victims have been hurt emotionally and in other ways, too.

Elizabeth Smart, who was kidnapped in Utah in 2002 and found nine months later, had been repeatedly raped by her captor.

Jaycee Dugard, kidnapped in California at age 11, also was repeatedly raped and bore two of her captor's children before escaping in 2009 after 18 years of captivity.

"No one can deny that healing won't be a long-term process," Jolley-Kabi said, "but what families often say is that, from their perspective, the most difficult part is the not knowing. Not being able to heal and move forward."

Smart, in comments on ABC's Good Morning America, urged the Ohio women to focus on the future. Dugard, in a statement, said the events of the past 24 hours suggest that families should not give up hope.

"Every time one of these things happens, for the missing-person community, it's a joyous reminder that this can happen, and people really do have to keep hoping," said Tony Loftis, whose daughter vanished for 12 days in 2011 before being found safe.

"I hope that it reminds every one of them that miracles do happen," said Loftis, whose experience led him to start Find Your Missing Child, which helps parents learn how to use social media to search for their children.

Patty Wetterling, who has become a nationally known child safety advocate since the 1989 abduction of her son Jacob, said the news out of Cleveland "makes me smile with every fiber of my being."

"I've been saying for 23 years that there are missing kids out there, and we have to find them," said Wetterling, who chairs the board of directors of the National Center for Missing and Exploited Children. "I love it when I'm right. You just can't ever give up."

Wetterling was in Washington on Thursday for the organization's annual Hope Awards, whose honorees this year include Jaycee Dugard. Wetterling said that although she hasn't met Dugard, she knows her mother from the early 1990s when they were both "searching parents" and appeared together on a television program.

Back in Florida, Moulton and other family members were celebrating not only the release of the women, and a six-year-old daughter of one of the captives, but also the serendipitous fact that they experienced the news together.

Most stayed up much of the night monitoring news reports. At their scheduled Tuesday morning general meeting, they hooked up television monitors so they could watch the Cleveland news conference live, together — a mother who has been searching for her daughter for more than a dozen years; a couple searching for nearly eight years; and parents like Moulton, whose story's tragic ending led her to a life of activism.

Mouton's 10-year-old son was kidnapped in 1995 and found murdered days later. He falls into the tragic category of kidnapping involving a stranger or slight acquaintance, what law enforcement calls a "stereotypical kidnapping" despite the fact that such cases are rare. According to the most recent studies, those cases end with the death of the child 40 percent of the time.

Statistics for 2012 released by the FBI's National Crime Information Center show that more than 497,327 children under age 18 were reported missing that year, including 10,191 listed as in potential physical danger and 4,547 characterized as potentially "involuntary" disappearances.

Before the news out of Cleveland, the Florida meeting was holding to its important but painful agenda. By Tuesday morning, Moulton said, there was a "whole different glow to everyone."

"It's a glorious day," she said. "There's not even a way to put into words the joy we feel."