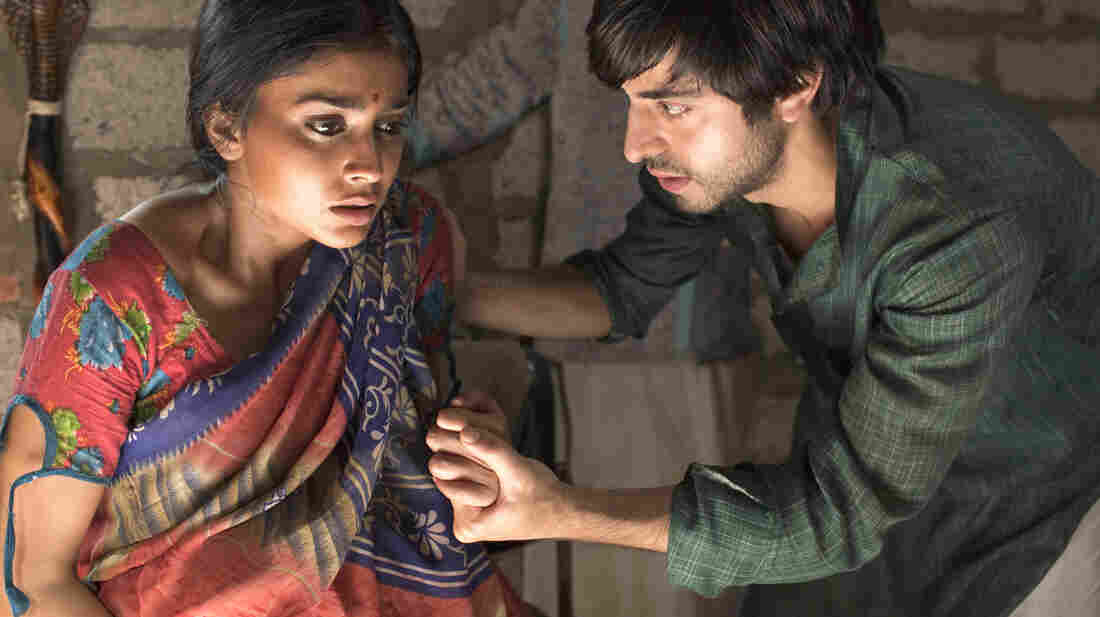 Parvati and Saleem (Shriya Saran and Satya Bhabha), born in tandem at the birth of independent India, are at the center of Salman Rushdie's novel Midnight's Children. Thirty years after the book's publication, filmmaker Deepa Mehta has committed the story to the big screen. 108 Media hide caption

In the 1970s, Salman Rushdie was an unknown writer living in London. He decided to return to the country of his birth and rough it across India on what he describes as "extraordinarily long 15-hour bus rides with chickens vomiting on our feet."

That trip inspired Midnight's Children, the Booker Prize-winning novel that many consider Rushdie's literary masterpiece. Now, more than 30 years after it was published, Midnight's Children arrives on the big screen in a glittering film adaptation from Oscar-nominated director Deepa Mehta.

The film charts the story of Saleem Sinai, a young man born precisely at the stroke of midnight on Aug. 14, 1947 — the moment India and Pakistan came into the world, dividing a former colony into two nations free from British rule. In Rushdie's words, Saleem Sinai's life is "handcuffed to history"; and the novel explores his tumultuous journey across decades as characters' lives tumble and rise alongside their nations.

"That is one of the great classic subjects of literature," Rushdie notes. "What does history do to the individual, and what can the individual do to history? Can we change the world we live in, or are we simply tossed and turned on the storms of history?"

Anupama Rao teaches that subject at Barnard College, and she says Rushdie's writing "opened up South Asia to a number of people who hadn't thought about that region as having indeed this kind of extremely complex history but I think also this complex culture."

Rushdie also complicated the idea of the English-language novel, infusing his pages with Hindi words and stewing the narrative in magic realism. Indian-born filmmaker Mehta says she still remembers the high she felt as she turned the last page of a novel that seemed to capture her generation's story.

"That's what happens when you read a book and it moves you, or it infuses you with some kind of enthusiasm," Mehta says. "You glow internally, because you feel you've sort of imbibed something that's mind-blowing."

Mehta lives in Canada now, and her films often explore the complexity of South Asian history and society. She says Midnight's Children has remained an inspirational work for her, not least in how seamlessly it marries the historical with the personal.

Three years ago she hosted Rushdie, who's a friend, at a dinner in Toronto. When the conversation turned to film rights, she was shocked to discover that he was open to selling her the rights to his most acclaimed novel for as little as $1.

A Screenwriter With Just Enough Disrespect For The Material

"I've always responded very much to passion, and it was really Deepa's passion for the subject that made me feel that OK, maybe we could have a go at this again," says Rushdie, who'd written an ill-fated televised adaptation for the BBC years before. "It wasn't just that this was a book that she wanted as a job to make a film of; I thought that the book had come to mean a lot to her, and she would make a personal film." 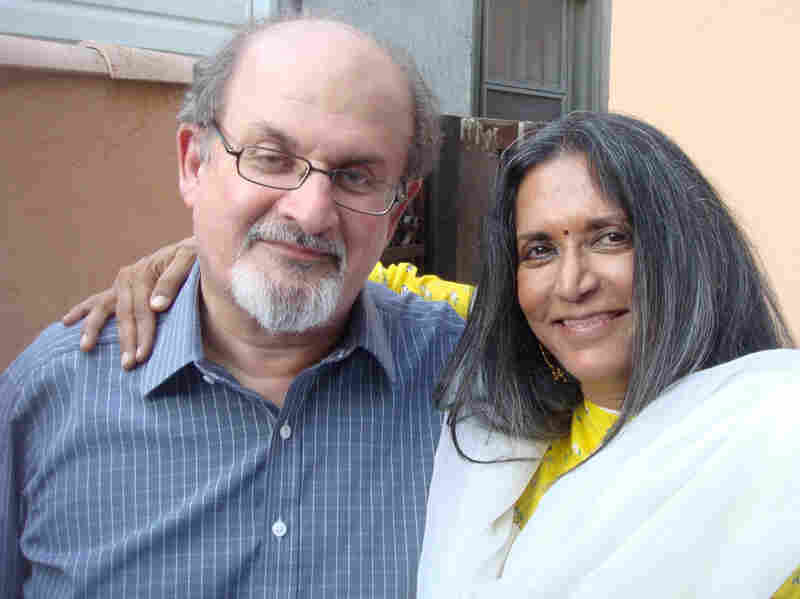 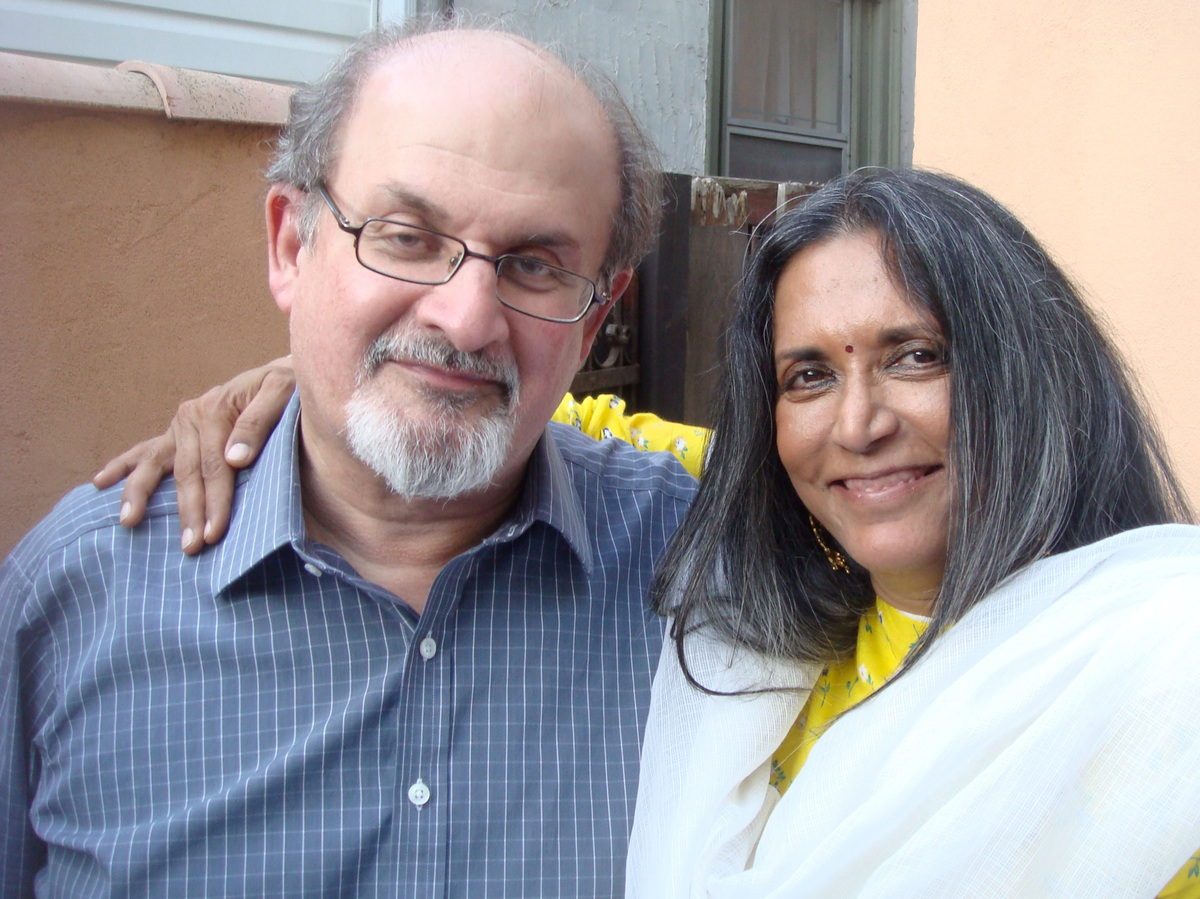 Mehta and Rushdie, both Indian-born expatriate artists acclaimed in their disciplines, share an appetite for lyrical, vividly colorful storytelling.

Mehta knew it wouldn't be easy to condense and visualize a 500-page novel that spans three wars, charts the lives of dozens of characters and covers decades of tumultuous history. So she asked Rushdie to personally adapt and edit the novel for the screen.

"He really didn't want to write the screenplay," Mehta says. "I had to absolutely twist his arm — literally — to say he must write it, because I knew very early on that ... he could be sort of ... disrespectful, let's say, to his work [as] few other screenwriters could be."

Beyond the script, Mehta had to re-imagine Rushdie's storytelling moods for the screen. She commissioned the British-Indian composer Nitin Sawhney to write original, semiclassical Indian music for the score. She focused on the novel's language in visual terms — as sets, costumes and colors.

"For me it's always been, 'What emotional color does this script evoke?' And I felt there was really a lot of red, green and blue ... fertility, blood and darkness."

A Shared History, And A Similar Distance From Home

A dark, complex trilogy of earlier films about India — Fire in 1996, Earth in 1998 and Water in 2005 — earned Mehta international acclaim. Two of those films were also condemned and attacked by Hindu fundamentalists, who burned down sets and cinemas showing her films. Rushdie's own legacy is likewise tied forever to extremism, courtesy of the fatwa of 1989, when Muslim fundamentalists threatened his life and forced him into years of hiding. But Mehta says that in their collaboration on Midnight's Children, they didn't dwell on that shared past.

"Maybe because we've both been through it," she muses. "We never spoke about it because it's such a drag, it's such a downer. ... Why do you want to share in such misery?"

Today both writer and filmmaker live outside India, and say that distance helped them return to the novel and objectively look back at that time in history.

"Objectivity for me, or stepping out of the frame for me, has meant to me that I can look at something that is really important — like India, the place of my birth and the place where I grew up ... with a certain amount of distance," Mehta says. "So it's not being handcuffed to history as much as having the opportunity to take off the rose-colored glasses."

Midnight's Children was released in India earlier this year, and both Mehta and Rushdie went back to unveil the film. And for Rushdie, who started that journey as a young, unknown writer backpacking across India, the premiere in his hometown was especially poignant.

"There I was, this boy from Mumbai, which is after all the great movie city of India ... growing up to write a novel which took its inspiration from the spirit of that city," he says. "My being able to bring it back to the city as a film, it did feel like an act of closure. It felt like bringing a big circle back to its starting point."