Accessibility links
In Newsrooms, Some Immigration Terms Are Going Out Of Style In April, the Associated Press decided the word "illegal" should only be used to describe actions, not people. It's one of several major news outlets that have been reconsidering how to refer to people who are in this country illegally. 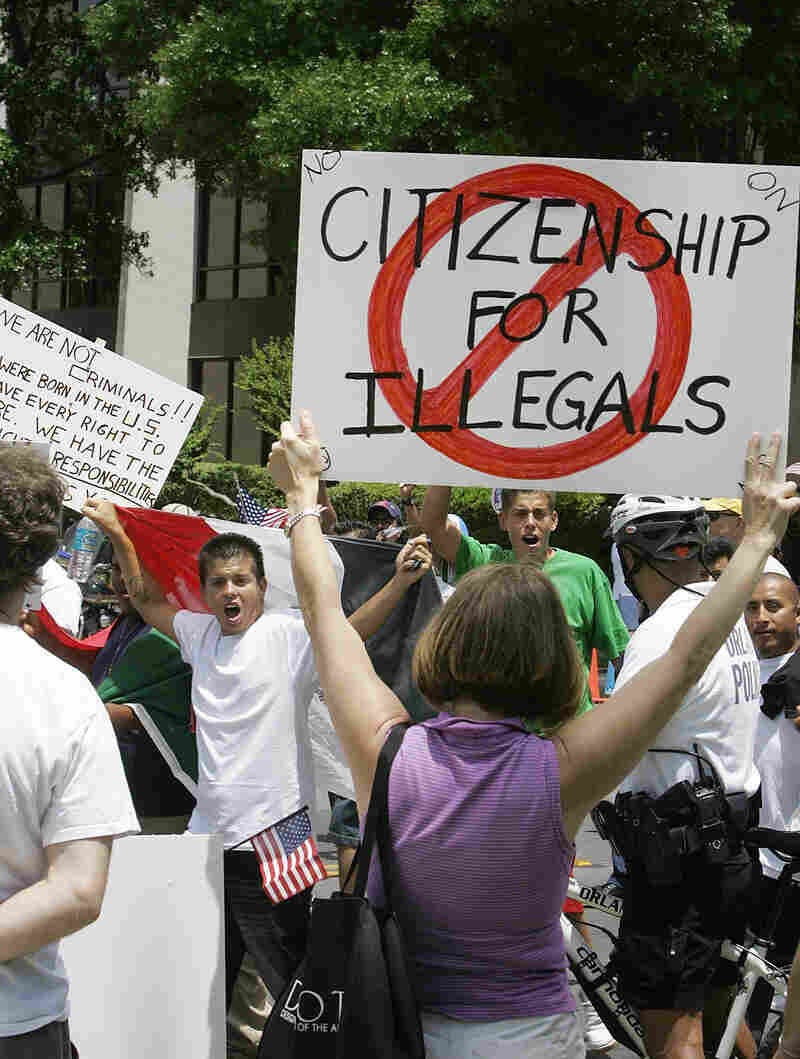 Protesters demonstrate in downtown Orlando, Fla., on May 1, 2006. Most news outlets have long abandoned the use of the term "illegals." Roberto Schmidt/AFP/Getty Images hide caption 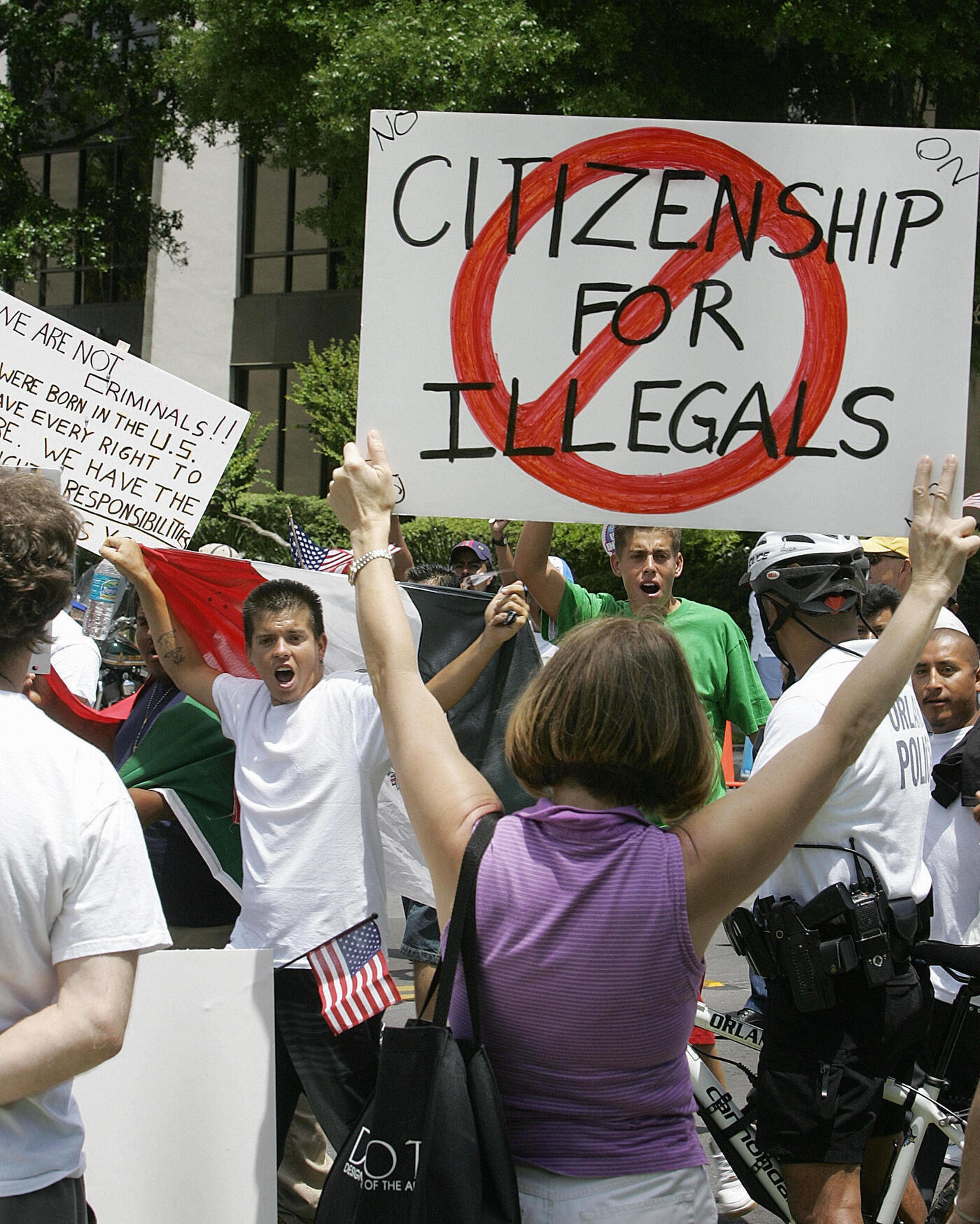 Protesters demonstrate in downtown Orlando, Fla., on May 1, 2006. Most news outlets have long abandoned the use of the term "illegals."

Journalists make choices all the time that influence our understanding of the news — the choice of what stories to cover, which people to interview, which words to use. And major news organizations have been reconsidering how best to describe a group of people whose very presence in this country breaks immigration law.

News organizations as institutions often decide which terms to use in describing contentious subjects, then codify them in what are called stylebooks. They are subject to change just as society's views change. Just consider terms used to describe race in this country.

"It goes back to the Garden of Eden," says former New York Times and Washington Post reporter Roberto Suro. "Naming is the first power that humans got and it's still the most powerful that the human intellect received from its creator."

Now a scholar at the University of Southern California, Suro says that when it comes to describing people who are in this country illegally, the media are reflecting the times.

"News organizations are kind of struggling. I believe they are reflecting what's happening in society, where what we see in the political arena is a society that's trying to sort out how to think about these people and where they belong in our society."

Moving Toward A Fuller Description

As Congress debates the merits of creating a quicker means for people here illegally to obtain citizenship, several major news outlets have shifted their policies. In April, the Associated Press decided the word "illegal" should only be used to describe actions, not people — the issue of illegal immigration, rather than illegal immigrants.

At the Los Angeles Times, Assistant Managing Editor Henry Fuhrmann noticed reporters were writing articles where they did not use the term "illegal immigrant" even though it was preferred.

Fuhrmann oversees standards as well as the paper's copy editing desk, which enforces those standards.

In Immigration Debate, 'Undocumented' Vs. 'Illegal' Is More Than Just Semantics Jan. 30, 2013

"I thought we either had to affirm our style and try to apply it more regularly or in fact listen to the voice of the newsroom as we're listening to the voices outside the newsroom and say maybe it was time for a fresh start."

Fuhrmann himself is the son of an American father and a Japanese mother. He was born in Japan while his father served in the Navy, and years after moving to the U.S. his mother became a naturalized citizen. He recalls asking one reporter which terms he used in his coverage.

Mickey Kaus of the right-of-center website The Daily Caller has been critical of pushes to relax immigration restrictions. He says journalists are bending to ideological pressure.

"It's heavily politically loaded," he says. "I think 'illegal immigrants' is really quite a clear phrase. It's so clear that President Obama used it when he was trying to make himself clear in a speech. He later apologized, but the fact that he used it implies that it is a very useful shorthand, as are all words, for what you're talking about."

Kaus says news organizations are tying themselves in knots to not offend Latino activists, Latino consumers and the advertisers who hope to reach them.

"Now we have this theory that no one word can possibly describe the inevitable state of being, whatever it is. Maybe it should be an unpronounceable symbol like Prince, 'cause we don't dare give it a name. Language is supposed to give things names and I don't think 'illegal immigrant' is that offensive a name."

Failing To Sidestep The Debate

The Fox News Channel has some particularly interesting contortions on the subject. In late April, while filling in for Sean Hannity, Monica Crowley went old-school and used the term "illegals." Fox News' preferred term is "illegal immigrant," though anchor Shepard Smith will sometimes use the phrase "undocumented immigrant." In March of last year, Bryan Llenas, a reporter for Fox News' sister website, Fox News Latino, told Fox viewers why the issue is charged for Hispanics.

"Nine in 10 support the DREAM Act; 85 percent support undocumented workers working in this country. And if you ask them whether they prefer the word 'illegal' versus 'undocumented,' a majority of them believe that the word 'illegal,' the term 'illegal immigrant,' is offensive."

That's why Fox News Latino doesn't use it. USC's Suro says journalists are attempting to sidestep the raging political debate — but they can't avoid getting swept up in it.