Accessibility links
At The Movies, A Swirl Of Style And Substance Special effects date back to the dawn of film, but with today's tools moviemakers can put pretty much anything on-screen — which has NPR film critic Bob Mondello thinking about how movie style affects movie substance. 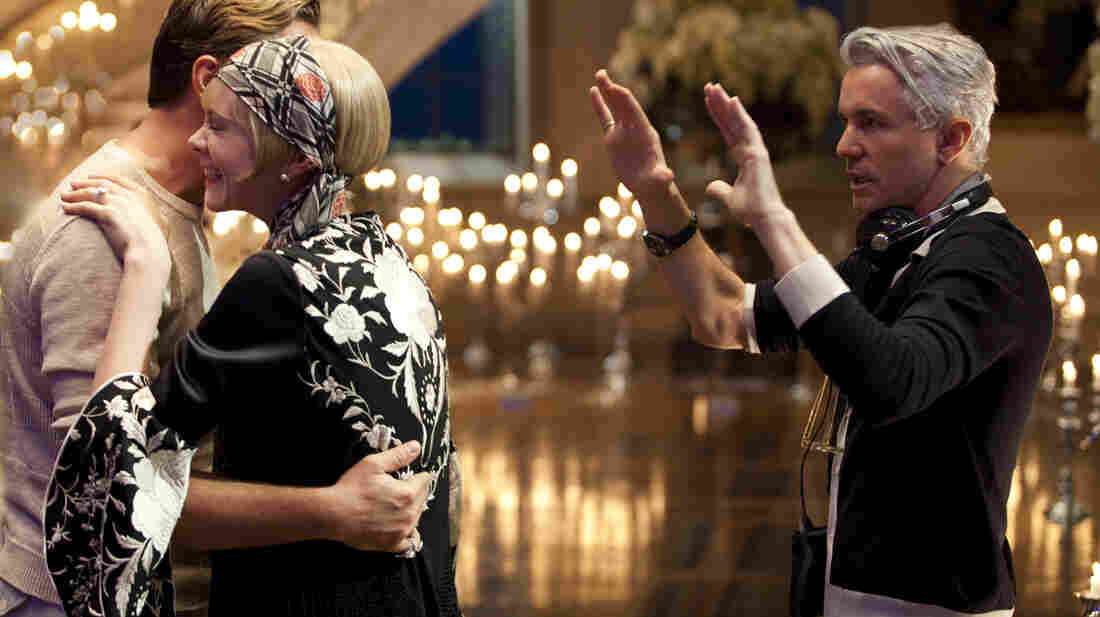 Light It Up: Director Baz Luhrmann (right, with stars Leonardo DiCaprio and Carey Mulligan on the set of The Great Gatsby) brought a lush visual sensibility to a tale whose tone not everyone thinks of as epic. Matt Hart/Warner Bros. Pictures hide caption

Here's a movie pitch: A celebrated millionaire, known for public extravagance, lives right on the water in a fabulous mansion. He's smooth but reckless, drives like a maniac, has a powerful enemy and — despite a rep as a playboy — has only one girlfriend, who barely registers on-screen.

You're the producer, so whaddya think? Does his story require lavish digital effects, swooping cameras, a rap soundtrack and the full-on 3-D treatment?

If I tell you his name is Tony Stark, otherwise known as Iron Man, probably yes, right?

What if his name is Jay Gatsby?

'The Great Gatsby': Retold Again, With A Distinct Treatment

Baz Luhrmann's new film version of The Great Gatsby, F. Scott Fitzgerald's wistful novel about love and longing on Long Island, really unleashes the roar in the Roaring '20s. It has songs by Beyonce and Jay-Z (who's also a producer); was filmed in 3-D, which renders its cocktail-party confetti pretty spectacular; and features soaring shots of a digitized 1920s New York, digitized mansions, even digitized mountains of coal-furnace refuse in a dump that Fitzgerald called the Valley of Ashes.

'Gatsby's' Jazz-Age Excess, All Over The Screen

Everything about the film is overstuffed, overdecorated and constantly in motion, including passages from the novel's text that materialize on-screen. It's the Great American Novel as fever dream, and if emotions and character get lost in all the disco-ball glitz, well, how could they not?

Now, if we want movies to be surprising, and not look and sound like the cookie-cutter clones we're always complaining blockbusters are, we have to allow directors lots of latitude. And Luhrmann is hardly alone in bringing a distinctive personal style to material that doesn't seem a natural fit.

Joe Wright (Pride and Prejudice) recently turned the great Russian novel Anna Karenina into an oddly stagey extravaganza — meaning he placed much of it literally onstage, sometimes behind velvet curtains. Wright's driving idea was that Russian aristocrats were mimicking Western European royalty, essentially performing for the Russian public; by making that notion literal, he gave what has been a frequently filmed story a deliriously distinctive feel.

More recently, action director Michael Bay took his first shot at an intimate story after a slew of Transformers sequels, and what he did in Pain & Gain was, um ... also distinctive: He basically took what might have been an amusing three-guys-and-a-scam plot and bludgeoned it into submission with machine-gun editing, smash zooms and every other trick in the blockbuster playbook.

Sometimes, though, a little well-placed gimmickry is exactly what's needed. At the outset of the upcoming documentary We Steal Secrets: The Story of WikiLeaks — which sounds dry as dust, right? — director Alex Gibney shows us not stolen documents but what looks like the Milky Way: a starry firmament of tiny dots that swirl and coalesce and then swirl away again. It's a visual motif he uses throughout the film, a representation of the flow of information on the Internet, and though it's completely made up, it's tremendously effective in suggesting how impossible to control that information is once it's out there on the Web. 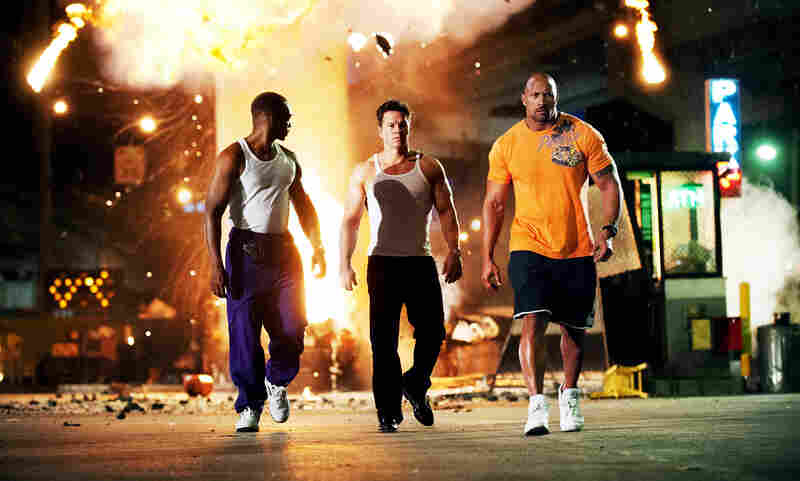 The Bang-Bang Club: Pain & Gain, with Anthony Mackie, Mark Wahlberg and Dwayne Johnson as three guys on a heist, is a coulda-been-nimble caper that got Michael Bay-ified on the way to the multiplex. Jaimie Trueblood/Paramount Pictures hide caption 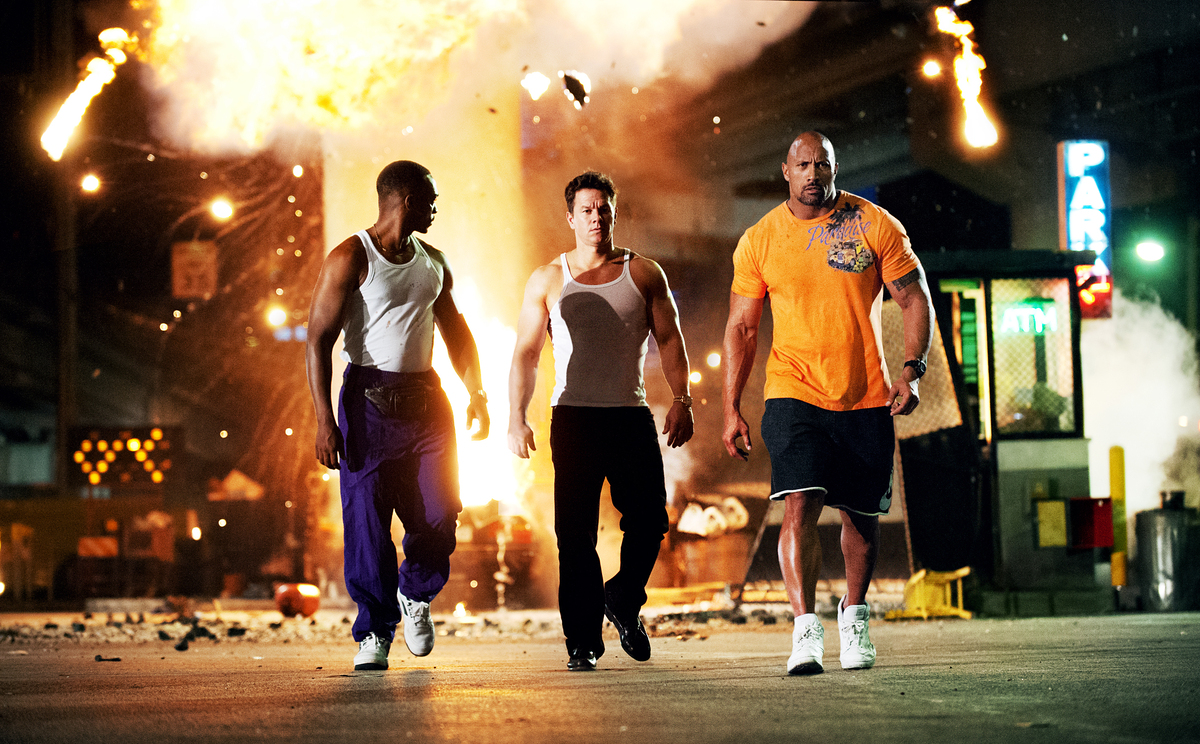 The Bang-Bang Club: Pain & Gain, with Anthony Mackie, Mark Wahlberg and Dwayne Johnson as three guys on a heist, is a coulda-been-nimble caper that got Michael Bay-ified on the way to the multiplex.

So you won't hear me argue for reining directors in. Well, maybe Michael Bay, a little. But not someone like Luhrmann, who in Gatsby employs a lot of the same tricks he used successfully in Moulin Rouge. As he told NPR's Scott Simon quite persuasively this past weekend, everything he did was a deliberate, thought-through choice, from the 3-D to the rap songs.

For some people, it will doubtless work swimmingly. And even though I'm less enthusiastic about it, I also know this won't be the last screen word on Fitzgerald's words. There've been five film Gatsbys already — the first of them silent and in black and white.

And with film techniques forever changing, maybe someday — maybe with holograms — someone will figure out how to make this great (and supposedly unfilmable) American novel into the great American film.