Accessibility links
Luhrmann's 'Gatsby': Bracingly Novel The movie is loud and obvious, but it's not a desecration of F. Scott Fitzgerald's 1925 masterpiece. Baz Luhrmann's interpretation of The Great Gatsby is more like a cartoony Broadway musical version of Gatsby in which no one, alas, sings. 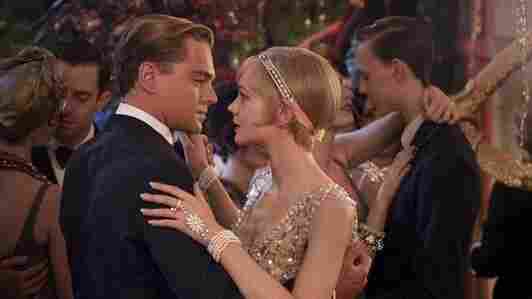 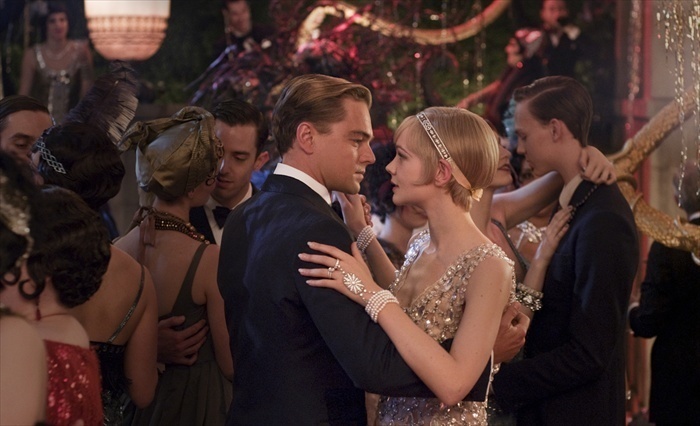 While I was watching Baz Luhrmann's Moulin Rouge back in 2001, I had the oddest experience. Someone's cellphone rang, and instead of getting annoyed I was ... relieved. The movie's bombardment was so relentless — so suffocating — that I thrilled to a signal from the outside world.

And so I admit to approaching Luhrmann's The Great Gatsby — which is in 3-D, no less — with dread. Here was one of my least favorite directors taking on one of my favorite novels. Well, the movie is loud and obvious and heavy-handed, but not the desecration I feared; it's more like a cartoony Broadway musical version of Gatsby in which no one (alas) sings. But F. Scott Fitzgerald's original can handle the vulgarity.

For all the novel's polish, it is vulgar. Fitzgerald sees through the riotous hedonism of the 1920s — but he's also magnetized, in love with it.

Because for all the novel's polish, it is vulgar. Fitzgerald sees through the riotous hedonism of the 1920s — but he's also magnetized, in love with it. And I prefer Luhrmann's showoff-y palette to the genteel approach of the last Gatsby movie in 1974, in which a dim Robert Redford pretended to yearn for a blank Mia Farrow.

It's too bad Luhrmann has chosen a framing device that's amazingly inane. The '20s are over, and the youngish narrator, apprentice bond trader Nick Carraway, is in rehab. He's writing a memoir — overseen by an eager shrink — and as Fitzgerald's words emerge from his typewriter, they often drift across the screen and, in 3-D, into our faces. Oy.

If you don't know the plot, Nick (Tobey Maguire) rents a dilapidated house next to the North Shore Long Island mansion of the mysterious Jay Gatsby, who throws outlandishly extravagant parties that he watches from a room above. It turns out Gatsby yearns for a woman named Daisy — Carraway's cousin — whom he courted five years earlier as a poor soldier. Now, she's married to the trust-funded polo-playing philanderer Tom Buchanan, whose manse is directly across the water.

In the movie the camera hurtles across that water — it's all computer-generated — to the Buchanans' place, instantly traversing a gap that I think should stay fixed. But it's hard for a director like Luhrmann to capture the notion of longing to be somewhere you can't be. He's not that spiritual.

Leonardo DiCaprio embodies that longing, though. The performance is broad — and he's more tan and healthy than I imagine the character being. But that works here. His Gatsby is still glowing with youthful dreams; he feigns an upper-class accent in the sincere conviction he can rise in society. It's easy to believe he thinks that with his new wealth he can vanquish time.

He finally meets Daisy in a touching scene in Nick's house, and for a while it looks as if he'll win her back. But later, in a tense scene in the Plaza Hotel, he has to overcome the bull that is Joel Edgerton's Tom Buchanan.

More On Reinterpretations Of 'The Great Gatsby'

The Australian Edgerton is a fine, subtle actor, but his Tom has few grace notes, and most of the other actors go equally over the top — the exceptions being the Indian actor Amitabh Bachchan as the gangster Meyer Wolfsheim and the Australian Elizabeth Debicki, who's an archetypal New Yorker flapper cartoon brought to vivid life.

Debicki pretty much upstages the Daisy of Carey Mulligan, an excellent actress who doesn't pop out of the screen the way you'd hope from this most tantalizing of all American literature's objects of desire. But I suspect none of us would agree on the ideal Daisy.

You can find fault with every scene in The Great Gatsby, but Fitzgerald does come through. Luhrmann throws money at the screen in a way that's positively Gatsbylike; he wallops you intentionally and unintentionally with the theme of prodigal waste. The montages are ham-handed, but the anti-realism brings to mind the great, unfettered imagery of silent film — as opposed to the usual stultifying reverence reserved for literary classics on screen. The anachronistic music by the likes of Jay-Z adds to the exuberant artificiality. Think of this Gatsby as a film opera, and it won't seem so terrible. It's not the novel, but it's bracingly novel.