Accessibility links
'Dangerous Territory': Carbon Dioxide Levels Reach Milestone The amount of carbon dioxide in the atmosphere has crossed the "psychological threshold" of 400 parts per million. That number is one of the clearest measures of how humans are changing the planet by burning fossil fuels. Carbon dioxide readings at the Mauna Loa Observatory in Hawaii have reached what atmospheric scientist Ralph Keeling calls a "psychological threshold" of 400 parts per million. The amount of carbon dioxide in the atmosphere has been steadily increasing since near-constant measurements began at the observatory in 1958. Jonathan Kingston/National Geographic/Getty Images hide caption 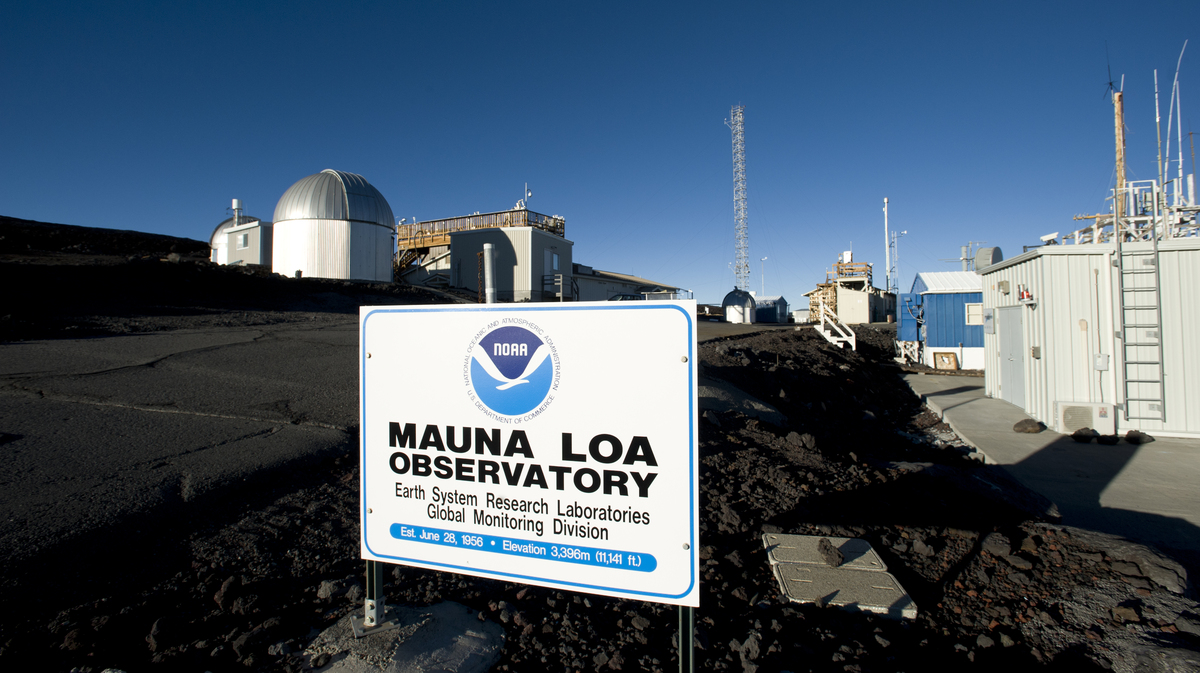 Carbon dioxide readings at the Mauna Loa Observatory in Hawaii have reached what atmospheric scientist Ralph Keeling calls a "psychological threshold" of 400 parts per million. The amount of carbon dioxide in the atmosphere has been steadily increasing since near-constant measurements began at the observatory in 1958.

Earth's atmosphere is entering a new era. A mountaintop research station that has been tracking carbon dioxide for more than 50 years says the level of that gas in our air has reached a milestone: 400 parts per million.

That number is one of the clearest measures of how human beings are changing the planet. It shows how much carbon we have put into the air from burning fossil fuels — and that carbon dioxide drives global warming.

This measurement comes from Mauna Loa, Hawaii, a remote volcano where the air is largely free of local influences. 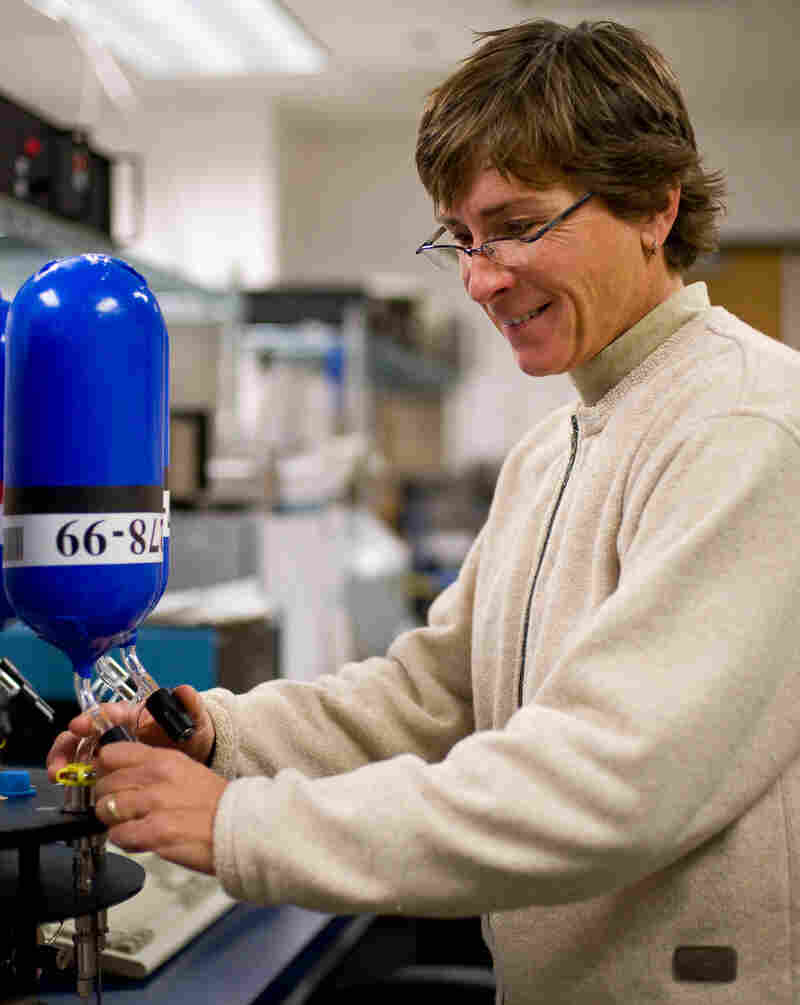 Pat Lang, of NOAA in Boulder, Colo., measures the amount of greenhouse gases from an air sample. The Boulder lab is part of a global network of air-sampling laboratories that track carbon dioxide levels in the atmosphere. Will von Dauster/NOAA hide caption 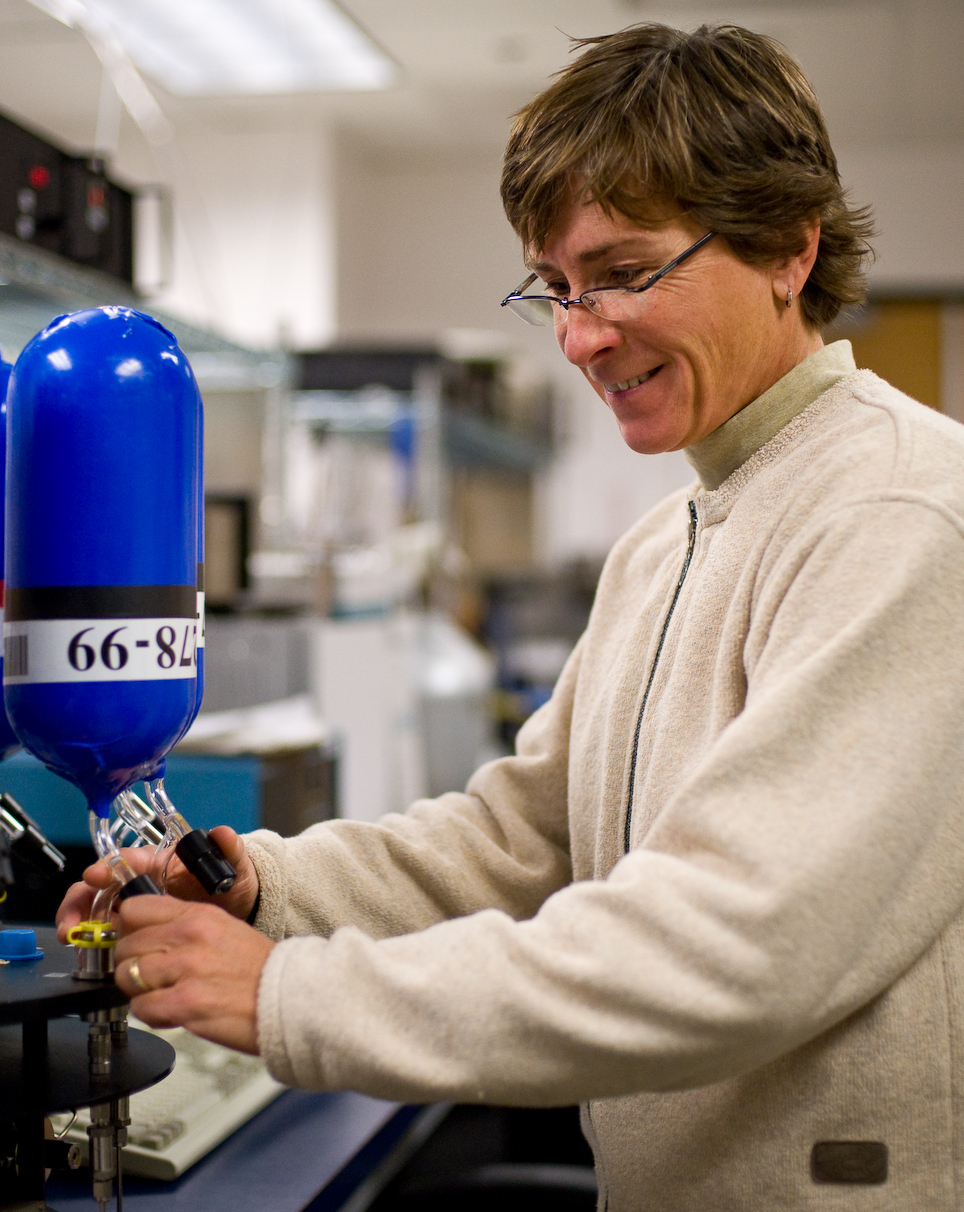 Pat Lang, of NOAA in Boulder, Colo., measures the amount of greenhouse gases from an air sample. The Boulder lab is part of a global network of air-sampling laboratories that track carbon dioxide levels in the atmosphere.

Back in 1958, Charles David Keeling, a geochemist affiliated with the Scripps Institution of Oceanography at the University of California, San Diego, started measuring carbon dioxide levels from Mauna Loa. His first measurements showed carbon dioxide levels at 313 ppm. And over the lifetime of his son, atmospheric scientist Ralph Keeling, a single-day measurement has now reached the big, round number of 400 ppm.

"Of course there's no real planetary threshold at 400," says Ralph Keeling, who took over the monitoring project at Scripps after his pioneering father died in 2005. "It's a psychological threshold." The 400 ppm Rubicon is a reminder of just how rapidly our atmosphere is changing.

"It does feel like we're moving from the past into the future at this juncture," Keeling says. "It's like one of these milestones, like the change of a millennium. You know you're going to get there ... but you always think of it as being off into the future. And now, here we are, moving into what feels like another era."

Keeling says a daily reading of 400 ppm really marks the beginning of a transition that will play out over several years.

"The atmosphere doesn't have completely uniform carbon dioxide concentrations," he says. "It oscillates up and down during the season, and on average it's a little higher in the northern hemisphere. And what we're seeing right now is the beginnings of flickers up toward 400 parts per million at the iconic Mauna Loa record."

And what does this mean? The physical meaning of the number is quite straightforward. Out of a million air molecules, 400 are carbon dioxide.

That's 0.04 percent. But that small number packs a big punch. That amount of carbon dioxide can trap a great deal of heat in our atmosphere. In fact, the planet would be frozen solid if we didn't have any carbon dioxide in the air.

"Lots of things that are present in small amounts can have big impacts, I mean, if you think about blood cholesterol or anything else," Keeling says.

And more to the point, these levels have increased rapidly.

"These are not small changes in percent terms. Two or 3 million years ago was the last time we had concentrations in this range, so we're moving into territory that's almost outside the scope of human existence on the planet at this point," he says.

Atop A Hawaiian Mountain, A Constant Sniff For Carbon Dioxide

This enormous change has actually occurred during the careers of today's senior earth scientists. Take for example Richard Houghton at the Woods Hole Research Center.

"I graduated from high school in 1961 near the beginning of this record, and concentration then was just a little over 315 parts per million," Houghton says. "I came to Woods Hole in 1975, and it was then somewhere between 325 and 330. By year 2000 the concentration was over 360."

And the pace of change is actually accelerating.

And of course there's nothing magical about the year 2100 that would stop the trend at that point. Houghton has spent a chunk of his career trying to understand how the planet has dealt with all that carbon dioxide.

It turns out only half of the carbon dioxide we've put into the air by burning fossil fuels has actually stayed in the air. And it will remain there for centuries. The other half has been soaked up by the oceans, trees, soils, vegetation and so on.

But Houghton says we shouldn't assume that nature will be able to keep this up forever. For one thing, as the oceans warm, their ability to soak up carbon dioxide will slow.

"My guess is that at some point the take-up of carbon by oceans and land will at first level off and then decline," Houghton says. "And it's possible we could have a reverse so that nature, instead of absorbing carbon dioxide, is releasing it. And then we're in big trouble in terms of managing the carbon cycle."

There is no bright line between a "safe" and "dangerous" amount of carbon dioxide in the atmosphere, Keeling says, "but certainly I'm among those who think if we wanted to be prudent about this we shouldn't have let it go over 350, so we're already into dangerous territory."

And now that we've reach 400 parts per million, we're heading deeper into the unknown.

Charting The Rise In Carbon Dioxide Data prior to 1958 come from ice and snow data from Law Dome, Antarctica. Subsequent data are from air measurements taken at Mauna Loa Observatory in Hawaii.