Accessibility links
Loving 'Gatsby' Too Much And Not Enough Baz Luhrmann's extravagant adaptation of The Great Gatsby makes two fatal and contradictory errors of adaptation. 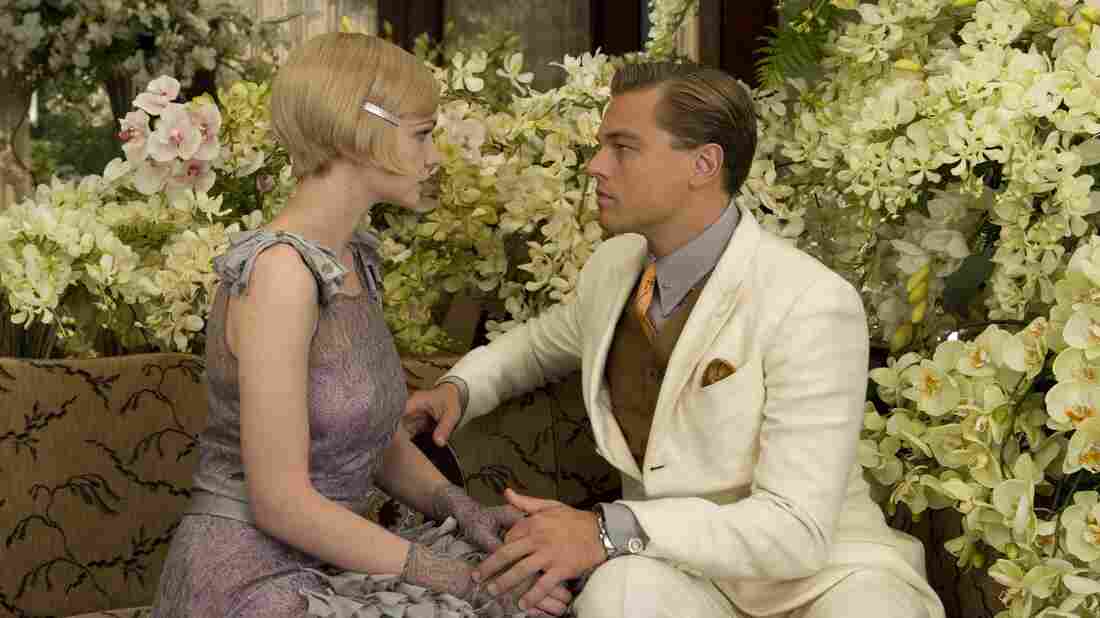 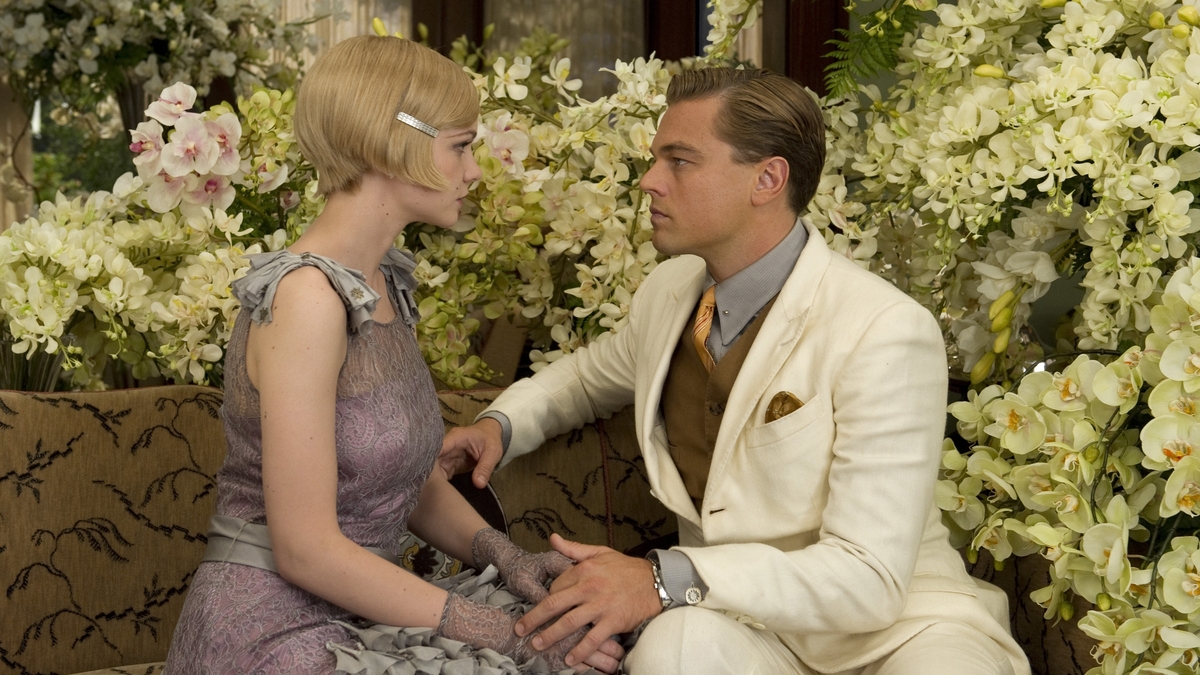 The sheer zazz that Baz Luhrmann introduces into The Great Gatsby is so imposing in quantity that it's surprising that it can get out of the way enough not to be the biggest problem in the movie. Luhrmann, after all, loves his swooping cameras and party scenes, and Gatsby gives him the best excuse for excess that there is: a story about excess.

Directorial playfulness turns out, in fact, to be one of the film's strengths, from an inventively exhausting party sequence to the mix of music on the soundtrack. The tracks from Jay-Z and Lana Del Rey have gotten most of the attention, and they're used well to remind us what such rich, young, perfect people might listen to now. But there's also era-appropriate material, including a clever segue from "Let's Misbehave" to "Ain't Misbehavin'," along with a perfect deployment of an overclocked "Rhapsody In Blue," which revels in its own stair-climbing excesses.

Where Luhrmann runs into trouble is not with his flashy glitz, but in his treatment of the F. Scott Fitzgerald novel: he is too faithful on one hand and too cavalier on the other.

It's clear that everyone involved so loves the prose of the book that they felt the film could not exist without it — could not exist without, probably most importantly, Nick solemnly intoning, "So we beat on, boats against the current, borne back ceaselessly into the past." Apparently convinced that this could only be a voice-over and a voice-over needed to be explained, Luhrmann and co-screenwriter Craig Pearce came up with not one but two framing devices: Nick telling the story of Gatsby to a psychiatrist and Nick tapping out the tale on a typewriter. (The final shots related to Nick's writing project are, it must be said, embarrassing. There is simply no other description that feels honest.)

There are liberties taken with the voice-over, in that it reads only tiny portions of the novel and both adds and subtracts in ways that are sometimes perplexing, and particularly because of the gaudy and inessential 3D, seeing words float off the screen as they are spoken aloud often places such emphasis on them that they instantly feel painfully distant.

That's what happens when Nick explains Gatsby's feelings as he hesitated to kiss Daisy and cement his bond with her. The words making up the assertion that Gatsby knew that after this his mind would never romp again like the mind of God flow naturally in the novel, but when Tobey Maguire reads them aloud and they appear in a studied typewriter font and begin to float off the screen, they feel forced and false and weighted with too much announcement of their own importance. The prose everyone was so determined to preserve is present, but with the blood drained from it.

More important, though, is the fact that the entire moral underpinning of Gatsby is lost because it is given a romantic aspect far beyond what should be there. The bluntest and best explanation I've seen came from Will Leitch at Deadspin, who described the Gatsby-Daisy scenes as "all soft-focused and romantic, like they're Romeo and Juliet rather than a deluded cursed megalomaniacal social climber and a spoiled old-money brat who just wants everything at no cost to her." Indeed.

Gatsby and Daisy in this film are doomed and tragic, and when he eventually dies and she doesn't attend his funeral, the sense is that she has given in to her sense of trapped misery, that she wasn't brave enough to leave her terrible husband for the man she really loved. What doesn't come through is the book's clear sense of Daisy's flighty irresponsibility, her entitled emptiness, and her ultimate willingness to walk away from all she's done and keep dancing.

In the film, the only real villain is Tom, Daisy's husband: he's the cheating, spiteful bully who sends his lover's spouse to kill his spouse's lover, not out of grief, but out of expediency. He hovers menacingly over Daisy's exit from the story in a way that drains her of blame and underscores the notion that Gatsby and Daisy are doomed victims of the same cruelties.

Luhrmann bestows upon actress Carey Mulligan such cinematographical adoration — he seems at times to be worshipping her every mole — that Daisy becomes paradoxically too genuine, too alive. At one critical juncture, where the book's Daisy simply says that she's crying because she's never seen such beautiful shirts and the interpretation is left to the reader, the movie's Daisy is allowed to suffer and stammer and extravagantly feel, while Nick explains how she's weighted down by her love of Gatsby, before she makes that rather silly statement about the shirts. Daisy in the book is a figure of vexing remove, which is part of what makes her so hard to get right in a film. And while Mulligan plays some pained, tormented woman quite beautifully at times, it isn't really Daisy Buchanan.

But no character is let off the hook, freed from any indictment, quite like Nick Carraway himself. From the outset, Nick's narration keeps certain things and omits others: you hear Nick explain, as he does in the novel's first paragraphs, that his father told him not to judge people, but you don't hear him explain that as a result of what he considers his profoundly understanding nature, people were constantly boring him with their stories and confessions. In the book, while he acknowledges it's "snobbish" to say so, he believes himself an unusually good man: "A sense of the fundamental decencies is parcelled out unequally at birth."

Tobey Maguire's Nick is not a man who only faux-apologetically admits to snobbery. He's a purely naïve, moon-faced innocent, just coming to the big city to make his way in the world and being sucked under by — you guessed it — Tom Buchanan, who introduces him to all things decadent. This does not seem to be a guy who could plausibly have gone to war, given that he seems shocked by jazz music. Part of it is a casting problem, since Maguire never seems older than about 17 and oozes boyhood no matter his age. It's what made him so perfect for Pleasantville long ago and made him such a good Peter Parker even recently. But he is not a very persuasive hard-partying veteran growing grizzled and bitter.

Nick becomes Gatsby's confidante, his only friend, the only person who clearly sees the folly of what Gatsby is doing — and eventually, in a complete abandonment of one of the critical pieces of the novel's ending, Nick becomes the only person Gatsby has in the world.

Gatsby, very nicely played by Leonardo DiCaprio in a role that, for once, steers into rather than away from his gorgeousness, is the only really interesting person here. That means that Nick's extravagant (and exaggerated) devotion to him makes Nick seem far more noble, far more deserving of sympathy, than he should be. In the book, Nick comes off as something of a wealth-intoxicated hanger-on who's far too willing to complain about rich people while eating their food and drinking their booze and eavesdropping on their drama — not that he knows this about himself. But here, he is the one good, kind man left in America.

When this story closes, it takes quite an act of piecing together to remember that as Tom and Daisy exit their East Egg home, they are doing so having directly or indirectly killed three people with their pettiness and fundamentally unserious way of approaching other humans. Two people born into privilege have mercilessly killed three people born into poverty, and somehow, that class commentary is invisible. The love story is all there is, and nothing is left of what is, at best, Fitzgerald's deep ambivalence about the American dream.

In a recent piece for Vulture called "Why I Despise The Great Gatsby," Kathryn Schulz explained that she's always found the book an utter bore, largely because she's so indifferent to Gatsby and Daisy, "the great, redemptive romance on which the entire story is supposed to turn." But Gatsby and Daisy in the book are not a great, redemptive romance — Daisy is vacant, and Gatsby is delusional and chasing a fantasy. She also sees Nick as a dully passive "innocent bystander," rather than the fully participating scold he really is. If she's wrong about the book, it's because she's describing the story differently than it strikes most readers (and some discussions of her piece agree).

In a sense, Luhrmann has filmed Schulz's Gatsby: centered on the romance as grand and beautiful, unwilling to hold Nick (or really anyone else) accountable. That's what makes it troubling. The direction, the acting, the soundtrack, the sparkle and majesty — these things are assets and should have made the story work. But they don't, because the screenplay loves the book both too much and too little.