Accessibility links
Media Focus On Ailing Mandela Is Not 'The African Way' The extensive coverage of Nelson Mandela's fading health has sparked intense debate in South Africa. Many say the African way views the twilight years as a final journey, a time of peace and respect, and that journalists should be more sensitive. 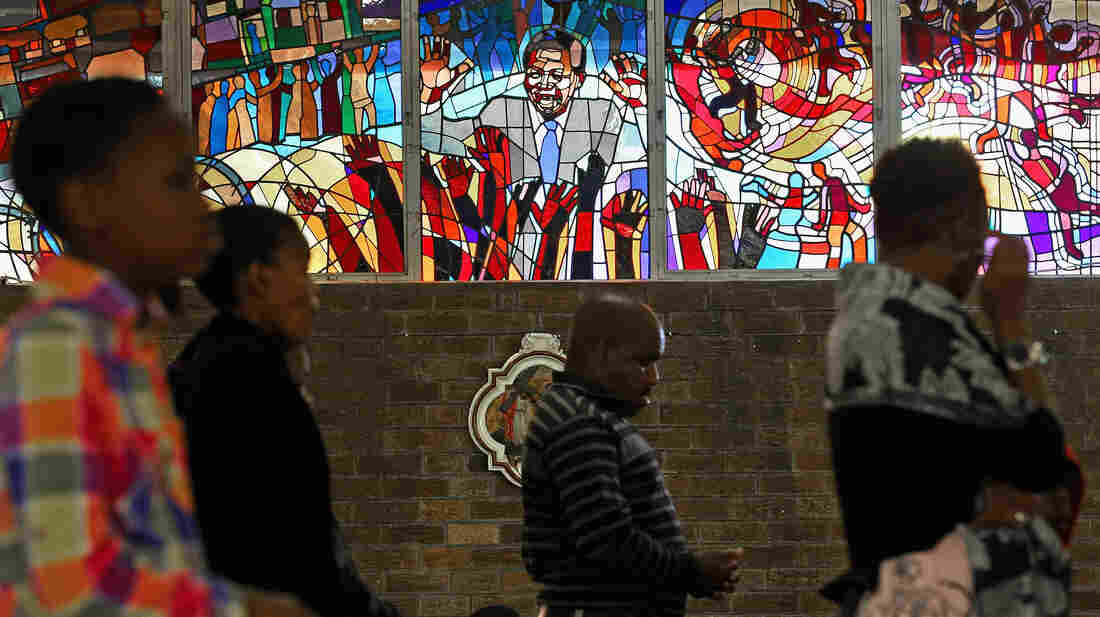 Congregants pray in front of a stained-glass window depicting South African statesman Nelson Mandela during Easter services at Regina Mundi Catholic Church in the Soweto of Johannesburg, South Africa, March 3. The church held prayers for Mandela, 94, who was in the hospital at the time. Chip Somodevilla/Getty Images hide caption 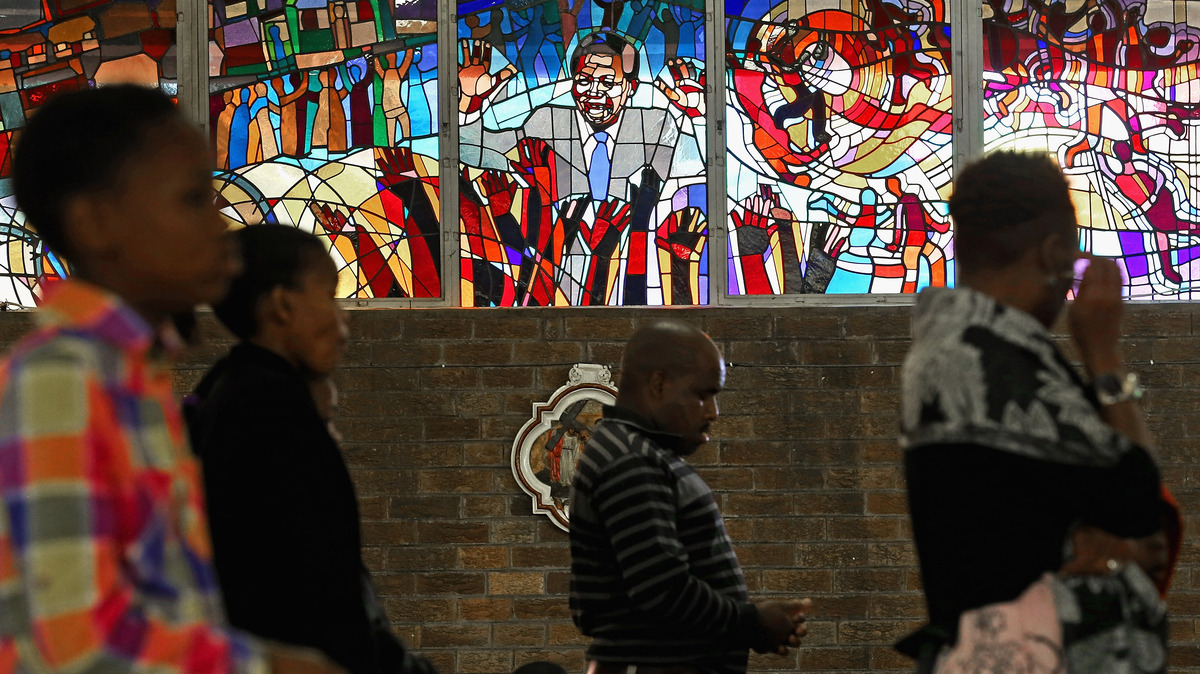 Congregants pray in front of a stained-glass window depicting South African statesman Nelson Mandela during Easter services at Regina Mundi Catholic Church in the Soweto of Johannesburg, South Africa, March 3. The church held prayers for Mandela, 94, who was in the hospital at the time.

It's almost impossible these days to switch on South African radio or television, or read a local newspaper, website or tweet, and not hear Nelson Mandela's name mentioned.

Friday marked the 19th anniversary of Mandela's inauguration as South Africa's first democratically elected — and first black — president, four years after he was released from prison.

For many South Africans, the coverage of his recent hospitalization and poor health seems like media overkill. Older South Africans stress that the African way of coping with the twilight years is culturally nuanced. It should be viewed as a final journey, and journalists should be more sensitive to these customs. 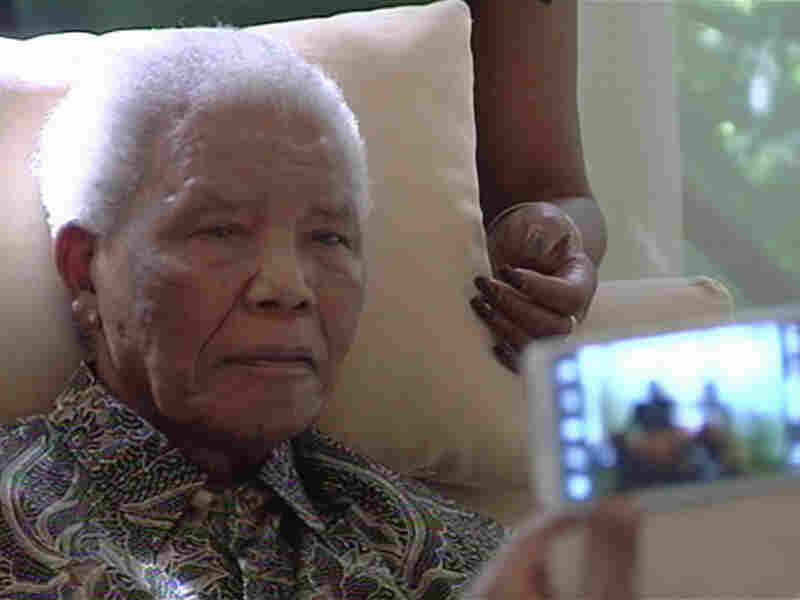 The poor health of the anti-apartheid icon (shown here in this image taken from video April 29) has attracted a swarm of foreign journalists to South Africa. Uncredited/AP hide caption 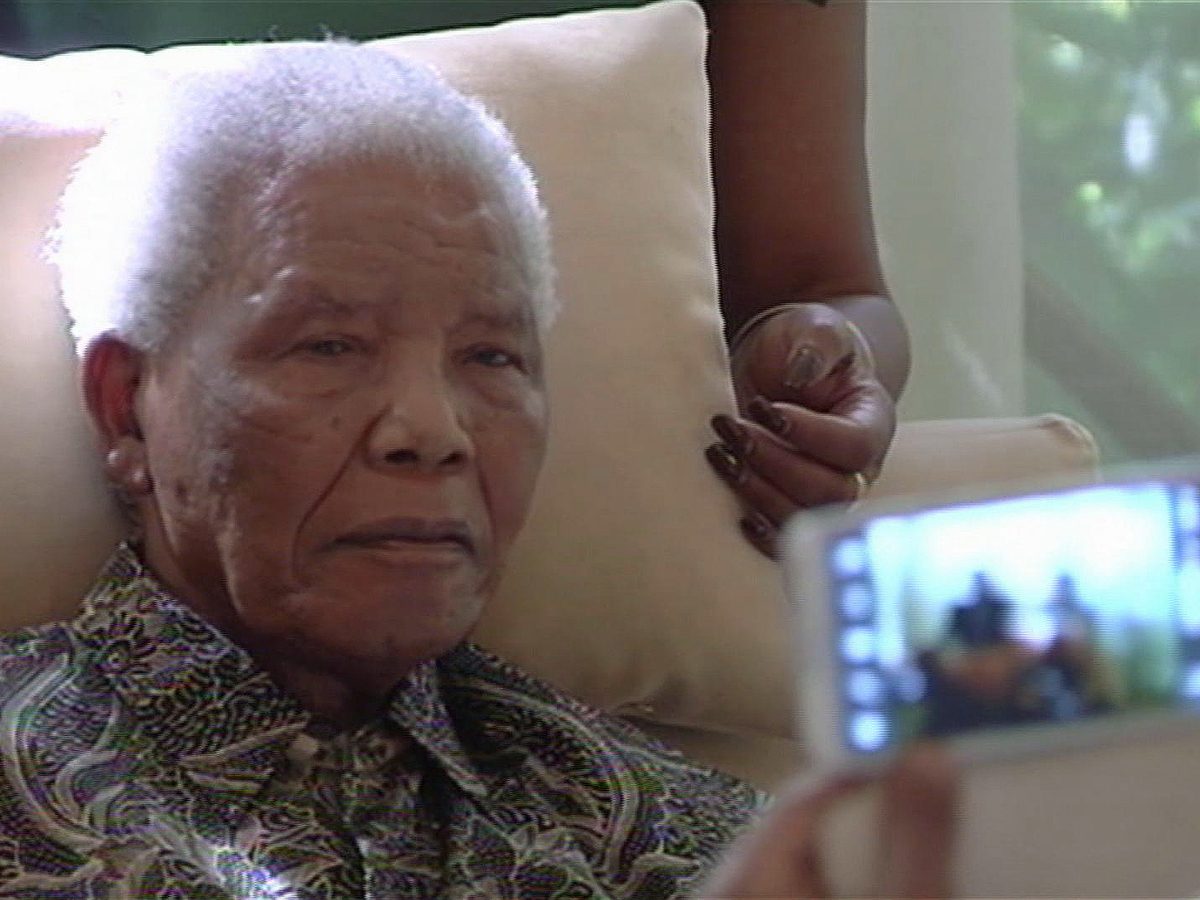 The poor health of the anti-apartheid icon (shown here in this image taken from video April 29) has attracted a swarm of foreign journalists to South Africa.

And when the subject is raised in the context of his possible death, "we get people who will call ... to say 'we don't speak about it, certainly not in our culture, not in black culture, not in African culture,' " radio host Ashraf Garda said recently on the national broadcaster's Media@SAfm show.

Mandela was back in the hospital at the end of March for 10 days with a recurring lung infection and pneumonia. The latest health scare attracted journalists from around the world. And some South Africans say they are feeling bombarded by reporters hungry for information and commentary about the 94-year-old former president.

"It does become a bit wearisome, and I suppose some people have become upset about it ... the sheer volume of coverage and the degree of personal detail that goes with it," he said.

However, Sparks added that South Africans must accept that Mandela is a global figure who continues to attract global attention for his leading role in ending apartheid nearly two decades ago.

"We have to recognize that the world is interested in him. And we've got to understand that there are many cultures in our society, and no particular culture can expect to prevail," Sparks said. "It's part of recognition of a great man."

Ma Fikile Mlotshwa was among the churchgoers at a recent service who were singing — and praying — for Mandela, or as most South Africans affectionately call him, Madiba, his clan name.

S. African Leader Under Fire After Awkward Visit With Mandela

"Madiba is to us a leader, he is a father first of all. And we pray and hope for him for all the best," she said. "But at the same time, for an elderly person — according to African culture — this business of you people [journalists] coming to interview us all about this, and that is not African. It's not African, because it is interfering with the African spirit. The African way is to respect. At his age, to pray for him peacefully, so that when God does call him, he will rest in peace."

Other South Africans are repeating this sentiment: that Mandela is, indeed, a global symbol, but his time will come and we must all accept that and let him go — gently.

South African President Jacob Zuma contributed to the controversy when he visited Mandela at home after he was discharged from the hospital. Video footage of the meeting last week aired on national television, showing a frail Mandela with a blank and at times bewildered look. Zuma was widely criticized, and while he has defended the visit, he has also spoken about the need to show respect for Mandela.

"Let us slow down the anxiety. The country must not panic. In Zulu, there is a time when somebody passes away, who's old, people say he or she has 'gone home.' Those are some of the things we should be thinking about," Zuma said.

But, she adds, reporting on Mandela's health, or even death, requires balance.

"We have to get it right. At the same time, we have to make sure we do not trample on sensitivities, whether they be cultural or whether they just be common human decency," Brown says. "And I think we really can draw the line between those two things."