Accessibility links
C-Sections Deliver Cachet For Wealthy Brazilian Women Brazil's economic boom has driven the demand for births by caesarean section. Some 80 to 90 percent of women in private hospitals deliver this way. Proponents say it allows mothers and doctors to better organize their time. Critics say the procedure drives up costs and may cause complications. 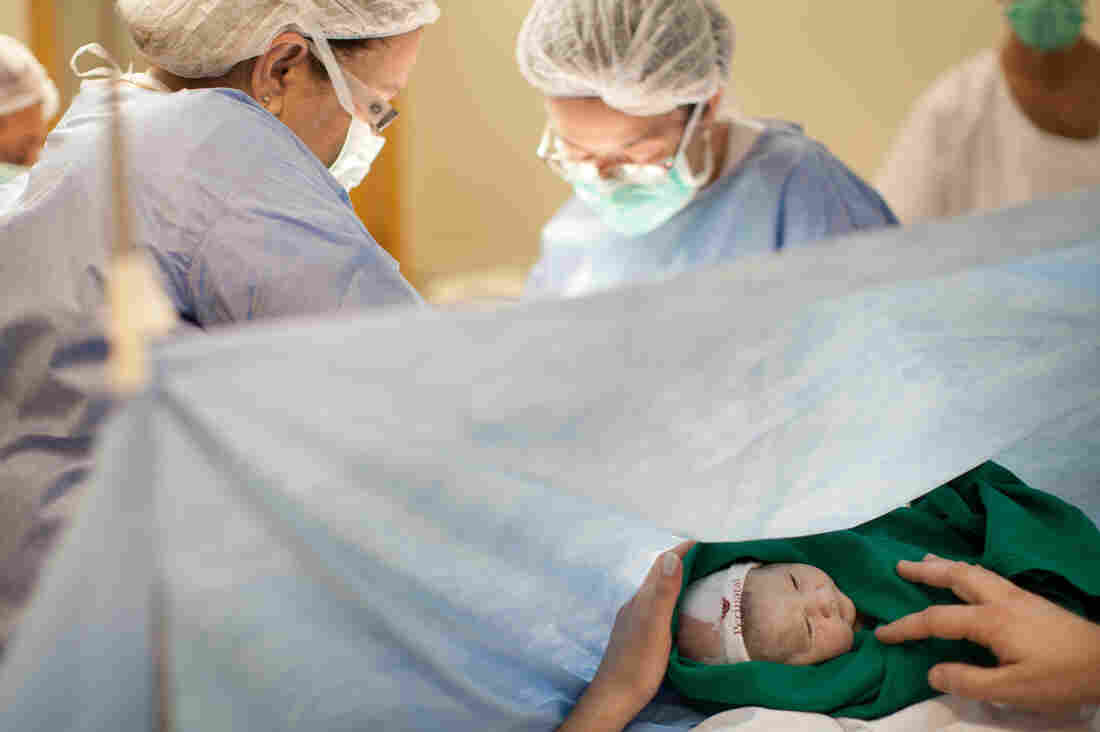 Daniele Coelho holds her newborn daughter as doctors finish her cesarean section at the Perinatal Clinic in Rio de Janeiro on Aug. 2. Brazil has one of the world's highest rates of cesarean births. Felipe Dana/AP hide caption 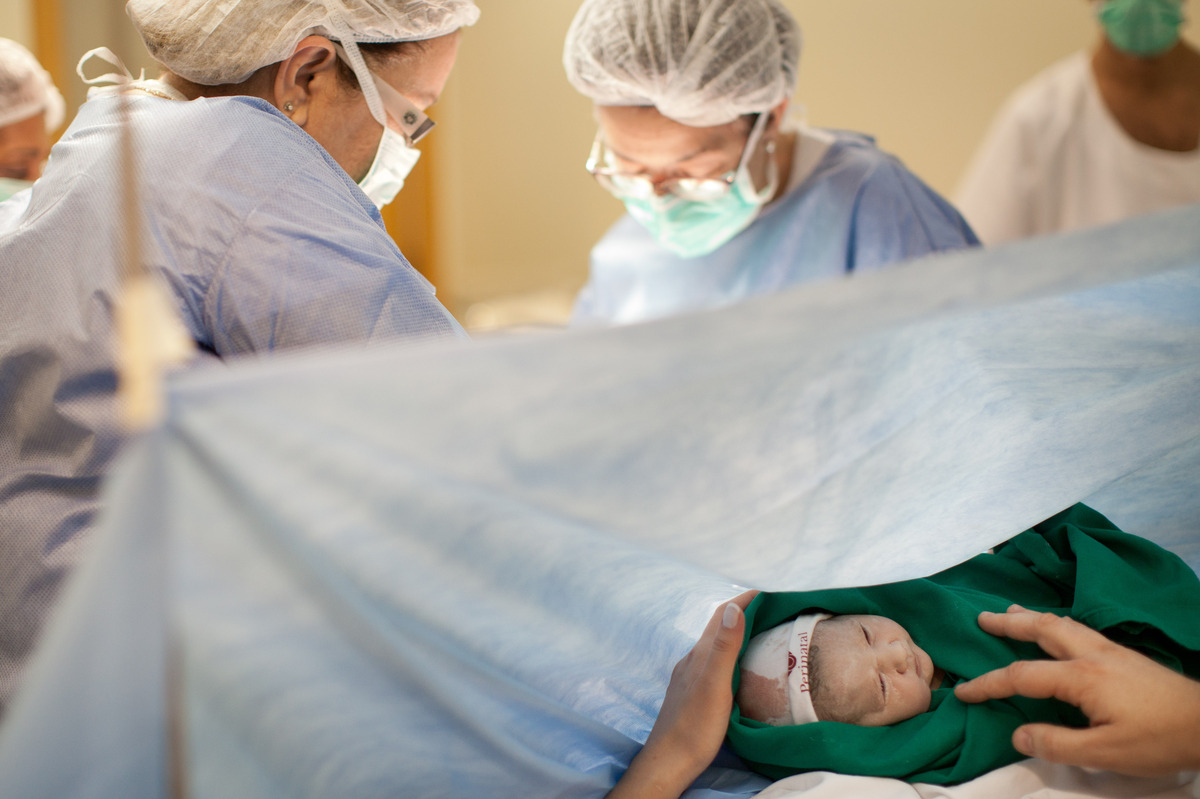 Daniele Coelho holds her newborn daughter as doctors finish her cesarean section at the Perinatal Clinic in Rio de Janeiro on Aug. 2. Brazil has one of the world's highest rates of cesarean births.

The office is immaculate, as you would expect in an upscale neighborhood in Sao Paulo — all sterile, white, modish plastic furniture and green plants. Behind the reception desk are pictures that would look more appropriate in a pop art gallery than a private maternity clinic.

The list of services at the clinic in Brazil's largest city is long: fertility treatments, specialized gynecology and, of course, obstetrics. But one thing they rarely do here is preside over a vaginal delivery.

Dr. Alexandre Sasaoka struggles to remember the last time he assisted at one. We do them, he says, but rarely. 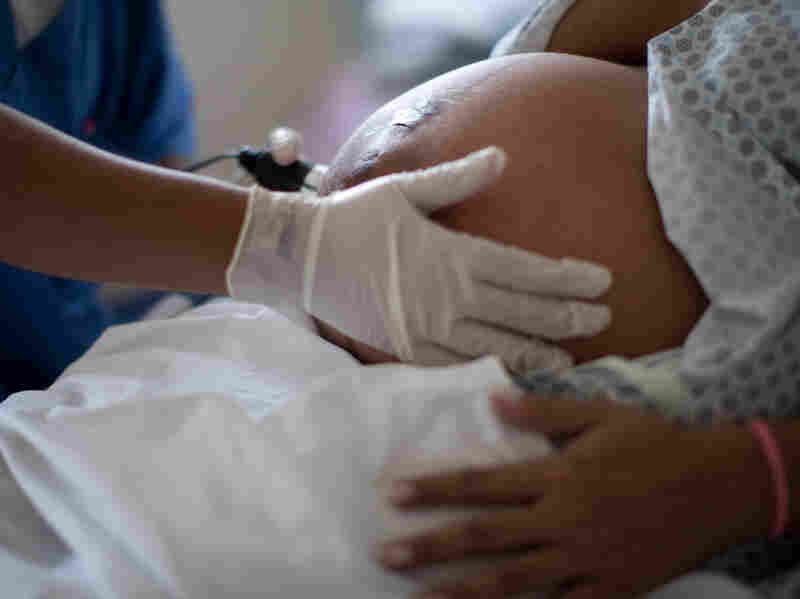 A pregnant woman is examined as she waits to give birth at a public hospital in Rio de Janeiro on July 25. The rate of C-sections — which cost more than vaginal deliveries — is much lower at public hospitals than at private facilities in Brazil. Felipe Dana/AP hide caption 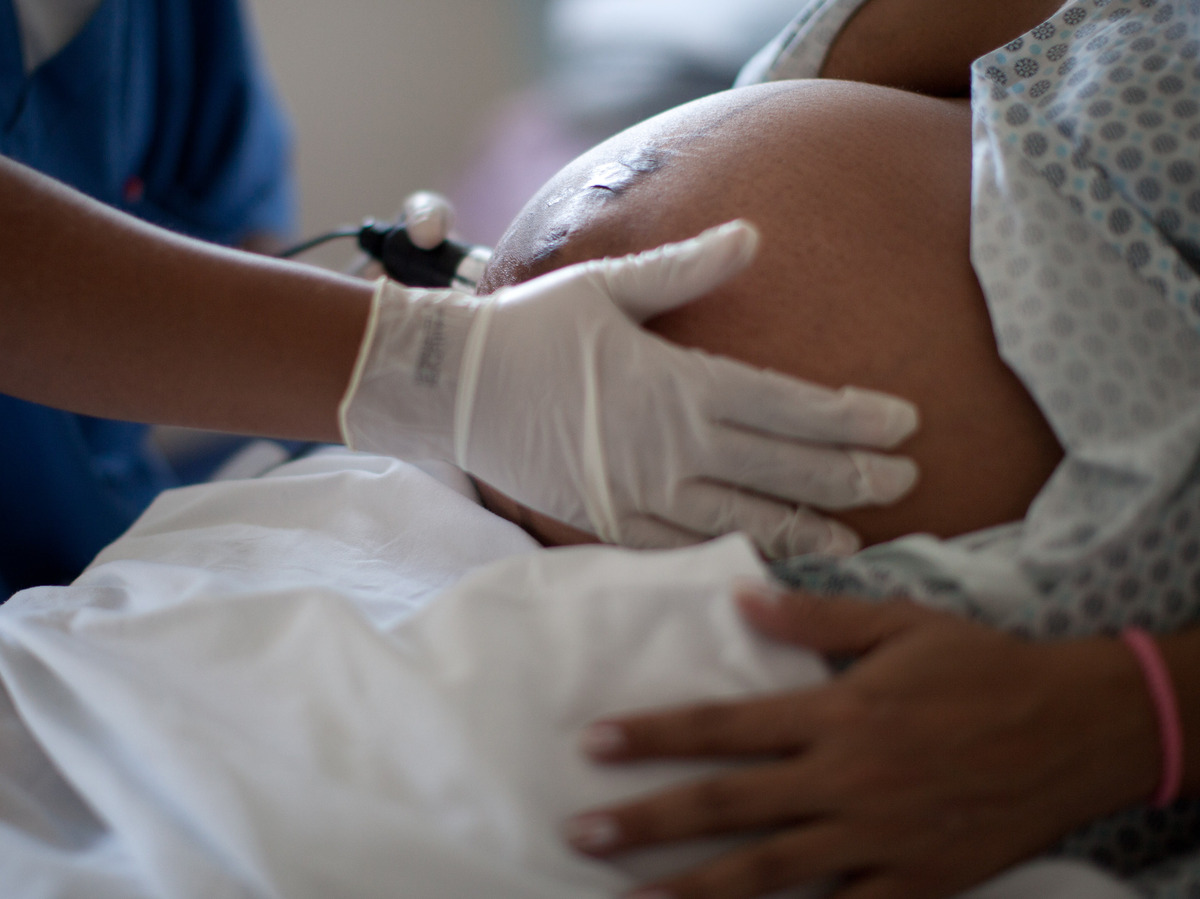 A pregnant woman is examined as she waits to give birth at a public hospital in Rio de Janeiro on July 25. The rate of C-sections — which cost more than vaginal deliveries — is much lower at public hospitals than at private facilities in Brazil.

And he's not alone.

Brazil has one of the world's highest rates of cesarean deliveries: Some 80 to 90 percent of women in private hospitals in the country give birth via cesarean section. In some hospitals that number climbs to 99 percent.

Much Higher Than The U.S.

That contrasts with 30 percent of women in the United States and 1 in 4 women in Britain.

And even that is high: The World Health Organization says more than 15 percent of women giving birth by C-section is too many. It cites increased medical costs and neonatal complications as potential problems.

But Brazil's economic boom of the past decade has dragged some 40 million people into the middle class. The emphasis on status begins at birth — and cesarean deliveries are the Louis Vuitton of the maternity world.

Women in Brazil want C-sections, says Sasaoka. They like them because they prefer being able to schedule their delivery and better organize their busy lives.

Sasaoka says he also recommends them.

He says he doesn't think they are necessarily better, but that a woman needs to consider more than just the medical aspect of birth, such as the impact on her and her family.

Of course, he says, there are many advantages to a natural birth; C-sections are a major surgery, after all. But he says women ask for C-sections, and they also allow doctors to be better organized.

For example, he says, doctors don't have to interrupt what they are doing with other patients to assist a natural birth.

There is a debate in Brazil as to why the rate here is so high. Doctors like Sasaoka say it's due to the demand.

About A Third of Births, Even For First-Time Moms, Are Now By Cesarean

But new mother Mariana — who doesn't want her last name used for fear of offending her doctor — says often women feel bullied into it.

She says she wanted to have a vaginal delivery.

"My doctor said to me he'd have more control in a C-section than in a natural birth," she says.

He also told her he would also almost certainly have to do an episiotomy — a procedure where the vaginal opening gets cut to allow for delivery. She was terrified. She says her doctor kept telling her that C-sections were better, and that she felt pressure to have one.

Still, Mariana decided to try to give birth naturally. Then two weeks before her due date, her blood pressure spiked. And her doctor said she needed to have a C-section after all. The next day she was in the operating room.

To this day she wonders if it was really necessary. She says that's the legacy of all the intervention here.

"I don't know. I think he was right," she says. "But the problem in Brazil is we lack the trust between doctor and patient."

Brazil has a two-tiered medical system. The C-section rate in public hospitals is much lower, the result of a government push to reduce medical costs associated with C-sections.

But in private hospitals, cesarean deliveries are seen as status symbols.

And that, say natural childbirth advocates, has to change.

While doulas — or birth coaches — are a regular presence in many maternity wards these days in the U.S., they are still uncommon in Brazil.

But they are the first port of call for couples looking to have a natural birth.

Doula Mariana de Mesquita talks to a couple who say they are having trouble finding a doctor who is willing to deliver their baby vaginally.

She says her profession basically disappeared with the rise of C-sections. And she says one of the most important roles she has these days is education.

"Most women don't even know how long labor can last, the basics," de Mesquita says. "So I teach them what a normal birth is like, what they can expect."

De Mesquita adds that doctors do get paid more for C-sections, which is another reason for their prevalence.

But she also blames women here.

She says Brazilian women aren't afraid of surgery. There is a lot of plastic surgery, for example.

She says people in Brazil see C-sections as a sign of women's liberation, but she sees them as "a sign of their submissiveness to a violent medical system."

That's nonsense, says 29-year-old Pamela Bassy. She works at a store in an upscale mall, and she's expecting a son in a few months.

With a cesarean, she says, she can take full advantage of her maternity leave, working right up to the day before she gives birth.

"My family and my husband wanted me to have a vaginal birth," she adds. "But in the end, it's my choice."