Accessibility links
For Year-Round Buzz, Beekeepers 'Fast-Forward Darwinism' Honeybees are in trouble across the U.S., but one association in Massachusetts is hoping to boost the population in its own area. The bees it currently uses have a hard time surviving the winter and battling other foes that have been killing bees nationwide. So beekeepers in Plympton decided to breed their own. 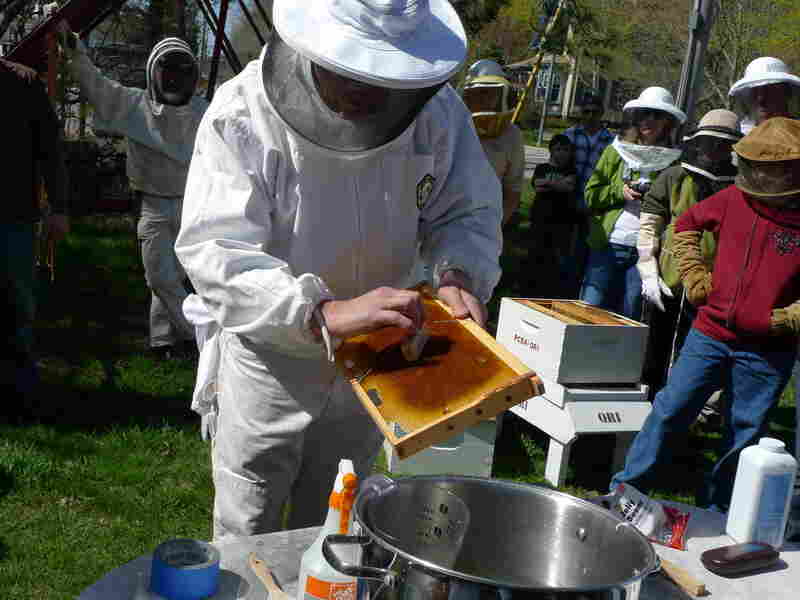 Members of the Plymouth County Beekeepers Association in Plympton, Mass., watch an instructor demonstrate how to "install" their new bees once they get them home. Katherine Perry for NPR hide caption 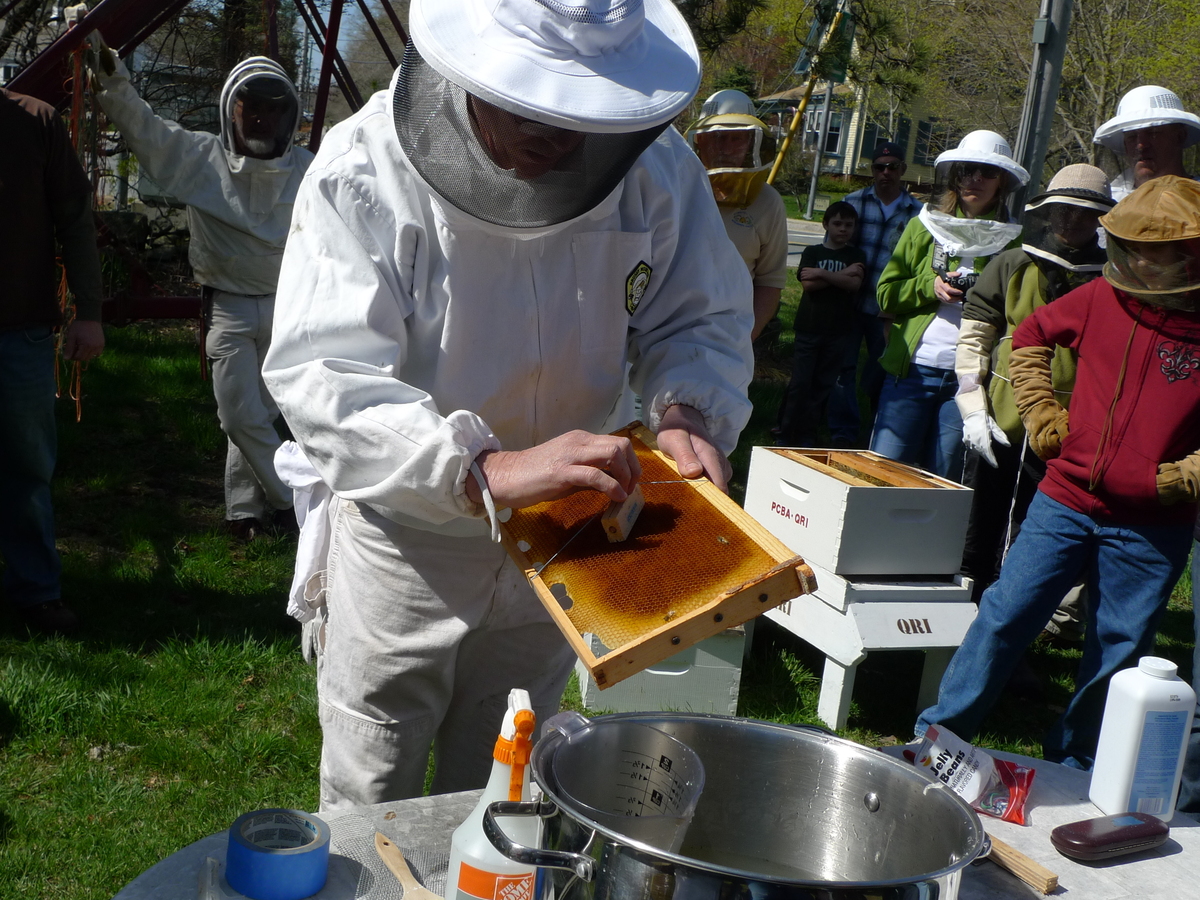 Members of the Plymouth County Beekeepers Association in Plympton, Mass., watch an instructor demonstrate how to "install" their new bees once they get them home.

Beekeepers In Massachusetts are taking the mission to save the bees into their own hands.

There has been a dramatic disappearance of honeybees across the U.S. since 2006. A recent U.S. Department of Agriculture report blamed a combination of problems, including mites, disease, poor nutrition and pesticides.

To fortify the honeybee population in its area, the Plymouth County Beekeepers Association in Plympton, Mass., is slowly nurturing its own, stronger breed.

The arrival of the bees is a rite of spring for the group. This year, the club's 300-some members came out to pick up 525 crates of honeybees. Ann Rein, president of the association, estimates there are more than 5.2 million bees in total.

She says most people in the club, like Steve Brown, got into backyard bees not to save the Earth, but for more hedonistic reasons: honey and entertainment.

But the bees Brown is picking up this season likely won't survive the winter. They are bred in Georgia; the majority of the U.S. bee-rearing industry is in the South. They are unsuited to the New England climate, and are vulnerable to the same factors being blamed for the widespread decline of the honeybees.

"There'll probably be anywhere from 30- to 60-percent failure with a lot of these queens that won't over-winter," says Bob Hickey, chairman of the association's Queen Rearing Initiative.

He says most backyard beekeepers just buy new bees every year — maintaining, but not substantially increasing or strengthening, the bee stock.

When the group read about heartier, Northern queens being bred at Minnesota State University, members decided to work on breeding their own better bee.

"We purchased instrumentally inseminated queens with hygienic traits that will fight off Varroa mites, viruses and diseases," Hickey says.

The queens also have been bred with Russian bees for a better over-wintering ability, and Hickey says that in the past four years they've seen success.

"We have some that have over-wintered for three years in a row now," he says. "And we reproduce every year from the ones that have the best qualities of those genetics. So, we're really fast-forwarding Darwinism, basically." 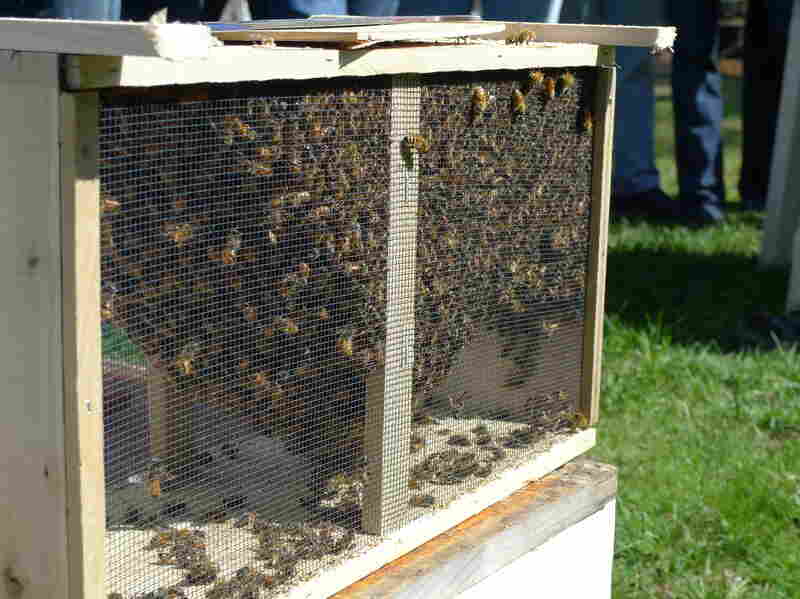 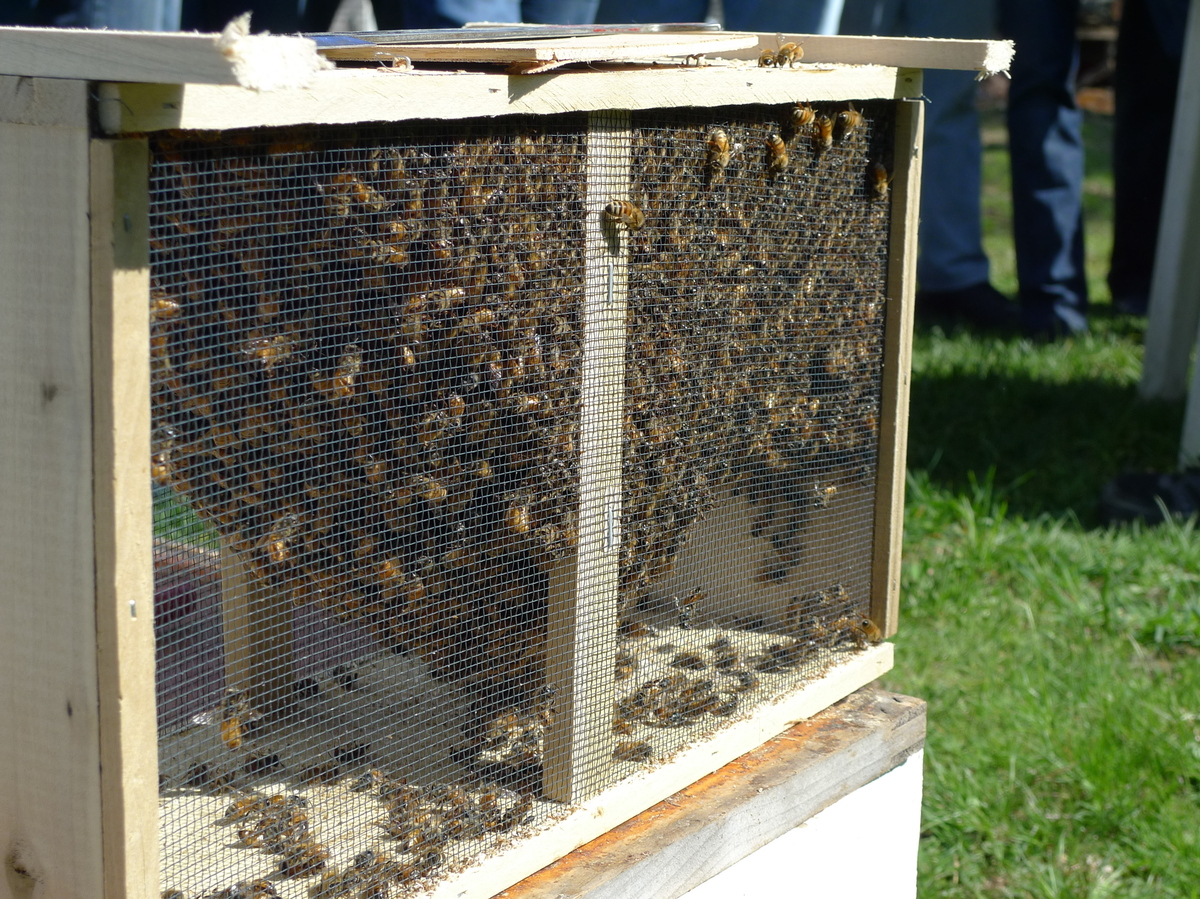 The Plymouth County Beekeepers Association distributed more than 500 crates of honeybees this spring.

They hope these queens will produce offspring that can also survive a Massachusetts winter.

While this type of selective breeding is happening at many universities and research centers, few amateur beekeeping societies have taken up the task, says Tom Rinderer, a honeybee researcher at the USDA.

His lab produces the type of bee breeds that the Massachusetts beekeepers are using; some of those bees go to commercial producers and some go to boutique backyard breeders.

"It's difficult for somebody to commercialize that," he says. "So there's still a need for folks to take what is available, bring it into their area and then kind of reselect and fine-tune the genetics of those bees for their own area. So, it's a great thing to hear. I congratulate them."

The new beekeepers in Plympton are learning how to manage their bees. This year, they'll work with those Southern ones. But, Hickey says, they hope slowly to replace them with the Northern-bred bees.

Until then, Hickey says he'll keep handing out Southern bees and training residents to care for them. So when they get their first hearty, Northern queen, they'll be ready.