Accessibility links
Book Review: 'Algerian Chronicles' By Albert Camus, Translated By Arthur Goldhammer Albert Camus' Algerian Chronicles, finally available in translation, collects essays, columns and speeches from the writer's days as a young journalist. Camus was criticized for his moderate approach to the French-Algerian war, but reviewer Jason Farrago says Chronicles is a guide to "how to be just in a difficult world."

Camus' 'Chronicles': A History Of The Past, A Guide For The Future

Camus' 'Chronicles': A History Of The Past, A Guide For The Future 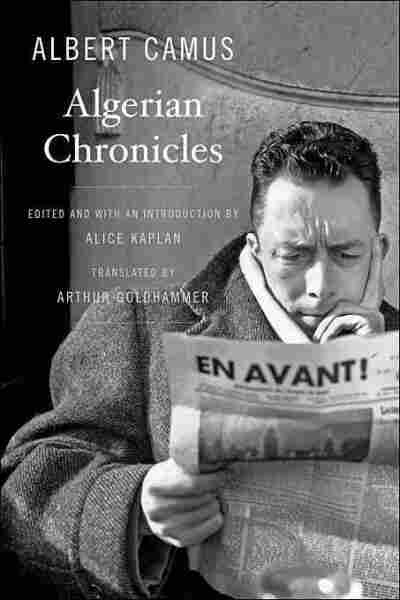 This year marks the centenary of the birth of Albert Camus, the great novelist of existentialism. It's a movement that many Americans think of as quintessentially Parisian, born of cafe-table philosophizing and fueled by packs of Gauloises. But Camus wasn't a native of metropolitan France. He was born and raised in Algeria into a pied-noir family ("black foot," the phrase used to describe descendants of French settlers), grew up in working-class Algiers, and pined for north Africa long after he moved to the French capital in 1942.

His most famous novels — The Stranger, which depicts a senseless murder under the Mediterranean sun; The Plague, with its chaotic scenes of a quarantined port city — are Algerian to the core, and yet Camus has often been criticized, not least by Arab critics such as Edward Said, for paying too little attention to Algerians' plight. It's true that he was never a revolutionary, and that in comparison to fellow existentialist Jean-Paul Sartre he can seem almost conformist. But Camus was a far more engaged writer than his critics have allowed, and the essays, columns and speeches collected here make a strong case for his continued relevance.

Camus' Algerian Chronicles, originally published in 1958 and now finally available in English, span two decades of colonial history, from before World War II to the foundation of the Fifth Republic. The author began his career as a young journalist in Kabylia, the mountainous coastal region populated by a Berber-speaking minority. There he witnesses a humanitarian disaster caused by severe drought, and he laments the inability of writers like himself to get anyone to pay attention. "The truth," Camus thunders, "is that we are living every day alongside people whose condition is that of the European peasantry of three centuries ago, and yet we, and we alone, are unmoved by their desperate plight." That theme of French indifference to Algerian life and suffering comes up over and over in this book. And things do not get any more amicable when the revolutionary National Liberation Front (FLN), which is still the largest political party in contemporary Algeria, begins its campaign of resistance.

The Algerian war, a conflict of devastating violence that saw the French army resort to widespread torture, devastated Camus. His whole family still lived in Algiers. Though he did not support total Algerian independence (he believed in a quixotic, Swiss-style "confederation" of France and its former colonies), the French forces' brutality horrified him. Acts of torture, he told the French, "do us more harm than a hundred enemy guerrillas." At the same time, he refused to support the FLN's use of terrorism; defending violence against innocent people in the name of anti-colonialism was "a casuistry of blood" that he had no truck with, unlike many French intellectuals of the time.

"I need to let you know how I feel," Camus writes to an Algerian militant in a 1955 open letter. "Believe me when I tell you that Algeria is where I hurt at the moment, as others feel pain in their lungs." It's a hugely powerful simile, and not only because Camus suffered and nearly died from tuberculosis as a young man. Algeria was his oxygen — and between colonial repression and anti-colonial violence, Camus felt himself being asphyxiated.

When Camus published his Algerian Chronicles in 1958, the reaction in the French world of letters was distinctly muted. The author may have just won a Nobel Prize, but his moderate stance was unwelcome at a moment when France and Algeria were facing a state of emergency. That May, right-wing elements in the French army attempted a coup d'état in Algiers, accelerating a political crisis that eventually led, in October 1958, to Charles de Gaulle's installation as president. Four years later, Algeria won its independence, though Camus did not live to see it; he died in a car crash in 1960, aged just 46.

Today, although his failure to support full independence for Algeria seems off the mark, Camus stands as a powerful voice against violence and extremism, and the very late appearance of these essays in English could not have come at a better time. (Alice Kaplan, the book's editor, provides an insightful introduction; Arthur Goldhammer, a Harvard fellow and an astute blogger on contemporary French politics, is the translator.) With the future of the Arab spring uncertain and with terrorism back on the front page, these Algerian Chronicles are not only history. They're also guides for how to be just in a difficult world.