Accessibility links
With No Unified Database, Many Murder Victims Remain Nameless Israel Keyes confessed to murdering as many as 11 people across the country before killing himself in 2012. But Keyes didn't name his victims, and efforts to identify them have been frustrated by a lack of a federally mandated national missing persons database. 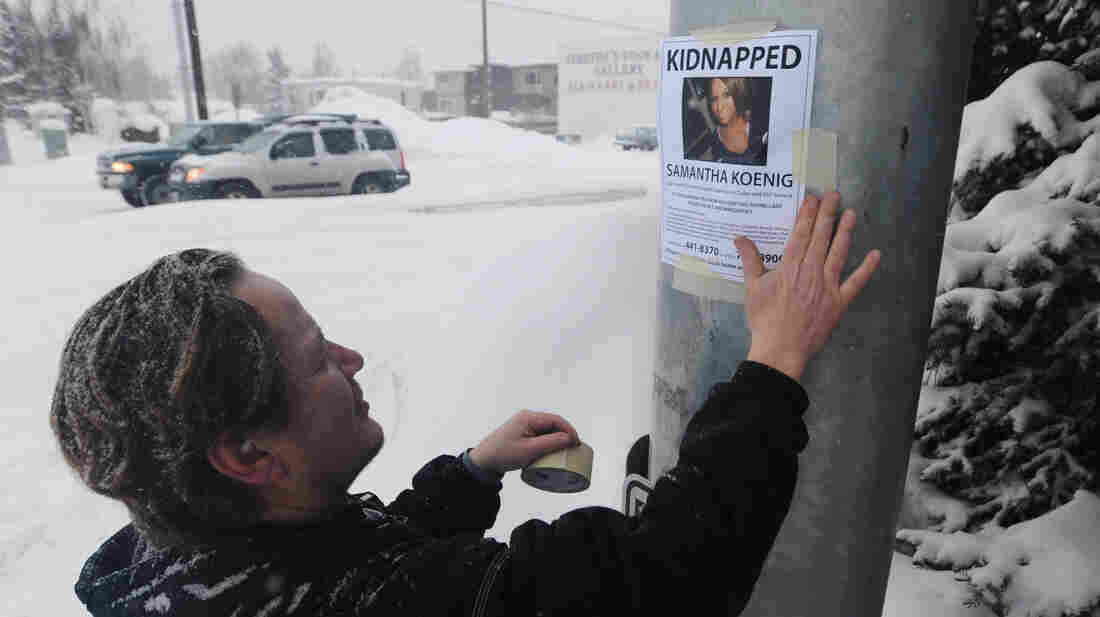 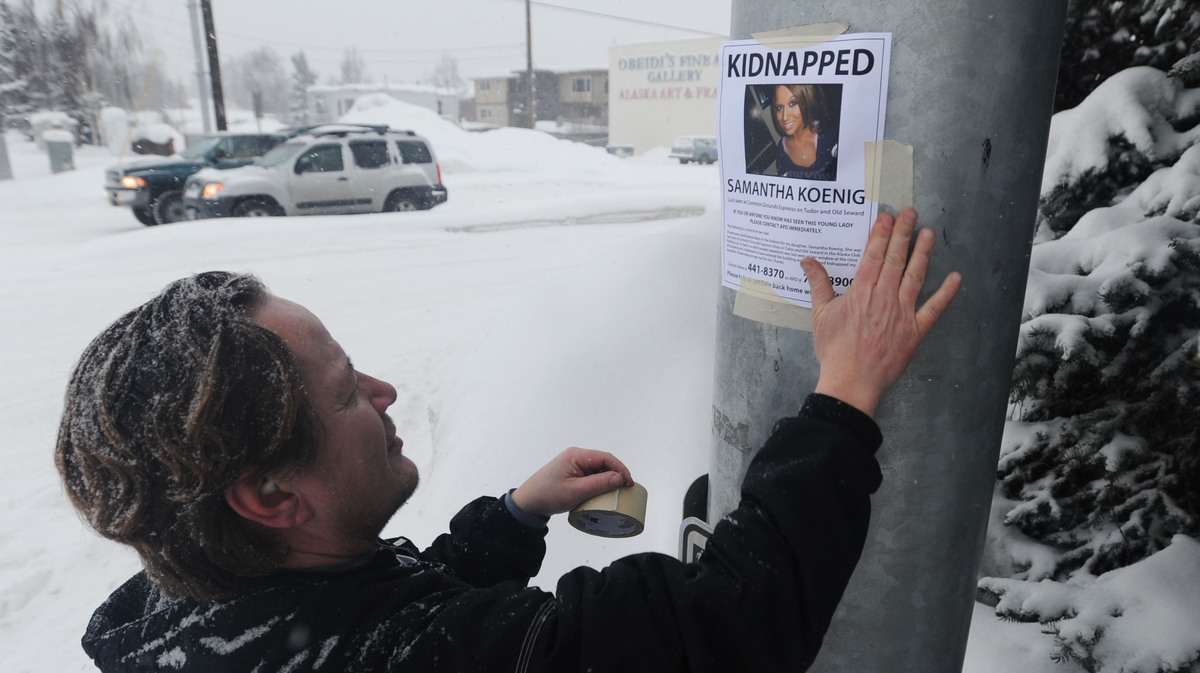 A family friend posts fliers after Samantha Koenig's disappearance in 2012. Koenig's father is now an advocate for a mandatory national missing persons database.

A serial killer who committed suicide in an Alaska jail last year confessed to murdering at least 11 people across the country. But Israel Keyes didn't name names, and investigators trying to figure out who he killed are running into a major stumbling block: There is no unified, mandatory national database for missing persons.

One of the few known victims was Anchorage resident Samantha Koenig. She was selling coffee at an espresso stand outside a gym when Keyes abducted and killed her. Her father, James, a burly man with icy blue eyes, holds back tears as he talks about the ordeal.

"I miss her laugh and her smile and her eyes and hearing 'Daddy' come out of her mouth," he says. "That's one of the greatest things to hear, is my name called from her voice."

Even though the mystery of his own daughter's disappearance has been solved, Koenig has stayed involved with advocates for missing persons, trying to figure out who else Keyes killed.

Struggling To Piece Together Different Databases

In a dimly lit back office at the Anchorage Police Department, investigators are piecing together Keyes' travels on a map. They say he may have killed other people in places he traveled to over the past decade. And he traveled a lot: to Seattle, Los Angeles, Houston and Chicago, among other cities.

Anchorage police officer Jeff Bell says that because Keyes killed himself, they're trying to make this map of travels speak for him, but it's difficult because of the kinds of victims he picked.

"He claimed that he could look at someone and decide [that] some people just look like they would be more missed than others," Bell says.

Bell, who interrogated Keyes extensively, says Keyes preyed on people in remote locations, like in parks and along trails. With only a few exceptions, Keyes took the names of his victims to the grave. And Bell says using multiple existing missing persons databases run by many different parties — state, county and local officials as well as nonprofits — is inconsistent, confusing and overwhelming. 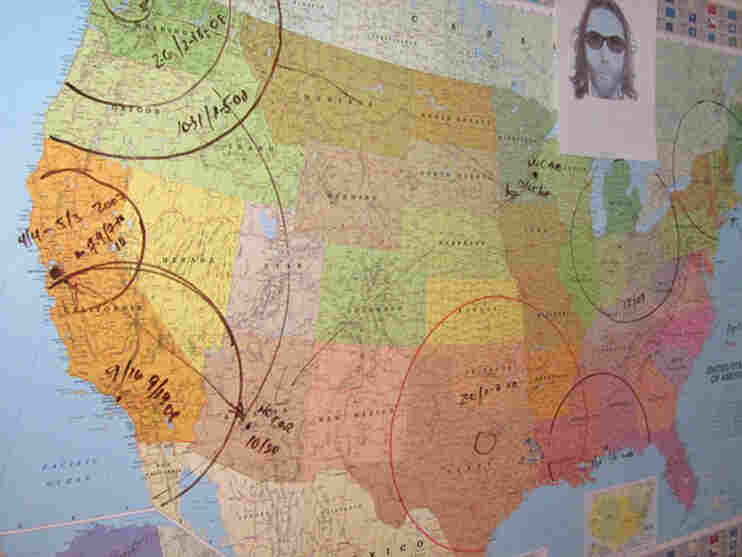 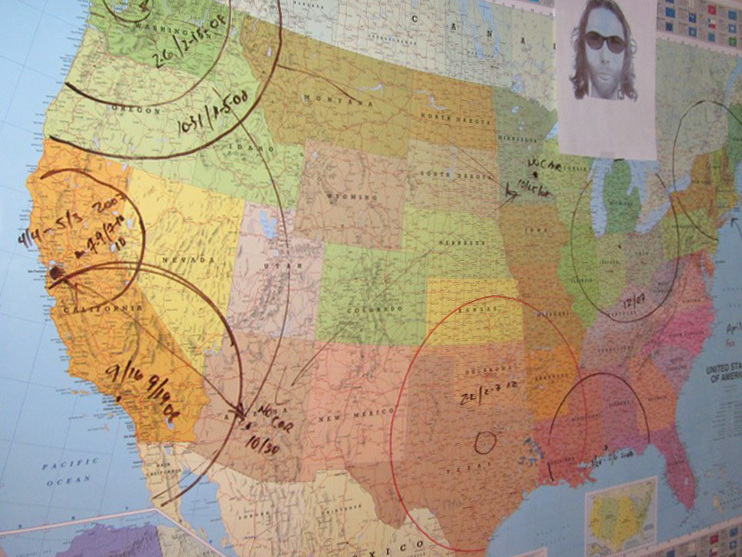 A map at the Anchorage Police Department tracks the travels of confessed killer Israel Keyes. Investigators say the lack of a unified missing persons database is frustrating efforts to identify other potential victims.

"I remember getting the list of missing people and it was depressing because there was a printed stack of papers that was at least 3 inches thick," Bell says.

Although Bell says it sometimes seems futile, he still rakes through evidence and combs through the killer's home computer, hoping to identify other victims.

"You always feel like you've missed something or that there's gonna be an obvious clue that stands out that we missed."

Bell isn't working the Keyes case alone. The FBI's lead agent, Jolene Goeden, wishes there were a better option, too. Using what they've learned from the Keyes case, Bell and Goeden say it's critical that there be a single, national database for missing adults that everybody uses.

"Unlike children, where you have the National Center for Missing and Exploited Children, there is no such thing for adults," Goeden says.

But the National Center for Missing and Exploited Children is federally mandated and has long-term government funding. The closest thing to that for adults is the National Missing and Unidentified Persons System, or NamUs, which is funded by the Justice Department. But it's not required by Congress and doesn't have a long-term funding source.

Todd Matthews, director of communications for NamUs, helps run the database out of the University of North Texas. "A federal mandate would help to bring the compliance and force people to do what they need to do to get the cases into the system," he says. "You know, a one-stop shop."

Creating the unified database that many local, state and national law enforcement officials want has become something of a cause for Koenig.

Knowing the fate of his daughter, Koenig says, is still a struggle. "That's the hardest part of my days anymore, is waking up and reliving it every day in the hopes it's a nightmare, and she's gonna come walking through the door any minute."

But knowing, he says, is better than not knowing. Estimates put the number of unidentified human remains in the U.S. at around 40,000. Somewhere among them are likely the names of Israel Keyes' other victims.