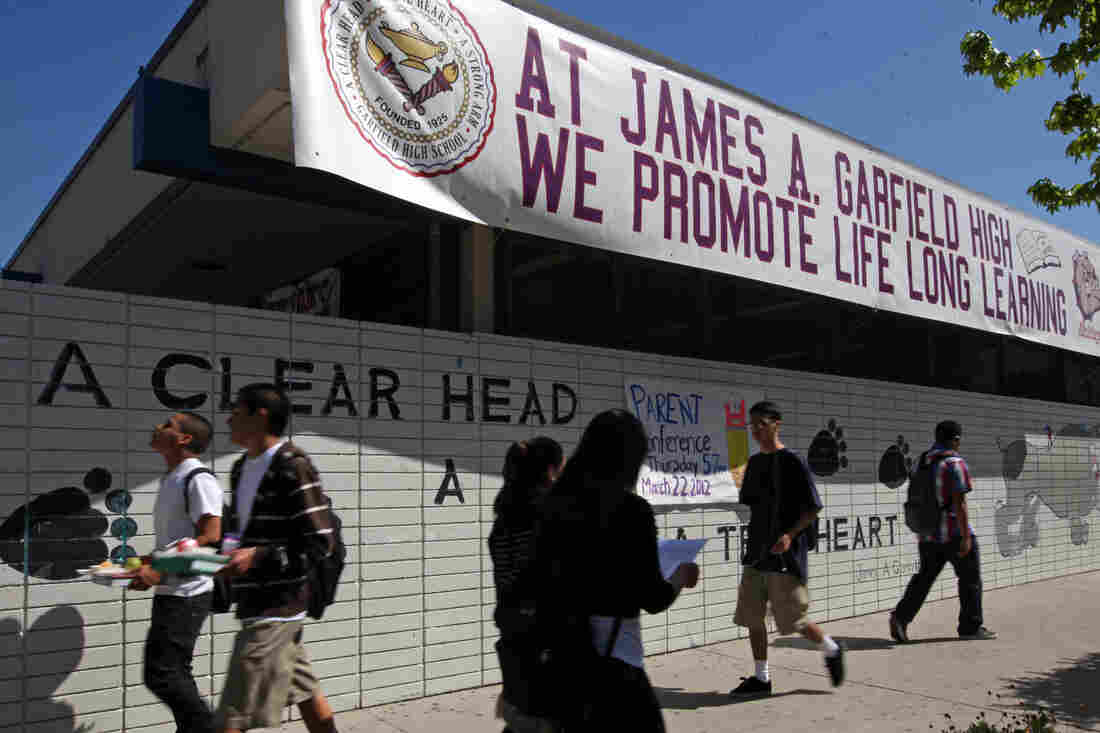 When Garfield High School in Los Angeles stopped suspending students for "willful defiance" several years ago, it saw suspensions drop from more than 600 to just one. Tuesday, the Los Angeles Unified School District board voted to follow suit in all LA schools. Reed Saxon/AP hide caption 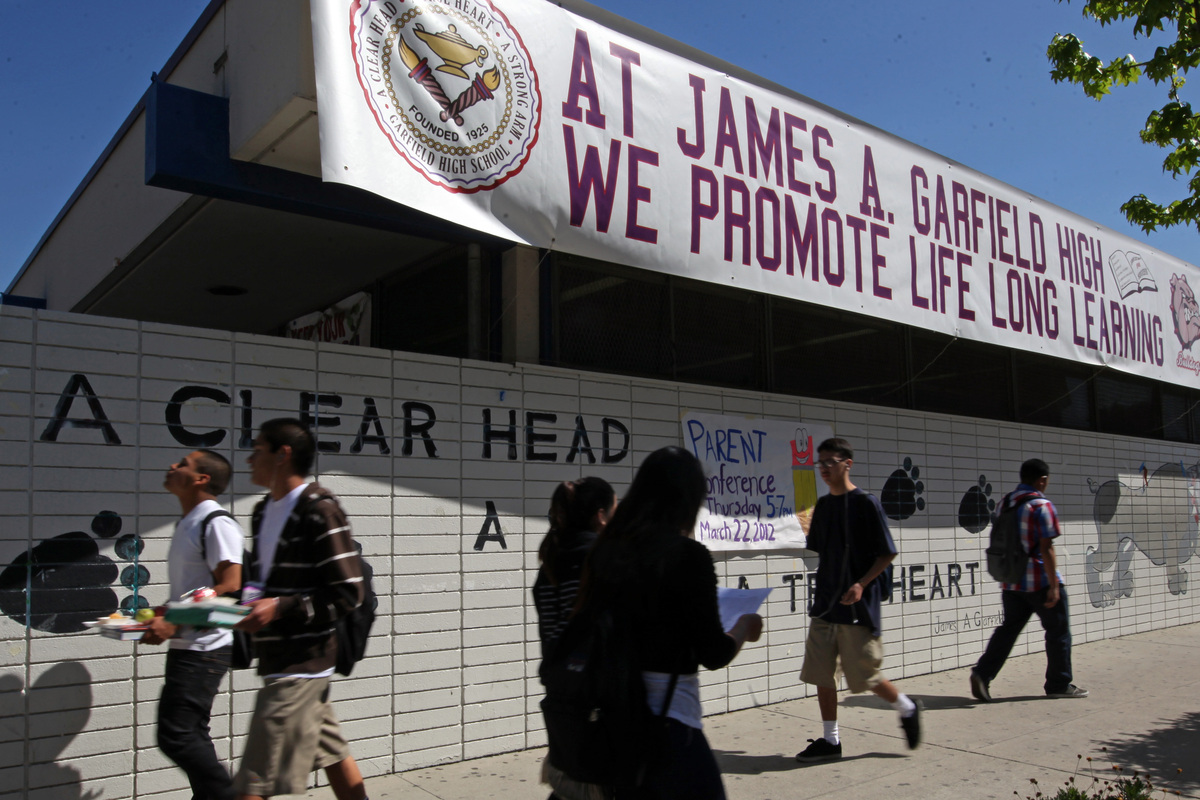 When Garfield High School in Los Angeles stopped suspending students for "willful defiance" several years ago, it saw suspensions drop from more than 600 to just one. Tuesday, the Los Angeles Unified School District board voted to follow suit in all LA schools.

School suspensions are a big issue in California. Last year, schools handed out 700,000 of them. But the Los Angeles Unified School District took a step to change that this week when it voted to ban suspension of students deemed "willfully defiant."

Before the vote, the district maintained a zero tolerance policy for students who failed to comply, in any way, with any policy or direction given by teachers or school administrators — covering everything from mouthing off to wearing baggy pants. These suspensions accounted for almost half of those handed down in the state last year.

High school senior Joshua Ham has experienced one of those suspensions firsthand. Checking his grades with less than a month to go until graduation, he sees mostly B's and A's. But he also confesses to being "very active as far as talking in the classroom — you know, the class clown."

That hasn't gotten Joshua into much trouble lately (maturity, he says), but there was a time that it did — and it resulted in a three-day suspension from his school in South LA.

His mother, Cecilia Blake, reacted like you'd expect: "I really wanted to put my foot up his rear end, but I had to control myself."

'Home Watching TV, Not Learning Anything'

Miss Blake, as she's called by her students, works for the Los Angeles Unified School District. She's seen how suspensions play out, and she doesn't think they're effective.

"To me, suspension really doesn't work, because 99.9 percent of the time when [kids] get suspended, guess where the parent is at? On the job," Blake says. "So they're at home watching TV anyway. So what are they learning? They're not learning anything."

CADRE, a parent organizing group in South LA., keeps data on suspensions in the area's schools. Maisie Chin, CADRE's executive director, says "the data actually shows that if you're just suspended once, you are at great likelihood for dropping out."

"And because of that, you're three times more likely to become involved in the criminal justice system," she adds.

To Get Kids To Class, L.A. Softens Its Hard Line

And the phenomenon isn't limited to South Los Angeles. Nationwide, according to a recent study by the Civil Rights Project at the University of California, Los Angeles, African-American students are three times more likely to be suspended than whites. English learners also have a higher likelihood of suspension.

Those findings have led to federal investigations in states from Washington to Florida. "There's a real call for change because of the disparate impact on these subgroups," says Dan Losen, who co-authored the report.

You could hear that call outside of the LA school board meeting Tuesday. Hundreds of students gathered downtown to testify about the problem of zero tolerance and to celebrate the end of willful defiance.

But some teachers and administrators aren't as happy about the change. The ban, they say, will make it harder for them to discipline their students. It's a tool lost, and they're not seeing any resources to replace it.

There are some places where the abandonment of willful defiance — regardless of resources — has worked out.

Garfield High School is in East LA, a low-income neighborhood that's predominantly Latino. Garfield's principal, Jose Huerta, is all high-fives and "hellos" on the playground, but his tone changes when it comes to suspensions.

"Suspensions are off the table at Garfield High School. I can't teach a kid if he's not in school," Huerta says.

And he means it. In the 2008-2009 school year, Garfield had 638 suspensions, but in the past three years only one. As a result, Huerta says, the school's attendance rates are in the 96th percentile, the graduation rate is higher than the district as a whole and, he adds, "We just got word ... that 27 of our students were accepted to UCLA. That's the highest of any high school in California."

But it's possible he'll soon have competition. A bill that would restrict the use of willful defiance statewide was introduced in the California Legislature earlier this year.