Accessibility links
Movie Review - 'Bidder 70' - Tim DeChristopher, Still Raising His Hand On Environment Scientist Terry Root, author and activist Terry Tempest Williams and filmmaker Robert Redford all turn up in this documentary on eco-activist Tim DeChristopher, who bid on — and won — mineral rights to a chunk of federal land just to tie them up. He was prosecuted and sentenced to federal prison.

'Bidder 70,' Still Raising His Hand To Be Heard

'Bidder 70,' Still Raising His Hand To Be Heard 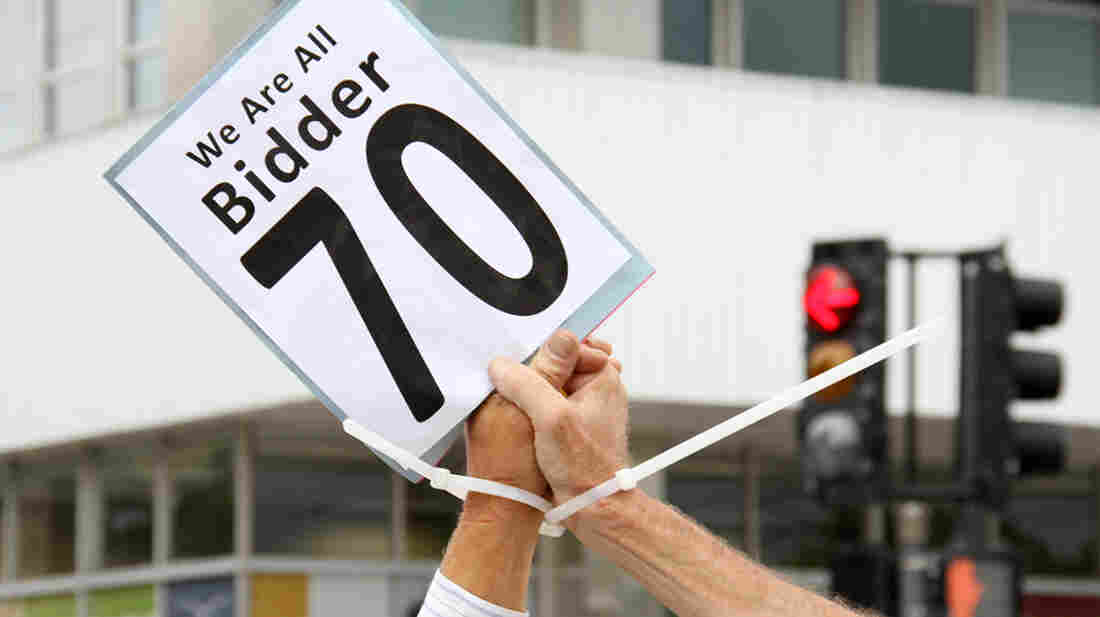 Supporters of environmental activist Tim DeChristopher picket outside his criminal trial. The economics student ran into trouble with the federal government when he bid on — and won — mineral rights he had no intention of exploiting. First Run Features hide caption

In its final months, the George W. Bush administration hastily organized a mineral-rights auction for federal land in Utah, much of it near national parks. Environmentalist and economics student Tim DeChristopher attended the sale and — impulsively, he says — bid on and won 22,000 acres he had no intention of exploiting.

The feds came down on him like a ton of oil derricks. DeChristopher was threatened with as many as 10 years in prison, and ultimately spent 21 months behind bars.

The activist's supporters and sympathizers will likely be stirred by Bidder 70, Beth and George Gage's polemical documentary about the case. But those who want more background or context may be less taken with the film, which seems designed primarily for teach-ins and rallies.

In the filmmakers' defense, their approach was significantly shaped by DeChristopher's opponents. No one from the Bureau of Land Management or its parent agency, the Interior Department, would consent to an interview. Thus the movie can present no official explanation of the case — or why it wasn't dropped when the Obama administration took power, canceling many of the very land-rights leases DeChristopher had tried to block.

That leaves the Gages with the man and his fans, who include actor-environmentalists Robert Redford and Daryl Hannah and author-environmentalists Bill McKibben and Terry Tempest Williams. Offering less direct support are the likes of U2 and Billy Bragg, whose storming songs only add to the sense that Bidder 70 is an advertorial for ecological virtue. 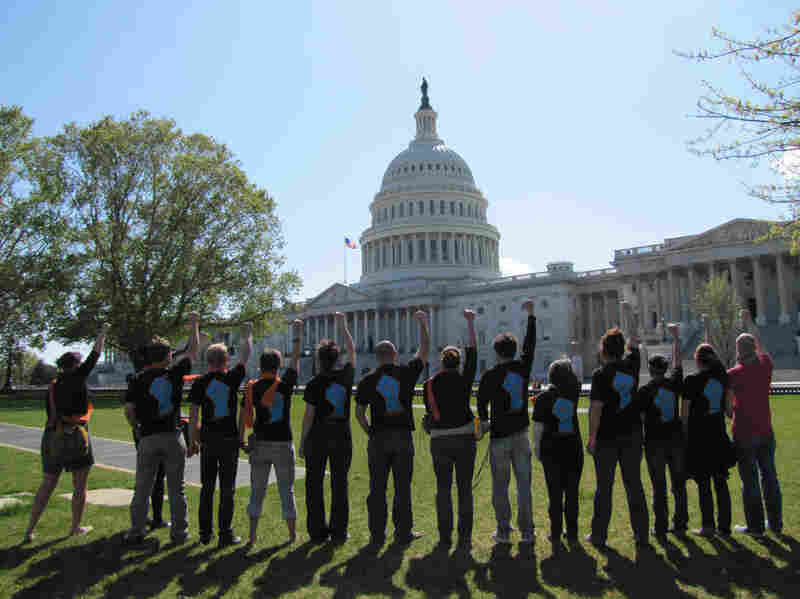 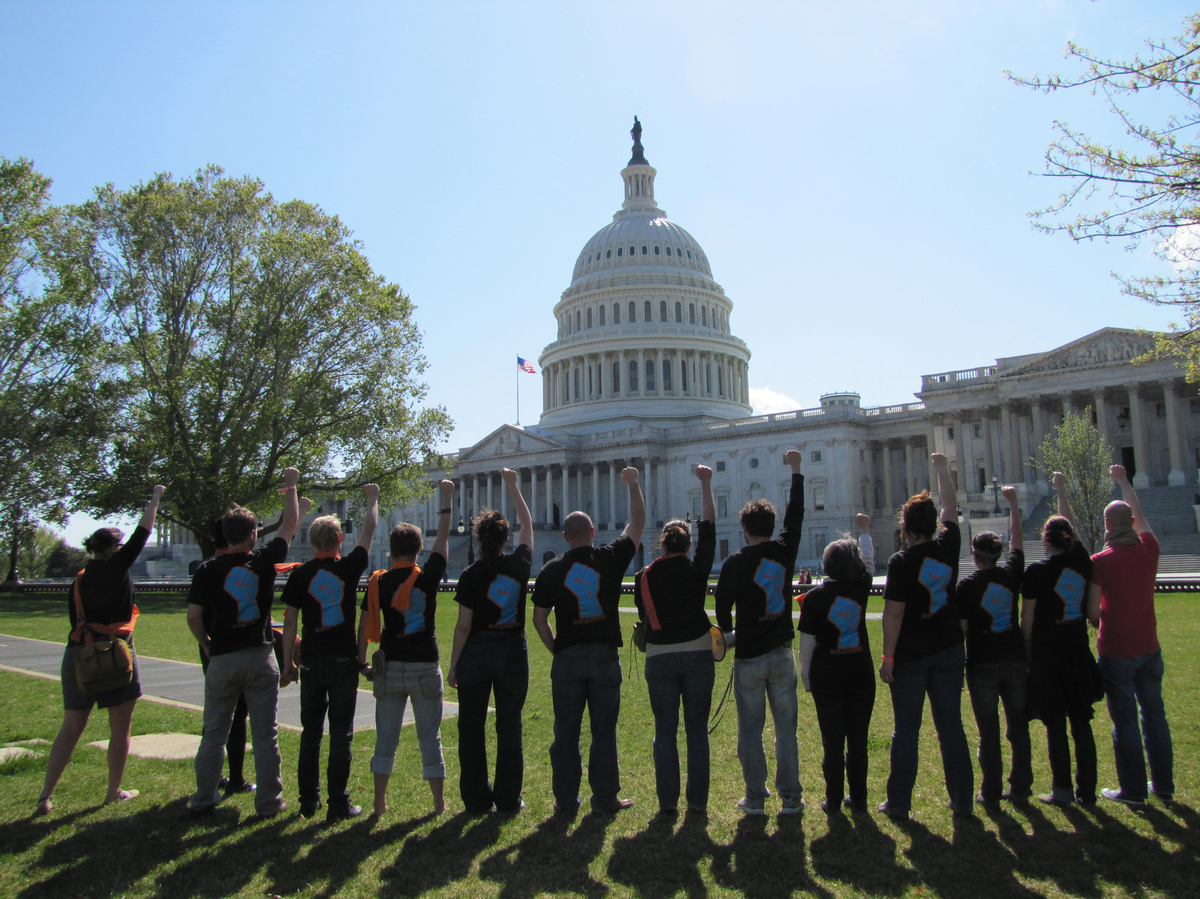 DeChristopher (center) and other members of his Peaceful Uprising environmental action group brought their discontent to Washington, as documented in Beth and George Gage's film. DeChristopher would eventually serve 21 months in federal prison.

Since DeChristopher's trial was postponed several times, the filmmakers were able to follow him for several years. He's a vigorous and interesting character, with the rhetorical skills of a veteran speechifier.

Yet in private moments, he seems younger than the prematurely balding 27-year-old he was when the case began. The movie shows him at home on the morning of his sentencing, making breakfast and drinking milk directly from the bottle. It also revisits his West Virginia childhood, which encouraged his love of nature and his outrage at its despoiling.

Less informatively, Bidder 70 scants the legalities of the case. Clearly, DeChristopher peeved the Bureau of Land Management and the oil and gas industries, but the movie doesn't detail which law or laws he actually broke.

After Redford calls the auction bids "a peaceful protest," the documentary quickly sketches the history of civil disobedience, invoking some names that may be familiar: Mahatma Gandhi, Martin Luther King Jr. and such. But the DeChristopher case really speaks to a newer phenomenon: the attempt to elevate economic interests over freedom of speech, wherein a growing number of right-wing lawyers and judges are interpreting (or reinterpreting) laws to privilege corporations over individuals, and elevate business efficiencies over the messy, time-wasting distractions of full public debate.

DeChristopher's primary concern is climate change, which is no small issue. But Bidder 70 would be more compelling if it had used the U.S. government's assault on the ad hoc activist to also discuss threats to the American political environment.