Accessibility links
Water Trapped For 1.5 Billion Years Could Hold Ancient Life Scientists have discovered water that was sealed in Canadian bedrock for nearly half of Earth's history. It may contain the descendants of ancient microbes. The discovery could give scientists new insights into early life on Earth and inform the search for life on other planets. 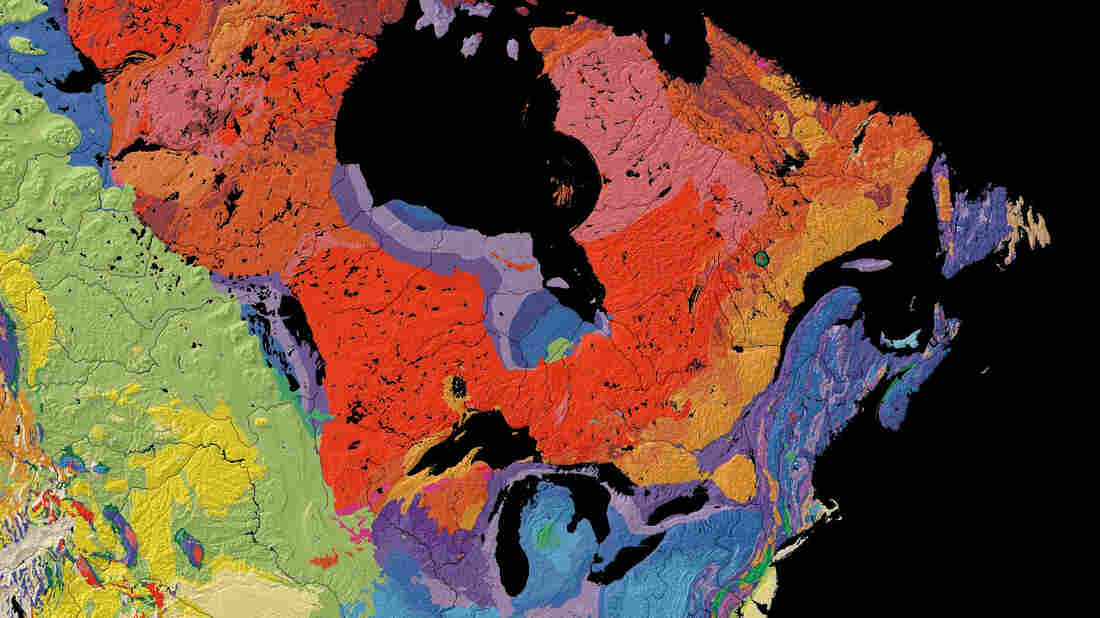 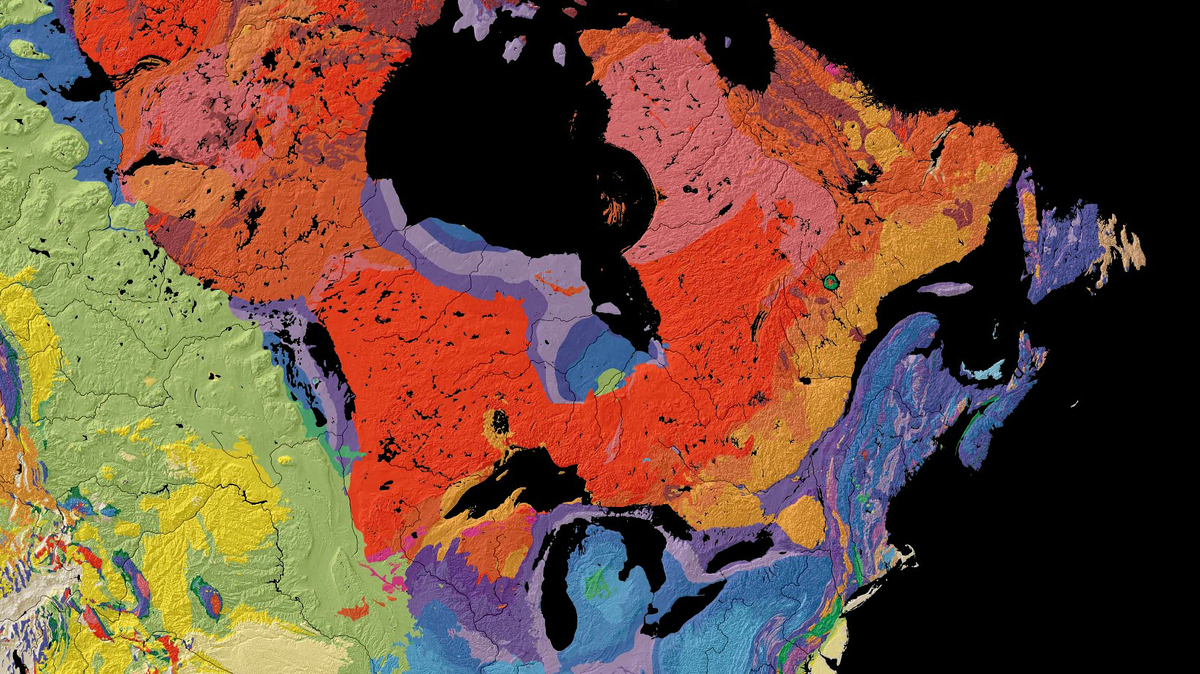 This map, from the United States Geological Survey, shows the age of bedrock in different regions of North America. Scientists found ancient water in bedrock north of Lake Superior. This region, colored red, was formed more than 2.5 billion years ago.

Scientists have discovered water that has been trapped in rock for more than a billion years. The water might contain microbes that evolved independently from the surface world, and it's a finding that gives new hope to the search for life on other planets.

The water samples came from holes drilled by gold miners near the small town of Timmins, Ontario, about 350 miles north of Toronto. Deep in the Canadian bedrock, miners drill holes and collect samples. Sometimes they hit pay dirt; sometimes they hit water, which seeps out from tiny crevices in the rock.

Recently, a team of scientists (who had been investigating water samples from other mines) approached the miners and asked them for fluid from newly drilled boreholes.

Greg Holland, a geochemist at Lancaster University in England, and his colleagues wanted to know just how long that fluid had been trapped in the rock. So they looked at the decay of radioactive atoms found in the water and calculated that it had been bottled up for a long time — at least 1.5 billion years.

"That is the lower limit for the age," Holland says. It could be a billion years older. That means the water was sealed in the rock before humans evolved, before pterosaurs flew and before multicellular life.

As Holland announced this week in the journal Nature, this is the oldest cache of water ever found.

But how did it end up underneath that gold mine in northeastern Canada? Where did it come from?

"The fluids that we see now are actually preservations of ancient oceans," Holland says.

About 2.7 billion years ago, the landscape of small-town Timmins looked a bit different. Beneath prehistoric seas, tectonic plates were spreading, and magma was welling up to form new rock. As the rock matured under heat and pressure, water was trapped inside tiny cracks.

The rock drifted around the globe for eons, helping form continents and mountain ranges, and all the while it kept its cargo of water sealed up tight inside.

"It's managed to stay isolated for almost half the lifetime of the Earth," Holland says. It's a time capsule. And it doesn't just hold water. "There's a lot of hydrogen in these samples."

That's significant because hydrogen is food for some microorganisms. Hydrogen-eating microbes have been found deep in the ocean and in South African mines where chemical reactions in the rock produce a steady supply of hydrogen. 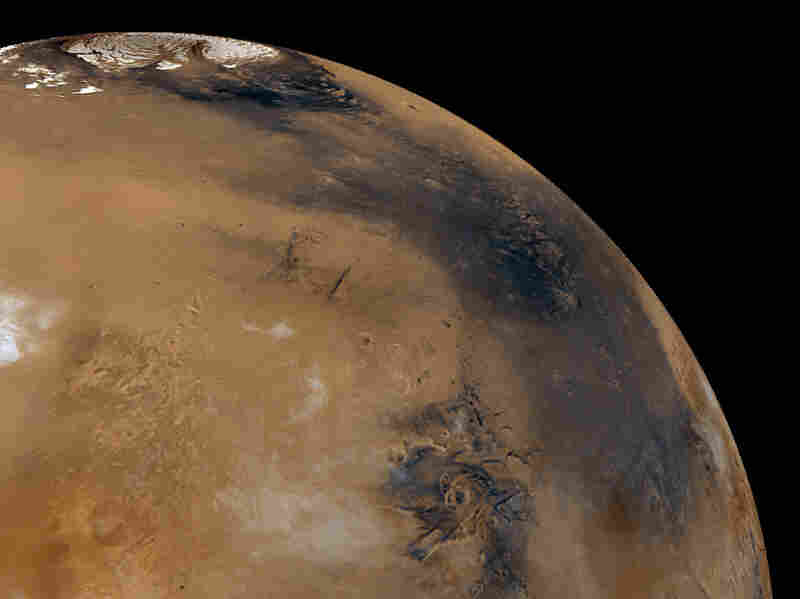 Mars, seen in this composite image, has a lot of water in its polar ice caps. If water is also trapped in the planet's crust, experts say, it could house microbial life. NASA/JPL hide caption 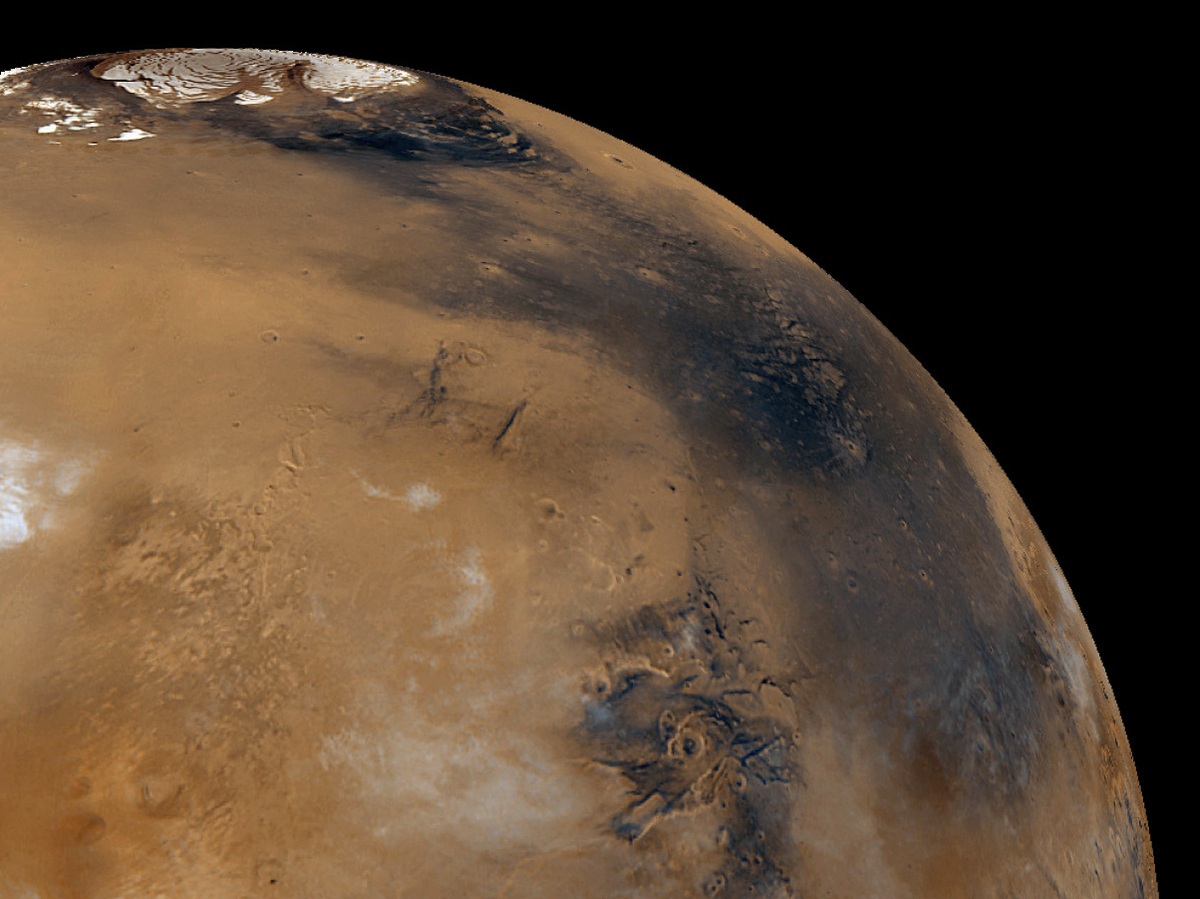 Mars, seen in this composite image, has a lot of water in its polar ice caps. If water is also trapped in the planet's crust, experts say, it could house microbial life.

And that hydrogen, says Holland, "could provide the energy for life to survive in isolation for 2 billion years."

Holland's colleagues are now testing the water samples for evidence of microbes. They hope to have results within a year. If life is found, it would have evolved distinctly from the surface world and might give a unique insight into the earliest forms of life on Earth. Its discovery would also give hope to people searching for life in places that are even more remote.

Carol Stoker, a research scientist with NASA, is focused on searching for life on Mars.

"If you go back to the very early history of Earth and Mars, sort of the first billion years after the surfaces cooled, Earth and Mars looked very similar," Stoker says.

Both planets had vast surface oceans and thick atmospheres — they were good places for life to begin. On Earth, it did.

"The logic is if that happened on Earth, why shouldn't it have happened on Mars?" she says.

As Mars got colder and drier, surface life would have died off. But Martian microbes might still survive deep in the planet's crust — preserved in isolated pockets of water, just like the ones found in Canadian bedrock.