Accessibility links
Tina Brown's Must-Reads: On Luck, Good And Bad In the latest edition of Word of Mouth on Morning Edition, Steve Inskeep talks to Newsweek editor Tina Brown to get her reading recommendations.

Tina Brown, editor of the Daily Beast and Newsweek, joins NPR's Steve Inskeep again for an occasional feature Morning Edition likes to call Word of Mouth. She talks about what she's been reading and gives us some recommendations.

This month, her reading suggestions have a common theme: luck. Not good luck, not bad luck, but the often-ambiguous element of chance. 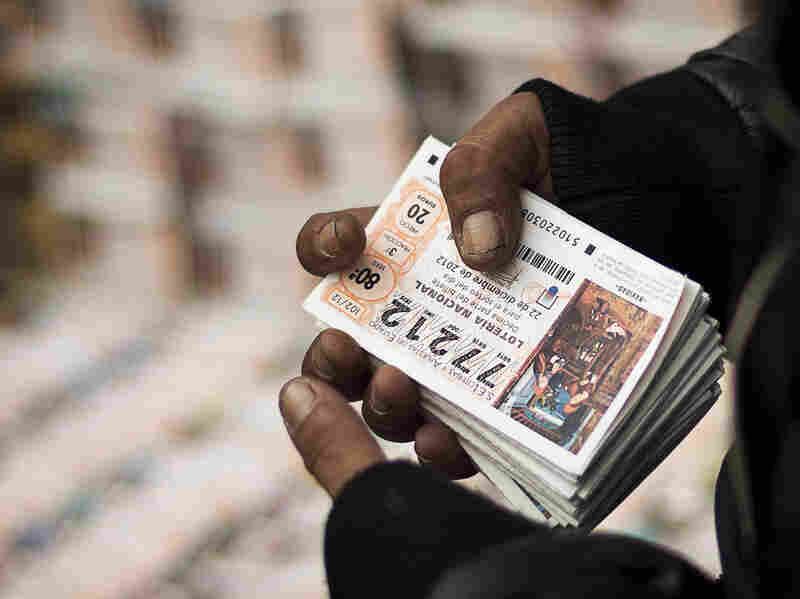 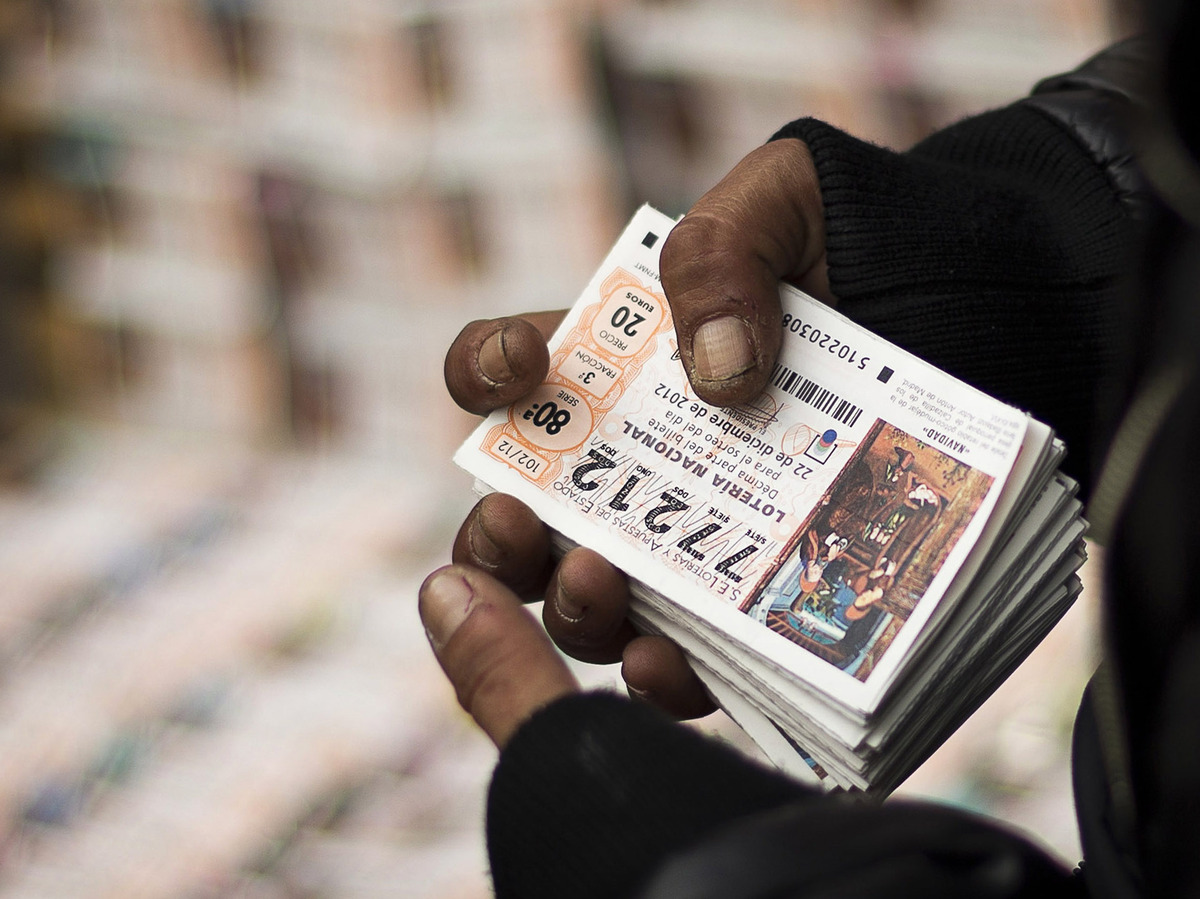 A seller holds a pack of tickets for Spain's 2012 Christmas lottery.

Brown's first selection is a Michael Paterniti article from GQ, which Brown calls "a fabulous piece of very offbeat reporting."

'Accessible To All': Spain Puts Hope In Holiday Lottery

"The Luckiest Village in the World" describes a poor farming village in Aragon, Spain, called Sodeto. The town decides to enter Spain's annual Christmas lottery, called "El Gordo" (the fat one); the prize is worth 720 million euros.

"The whole country participates in this kind of annual ritual of everybody hoping to win. And by some incredible piece of fortuitous luck, this little village wins," Brown says.

The article starts by describing the ecstasy of the win, but Brown says Paterniti's greatest strength is his exploration of the long-term consequences of this stroke of luck.

"He goes on to do what I absolutely love, when any reporter does [it]. He actually goes on to discuss what happens later. Because [after] this first wonderful rush, where everybody feels kind of morally blessed almost by this Michelangelo hand that has stretched down and saved their lives — it all begins to change. ... After a time what actually is shown is that while luck is democratic and touches everybody equally, money is secretive; money is selfish."

The villagers were supposed to share the money, but the neighbors begin to grow apart. They become suspicious of each other and protective of their winnings.

"They claim to possess fewer and fewer winning tickets than they first announced. You know, they start to hoard and not say what they've got. The people who said when they won that they're going to help this person, gradually those things are forgotten as they think about, well, no, maybe I'll keep it for myself and buy myself a new flat-screen TV.

"The luckiest person, in a sense, at the end of this story, is the loser who was the only person in the village who didn't buy a ticket. Because this guy who didn't win, who everybody felt very sorry for, at the end of the story he has decided to make a little movie with a Danish film crew about what actually happened in his village. And because he's done something, you know, himself, — because he's actually tried to do something — he feels actually happier and more at peace than really anybody in the village."

The moral of the story? "Luck isn't so lucky in the end," Brown says. "It's much better for the soul, in a sense, to work for your own rewards." 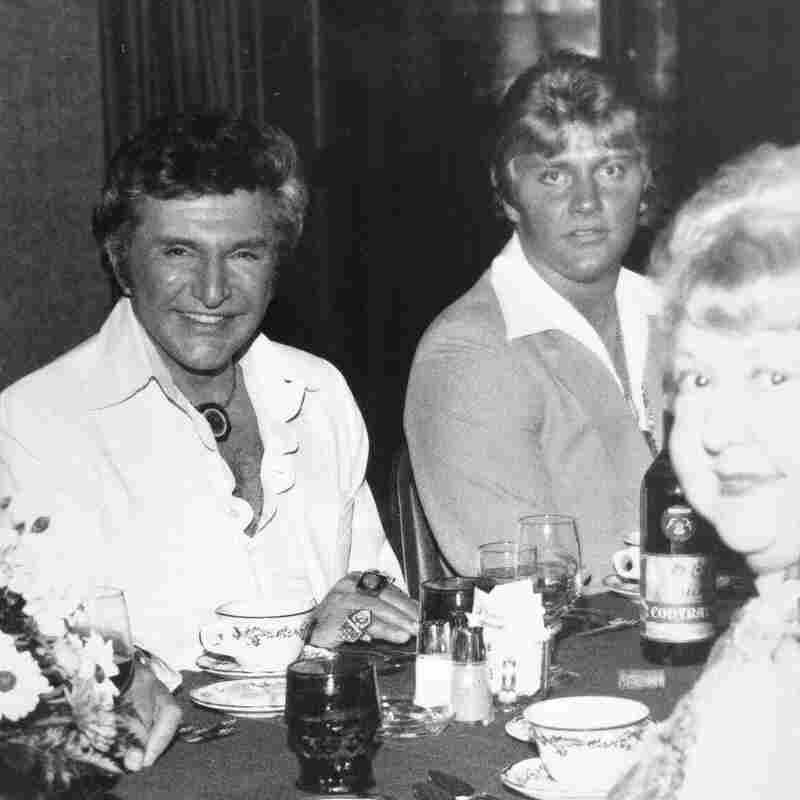 Entertainer Liberace (left), with Scott Thorson, often described during their time together as his bodyguard, chauffeur and confidant, at a Boston-area restaurant in 1981. Pete Anastasi/AP hide caption 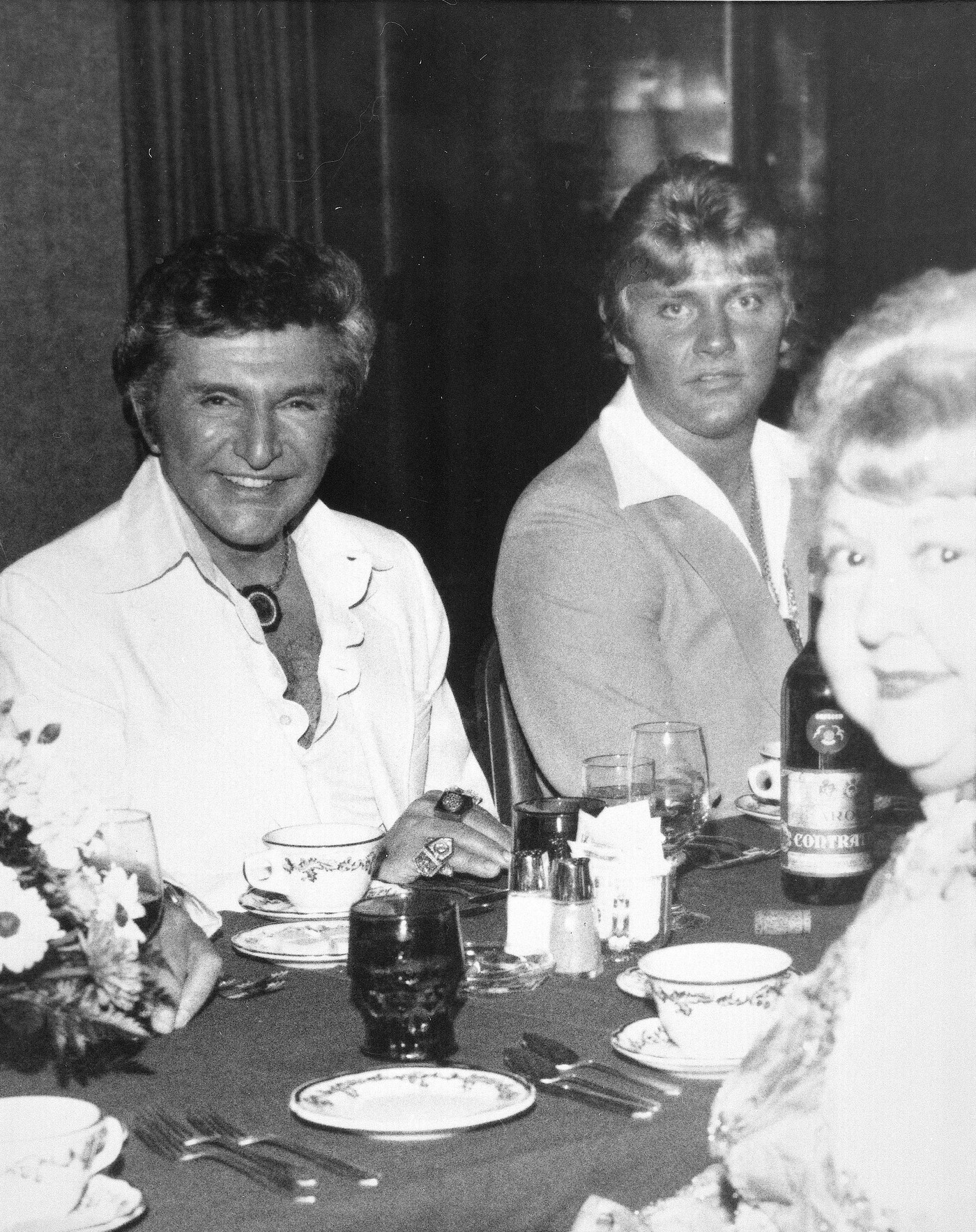 Entertainer Liberace (left), with Scott Thorson, often described during their time together as his bodyguard, chauffeur and confidant, at a Boston-area restaurant in 1981.

Brown's second pick is an article from The New York Times called "The Boy Toy's Story," about Liberace's lover Scott Thorson. Thorson was only 17 years old when he met Liberace, 40 years his senior, and he came from a rough background.

"He was an abused child of parents who treated him incredibly badly — from a rotten background," Brown says. "And Liberace fell absolutely, madly in love with him and moved him into his house. So much in love with him was he that [Liberace] actually insisted that [Thorson] drive him onstage in his limousine and open the door for Liberace when he got out, just so that he could see him onstage ... at all times."

It was an improbable change of lifestyle for Thorson.

Bob Freer Plays Not My Job With Questions About Liberace Nov. 27, 2010

But that wasn't necessarily good luck. "There's something very deeply creepy about this love affair," Brown says. Liberace persuaded Thorson to undergo plastic surgery — not just any surgery, but facial reconstruction that made him resemble Liberace himself.

"The ultimate act of narcissism," Brown calls it: "to really want to be in love with yourself."

"In order to lose weight, also to please Liberace, he gets addicted to amphetamines," Brown says. After five years, Liberace kicks him out, and Thorson sues him for millions of dollars in palimony — and loses, left with only $100,000.

"And so then the spotlight, again, leaves him," Brown says. "And like with the other story, what I find completely fascinating is looking at this guy since. What happens to this guy?"

Today Thorson, the subject of an upcoming HBO movie, is in prison for identity theft. "He has led a life of kind of petty crime," Brown says. "He's led a life where he became the lover of a famous gangster. He's at all times been involved in unbelievably sort of picaresque stories of crime and punishment. I will say one good thing about him: He no longer has the chin implant, which I think is a great redemption for him." 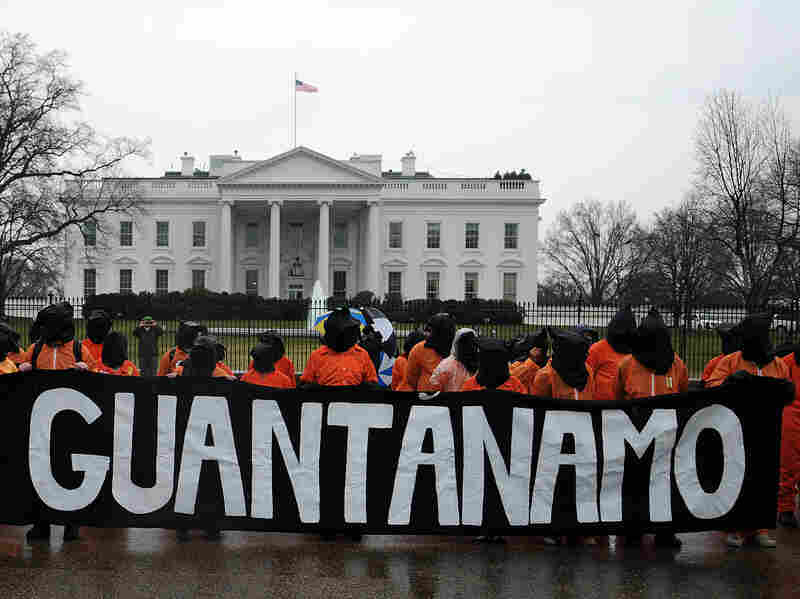 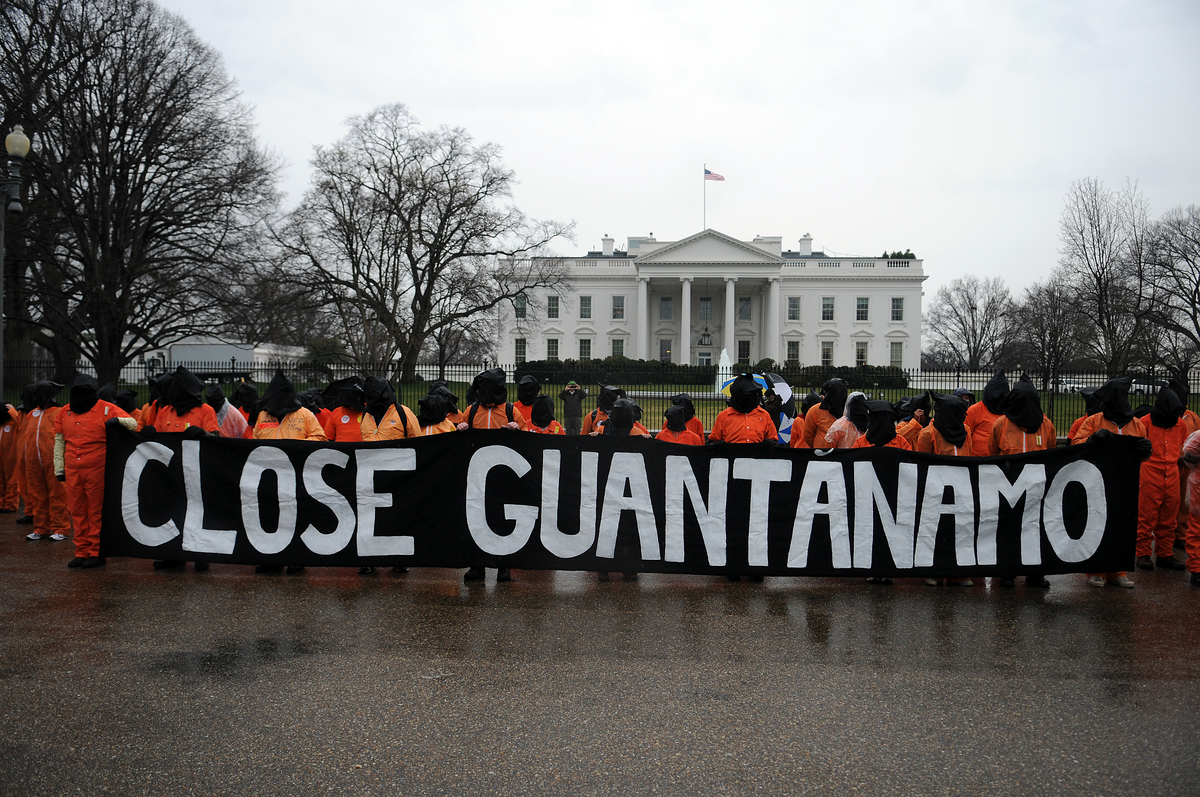 Protesters wear prison-style orange jumpsuits, handcuffs and hoods during a 2012 demonstration urging the government to close down the U.S. detention facility at Guantanamo Bay.

Brown's final story concerns luck of the political variety: specifically, President Obama's. Amid what Brown calls "a turmoil of scandals," a piece by Daniel Klaidman on one of Obama's failed campaign promises is running in Brown's own Newsweek.

"On the campaign trail, the president said he was going to close Guantanamo Bay," Brown says. After four years of skirting the question, Obama has raised the issue again in recent weeks.

"He's decided that he really has got to now address it, largely because there has been this appalling hunger strike in Guantanamo recently," Brown says.

Many of the striking prisoners have been detained at Guantanamo Bay for more than a decade.

In Guantanamo, Have We Created Something We Can't Close?

Klaidman's article points out that a challenge for anyone trying to motivate Congress to close Guantanamo Bay is that the prisoners there have little or no constituency.

"One of the great questions of this whole story is how to cajole self-interested lawmakers to take a major political risk," Brown says. "And Obama's answer seems to be that he's going to make his case, finally, to the public."

But if Obama wants to make up for years of inaction on Guantanamo Bay, his timing might be unlucky.

"My guess is that it will absolutely fall on deaf ears, given how little leverage he's got in the wake of the IRS scandal and the AP scandal and Benghazi — a trio of nightmares in his inbox," Brown says.