Accessibility links
Mel Brooks: 'I'm An EGOT; I Don't Need Any More' The screenwriter, producer, director and actor, whose name has become synonymous with American comedy, talks about his penchant for spoofs and his decades-long friendship with Carl Reiner. Brooks, who is among a handful of people who've won Emmy, Grammy, Oscar and Tony awards, is the subject of a new documentary on PBS. 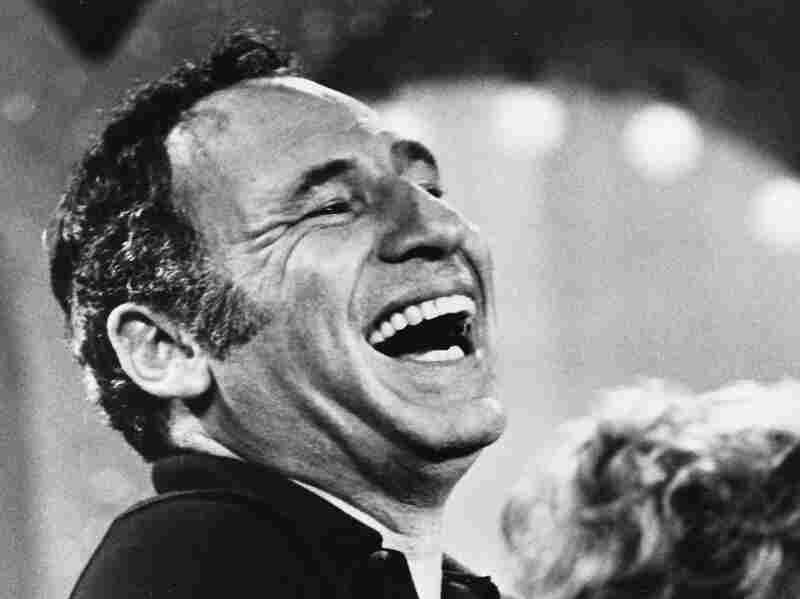 Comedian, writer, director, producer and actor Mel Brooks is one of only 11 people to have won Emmy, Grammy, Oscar and Tony awards. Others in the elite EGOT club include Mike Nichols and Whoopi Goldberg. Brooksfilms LTD hide caption 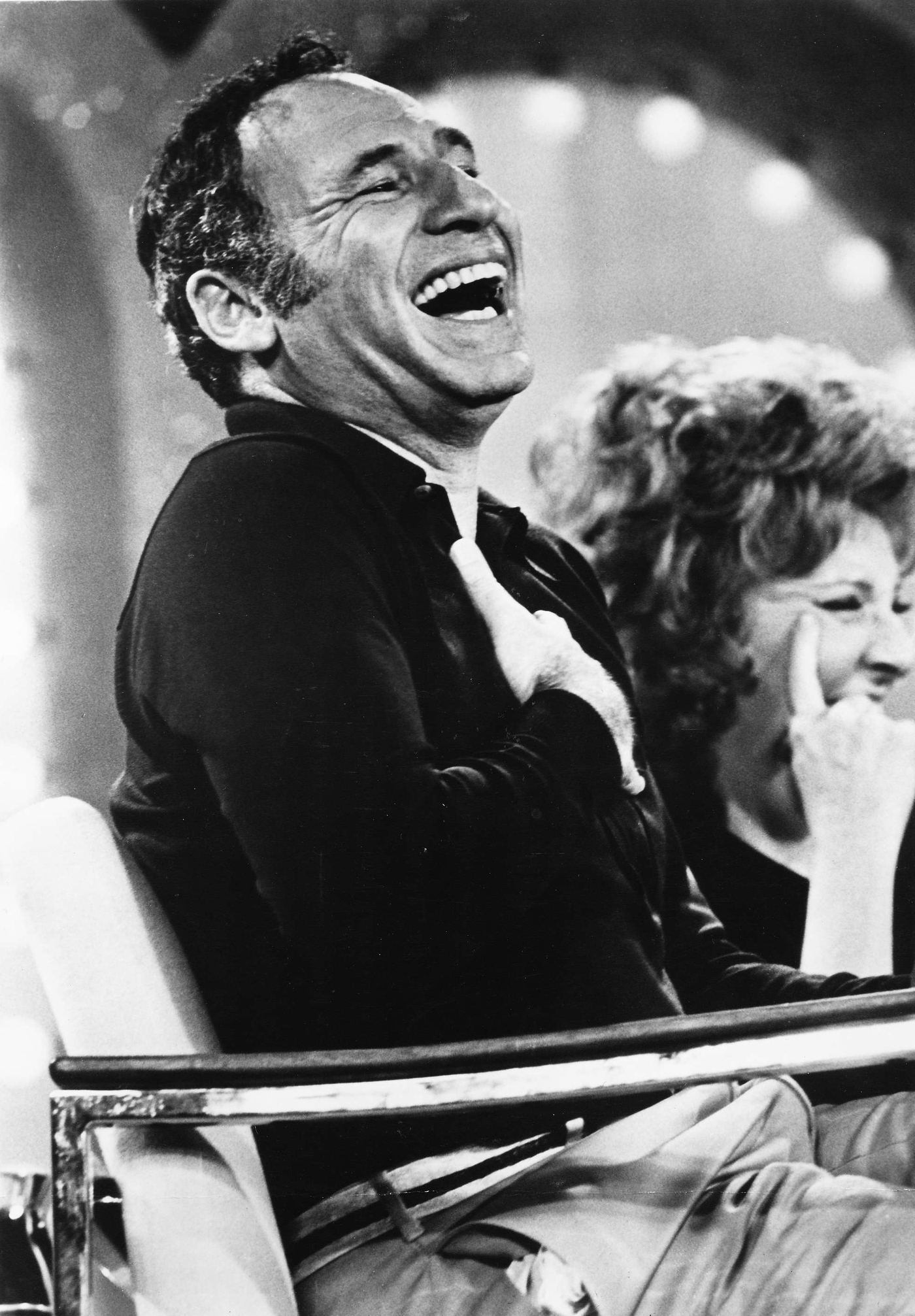 Comedian, writer, director, producer and actor Mel Brooks is one of only 11 people to have won Emmy, Grammy, Oscar and Tony awards. Others in the elite EGOT club include Mike Nichols and Whoopi Goldberg.

Over the 60 years that Mel Brooks has been in the entertainment business, his name has become synonymous with comedy. He is the man who broke Broadway records for most Tony Award wins with The Producers (an adaptation of his own movie); who satirized Westerns and racism in Blazing Saddles; and who poked fun at monster movies with Young Frankenstein.

Before the films, there was his TV career: Brooks was a writer for Your Show of Shows, one of the most influential comedy series in television history and a precursor to Saturday Night Live; and he was the co-creator of the spy spoof series Get Smart.

Brooks, who is the subject of a new American Masters documentary, Make a Noise from filmmaker Robert Trachtenberg, that premieres May 20 on PBS, says his penchant for spoofing genres was firmly in the tradition of poking fun out of love.

"I loved Westerns as a little kid, and I loved horror films," Brooks tells Fresh Air's David Bianculli. "I had fun with them, but I also saluted the glory of the Western and the glory of James Whale's Frankenstein and Dracula.

Brooks grew up in Brooklyn, raised by a single mother (his father died of tuberculosis when he was 2) who was just scraping by. Going to the movies was his introduction to a larger world, and his mother recognized this. Even though she couldn't afford it, she encouraged his enthusiasm, one time even asking a neighbor for the final penny to pay the price of a movie ticket. The neighbor acquiesced. 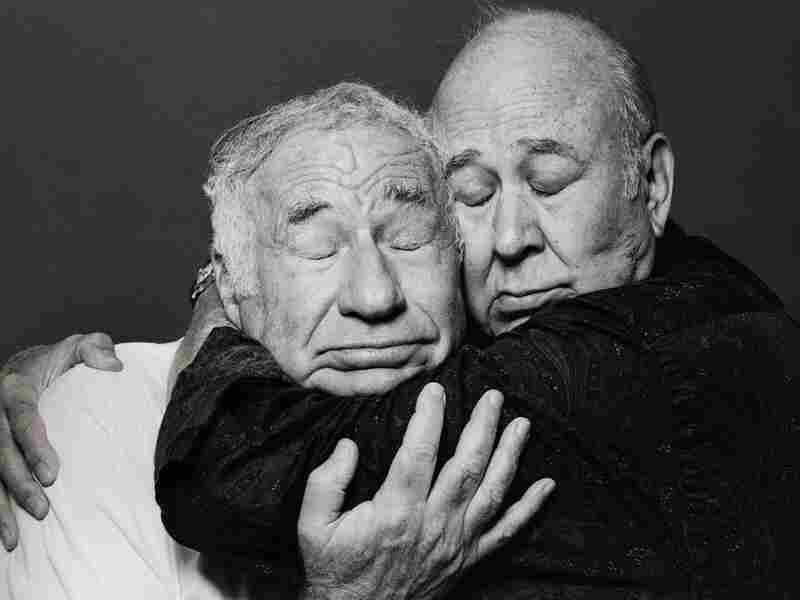 Carl Reiner and Brooks teamed up as a comedy duo in 1960, creating such now-legendary skits as "The 2,000-Year-Old Man." "Carl's still my best friend in the world," says Brooks. Robert Trachtenberg/WNET/American Masters hide caption 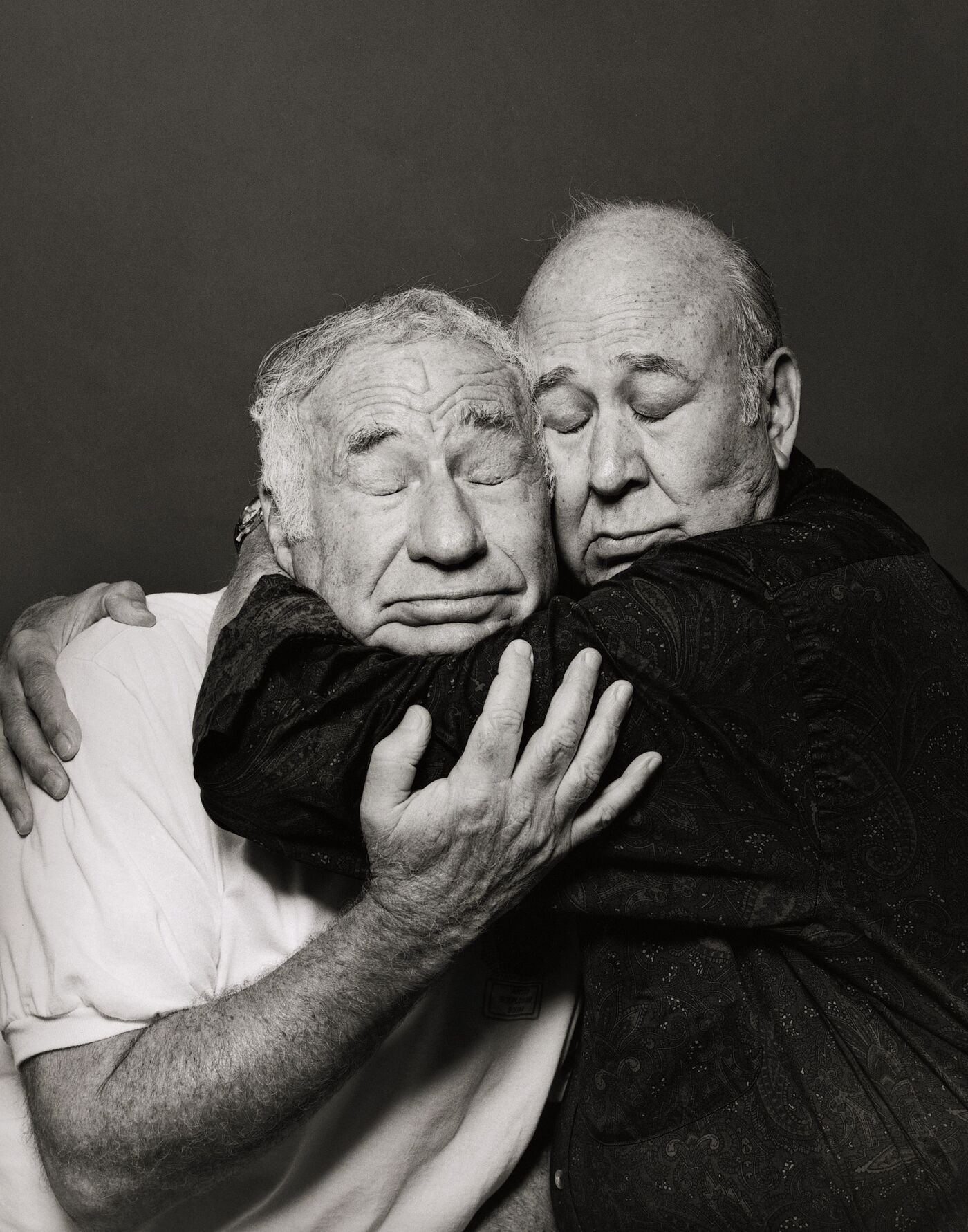 Carl Reiner and Brooks teamed up as a comedy duo in 1960, creating such now-legendary skits as "The 2,000-Year-Old Man." "Carl's still my best friend in the world," says Brooks.

"I was able to go see the Western," Brooks remembers. "So I cherish those movies because they really lifted my spirits and are indelibly ingrained in my brain as important steps in my world education."

That neighbor made an excellent investment. Brooks is one of 11 people to have won Emmy, Grammy, Oscar and Tony awards — widely considered something of a benchmark in the entertainment world. And his position as an American institution was further cemented in 2009, when he was tapped for the Kennedy Center Honors.

"I shouldn't say this ... but I'll say it anyway," he says. "I was offered this — the Kennedy Center Honors — maybe a year or two before, and I said, 'Well, I'm going to wait for another president, if I'm still alive, if you don't mind.' I just didn't feel comfortable when Bush was president to accept the honors. ... Had I not gotten 110 awards — you know, I'm an EGOT, so I don't need any more. ... The Kennedy Center Honors, at the moment, I didn't need them. ...

"The only award I haven't received, I think, is Woman of the Year, and I don't know if that's not in the works. Just as an honorary Woman of the Year. I may get that too, but I'm not looking for it." 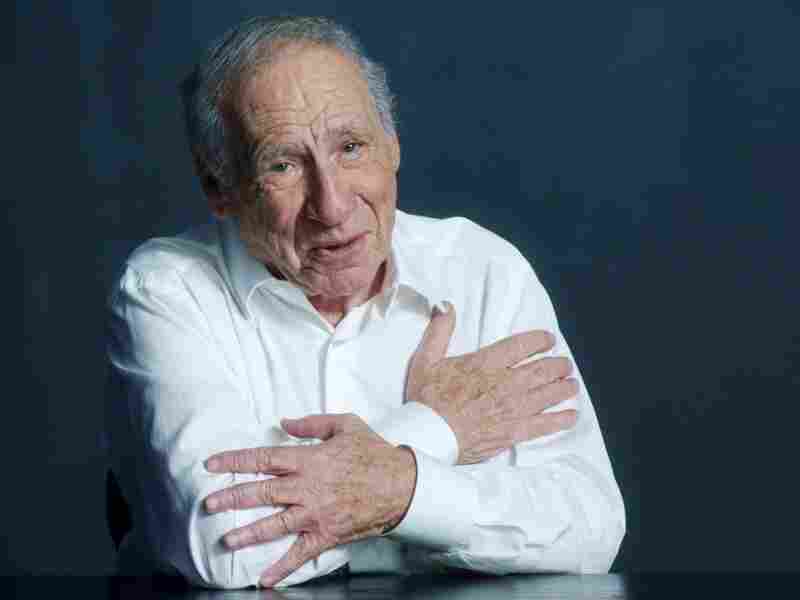 Once vehemently opposed to the idea of being the subject of a documentary, Brooks had a change of heart. The result is a new American Masters episode, Mel Brooks: Make a Noise. WNET/American Masters hide caption 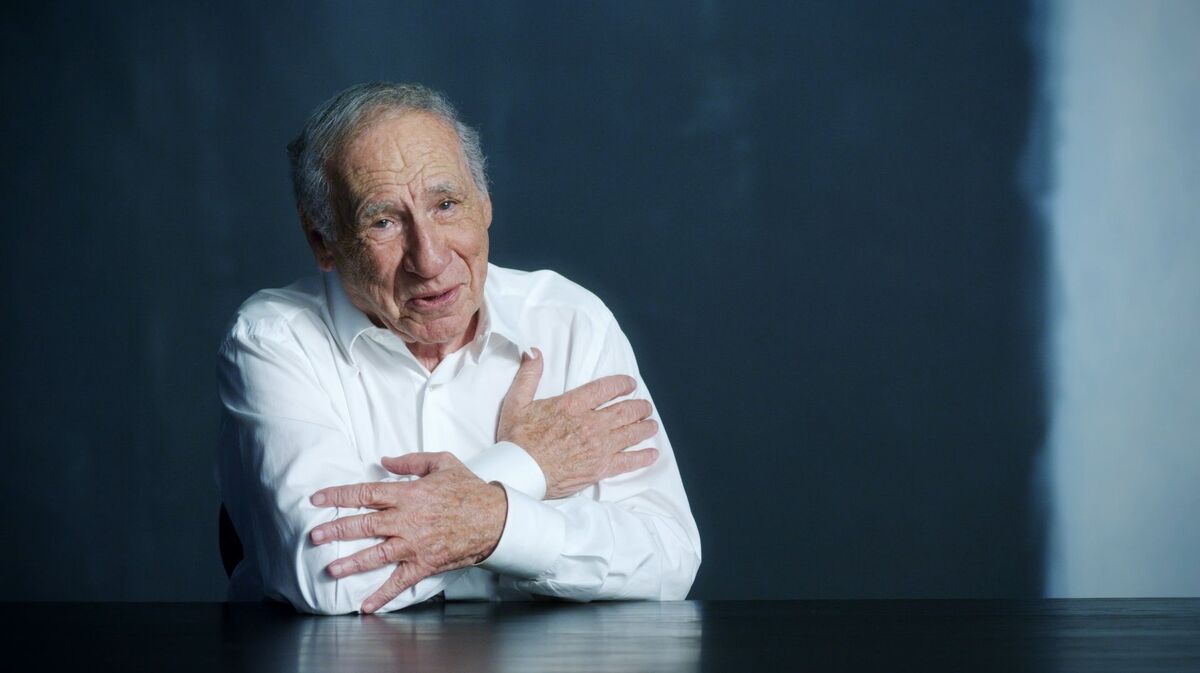 Once vehemently opposed to the idea of being the subject of a documentary, Brooks had a change of heart. The result is a new American Masters episode, Mel Brooks: Make a Noise.

On Hitchcock and 'High Anxiety'

"I wrote a letter saying, basically, 'Dear Mr. Hitchcock, I do genre parodies and in my estimation you are a genre. I don't mean that you're overweight. I mean that you've done every style and type of movie, and that you're just amazing, and I would like to do a movie dedicated to you based on your style and your work.' And ... he called me and he said, 'I loved Blazing Saddles. I think you're a very talented guy, and come to my office.'

She could have worked as a longshoreman in New Jersey. I don't think there's anything that Madeline Kahn couldn't do.

"Gene brought a certain something that was never before, that was kind of creative comedy. And he worked tirelessly to play Leo Bloom. He's really the nucleus, the brilliant key to the emotion of the whole piece — and Gene worked for almost scale, for nothing, day and night. And ... I couldn't thank him enough. When I finally put the movie together, I said, 'It would have been a good movie with just Zero Mostel and anybody, but with Gene Wilder it's a wondrous movie."

Boxes Of TV Fun, Old And New, For The Holidays

"I'm in tears thinking about Madeline. What an incredibly gifted gift from God, Madeline Kahn. The funniest and most talented comedienne I think, including people like Carol Burnett, who are great, you know, and Gilda Radner who was magnificent. But nobody — listen to me, David Bianculli — nobody could approach the magnificence and wonder of Madeline Kahn.

"She was really a great gift to us all. ... I saw art [in her], not just funny. But I saw a person who was gifted with art. She's the only one who actually could have worked in opera as an opera singer, as a coloratura. She was that talented. Or I think she could have worked as a longshoreman in New Jersey. I don't think there's anything that Madeline Kahn couldn't do."

On being good at writing for and directing women

"It was respecting their ability to deliver comedy as well as — and sometimes a lot better than — male comedians. And they knew that I respected their ability and their talent, and they gave all because of it. And they weren't ashamed or afraid to reveal maybe unconscious aspects of their comedy talent, [aspects that] may have been a little off-color or a little crazy or a little bizarre, that they wouldn't show anybody. But they'd show it to me, because they knew I respected the full range of their gifts."