Accessibility links
Advocates Struggle To Reach Growing Ranks Of Suburban Poor The number of poor people living in America's suburbs now surpasses those in cities or rural areas. Long focused on the urban poor, social service agencies are now trying to respond to the basic needs of a much more far-flung population. 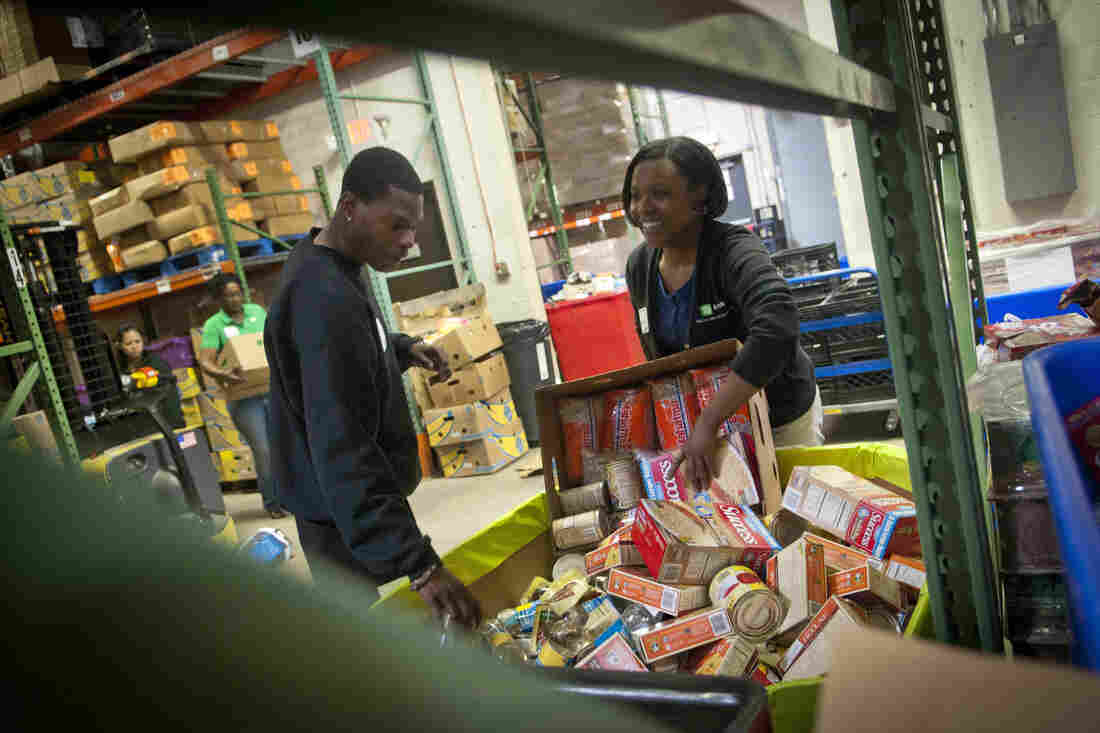 TD Bank volunteers sort donated food into barrels at the Manna Food Center in Gaithersburg in Montgomery County, Md. Poverty in the county just outside Washington, D.C., has grown by two-thirds since 2007. Gabriella Demczuk/NPR hide caption 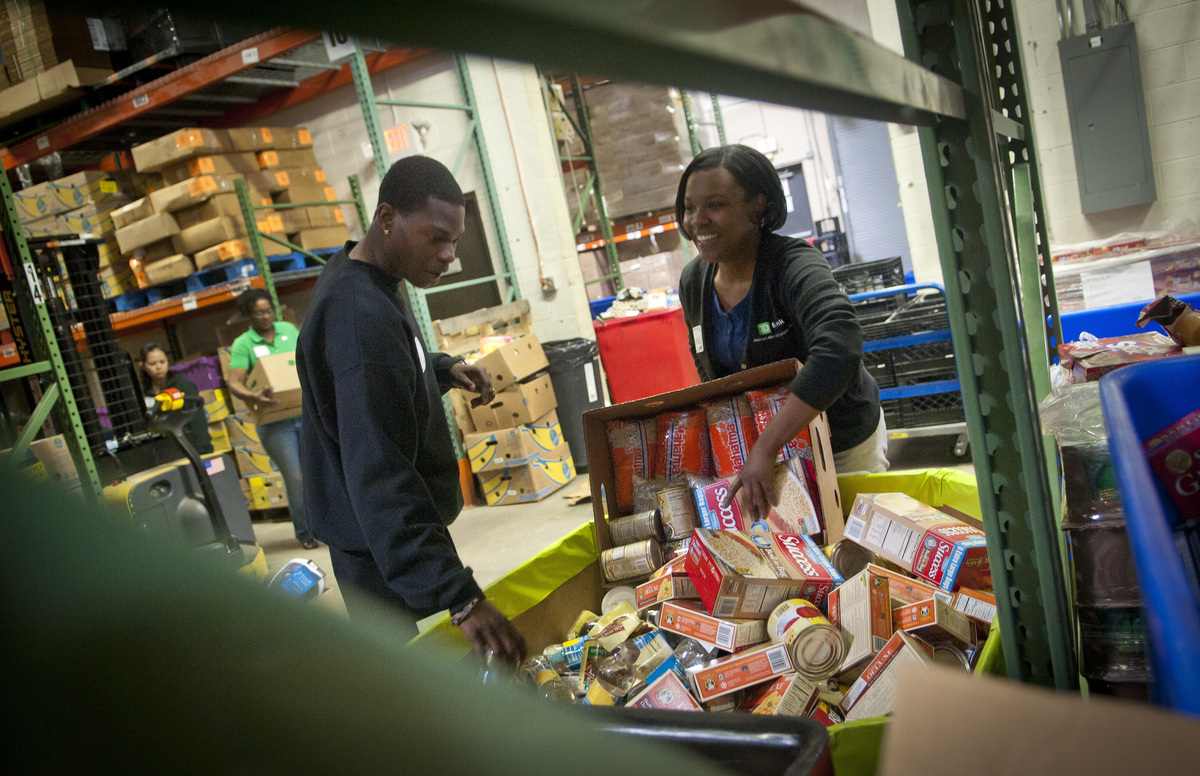 TD Bank volunteers sort donated food into barrels at the Manna Food Center in Gaithersburg in Montgomery County, Md. Poverty in the county just outside Washington, D.C., has grown by two-thirds since 2007.

Poverty has grown everywhere in the U.S. in recent years, but mostly in the suburbs. During the 2000s, it grew twice as fast in suburban areas as in cities, with more than 16 million poor people now living in the nation's suburbs — more than in urban or rural areas.

Elizabeth Kneebone, a fellow with the Metropolitan Policy Program at the Brookings Institution, says this shift in poverty can be seen in Montgomery County, Md., right outside the nation's capital.

"Montgomery County is one of the wealthiest counties in the country," she says, noting the streets lined with luxury apartments, big homes and crowded restaurants. "But it also has a rapidly growing poor population."

Kneebone, co-author with Alan Berube of a new book from Brookings, Confronting Suburban Poverty in America, says poverty in Montgomery County has grown by two-thirds since the recent recession. That means 30,000 more residents living below the federal poverty line — about $23,000 for a family of four.

That doesn't buy much in a suburban area with a high cost of living. By some estimates, a family of four in Montgomery County needs more than $80,000 a year to meet basic needs.

Suburban Poverty On The Rise Around the country, the suburban poor live in low-income and working-class neighborhoods, Kneebone says. "But it's also occurring in places we think of as more affluent," she says. "And, in fact, it may be even more hidden there because we don't expect to find poverty in those communities."

On a tour of Montgomery County, Kneebone stops at one place where the growth in poverty is not a surprise: Manna Food Center in Gaithersburg, where about two-dozen people are lined up for food.

One of them is Polly Maxwell, 64, who walks with the help of a cane. Maxwell says she started coming here a couple of years ago. After working for 38 years at a local hospital, mostly in medical records, she now lives on disability checks.

But Maxwell says things have gotten way too expensive. She spends half of her income — $800 a month — on the rent for her efficiency apartment.

"What you were making in two weeks when I was working, that's what I make a month," Maxwell says. "I mean, it's hard. And I just never thought it would be like that. So, you have to get used to that, you know. Some of your money lasts a month, sometimes it doesn't."

And she's hardly alone. This center, like food pantries across the country, has seen its caseload double since the recession.

Kneebone says Montgomery County is fairly typical. Suburban poverty has grown nationally because low-income families moved from cities — or other countries — in search of better schools, affordable housing and jobs. But she says it's also about people like Polly Maxwell — long-time suburbanites who have gotten poorer.

"The Great Recession was particularly severe — widespread job losses, many of them concentrated in suburban communities hit hard by the collapse of the housing market and the loss of construction jobs and related services," Kneebone says. And even though jobs are coming back to the suburbs, she says, many pay too little to make ends meet.

Kneebone says even social services and charities have been slow to recognize the shift in need. Most of their resources still go to the nation's cities, where there's a long history of serving the poor.

Shifting Focus Beyond The City

The nonprofit Mary's Center has been providing medical and other help to the poor for 25 years in the Washington, D.C., area. But until recently, all of its facilities were located in the city. That changed in 2008, when it opened a site in Montgomery County, in an area that serves many immigrants. It opened another suburban center last year.

"We were figuring out that when we were over there at the other sites that we have in D.C., there was a lot of population from Maryland who were traveling from here to there," says Zulma Aparicio, site director of the two suburban locations. "And they were paying fares for the bus, Metro and all of this. And now they continue paying, but it's closer."

Kneebone says transportation is a big issue for the suburban poor. Everything is so spread out, it can be hard to get where you need to go to meet basic needs, especially if you don't own a car.

But Montgomery County is trying to take steps to address the problem. The county's Neighborhood Opportunity Network operates three one-stop shops for struggling families. Pearline Tyson, the network's program manager, says the county opened the three centers in neighborhoods it knew had been especially hard-hit by the recession.

"They knew that some people would be intimidated by going to a [bigger] regional center to apply for benefits — especially people who had never received benefits before or who were not familiar with government services," Tyson says.

Instead, the neighborhood centers are intimate and accessible. One is located in Gaithersburg, in what looks like a typical suburban office park. But it's filled with nonprofits and social service agencies instead of businesses. People who come to the center are assigned a county worker who helps them navigate what can be a labyrinth of benefit programs and charitable services. 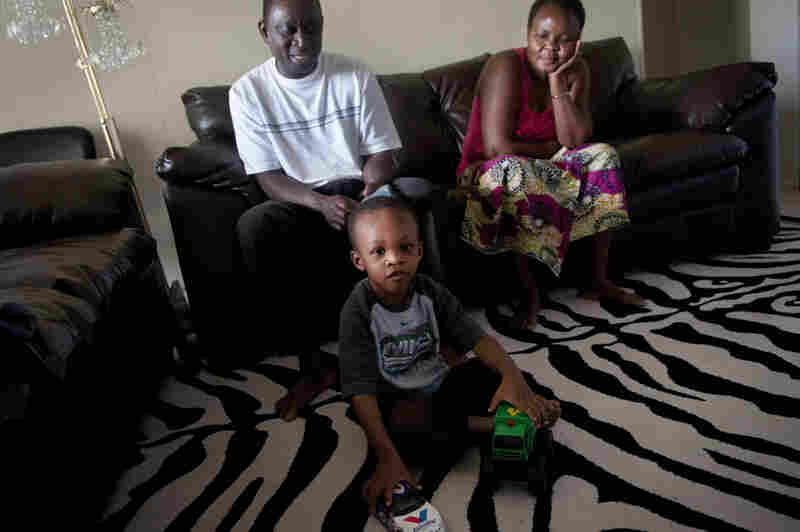 Fafaneva Phillip Avudufu (left) and his wife, Akouavi Davi, with their grandson Joshua, 4, in their apartment in Gaithersburg, Md. Gabriella Demczuk/NPR hide caption 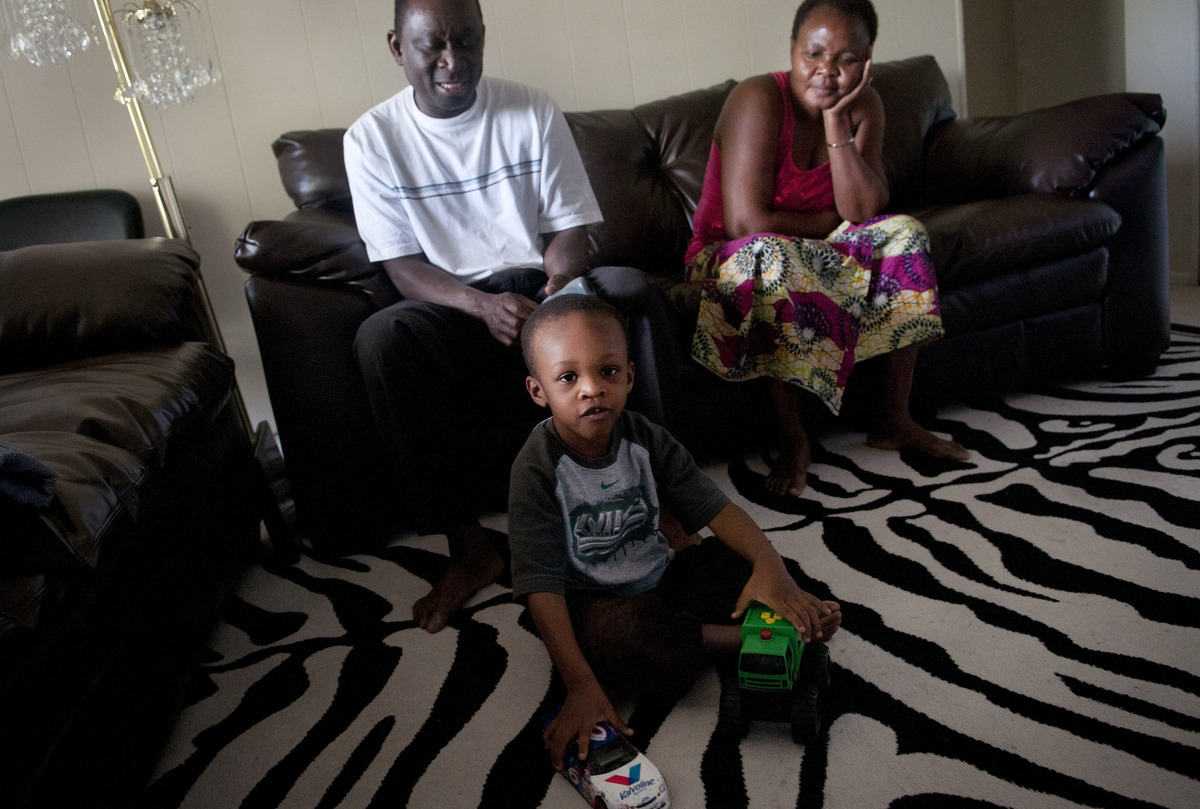 Fafaneva Phillip Avudufu (left) and his wife, Akouavi Davi, with their grandson Joshua, 4, in their apartment in Gaithersburg, Md.

For Akouavi Davi and her husband, who came here from West Africa, it's been a godsend. "I'm so happy, because I know I have someone to help me now," she says.

The family had been getting by on its own until a back injury forced Davi to give up her job at Wal-Mart. Then their daughter left their small grandson, Joshua, in their care, and now only her husband works, as a security guard.

"We have electricity problem. We have apartment problem. I have health problem, I don't have insurance," Davi says.

And to complicate matters, she doesn't drive. The family recently moved from a neighborhood further out in the county, where there are no buses, to a place near the center, where there are plenty.

Kneebone says when you're poor, geography matters. Low-income residents can spend long hours trying to get services — time that might be better spent working or going to school. She says at least this county is trying to adjust. Many have yet to do so.

"We're still thinking about poverty where it was in 1964 when President Johnson launched the War on Poverty. The reality on the ground today is just very different," Kneebone says.

And that reality, she says, is unlikely to change if people don't know it's there.