Accessibility links
Discovering A Family Member's Lost Time In Amsterdam When Margot Adler learned that a cousin had hidden from the Nazis in Amsterdam, she was stunned. Adler started digging around and discovered that like Anne Frank, 25,000 Dutch Jews hid, and two-thirds of them survived. Her cousin was one of them. 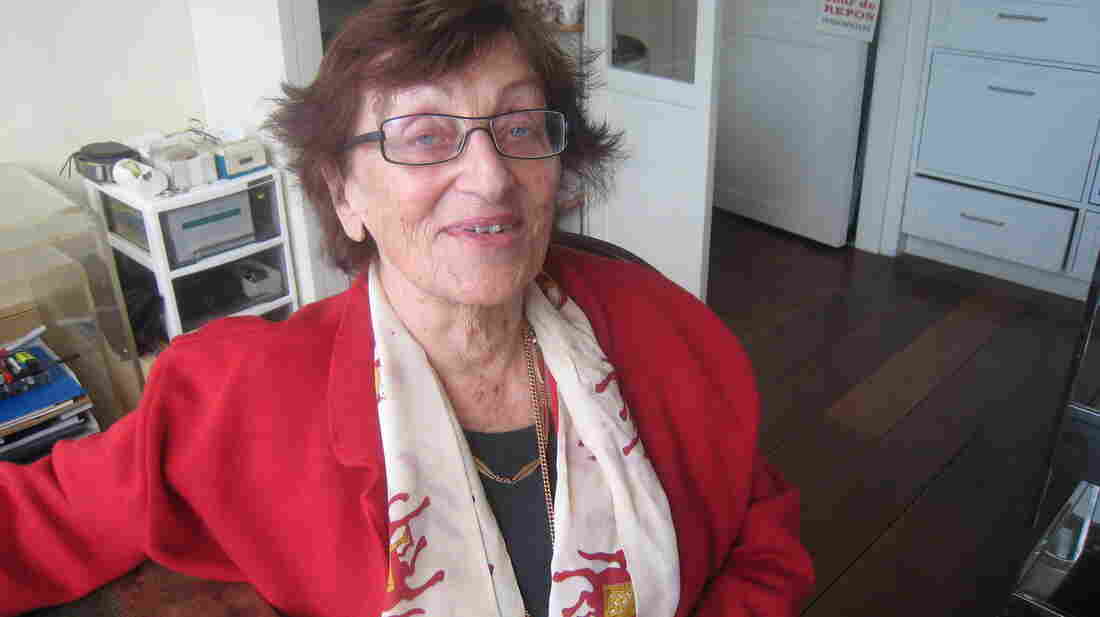 Suzanne Hoogendijk, shown here in 2009, hid for two years with her mother in Amsterdam to escape the Nazis. Margot Adler/NPR hide caption 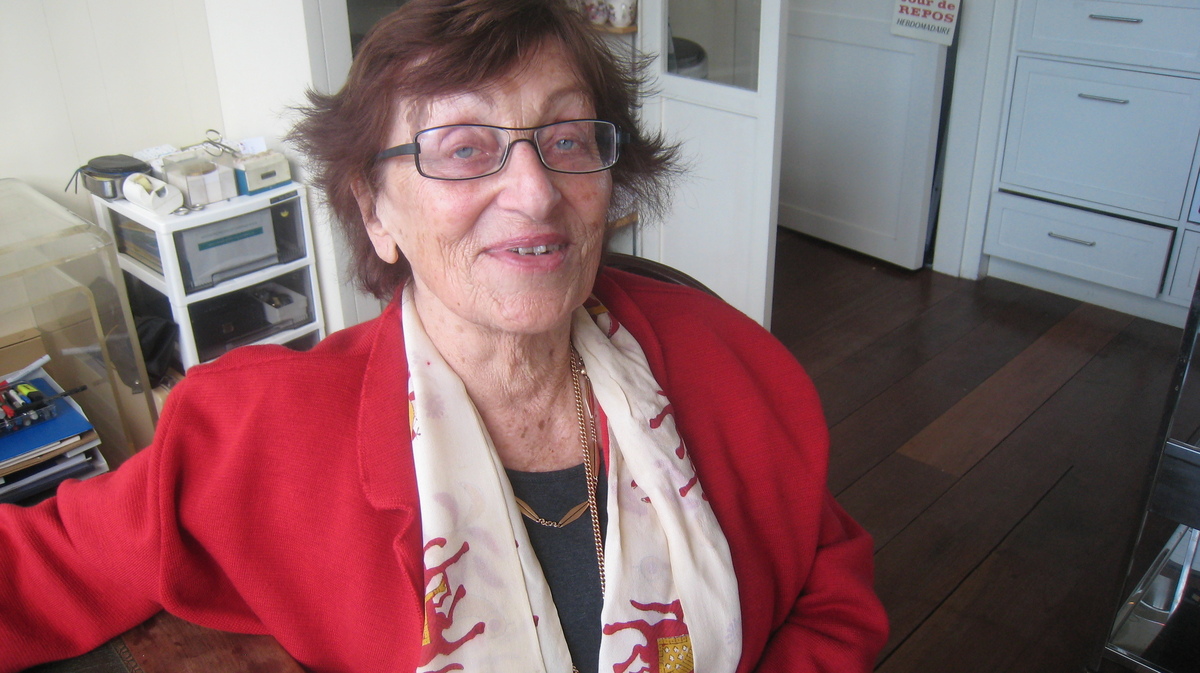 Suzanne Hoogendijk, shown here in 2009, hid for two years with her mother in Amsterdam to escape the Nazis.

When I found out that one of my cousins — now 88 — had hidden from the Nazis in Amsterdam, just like Anne Frank, it was a revelation. It made me want to know more about my cousin's life and story.

"I like to analyze what happens and to put it in writing; that gives you neatness in your head, and that is what I'm after," says my cousin, retired Judge Suzanne Hoogendijk. She was 87 at the time, and was talking about why she loved being a judge. But delving into her personal past was another matter.

About three years before that, I was sitting in a lovely house on the Brouwersgracht Canal in Amsterdam with Suzanne, her three children, their husbands and wives, and a whole bunch of grandchildren, 16 of us in all. We were about to eat take-out Chinese food, which people do in Holland just like they do here in the States.

Being visiting tourists, my husband, son and I had just come from Anne Frank's house. At the mention of that, this matriarch of the family said: "You know, they make such a big thing about Anne Frank, such a big thing; but you know hiding, it was boring."

I'm shocked into silence for a moment. I had no idea. It took me several years to return to Holland to sit down with my cousin, a recorder in hand. I start with that moment, years ago, right before the Chinese food arrived.

"I never talk about it because it is boring," she says. "You only feared that you were discovered, and it is not worthwhile to talk about it. Everybody writes about it; everybody knows [Anne] Frank, so why should I add to those stories?"

She doesn't want to discuss it. In the one page she has written about it, she describes it as nothingness:

I turned myself off. Your single prescription for survival was to make yourself invisible and mute.

She really doesn't want to say more. "You think, 'They took away five years of my life; I am not spending one minute more on that period.' That is why I don't want to talk about it. I have lost enough time on the Germans."

While her last name is Hoogendijk, her maiden name is Deutsch. She laughs and says, "I married only to lose that name!" I ask, "Because it means German? "Yes," she replies.

Gradually, I learn a few more things: She lived in three or four different places while underground, and she was 17 when she hid, a couple of years older than Anne Frank. She was 20 when she emerged. She lived for two years with her mother in a room that was 2-by-3 meters. She could never go out; her family's savings were spent on the black market for food; and her first boyfriend was executed. She has a photo of her class from the school she was forced to leave. "I am not in that picture," she says, "because I had to leave school like a Jewish child, which I didn't know that I was before." 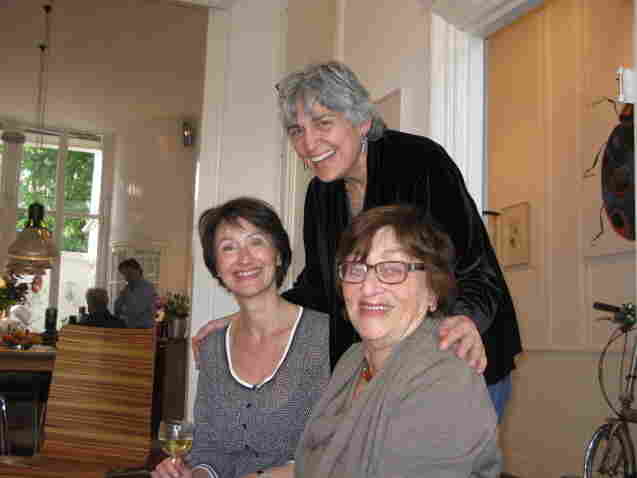 Suzanne Hoogendijk (from right) with Margot Adler and, Hoogendijk's daughter, Fleur, in 2012. Adler was surprised to learn that, like Anne Frank, her cousin had hidden from Nazis during WWII. Margot Adler/NPR hide caption 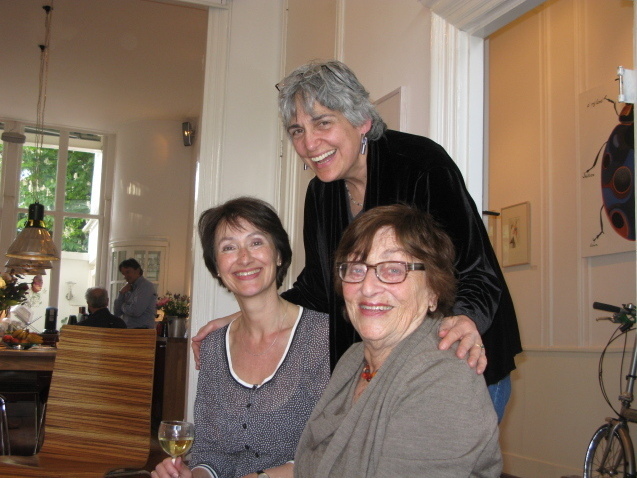 Suzanne Hoogendijk (from right) with Margot Adler and, Hoogendijk's daughter, Fleur, in 2012. Adler was surprised to learn that, like Anne Frank, her cousin had hidden from Nazis during WWII.

She didn't really know she was Jewish since she grew up totally assimilated in the Dutch world. That may seem surprising to some, but it's exactly how my father grew up in Austria, celebrating Christmas, in a world with no Jewish resonance. When the war ended and she tried to resume her normal life in Amsterdam, she says she had a strong desire to belong to a community. "It is in nature that you want to belong. And I went to the Jewish Student Association — I didn't feel at home at all; they all knew each other; they knew each other's families; they were rich."

But she still felt a connection to Jewish people. She eventually reconnected with her best friend from the gentile school she had attended, but only after that friend married a Jewish man. "I feel an affinity with Jewish people," she adds, "but I don't belong to the circle of Jews."

On the family's recommendation, I visit Amsterdam's Resistance Museum, which documents Holland's opposition to the Nazis. There I learn that 25,000 Dutch Jews hid like Anne Frank, and two-thirds of them survived. I learn that 105,000 Jews were deported by the Germans, and all but 5,000 of them died in the camps. So hiding gave you a better chance.

When Suzanne looks back, she says it astonishes her that she found her way in life. "I am amazed because I was innocent — I knew nothing," she says.

She had few people to talk to, no one her age with whom to compare stories. She had had no sexual experiences. After the war was over, "I had a feeling of urge," she says. "I went to bed with the first boy who was acceptable because I thought, 'I have to catch up.' "

I wondered if that attitude of putting it all behind her allowed her to become a successful law professor and judge, with three successful children. I wondered if she had always had a certain resilience. Her answer was matter of fact: "I think it's in your personality."

And yet as she looks at her granddaughter, now about the same age Suzanne was when she was underground, "I try to think how I was at her age. I am at a loss — I was not free to be myself. I missed all those years of growing up, of being an adolescent."

Once she emerged, she studied and excelled and made a good life for herself in Amsterdam. "But that is the surface," she told me. "I don't know what I would have become otherwise. I cannot understand why I didn't get more angry, and I have a suspicion that the anger is hidden somewhere, but I don't know where."

She says she will never be a pacifist, since she welcomed the Canadian liberators with their guns.

Now 88, Suzanne is beginning to write some of her own personal history. I asked her what she knows now that she didn't know growing up.

"That's easy," she says. "I know now that you have to accept for instance your partner — that he is both things, good and bad, and not only morally good and bad. That you can't have everything, and you have to adapt at what you can get; and when you are young, you cannot accept that."

Perhaps it's this attitude that has allowed Suzanne Hoogendijk to end up with a lot.