Accessibility links
Book Review: 'The Unwinding' By George Packer George Packer's The Unwinding explores the social and economic upheavals that have transformed the U.S. over the past 30 years. In a nuanced work of literary journalism, colorful characters from across the class divide tell their own stories of a social contract in tatters. 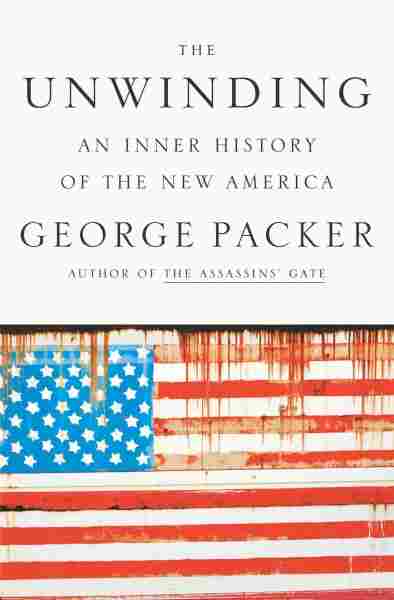 An Inner History of the New America

Halfway through The Unwinding, George Packer — author of the highly praised The Assassins' Gate: America in Iraq (2005) — delineates how quickly political idealism can disappear when one becomes exposed to a world of easy money.

Jeff Connaughton, who served as a legal adviser in the Clinton White House and then cashed in, making millions as a Washington lobbyist, candidly describes how the professional classes changed in the 1980s: "When the benefits exploded on Wall Street and Washington, when it became possible to make millions of dollars in corporate booty ... when norms began to erode and disappear that had held people back at least from being garish about the way they made money, the culture changed."

Connaughton is just one of many colorful characters Packer introduces us to in this book, which documents the drastic social, political and economic upheaval the United States has experienced over the past three decades. Reading almost as a collection of short stories, Packer's narrative — which owes a literary debt to both George Orwell's The Road to Wigan Pier and John Dos Passos' U.S.A. trilogy — follows the personal triumphs and failures of various individuals from across the United States. Others we meet along the way include Dean Price, the son of a tobacco farmer and an evangelist for a green economy in the rural South; Tammy Thomas, a Rust Belt factory worker trying to survive the financial collapse of Youngstown, Ohio; and Peter Thiel, a Silicon Valley billionaire who questions the true worth of the technology economy.

At first glance it seems as if Packer is simply documenting the change that took place as the social order of the Roosevelt republic gradually collapsed. But as this book progresses, it becomes apparent that a very pertinent question is being asked: What common bond do those who are ostensibly held together by an idea of American democracy actually share? It's a question the author doesn't definitively answer, but in his quest to find out, a few home truths are discovered.

Through his nuanced style of literary journalism, Packer portrays the complexities behind an argument most readers will be familiar with: The outsourcing of manufacturing jobs, the deregulation of the financial sector, and the shift to the right and the rise of free-market principles in both the Democratic and Republican parties has led the U.S. to its worst economic crisis since the Great Depression. Packer carves out his thesis by letting his characters tell their own stories. The argument, in short, might read something like this: Over the past 30 years, American democratic values have been undermined by the powerful lure of unregulated capitalism. George Packer is a staff writer for The New Yorker and the author of numerous books of nonfiction. Guillermo Riveros/Farrar, Straus and Giroux hide caption

For a journalist, this method of subtly pushing your polemic through other people's opinions can be a liberating experience. We meet, for example, Matt Weidner, a real estate lawyer fighting foreclosures in Tampa after the property crash of 2007, who opines that the economy is in the doldrums because "our parents were fat and lazy. ... Our grandparents would have never mortgaged everything and lived off credit." Weidner then asks one of his hard-pressed clients, Jack Hamersma, why all of the unemployed homeowners in foreclosure across the country don't come together and form a movement. Jack replies, "Imagine getting up every day and not having a purpose. You're not working; your self-worth goes down the toilet."

This degrading poverty is then poignantly contrasted with tales of colossal wealth, as the gap between the rich and the poor continues to rise. A friend of lobbyist Connaughton, whom he meets on the Joe Biden presidential campaign, arrogantly declares, "This would sound strange to 99 percent of Americans, but $400,000 a year doesn't go as far as it used to." For Peter Thiel, who amassed a fortune of $1.5 billion from his investments in Facebook and PayPal, a seminal moment for American capitalism arrived in 1997, with the publication of a Silicon Valley novel called The First $20 Million Is Always the Hardest. Thiel recalls how in the 1980s, a person was considered wealthy in the U.S. if he or she was a millionaire. In the culture of Silicon Valley now, getting rich means amassing billions.

Packer's strength as a storyteller lies in his ability to marshal a diverse range of voices from across the class divide, in a nation deeply divided by social status. But the scattered nature of the narrative — which starts in 1978 and ends in 2012 — means it inevitably lacks a sense of continuity and feels slightly long-winded for what it has to say. Moreover, the very brief biographical sketches Packer drops in every few chapters — of famous artists, celebrities and politicians, from Raymond Carver to Oprah Winfrey, Colin Powell and Newt Gingrich — ironically steers the book in a direction it otherwise tries to avoid, since Packer is clearly passing judgment on elements of American culture that have evolved since the late 1970s. When he tells us how gangster rap is eroding America's principles, his tone becomes slightly elitist.

Packer believes the seismic shift in political and economic life, which has left the social contract in tatters, will inevitably mean that members of an increasingly isolated American society will find themselves alone, having to "improvise their own destinies, plot their own stories of success and salvation." Despite The Unwinding's minor flaws, the book is a fitting reminder of the paradox of democracy in America, where ideas that are seemingly sacrosanct can be eroded and replaced within a generation.

J.P. O'Malley is a freelance journalist based in London. His work has appeared in The Spectator, The Economist, The Daily Beast, New African, The Sunday Times and many others.

Read an excerpt of The Unwinding