Accessibility links
Movie Review - 'Fast & Furious 6' - Silly, Speedy And Certain To Cash In Fast & Furious 6 pits Dominic's crew against a wily terrorist in a high-tech battle royale — but it has a devil of a time explaining why everyone should hop into their cars. 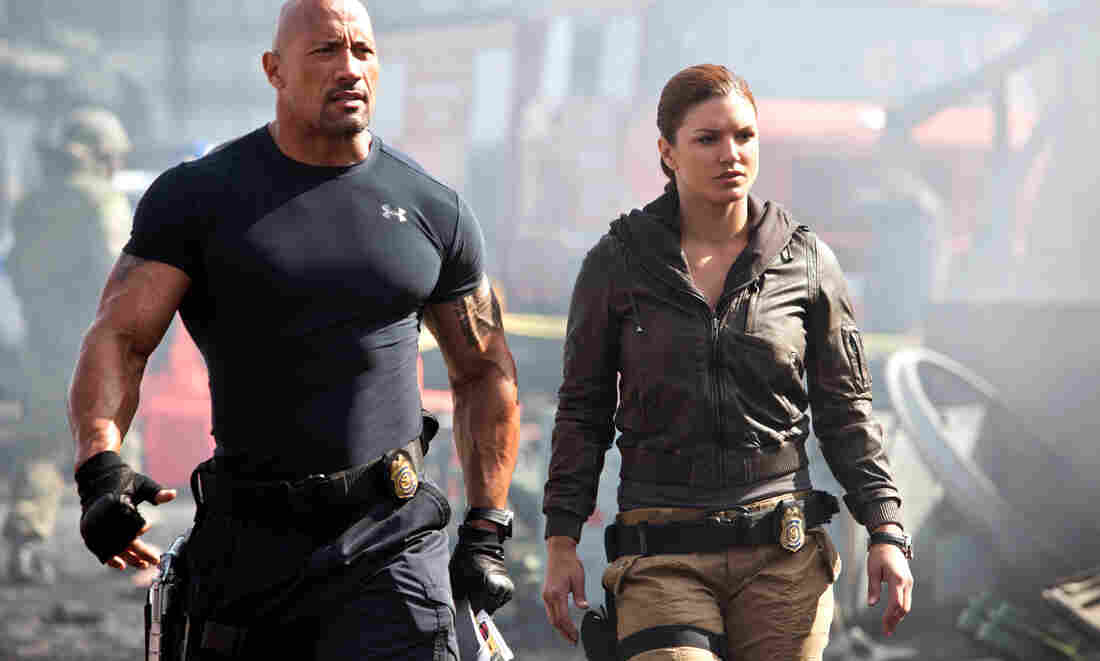 Rated PG-13 for intense sequences of violence and action and mayhem throughout, some sexuality and language

'I Need Your Team'

'Take Your Crew And Walk Away'

For gearhead purists, the Fast and the Furious franchise is an ongoing heresy, the sins adding up with each new sequel. The appeal of the genre has always been its simplicity: Greasers racing for pink slips, their muscle cars grinding and screeching and speeding into the horizon.

The Fast and the Furious has moved the genre into the digital era, replacing the force of metal against metal with the unreal bobbing and weaving of an arcade game. And now at five sequels and counting, it's become freighted with the mythology of a George R.R. Martin series, with characters and incidents cobbled together like so many spare parts under a giant chassis.

The 2011 entry, Fast Five, intelligently accommodated the bloat by bringing the gang together for an Ocean's Eleven-style heist in Rio. The streamlined plot had the effect of channeling the series' excesses into a handful of giddily over-the-top action set pieces. The CGI ballet of flying sports cars and twisted wreckage may insult the physics of gear head classics — to say nothing of the laws of Isaac Newton — but no one could say director Justin Lin doesn't go full throttle.

Now, with the series' lovable rogues dispersed to various tropical locales, each living high off their share of $100 million in ill-gotten money, Fast & Furious 6 has to find a new reason to bring them all together — and it's not nearly so graceful with the heavy lifting.

Porting over a plot from some generic spy thriller, Furious 6 opens with Dwayne Johnson's DDS agent from Fast Five coaxing Dominic (Vin Diesel), Brian (Paul Walker) and the rest of their crew (Tyrese Gibson, Chris Bridges, Sung Kang and Gal Gadot, among others) out of early retirement to stop a powerful mercenary with terrorist designs.

Former British Special Forces operative Owen Shaw (Luke Evans), now an underground operator with deep connections, seeks a computer chip that could lead to mass destruction in the wrong hands. The authorities, naturally, are too weak and/or corrupt to bring him to justice.

Dominic and Brian have no interest in risking their necks for Johnny Law, but when it's revealed that Dominic's deceased former girlfriend Letty (Michelle Rodriguez) is actually alive and running with Shaw's gang, they're eager to rescue her and bring her back into the family. (Fans will recall that Letty died in Fast & Furious, the fourth of the series, and the groundwork for her return was laid at the end of the last entry; death has about as much finality in Fast as it does in a daytime soap.)

He Believes He Can Fly: This might seem a little spoilerish, but come on now — how awesome is this shot? Universal Pictures hide caption

He Believes He Can Fly: This might seem a little spoilerish, but come on now — how awesome is this shot?

Fast 6 pits Shaw's crew against Dominic's in a high-tech battle royale, but it has a devil of a time explaining why everyone should hop into their cars. The obligatory underground racing sequence here — in a London that looks no different from the scenes in Miami or Rio — is such an afterthought that the big race has no finish line and no winner. Lin peppers the film with action beats, including a good piece of hand-to-hand combat in a subway station, but the fact is that the surveillance work necessary to track down Shaw is more practically accomplished on foot.

That leaves Fast & Furious 6 to invest the lion's share of its resources in a highway duel that's as cheerfully ridiculous as any sequence in the series. (One word: tank!) For a 15-minute stretch, Lin and his effects team cut loose with high-speed jousting, massive explosions and countless feats of derring-do no actual human could survive.

It's glorious while it lasts, but then the film goes back to figuring out how to keep its oversized vessel from taking on water. And that's more hard work than it's worth.