Accessibility links
'Lunch Lady' Author Helps Students Draw Their Own Heroes Can you imagine your own superhero? That's the question author and illustrator Jarrett Krosoczka posed to kids on a recent afternoon at a school in Washington, D.C. Krosoczka also described how he overcame a difficult childhood to become the author of the beloved Lunch Lady series. 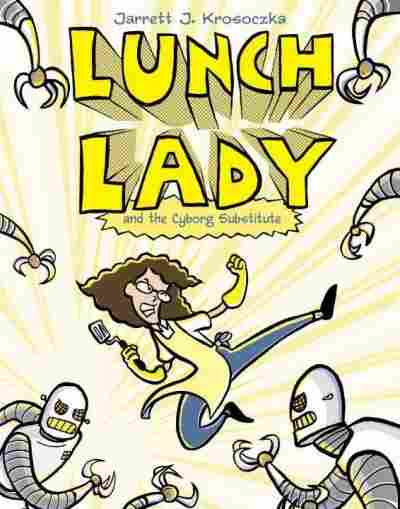 Lunch Lady and the Cyborg Substitute

The Lunch Lady is actually a secret superhero with all kinds of special cooking gadgets — fish stick nunchucks, a hairnet that catches the bad guys and a spatula that spins into a helicopter. She doesn't just serve food — she serves justice. It's a silly premise, but take the time to read these books and you'll see that The Lunch Lady is a subversive superhero. Her special power: attracting reluctant young readers.

'You Guys Are All Authors, Too'

Krosoczka loves visiting classrooms; as he explains in the video above, an author's visit to one of his childhood classes was a formative moment for him as a young artist. On a recent spring day, he joins NPR's Michele Norris at the Walker-Jones Education Campus in Washington, D.C., where he has a message for the eager audience of kids: Everyone's an author.

"When I look back at my career as an author, I don't look at the first book that was ever published as to where my career began — I look to the first book that I ever wrote," Krosoczka tells the students. He wrote that book when he was in just the third grade. "You see, an author is somebody who writes a story. It doesn't matter if you're a kid or if you're a grown-up, it doesn't matter if the book gets published and lots of people get to read it, or if you make just one copy and you share that book with one friend."

He asks the students how many of them had written their own books. As the hands go up, he tells them, "I hope you all realize that you guys are all authors, too."

The kids are curious about Krosoczka's inspiration. Third-grader Damian Williams wants to know who his favorite superhero was.

"When I was a kid ... if I couldn't get a ride to the comic book store I would walk a mile and a half each way to get the latest issues of Batman and Spider-Man and X-Men," Krosoczka answers. "I could not choose one over the other."

Krosoczka asks Williams who his favorite superhero is. Without missing a beat, Williams answers: "Lunch Lady."

Draw Your Own Superhero

Krosoczka asked students to imagine their own superheroes. Here's a sampling of what they drew.

The kids at Walker-Jones learn in the shadow of the nation's Capitol; you can see the majestic dome blocks away through their window. Yet the students live in some of the city's roughest neighborhoods. They have done their homework on Krosoczka, and learned that his childhood wasn't the stuff of fairy tales, either. They are curious to know more.

"When I was a kid, it was tough for me," Krosoczka explains. "I lived with my mom for the first two years of my life, so suddenly she just wasn't there any more, and I didn't know why. And I never knew my father when I was really young. ... I was raised by my grandparents ... and it wasn't until I was a little bit older, maybe fifth or sixth grade, when my grandfather sat me down and he said, 'It's time that you know [the] truth about your mother,' and that she's been in jail, she's been in halfway homes, and that she's an addict. And that was a really tough pill to swallow. I was not expecting that."

Even while Krosoczka's mother was incarcerated, she helped to inspire him. "My mother was a very talented artist," he tells the students. "When she was in jail, we'd write letters back and forth; that was pretty much the only form of communication we had. And she would draw me a picture of Snoopy ... and she'd request a cartoon character back. So I would draw her Garfield. And then I would request, say, The Pink Panther. ... We would send letters back and forth, and we would draw each other cartoons."

It was only as he grew up that Krosoczka realized what a gift his mother had: "As I got older, I thought, 'Wow, she's so talented.' And I said, 'I am gonna make something really big happen with the same skills that was handed down to me from her, and to her from my grandfather Joe.' "

A Blast From The Past

Krosoczka's grandparents gave him stability, art classes and unconditional love, and along the way he had teachers who nurtured his talent. Yet every so often his past catches up with him — and he says that's OK. Krosoczka recently celebrated 10 years as a published author and illustrator with an event at the Worcester Art Museum. That's the museum where his grandparents had sent him to take classes as a kid, and in their honor, Krosoczka had set up a scholarship to help other kids take classes there, too.

A woman and her children came through the line to meet Krosoczka. "She was very excited to see me, and I signed her books; there was a nice little moment. And then she walked about 10 feet away to chat with her friends," Krosockza recalls. "But she didn't realize that she was standing next to my wife, Gina."

'The One And Only Ivan' By Katherine Applegate

Krosoczka's wife overheard the woman say to her friends: "You know, the last time I saw him I was his mother's parole officer, and I went by their house to check on them. And he was a baby crying in his crib by himself, with no one to care for him. But now he's here, signing books and celebrating 10 years as a published author."

Read an excerpt of Lunch Lady #1