Accessibility links
Living In Two Worlds, But With Just One Language Elysha O'Brien calls herself a "Mexican white girl." Not just because of her ethnically ambiguous appearance, she says, but also because she can't speak Spanish. Fearing their children would experience discrimination if they spoke Spanish, her parents chose not to teach them their native tongue. 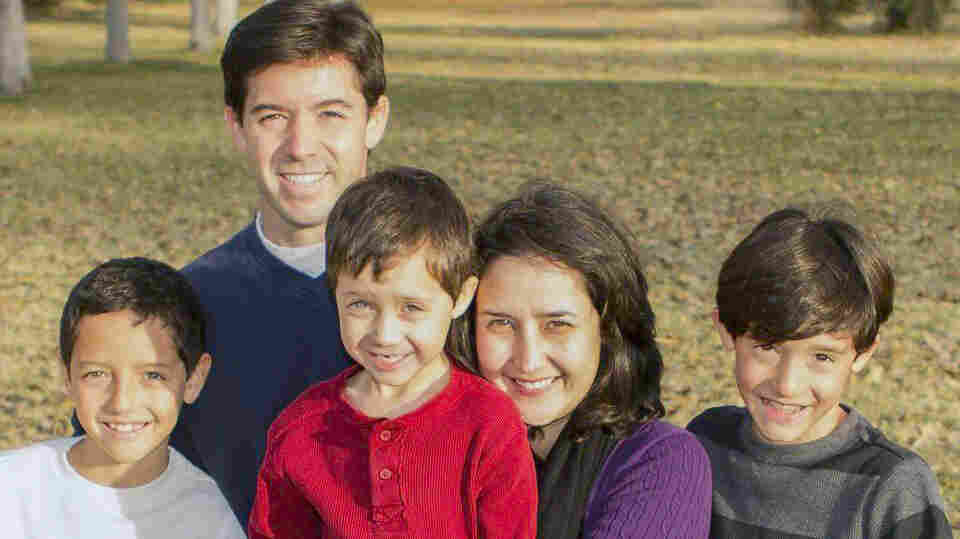 Elysha O'Brien and her husband, Michael, with their sons. Elysha never learned Spanish but is determined that her children will. Courtesy of the O'Brien family hide caption 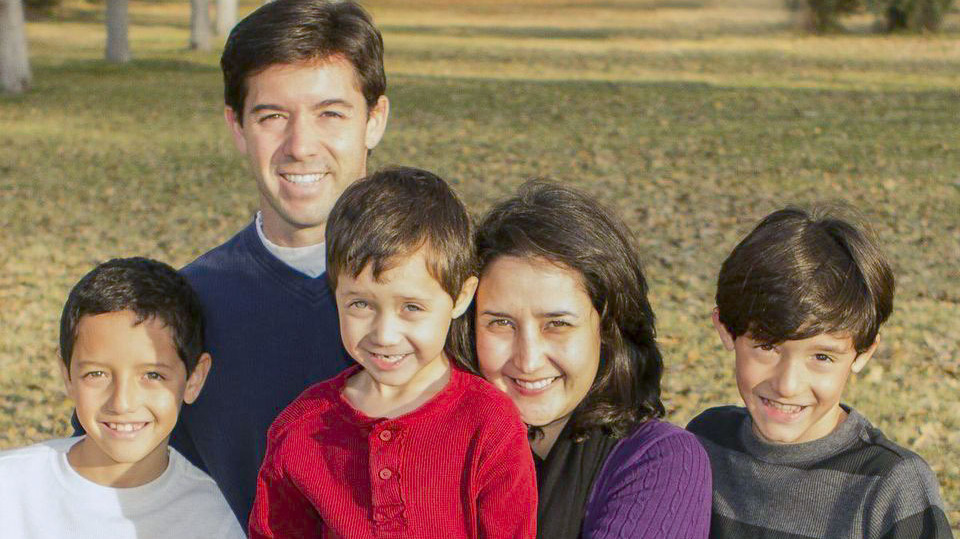 Elysha O'Brien and her husband, Michael, with their sons. Elysha never learned Spanish but is determined that her children will.

Courtesy of the O'Brien family

NPR continues its conversations about The Race Card Project, where NPR Host/Special Correspondent Michele Norris asks people to send in six-word stories about race and culture. The submissions are personal, provocative and often quite candid.

When Elysha O'Brien, a college professor in Las Vegas, decided to submit six words about her cultural identity, she knew exactly what she wanted to say: "Mexican white girl doesn't speak Spanish." Like many others who have written to The Race Card Project, she grew up in bilingual household but never learned the language of her elders.

O'Brien says she often feels like she has a foot in two worlds, but is never fully accepted in either. Whites often assume she is Greek or Mediterranean because her face is slightly angular and her skin fairly pale. But when she encounters others who share her Mexican heritage, they often don't pick up signals that suggest cultural camaraderie.

"When I go into a community of Hispanics, they just assume that I'm white," O'Brien says. "Once we start talking, sometimes they'll say, 'Well, why don't you speak Spanish?' And I say, 'Well, my parents didn't teach me.' "

O'Brien was raised in a household where both parents spoke Spanish — but not to their children. The couple made a collective decision to ensure the next generation mastered English without the hint of an accent. Spanish was the secret language they used when they argued or talked about Christmas presents.

Many people have who never learned the language of their elders have written to The Race Card Project. Follow the links to find out the stories behind each of these six-word essays.

I am Latina no habla Espanol — Erica Renee Contreras, Houston

Expectation that I must be bilingual — Helen Rodrigues, Berkeley, Calif.

I can't speak my own language — Dominic Lim, Oakland, Calif.

O'Brien's father is one of eight children, and among her 25 cousins, all but three speak English only. When she asked her parents, aunts and uncles why they didn't pass on their native language, they all gave the same reason: They faced bias, or worse, when speaking Spanish outside the home. They were rapped on the knuckles at school or denied jobs and other opportunities.

O'Brien absorbed that message, she says. At one point in her teen years, she would de-emphasize her heritage when other Mexican-American kids would tease her for not speaking Spanish, she says. "It was my parents' language; it wasn't my language. When you're kind of rebellious and you're trying to find your identity, I used to say, 'Well, I'm not Mexican, my parents are.' "

As an adult, even saying those words out loud is difficult for O'Brien. "I think it sounds very flip. It sounds very much like I'm trying to make amends for a really deep wound — just trying to put a Band-Aid on something instead of digging out the infection that's there," she says.

O'Brien, who has a doctoral degree, now says she emphasizes her Latino heritage out of pride. But she also hopes her career path and education might serve as a beacon for others. For years, she never asked her students to address her as "Dr. O'Brien"; "professor" or even her first name would do.

But that changed when she met a Latina student who gushed about meeting a Mexican-American Ph.D. for the first time. Now, she says, "I do make a point to tell people, 'Hey, I'm Mexican and I'm a female and I have a Ph.D. There are not very many of us who have all of those three things."

O'Brien and her husband, an educator of Irish and Italian descent, have three boys — a blend of cultures not easily captured on official forms. Recently, O'Brien says, she had to fill out a form for her children that required checking a box for ethnicity. "And there was a box for "white," there was a box for "black," a box for "Asian" and a box for "Hispanic." 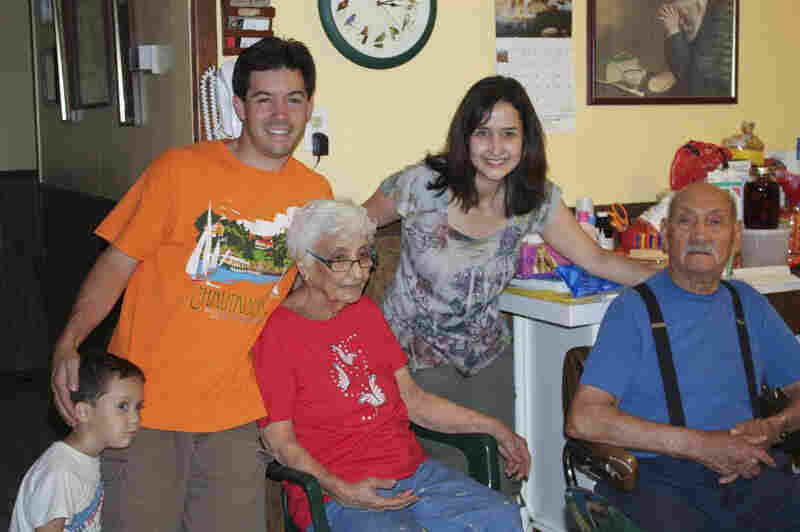 Elysha, husband Michael and one of their sons with Elysha's grandparents, Evelia and Homer Patino. Courtesy of O'Brien family hide caption 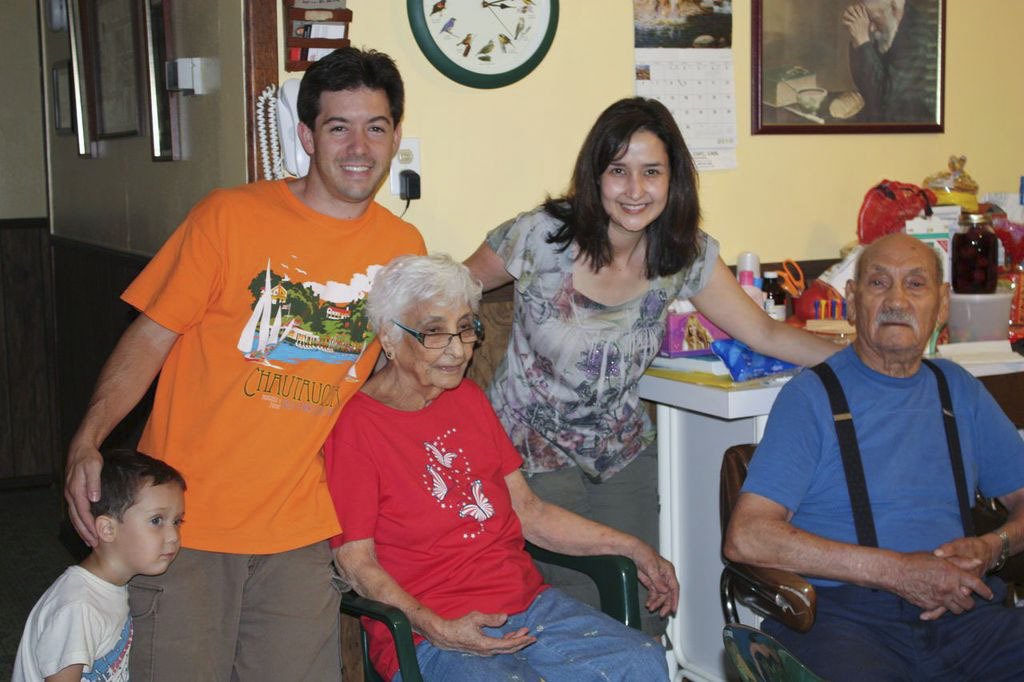 Elysha, husband Michael and one of their sons with Elysha's grandparents, Evelia and Homer Patino.

O'Brien is determined that her sons will speak both English and Spanish. She hopes that will deepen their relationship with their Mexican-American grandparents. The elders on her family's side, she says, display a more gregarious part of their personality when speaking in their native tongue. As an academic, she says she also wants her boys to have the "brain plasticity" that learning another language allows.

And, while her parents experienced bias when speaking Spanish in public decades ago, O'Brien says she would have greater opportunities if she had dual language skills today — and wants her sons to have that advantage.

She acknowledges that her sons will ultimately decide how to identify themselves as adults, but she wants to make sure they emphasize their Hispanic roots when seeking opportunities, like applying to college.

"My children have the O'Brien last name and they're all fair-skinned and they appear white," O'Brien says. But when filling out school forms, "I always make sure I check off that 'Hispanic' box. Because I know that as a white male, they're not going to be given certain privileges as if they were a Mexican male, which perhaps is slightly racist on my own part, but I want them to be able to have access to things." 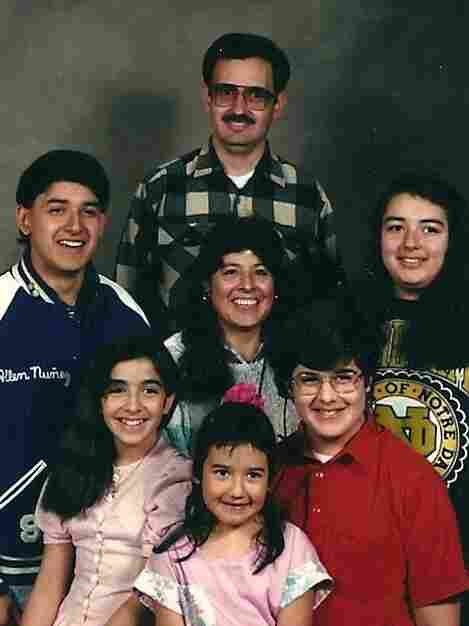 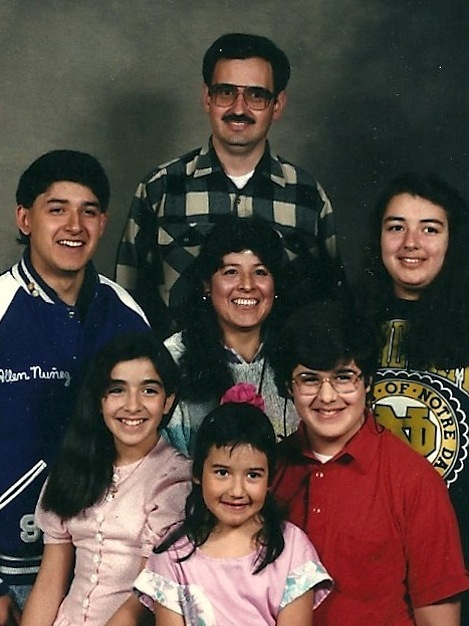 Allen Nunez Wickham (far left) with his family in the early 1990s. His grandmother chose not to teach his father Spanish, and Nunez Wickham also never learned.

Allen Nunez Wickham lives In Molalla, Ore., just outside of Portland. He sent his six words to The Race Card Project knowing his father would play a prominent role in his submission, "Grandma didn't let Dad speak Spanish." Both of his parents came to the U.S. from Mexico as children.

Because he doesn't speak with a noticeable accent, he "passes" or blends in better with other ethnic groups. Consequently, Nunez Wickham says, he's heard charges that "he's not really Mexican" because he doesn't speak Spanish. "After a while," he says, "I just started calling myself Chicano because it was like more of an American-Mexican."

But his family displays "Nunez," his mother's maiden name, with pride. "I use it deliberately," he says.

He spoke with NPR's Michele Norris about the pros and cons of being closer to his family's cultural heritage.

The audio of this story, as did a previous Web version, incorrectly says that Elysha O'Brien's parents are from Mexico. In fact both parents were born in the U.S.