Accessibility links
Losers In Chicago School Closings Target Elected Officials The Chicago school board voted to close dozens of schools, despite community protests that the closings disproportionately affect minority students. Now the teachers union and community activists want to change the system and oust the elected officials who disagreed with them. 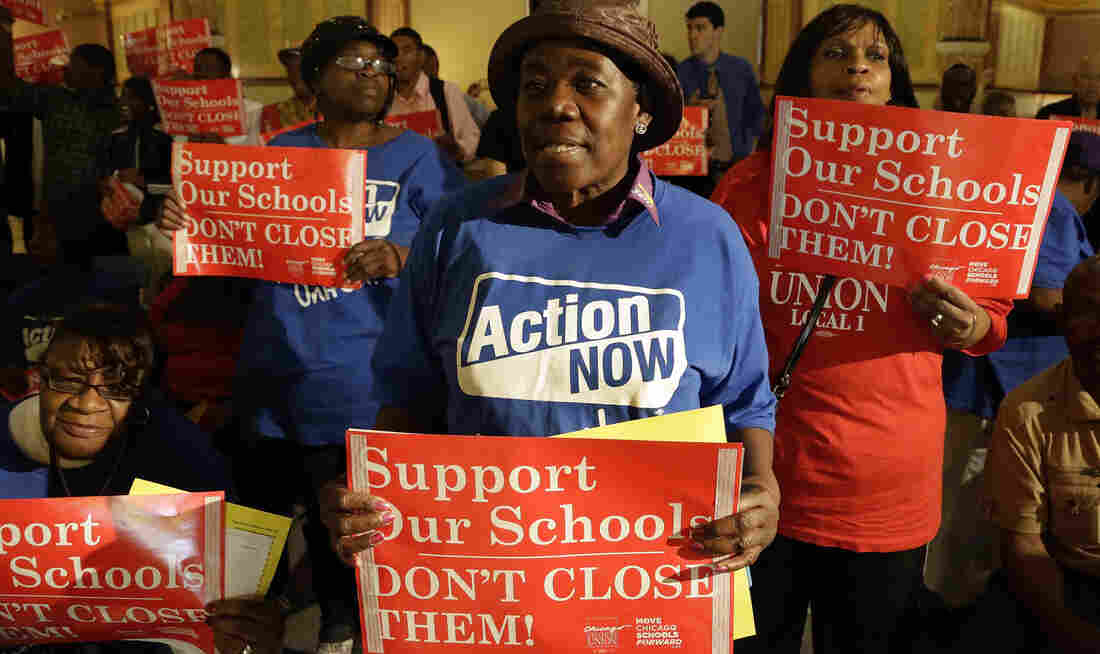 Protesters of Chicago Mayor Rahm Emmanuel's plan to close dozens of city schools rally in the Capitol rotunda in Springfield, Ill., on Wednesday. The Chicago Board of Education voted to close 50 schools. Seth Perlman/AP hide caption 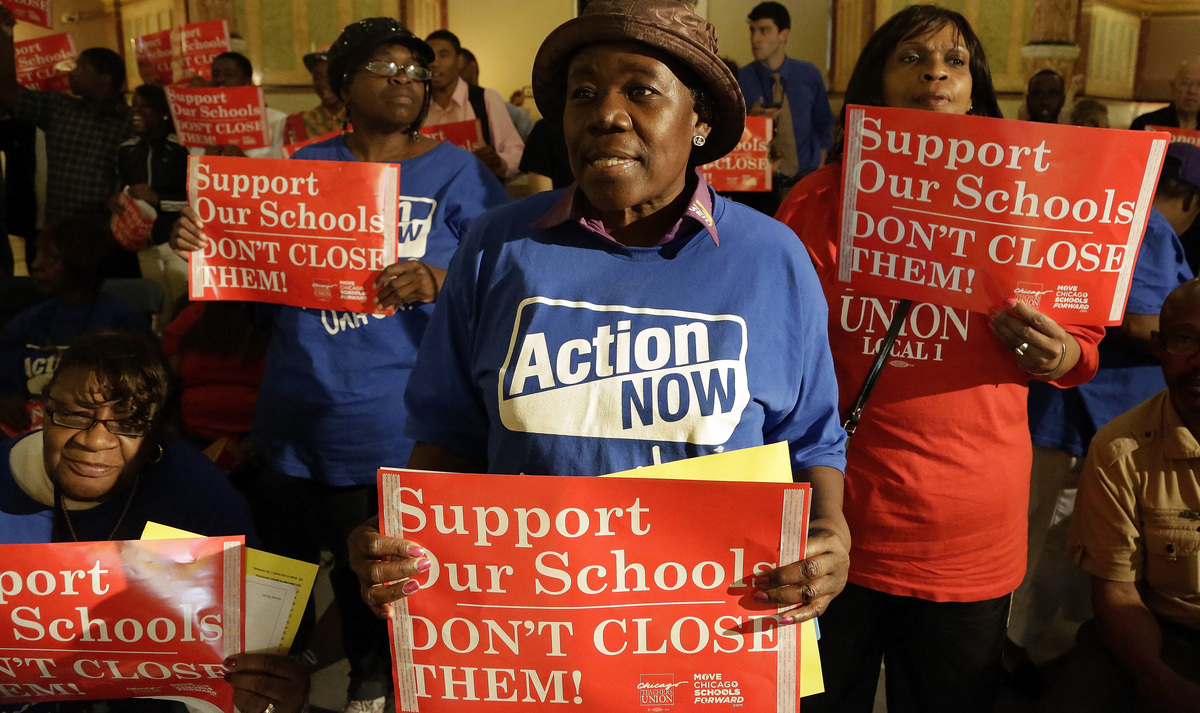 Protesters of Chicago Mayor Rahm Emmanuel's plan to close dozens of city schools rally in the Capitol rotunda in Springfield, Ill., on Wednesday. The Chicago Board of Education voted to close 50 schools.

A day after school officials approved shutting down 50 schools, the Chicago Teachers Union and community activists say they'll hold a voter registration and education campaign. The union is agitated that Mayor Rahm Emanuel, school board members and some lawmakers failed to listen to parents, teachers and others who called for the schools to remain open.

Before they voted yes on the sweeping school closure plan, school board members faced a torrent of criticism Wednesday. Protesters tried to conduct a sit-in at the front of the boardroom, but security officers escorted them out.

Sonya Williams, a parent who had come to testify in defense of her school, said she understood the passion and the outbursts.

This was the last time before the vote that people could make their pitch to keep schools open. Chicago Alderman Bob Fioretti was among them.

"Substantial research shows that closing schools and moving students increases the dropout rate and the incidence of street violence," he said.

The arguments did not deter Chicago Public Schools CEO Barbara Byrd-Bennett, who, along with Mayor Emanuel, has argued that Chicago has to "right-size" its school district. They have said demographic shifts in mostly black neighborhoods left schools underutilized — plus, the district faces a budget deficit of a billion dollars. 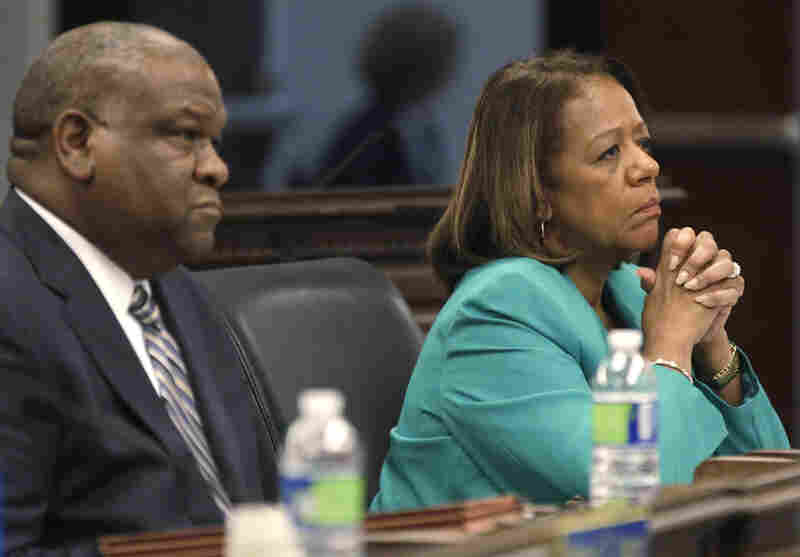 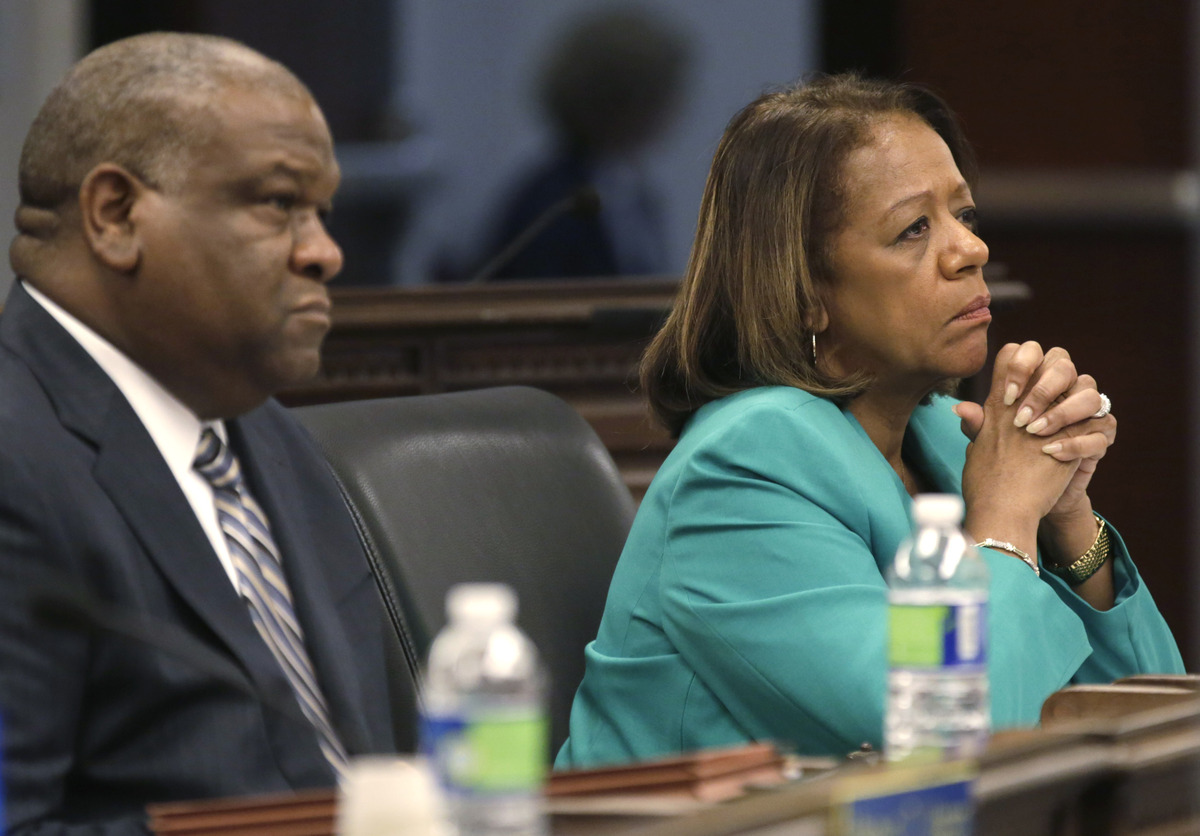 Chicago Public Schools CEO Barbara Byrd-Bennett and Board of Education General Counsel James Bebley listen at a packed board meeting Wednesday in Chicago. The board voted Wednesday on Mayor Rahm Emanuel's proposal to close dozens of schools.

Byrd-Bennett said the district had held marathon hearings, and it was time to do what's right.

"Like it or not, this system does have to change. By addressing our school utilization crisis, we have an opportunity to redirect limited resources to make investments in what matters," Byrd-Bennett said — investments that she said would let the schools students shift to have computer labs, libraries, art classes and air conditioning.

In a nearly unanimous vote, the board approved shutting 49 elementary schools and one high school program.

Okema Lewis, a parent who has kept track of the school board for a decade, called it a sad day.

First District To Close So Many Schools At Once

Hearing officers had recommended that the school board take more than a dozen schools off the chopping block. In the end, the board voted to save four.

Outside school board headquarters, Jesse Sharkey with the Chicago Teachers Union said that wasn't progress.

"There's an old expression, which is, 'Don't put a knife into my back 6 inches, pull it out a couple and say you're doing a favor,' " he said. "This move is irreversible, deeply harmful for the people in the schools, and they have no evidence to say that it's going to work."

Chicago becomes the first district in the nation to close so many schools at once. Timothy Knowles, head of the Urban Education Institute at the University of Chicago, says this effort will be closely watched.

"The true test is really going to be whether children perform better over time and whether the city makes good on its promise of safe passage," he says. That is, putting enough adults on the streets to help children get to and from school safely.

Zeroing In On School Governance

The fight over school closings is part of a political showdown that began earlier in the school year when teachers went on strike for the first time in 25 years. This week, Mayor Emanuel said he was standing firm on the school closings: "I will absorb the political consequence so our children have a better future."

The school board in Chicago is appointed by the mayor, and teachers union President Karen Lewis said the fight must eventually move to the ballot box.

"Our next plan is to have to change the governance of CPS [Chicago Public Schools]," she said. "Clearly this kind of cowboy-mentality, mayoral control is out of control. We're starting our deputy registration, and we will be registering voters across the city."

Their goal is to push the mayor and others who backed the school closings out of office, and to gather support for an elected school board.