Accessibility links
'Before Midnight': Jesse And Celine Are Older Now, And So Are We It took Jesse and Celine 18 years to find themselves back where they started in the lovely third installment of the series that began with 1995's Before Sunrise.

'Before Midnight': Jesse And Celine Are Older Now, And So Are We

'Before Midnight': Jesse And Celine Are Older Now, And So Are We 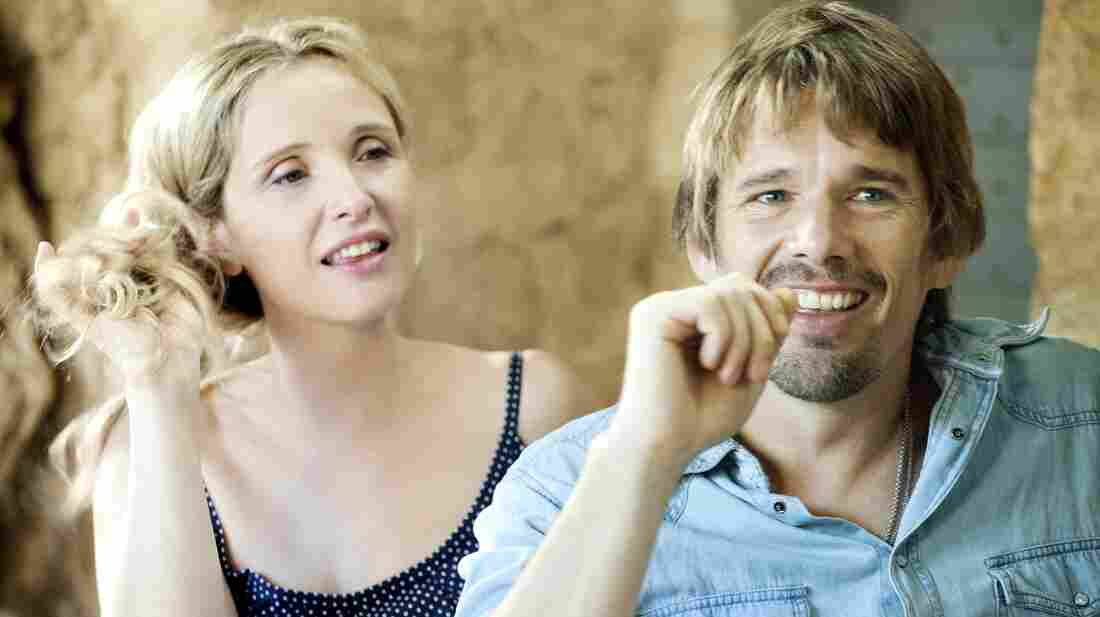 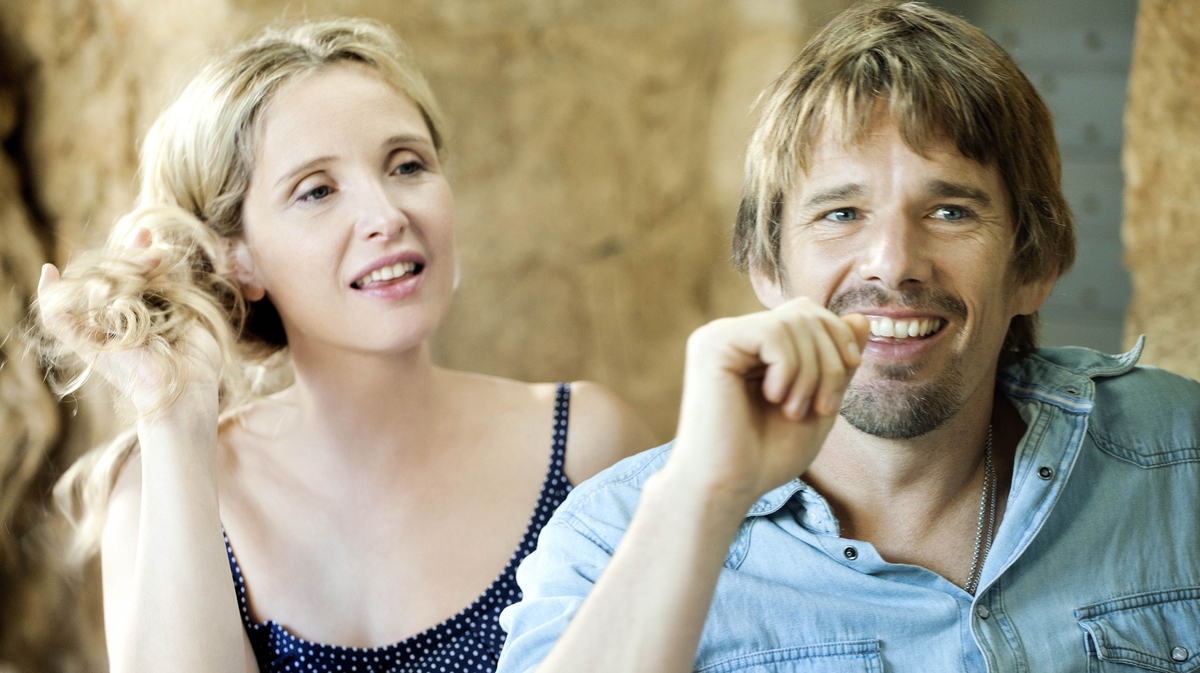 Julie Delpy and Ethan Hawke in Before Midnight.

[Note: Before Midnight is an especially difficult movie to write about, simply because for some people, even what has become of Jesse and Celine since Before Sunset is information that they don't want. But it's impossible — absolutely impossible — to write about the movie without talking about where they stand and what the premise is. I did my absolute best to spoil as little beyond that as possible. But if it's extremely important to you not to know whether he missed the plane, whether they've seen each other in the last nine years, or the rest of the table-setting that happens in the film's first few minutes (and if you've managed not to know until now), stop here.]

It took three movies for the stunning series made up of Before Sunrise, Before Sunset and now Before Midnight to go back to the beginning.

And what was the beginning?

Remember? They're on the train, and Celine gets up from her seat and moves, ultimately plunking herself down right across from Jesse and going back to the book she's reading. And he spots her out of the corner of his eye, an impossibly beautiful French girl, and he makes a little goggle-eyed smile into his book, because it's all just a little too unreal.

But that's not actually the beginning either.

In the very beginning, the reason Celine gets up and moves is that the middle-aged couple sitting near her is fighting in German, and she's tired of listening to it, even though she can't understand it. She winds up next to Jesse specifically because she's quietly but firmly put off by the ugliness of couplehood that's been corroded by years of togetherness; by familiarity that has bred contempt. The first conversation they ever have is about that couple, and the fact that Celine has heard that in time, couples literally lose the ability to hear each other — men lose their hearing of higher tones, and women of lower ones.

It took three movies and 20 years for Jesse and Celine to be the ones having the fight, and to worry that now that they've passed 40, they are becoming the couple they ran away from when they'd just passed 20. It's not hard to reshoot that scene in your mind's eye, with the 2013 Jesse and Celine fighting in the foreground while, in the background, the 1995 Jesse and Celine huddle to roll their eyes at those people who can't hear each other.

See, it turns out Jesse really did miss that plane at the end of Before Sunset, and he never really went home. They've been a couple ever since, and they have twin daughters, conceived shortly after they got together. His son and ex-wife live in Chicago and he's published more books; she's still a professional environmentalist. We meet them here in Greece, at the end of summer.

And they've learned, perhaps unsurprisingly, that if you think being separated for nine years is hard, you should try being together. Their relationship, originally so perfectly preserved and gorgeous in memory, has gotten scuffed and noisy and complicated. It's not just the two of them in a listening booth in a record store now. It's them and their daughters, and his son, and his ex-wife, and their friends, and their work, and ultimately everybody with the ability to intrude, which is ... everybody.

The neat trick of Before Sunrise was that as between the two of them, there were no obstacles for Jesse and Celine. They were perfect according to each other's greedy and generous interpretation. Everything that happened made them like each other more; every conversation they had made them seem more mutually well-suited. It's an almost perfect document of the intoxication of first meetings, of the sense that every time your phone wasn't ringing, this is the person who was supposed to be calling you, and every time you felt a space next to you, this is the person who was supposed to be in it.

The obstacles were simply guts and time; he had to get on a train in the morning so he could catch his flight home, and if they weren't going to get lost, somebody would have to find the nerve to say something before they parted. (Note, if you are under 25: we didn't have Skype or smartphones or Facebook then, so sometimes people we really liked got lost. P.S. Looking for them is one of the first things we did with Google.)

In the break between the first movie and Before Sunset, the big lingering question was whether they kept their promise to meet again six months later so they wouldn't get lost. The answer? They didn't. Life had intruded, and they'd gotten lost. That second leg of the story started with a broken promise, which announced that we were in a different place with these two. They knew more; more had happened to them. Still, they fell instantly into those same talks and walks. The obstacles were still external but more complex — professional obligations, other relationships, timing, geography, and the assorted bullpucky of life that keeps most things from ever happening. They had the opportunity to take a regret and transform it into a rescue, it seemed.

Did You Show Up in Vienna?
Before Sunset — MOVIECLIPS.com

But now they are over 40. They have children. They have outgrown the question that clearly was on their minds when they were in Vienna: Is this meant to be? Now, there's no such thing as "meant to be." Now, there's only whether or not they will keep trying.

Before Sunrise was a perfect little romance, and Before Sunset an equally impressive if less unexpected artifact, like a comet's tail. But when you see Before Midnight, it seems like it could all have only been leading to this story, and to these conversations.

This is a love story, as it turns out, rather than a fairy tale. And in a real love story, the roles of destiny and fate and chance, all of which are critical in Sunrise and still present in Sunset, fade over time, to the point where what's left is a bunch of choices, most of which are variations on a single theme — is this worth it? First it was magic, then it was a thicket of circumstances, now it's exhausting work and ultimately the weighing of options.

In a perfect inversion of the way we first met them, Jesse and Celine have all the time in the world in Greece. They can wander all they want, have all the sex they want, and certainly talk all they want. Nobody has a train to catch or another relationship; nobody has a reason to leave at all. Everything that makes it hard is in the room with them, not outside. And the writing plays fair, because everything that's in the way has been there from the beginning: she can be stubborn and defensive; he can be mean and dismissive when he thinks she's being irrational. (Remember the palm reader?) He's a sometimes tiresome writer; she's a sometimes self-righteous complainer. And all of that, or at least the groundwork for all of that, was there in Vienna and in Paris, and now it's there in Greece. It's not happy that scruffy youth often matures into embittered middle age, or that the young guy with a funny idea about a 24-hour-a-day cable-access reality show becomes the older guy who won't shut up about his high-concept book project, but it's fair.

But perhaps what's richest about taking these three films together is circling back to Jesse and Celine as nervous twentysomethings and seeing how filled with anxiety they were about the future. He dreaded being a bad father, she dreaded being stuck with a man who wanted to change her, and they both feared that they were doomed to become boring and sad and dead inside and that they'd lose the ability to feel like they did in that strange little bubble. When she asked him whether he knew any happy couples and he said he did, but he suspected them of lying to each other, it didn't seem at the time like they were talking about whether they could ever be happy, but now it seems like they were.

Back then, Celine told Jesse a story of her grandmother spending her life with a man other than the one she really loved. Jesse assures her the other guy would only have disappointed Grandma. "People have these romantic projections they put on everything," he tells her, "that's not based on any kind of reality."

They talk compulsively in that first movie about what will happen later — he coaxes her off the train by telling her she'll be glad she did it in 10 or 20 years. She wonders what he'll say about her years from now if they have sex on the one night they're together. They rehearse the conversations they'll have about each other. They wonder whether their little bubble might survive in daylight: he says, barely knowing her, that if his only choices were marrying her and never seeing her again, he'd marry her. But that's crazy, of course. You can't do that, of course. When it's morning, you get on the train, because that's what you do. Daylight intervenes.

It's not that there's never been a story told about the maturation of a relationship over years, but there is something about the way they executed these films, in real time, that cannot be duplicated with makeup. People age unpredictably — if you tried to dress up as You In 20 Years, you would fail, because there's a mystery to whether faces get craggier or softer or fuller, and to how women's hips change when they have kids. This is why people go to high school reunions: everyone is a forward projection brought to life. You are more in the past than in the present, a time traveler sent back to tell yourself who went gray first. The Before movies, taken together, are a trippy knot of consequences and anticipation, where seeing the last one makes you want to watch the first one and seeing the first one makes you want to watch the next one, because they all mean more as pieces than alone. Before Midnight is the flawed future of those kids in Before Sunrise; Before Sunrise is the bittersweetly remembered past of that couple in Before Midnight. There's a sense of forward and backward motion, because they've been truthful about the fact that everything looks one way now and a different way later.

Before I went to see Before Midnight, I watched Before Sunrise and commented that it was startling, even as someone who's seen it many times, to see how young they really were. And someone pointed out something remarkable to me: For those of us who were roughly the same age as Jesse and Celine, it's not that we don't remember how young they were; it's that we never registered how young they were to begin with, because we didn't register how young we were.