Accessibility links
Really Most Sincerely Bad: Fox's Nasty 'Does Someone Have To Go?' A distasteful new show forces employees to turn on each other in a phony display of power.

Really Most Sincerely Bad: Fox's Nasty 'Does Someone Have To Go?'

Really Most Sincerely Bad: Fox's Nasty 'Does Someone Have To Go?' 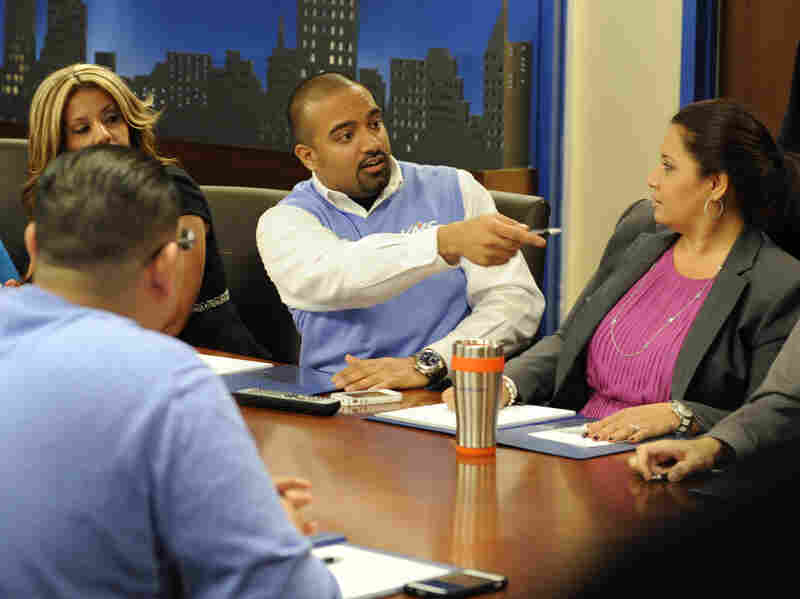 Employees argue over who's the worst in Fox's Does Someone Have To Go? Chris Tomko/Fox hide caption 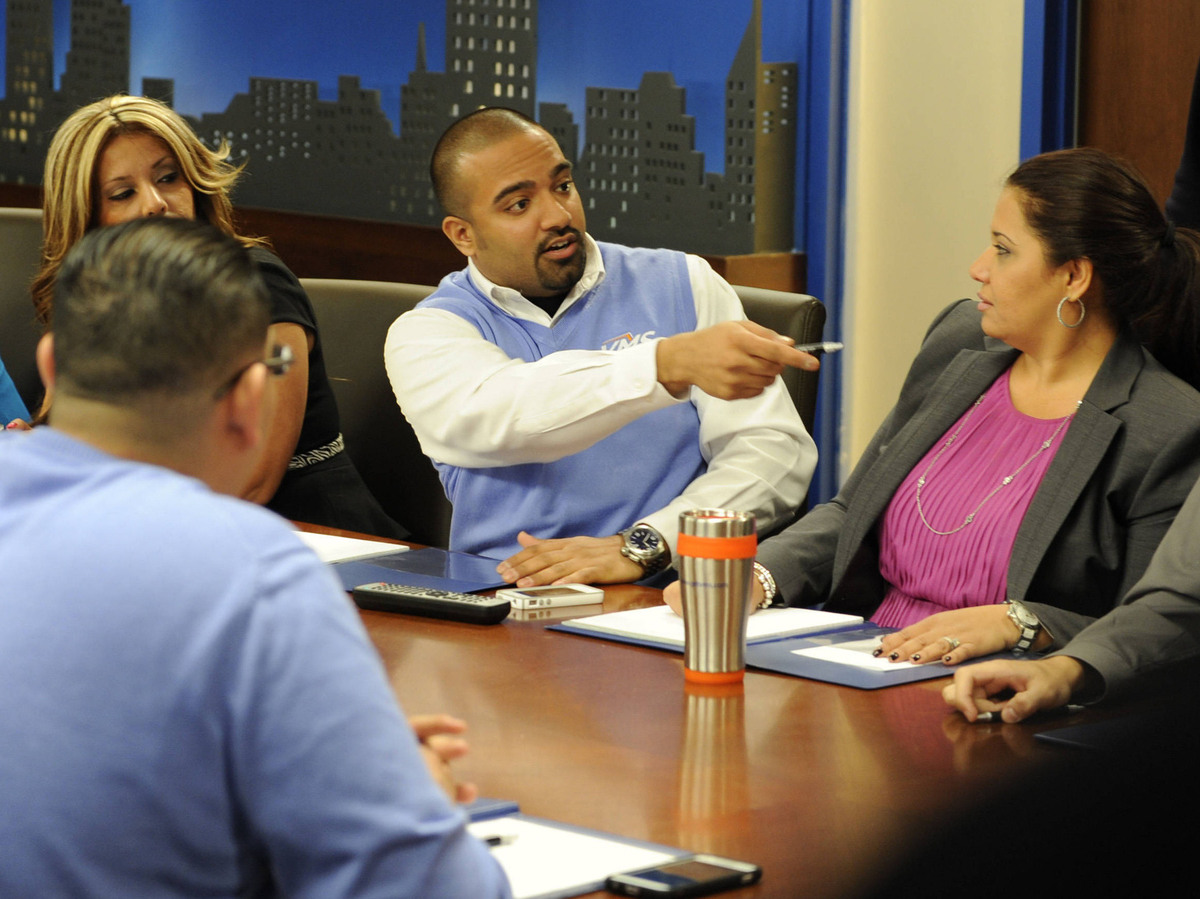 Employees argue over who's the worst in Fox's Does Someone Have To Go?

The biggest problem with pretending all of reality television is categorically odious is that it denies us the opportunity to identify and hold accountable what is actually odious. To those who insist that it's all gross — that no matter the documentary aspirations or good-natured competitiveness of plenty of unscripted television, it all belongs in the same giant dumpster — I am your Crocodile Dundee of distaste: Those aren't destructive and grotesque and irresponsible. This is destructive and grotesque and irresponsible.

And by "this," I mean Fox's new show, Does Someone Have To Go?

The premise of Does Someone Have To Go? is that we visit a troubled business and the employees are encouraged to "take over," which here means that they are given the authority to (supposedly) fire someone from within their ranks. This is presented as a very brave move by the owners, as if they are actually surrendering control, rather than refusing one of the fundamental tasks of management — making painful decisions — and pushing it off onto their employees.

This is essentially like claiming that because there's a food shortage at the zoo, you've let the lions "take over," by which you mean that they can decide which one of them will be killed and eaten by the rest. They can't leave the zoo, they can't get more food, they can't can the zookeeper and replace him with someone who will manage their environment a little better. But if they decide among them that one of the lions needs his neck ripped out, that's up to them, and nobody will interfere. The lions are "in charge."

It is in-group autonomy only — it gives people only the right to change the allocation of resources within the group of employees, not the right to change the fate of the group as a whole. Nevertheless: "We're going to put the power of this company in your hands," says the boss with a straight face in the first episode. The other boss says that they'll face "all kinds of difficult questions," which turn out to be: "Who should be demoted? Who should get a pay cut? Who needs anger management classes?" And, of course, they'll decide whether Someone Has To Go.

So, you know. Not all the kinds of difficult questions. Just the ones where the answer is, "Take it out of that guy's hide."

The company in tonight's opener is Velocity Merchant Services, or VMS, a firm that sells credit-card processing machines and is apparently featured here because Dunder Mifflin's depiction of paper sales as a simulacrum of American office life was considered too glamorous. Run by a husband and wife team, it has more than 70 employees, but is "a dysfunctional mess," says the grim but titillated announcer.

And why is it dysfunctional? "Often times," the announcer intones, "it's difficult to tell which of the employees is at fault." Is it the guy they call "Uncle Mike," subtitled "THE MOTORMOUTH"? Is it Shawn, "THE JERK"? Is it Zoe (a man), "THE SLACKER," who sometimes talks (oh, the humanity!) about wishing it were time to go home? Is it one of the members of the owners' family? Tina, "THE TATTLETALE"? Kout, "THE BOSS'S MOM"? The owners say that even members of their own family could be fired! If, that is, everybody wants to live with the boss after firing her mom. Want to place your bets?

The employees select three of their number to be imperiled — the reality-show standard "bottom three." How do they get there? First, they're herded into a room and shown footage of interviews in which the other employees dump on them. This isn't fun for anyone, obviously, even though when being interviewed on camera, they undoubtedly knew it would come to light eventually.

But then, they bring out the big guns: everybody gets to see how much money everybody else makes. Note that if the problems are personal dysfunction, as is claimed earlier, then employees knowing who makes what has no purpose. The reason for revealing salaries is to breed resentment and only to breed resentment — to suggest that the rungs of the economic ladder you need to worry about are the ones just above you that you can reach. Knock those people down to where they belong, and you're getting somewhere. "There's no better way to get everybody at each other's throats," says one employee, "than to expose what everybody makes."

The moral of the story is that when you feel frustrated at work and economically helpless, the problem is the person you bump into at the coffeemaker who is earning just slightly more than they should, doing just slightly better than they should, getting a little too much for a little too little, and that by rendering that person unemployed, or knocking him or down a peg, you will be better off. "Ask yourself," the bosses say, "who's undervalued ... and who's overvalued."

And what do the employees do? I will tell you that, asked to pick three people to get rid of, two of them are among the worst-paid in the company. They've just heard about everyone's salary, and what they decided to do was target people who don't make much, but who they think are still somehow getting away with something.

It's a similar nasty fantasy to CBS's also obnoxious Undercover Boss, which shows an unerringly kind, humble CEO joining the ranks of his employees just long enough to bestow Queen For A Day-style gifts on a few select employees with sob stories. If they change much, it's often to give a little talking-to to middle managers, on the theory that they're the real problem. It always turns out that company policy is to be good to employees, kind, generous, fair — it's that assistant manager who makes a tiny bit more money than you do who's twisting things around. You want to be mad at somebody, it says, be mad at that guy. (My friend and co-panelist Stephen Thompson talked about this on an early episode of our podcast, Pop Culture Happy Hour, in which he bemoaned the show's introduction with its simplistic view of every company CEO as "your benevolent daddy.")

Fox didn't show critics the end of the opening two-parter, so I couldn't tell you whether they fire someone even if I wanted to. My guess is that they don't, and that even if they do, they reach for a feel-good solution where they grow in understanding, where all this brutal treatment and disrespect turns out to be yet another Benevolent Parent move by the owners where everyone is better off than if they'd never been forced into a cage match that seems to have no motive other than making everyone miserable.

But I can tell you how Fox describes the second hour: "In this episode, the bottom three employees ... plead with the rest of the employees to keep their positions." People begging and pleading to keep their (in some cases) low-paying jobs from people who make (in most cases) a bit more than they do — doesn't that sound like a great big hoot?

The opening for Does Someone Have To Go? features an animation in which two figures are standing with what seem to be boxes of their possessions in their hands, waiting for a verdict. Suddenly, a trapdoor opens and one of them is dropped through it.

It's not that this is the most vile thing television has ever offered; I'm sure people could come up with much worse. But the idea of granting phony agency to employees to target and punish each other, as if fixing a troubled company means breeding resentment among those who probably stand to profit the least if things go better? It's pretty bad, and pretty gross, and pretty distasteful, and unlike a lot of "guilty pleasure" television, there's really not much pleasure to be found.