Accessibility links
Breaking Down Obama's New Blueprint For Fighting Terrorism In a major speech, the president rejects the idea that the country can fight an opened-ended "global war on terror." In setting his own guidelines, he defines the standards for using drone strikes and again calls for closing the Guantanamo Bay prison. 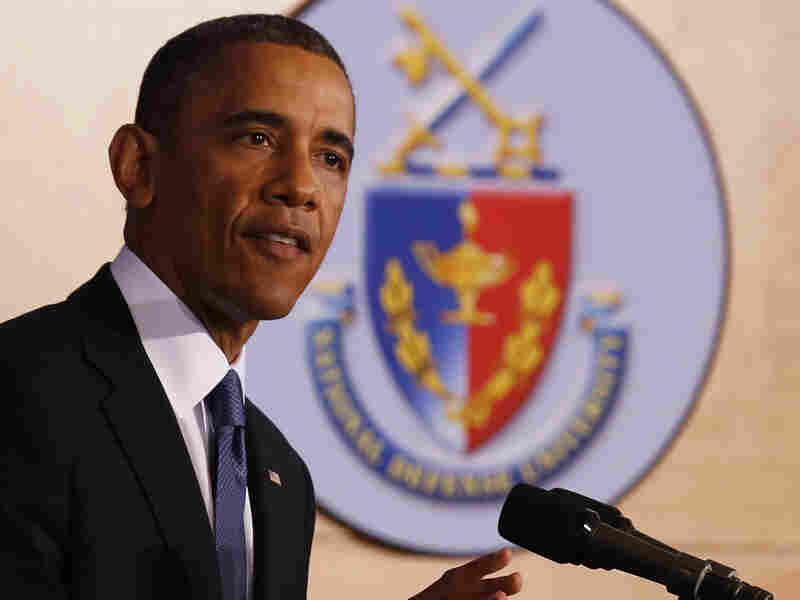 At the National Defense University in Washington on Thursday, President Obama outlined plans to limit the use of U.S. drone strikes, and pledged to shut down the military prison at Guantanamo Bay, Cuba. Larry Downing/Reuters/Landov hide caption 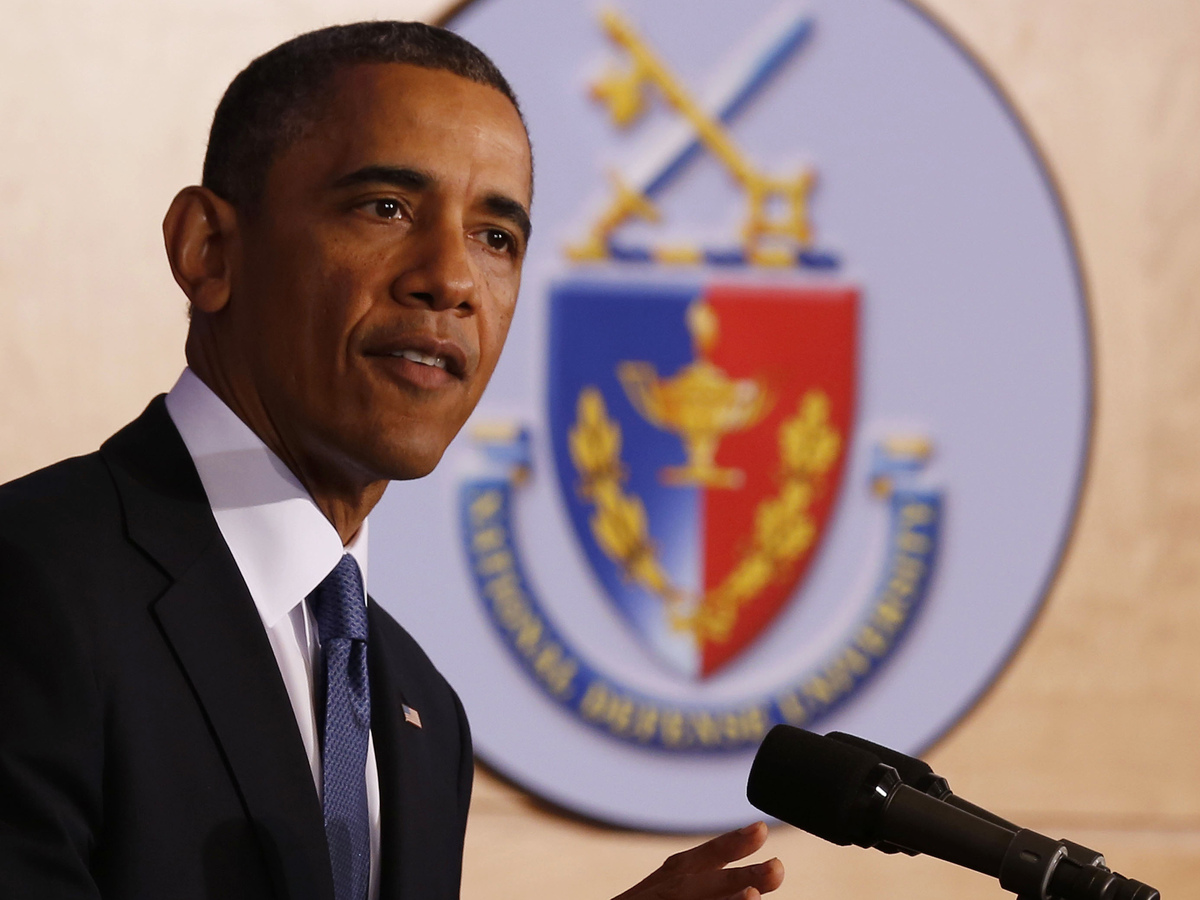 At the National Defense University in Washington on Thursday, President Obama outlined plans to limit the use of U.S. drone strikes, and pledged to shut down the military prison at Guantanamo Bay, Cuba.

Ever since the Sept. 11 attacks, the U.S. search for a coherent counterterrorism strategy has revolved around three basic questions:

1. How do we locate suspected terrorists?

2. Once located, how do we go after them?

3. If captured, what do we do with them?

In a major speech at the National Defense University in Washington on Thursday, President Obama addressed all three questions that have been the source of shifting policies and fierce national debates for over a decade.

While the president is sure to face continuing criticism from both the left and the right, he laid out his blueprint for counterterrorism in his second term and spoke of a day when the country would no longer be on permanent war footing.

On question No. 1, locating the terrorists, Obama emphasized that the terrorism threat had changed dramatically over the past decade.

The U.S. is no longer hunting for a large, centralized al-Qaida that is deeply rooted in one place (Afghanistan), headed by a prominent leader in Osama bin Laden and possessing the capacity to carry out large-scale attacks.

"Now make no mistake: Our nation is still threatened by terrorists. From Benghazi to Boston, we have been tragically reminded of that truth. We must recognize, however, that the threat has shifted and evolved from the one that came to our shores on 9/11," Obama said.

"Lethal yet less capable al-Qaida affiliates," he continued. "Threats to diplomatic facilities and businesses abroad. Homegrown extremists. This is the future of terrorism."

In contrast to former President George W. Bush, Obama has opposed a large military footprint in favor of smaller, more focused operations and a preference to seek out partnerships with other countries, even problematic ones such as Pakistan and Yemen.

"We must define our effort not as a boundless 'global war on terror' — but rather as a series of persistent, targeted efforts to dismantle specific networks of violent extremists that threaten America. In many cases, this will involve partnerships with other countries," Obama said.

On question No. 2, the pursuit of terrorism suspects, the president's signature program has been the widespread use of drones, not only in Iraq and Afghanistan, but in countries where the U.S. is not at war, such as Pakistan, Yemen and Somalia.

"But despite our strong preference for the detention and prosecution of terrorists, sometimes this approach is foreclosed," the president said.

He reserved the right to use drone strikes when it is not feasible for U.S. forces or a host country to detain suspects, describing such strikes as effective, legal and moral.

The frequency of drone strikes went up sharply under Obama during his first years in office compared with Bush. But the number has been coming down recently. According to the New America Foundation, which tracks drone attacks, there were more than 100 in Pakistan in 2010. This year there have been a dozen.

The CIA has played a leading role in the drone strikes, and this has drawn criticism from those who say the agency should focus on collecting intelligence rather than carrying out lethal operations. Administration and military officials have indicated that the military is expected to take the lead in drone operations, though Obama did not address this explicitly in his speech.

The president has come under frequent criticism, particularly from liberals, for the secrecy surrounding the drone campaign. The president spoke to this audience as he set down his guidelines for drone strikes:

"America does not take strikes when we have the ability to capture individual terrorists — our preference is always to detain, interrogate and prosecute them. America cannot take strikes wherever we choose — our actions are bound by consultations with partners, and respect for state sovereignty. America does not take strikes to punish individuals — we act against terrorists who pose a continuing and imminent threat to the American people, and when there are no other governments capable of effectively addressing the threat. And before any strike is taken, there must be near-certainty that no civilians will be killed or injured — the highest standard we can set."

The Prosecution Of Terrorism Suspects

On question No. 3, prosecuting suspects, Obama said the U.S. had at times violated its own principles.

"And in some cases, I believe we compromised our basic values — by using torture to interrogate our enemies, and detaining individuals in a way that ran counter to the rule of law," he said.

He again pledged to shut down the Guantanamo Bay prison, something he promised at the beginning of his first term in 2009, though he has made minimal progress.

A total of 166 suspects are still being held, and many are on hunger strikes. Roughly a third of all detainees are from Yemen and have been cleared for release. But Obama said Congress had made it difficult for the administration to either release the prisoners or to put them on trial in the U.S.

"Look at the current situation, where we are force-feeding detainees who are holding a hunger strike. Is that who we are? Is that something that our founders foresaw? Is that the America we want to leave to our children?" the president asked.

The president also called for a site in the United States where terrorism suspects could be tried before military commissions. At present, only a small number of such cases are underway at Guantanamo.

"To the greatest extent possible, we will transfer detainees who have been cleared to go to other countries. Where appropriate, we will bring terrorists to justice in our courts and military justice system. And we will insist that judicial review be available for every detainee."