Accessibility links
Stunned By Military Sex Scandals, Advocates Demand Changes As the nation prepares to mark Memorial Day, outrage has been building on Capitol Hill and beyond over the military's failure to repair a system that has placed service members in more danger of sexual assault than of battlefield injury. 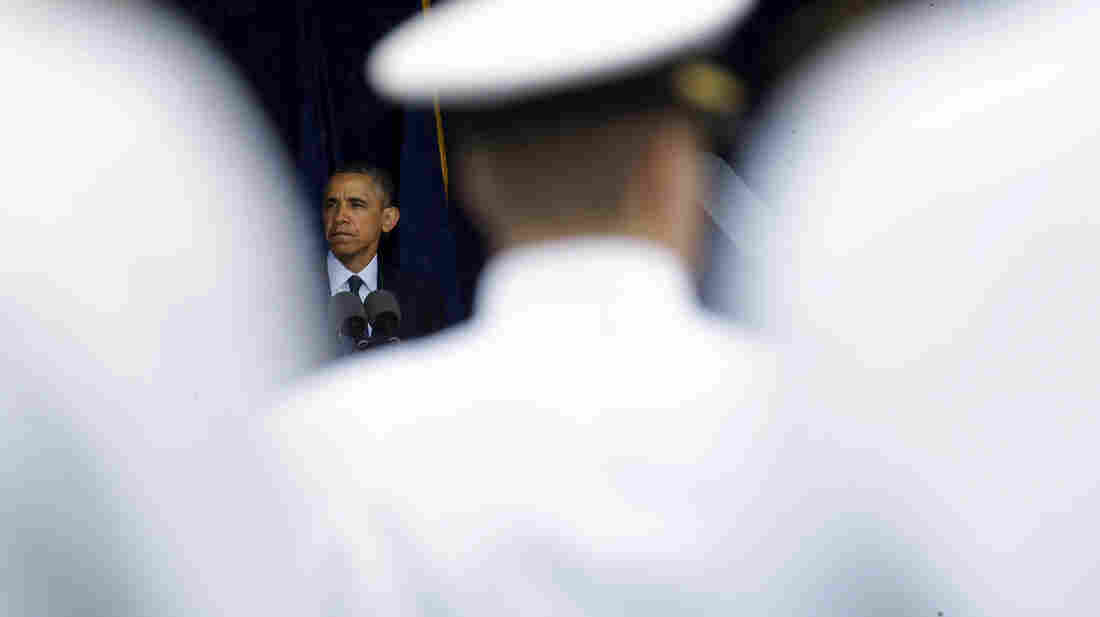 President Obama speaks at the commencement ceremony for the United States Naval Academy in Annapolis, Md., on Friday. The president urged new graduates to exhibit honor and courage in tackling incidents of sexual assault as they assume leadership positions in the military. Patrick Semansky/AP hide caption 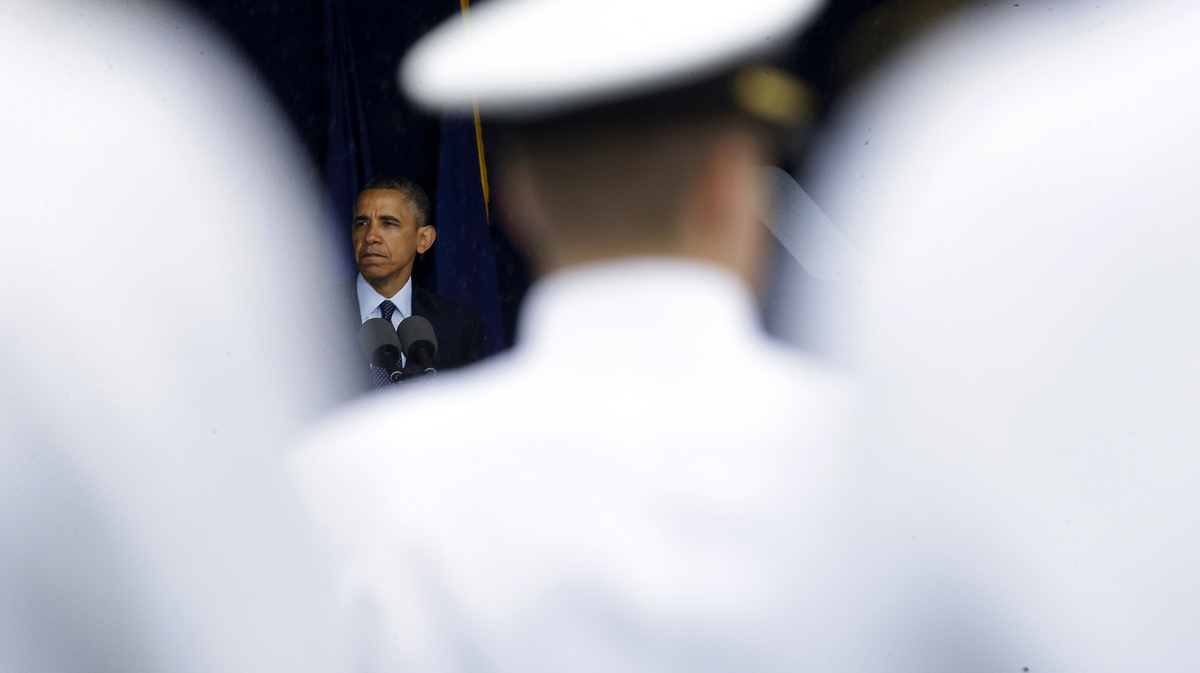 President Obama speaks at the commencement ceremony for the United States Naval Academy in Annapolis, Md., on Friday. The president urged new graduates to exhibit honor and courage in tackling incidents of sexual assault as they assume leadership positions in the military.

West Point alum Donna McAleer was at her Utah home last week when she got a call asking if she'd "seen the latest."

A male Army sergeant, a friend told her, had just been charged with secretly photographing and videotaping at least a dozen female cadets at McAleer's alma mater.

Many of the women were naked; some images were taken in a bathroom at the U.S. Military Academy in New York. The revelations followed a rash of recent incidents, among them stunning reports that at least three ranking male officers overseeing military sexual assault prevention programs have themselves been charged in the past month with crimes ranging from sexual battery to stalking.

"How many of these stories are we going to hear?" asks McAleer, a field admissions officer for the academy. "I want to be able to, with confidence, encourage people — daughters and sons — to serve their country."

As the nation prepares to honor the war dead this Memorial Day weekend, a seeming epidemic of sexual assault and abuse reports has severely shaken that confidence.

A new Pentagon study estimates that 26,000 people in the Armed Forces were sexually assaulted last year. It's not entirely clear top brass understands the scope of the crisis: Air Force Chief of Staff Gen. Mark Welsh suggested in recent Senate testimony that the spike in reports of sexual assaults in the military could be blamed on the "hook up mentality" of the country's young people.

Welsh has since apologized, but not before fanning outrage that's been building on Capitol Hill and beyond over the military's long failure to repair a system that has placed service members, especially women, in more danger of sexual assault than battlefield injury.

Every day, our civil servants do their jobs with professionalism — protecting our national security and delivering the services that so many Americans expect. But as we've seen again in recent days, it only takes the misconduct of a few to further erode the people's trust in their government. That's unacceptable to me, and I know it's unacceptable to you.

And against this backdrop, what I said here four years ago remains true today: Our military remains the most trusted institution in America. When others have shirked their responsibilities, our Armed Forces have met every mission we've given them. When others have been distracted by petty arguments, our men and women in uniform come together as one American team.

And yet, we must acknowledge that even here, even in our military, we've seen how the misconduct of some can have effects that ripple far and wide. In our digital age, a single image from the battlefield of troops falling short of their standards can go viral and endanger our forces and undermine our efforts to achieve security and peace. Likewise, those who commit sexual assault are not only committing a crime, they threaten the trust and discipline that make our military strong. That's why we have to be determined to stop these crimes, because they've got no place in the greatest military on Earth.

"We have relied on the chain of command to deal with this issue, and the chain of command has failed for decades," says retired U.S. Army Maj. Gen. Dennis Laich. "America gives us their sons and daughters, and we've failed to discharge the responsibility to take care of them."

It's been more than two decades since the sexual-assault-and-hallway-grope-a-thon at the Navy's "Tailhook" aviators' convention in Las Vegas, which led to the resignation of the Navy secretary.

It's been a decade since the lid was blown off a rape and sexual assault scandal at the U.S. Air Force Academy in Colorado Springs, where the school's top four officials were removed.

It's been a year since investigators at Lackland Air Force Base in San Antonio found evidence that a dozen instructors had engaged in "sexual misconduct," including rape, leading to the conviction of at least nine of them.

So it should come as no surprise that parents, with more and more frequency, are asking recruiters if their daughters, and sons, will be safe in the military — a question prompted not by roadside bombs, but assault statistics.

McAleer, the West Point recruiter and author of Porcelain on Steel, a collection of profiles of accomplished female academy graduates, says the answer is no, as long as the military continues to rely on its chain-of-command system to hear, investigate and prosecute assault claims from the ranks.

"It's delusional to think we can do this over and over and get a different result," she says, referring to statistics that show those in the chain of command are the perpetrators in a quarter of cases of alleged assault.

She, and others, including New York Sen. Kirsten Gillibrand, a member of the Senate's Armed Services Committee, argue that the military should create a separate legal process to deal with sexual assault claims.

Gillibrand, a Democrat, has sponsored legislation to do just that. A separate bill proposed by Sen. Claire McCaskill, a Missouri Democrat and a member of the Armed Services Committee, would not require the new legal structure, which she argues the Pentagon would work to block.

Her legislation focuses on measures that would remove commanders' ability to overturn military sexual assault convictions, and require dismissal or a dishonorable discharge for service members found guilty of rape or sexual assault.

Similar legislation has also been proposed in the House, and, as in the Senate, is backed by members of both parties in efforts led by women.

Commanders' authority to overturn convictions came under fire earlier this year when it was revealed that Air Force Lt. Gen. Craig Franklin reversed the aggravated sexual assault conviction of Lt. Col. James Wilkerson and then reassigned him as safety chief at a base in Tucson, Ariz.

Wilkerson had been convicted of assaulting a civilian contractor while at Aviano Air Force Base in Italy.

McCaskill has held up the nomination of another top Air Force commander and former astronaut, Lt. Gen. Susan Helms, to a NASA post because she overturned the aggravated sexual assault jury conviction of an Air Force captain whose victim was a female lieutenant.

The military, like any organization, has long focused on protecting the institution. And it has relied on the traditional chain of command to deal with the sexual assault issue.

"No one wants to take bad news to their boss," said Laich, the retired major general who now works in a program at Ohio Dominican University to encourage veterans to use their college benefits.

"You have an institution that consciously or unconsciously has given the message that they don't want to hear that bad news," he says.

Advocates for change say that the bad news can no longer be easily hidden, however. Information networks, the 2012 Academy Award-nominated documentary The Invisible War about sexual abuse in the military, and the record number of women serving on congressional armed services committees, they argue, have put the issue before the public in a way never before seen.

"There are 230,000 women serving in the military. There's a documentary like The Invisible War. There are lawsuits, and there's a technology-driven global economy that allows information to be disseminated," says McAleer. "All of that coming together has brought this front and center."

Susan Burke, a Washington lawyer who represents service members, including those featured in the documentary, says several military assault cases are pending in civilian court.

She notes, however, that winning outside of the military justice system is "an uphill battle."

"Supreme Court jurisprudence is very protective of the military," she says. "The judiciary is reluctant to hear cases brought by service members."

In response to the crisis, the military has begun programs to reduce sexual assault crimes and provide victim support, and has taken steps to strengthen sexual assault investigations and prosecutions.

Last year, then-Secretary of Defense Leon Panetta, after seeing The Invisible War, required that sexual assaults be reported to a higher level commander; he also established special victims units in each branch of the military.

And the Obama administration recently held a bipartisan meeting of congressional women serving on the House and Senate armed services committees.

Having more women on the committees "has made a tremendous difference," says Tanya Biank, author of Undaunted: The Real Story of America's Servicewomen in Today's Military. "They are the ones who are leading the way and bringing it to attention on a national level."

Biank and others say they see sexual assault as an issue that compromises not only recruitment, but readiness and national security, particularly given the growing number of women in the military.

The fight to change the ways of the military, by altering through congressional action the Uniform Code of Military Justice, has really only just begun in earnest.

What Laich and other advocates say they want to see is the military expand its focus from prevention to aggressive prosecution.

"We may have to err on the side of being perhaps overly harsh with those who are found to be guilty of these kinds of infractions," he says. "There's a tendency to give the benefit of the doubt to the perpetrator, and that has to be turned on its head."

"These aren't just social issues, these are real national security issues that affect our ability to man the force," Laich says. "When you have data that says a female service member in Afghanistan is more likely to be raped by a fellow service man than killed by the Taliban that tells you something about where we are on this issue."