Accessibility links
Tornado Safe Rooms In Schools A Popular, But Costly Idea In the aftermath of the destruction in Moore, Okla., residents throughout Tornado Alley want storm shelters installed in schools. Some schools in the region already have them, but funding to build new ones is hard to come by. 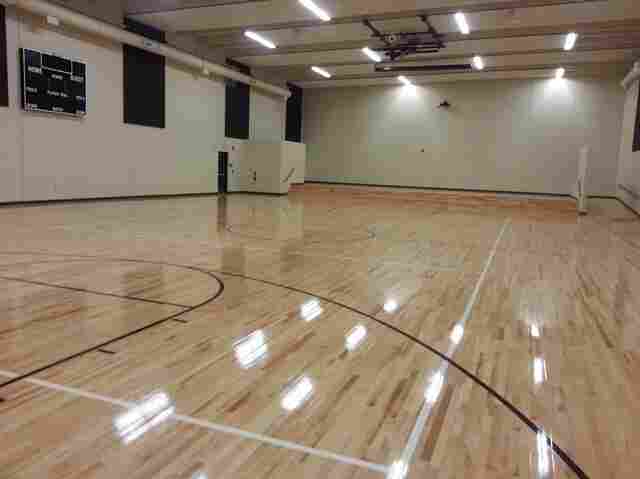 Many school safe rooms, like this one inside Jeffries Elementary in Springfield, Mo., also serve as gymnasiums. Constructed with a $1.6 million grant from FEMA, which covered 75 percent of the cost, the shelter can hold more than 500 people — enough to accommodate all the school's students and employees. Scott Harvey/KSMU hide caption 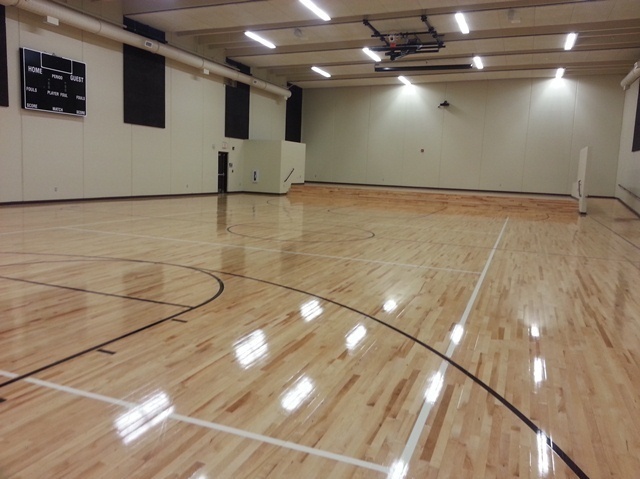 Many school safe rooms, like this one inside Jeffries Elementary in Springfield, Mo., also serve as gymnasiums. Constructed with a $1.6 million grant from FEMA, which covered 75 percent of the cost, the shelter can hold more than 500 people — enough to accommodate all the school's students and employees.

In the days since a tornado ripped through Moore, Okla., talk of constructing safe rooms in public schools has become commonplace.

In southwest Missouri, officials have built a few of them already, and they are seeking funding to build more.

'A Sense Of Peace'

Karina O'Connell is preparing dinner tonight under the pavilion at Phelps Grove Park in Springfield, Mo., where she's eating with her 9-year-old twin sons, Samuel and John Patrick.

A mixture of curiosity and fear has the boys often going online to track big storms. Their mother says the family's recent addition of a safe room at home helped ease a lot of concerns, especially for John Patrick.

"Now that we have our storm shelter, he was just, I mean he was still upset, but once we were in there, you know, we were playing games, he was very calm," O'Connell says. "It was ... a sense of peace for us that we actually have this now."

But when at school at Sunshine Elementary, the O'Connell boys don't have the safest place to ride out a storm. While Springfield has more than 50 school buildings, so far only three are equipped with a safe room that meets FEMA 361 standards, a room that can withstand the impact of an EF-5 tornado.

'Some Peace Of Mind'

Dave Bishop is the district's director of facilities. He says when FEMA awarded funding to the district, safe rooms were built at three schools.

One of them is at Jeffries Elementary, where Bishop shows off a safe room that was built from pre-stressed concrete, with straps at the ceiling capable of withstanding wind shear. FEMA's $1.6 million grant paid for 75 percent of the cost of this room, which also serves as the school's gymnasium and can protect about 500 people. When school's not in session, it serves as a shelter for residents within a half-mile radius.

"We were able to take up a matching grant of 25 percent and build this room, which I think speaks for itself. It's a very nice facility and I think provides some peace of mind," Bishop says.

As for the buildings that don't have active safe rooms, Bishop says the district has a crisis plan tailored to each site, placing students where structure and building materials are the strongest. But after the storm in Oklahoma, O'Connell is considering a different plan for her children.

"I think I might be looking at the weather a little closer and then possibly taking them out of school in order to get them in my shelter," O'Connell says.

'Find A Way To Pay For This'

Helen Grant didn't have that option.

Her two daughters attend Central Elementary in Moore, Okla., which has no safe room and was placed on lockdown before Grant ever had a chance to pick them up. After seeing the destruction at Plaza Towers and Briarwood Elementary, she decided to sign a petition that calls on Oklahoma Gov. Mary Fallin to require all schools in the state to build safe rooms.

"And even if the money is hard to come by, I'm sure people could pay for it. Our state has given tax breaks to big businesses. I'm sure they can find a way to pay for this," Grant says.

Bob Roberts, the emergency manager for Tulsa Public Schools, hopes to someday have safe rooms in all Oklahoma schools, but he's concerned about how to pay for them.

"We have to look at what's the most effective thing we can do with the money we have available," he says.

If nothing else, says Roberts, he believes schools should be reinforced to better withstand a storm's impact.

Back in Springfield, Mo., Storm Shelters' founder Jeff Olsen is in his showroom, pointing out the damage to a steel shelter caused when a two-by-four was shot at 100 mph, part of testing performed on the safe rooms he builds for homeowners.

These are the kinds of shelters that Moore's mayor says he'd now like to require in every new home built there.

But when Joplin, Mo., officials tried to do just that following the devastating tornado there two years ago, the City Council deemed that making that mandatory would be too expensive for homebuilders.