Accessibility links
Movie Review - 'Before Midnight' - Richard Linklater Spends More Quality Time With Jesse And Celine Julie Delpy and Ethan Hawke return for the third in Richard Linklater's loosely peerless Before series, and they've never been more persuasive — nor has the storytelling. (Recommended) 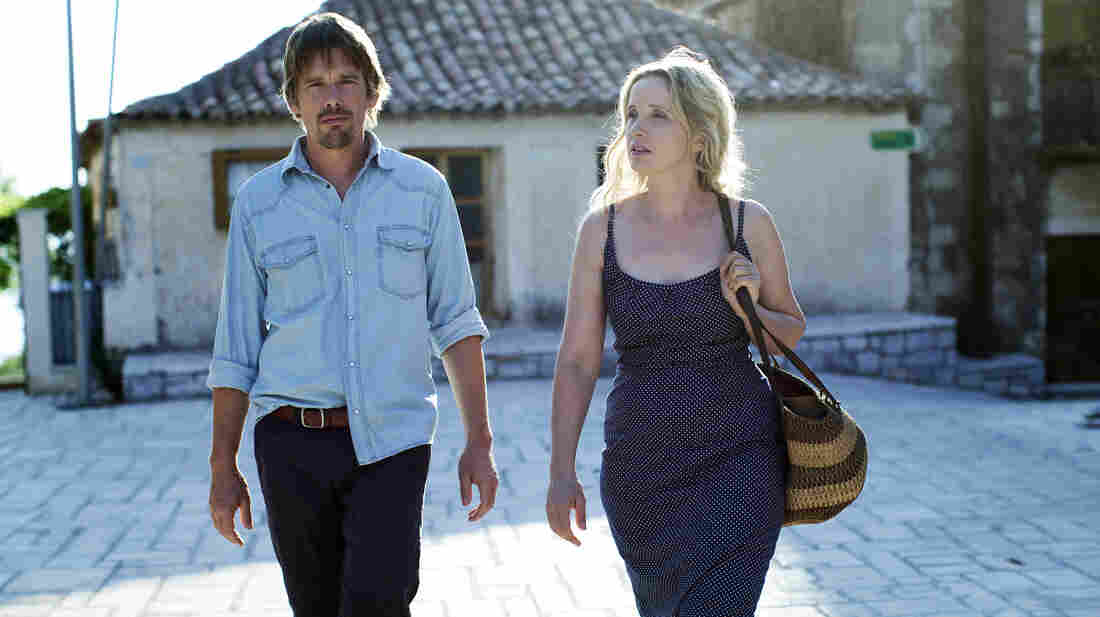 Celine and Jesse are sporting a few physical wrinkles — and working through some unsettling relational ones — in Before Midnight, but that just makes this third installment of their once-dewy romance gratifyingly dissonant.

It's been 18 years since they talked through the night that first time, Julie Delpy's Celine enchanting and occasionally prickly, Ethan Hawke's Jesse determined to charm; their chatter then, as now, scripted but loose enough to feel improvised as captured in long, long takes by Richard Linklater's cameras.

Take a peek back at 1995's Before Sunrise, and you'll be reminded of how effortless it all seemed at the outset: a daylong meet-cute flirtation begun on a train and continuing in Vienna, with relationship logistics impossible enough that French gamine and American shlub (and so young!) felt free to invent, embellish, overstate and preen while simultaneously letting down their guards, knowing nothing would ever come of the encounter.

Before Sunset (2004) caught up with them in Paris after a long separation, nine years and some seemingly incontrovertible life choices later. The conversation that time was tinged with regret, longing and — at the tail end — a faint glimmer of hope.

Now another nine years have passed, this time years spent together rather than apart, and the heady buzz of romance has given way to a steadier, less urgent throb. Commitment, is it? Though not married, they're raising twin girls (presumably conceived shortly after we last saw them), and what's quickly apparent from the rhythms and flow of their chatter is that parenthood hasn't changed them.

Before Midnight begins at the tail end of a family vacation in Greece, with Jesse stumbling through an awkward airport farewell. His 14-year-old son is heading home to Chicago and his mom, leaving Jesse in a funk as he drives with Celine (and the girls, asleep in the back seat) to a friend's villa. There, they'll do something we've not really seen them do before — interact with others — in a long luncheon conversation with their hosts that brushes in some exposition about the nine years we've missed. (And that suggests Linklater has been watching a lot of Eric Rohmer.)

Then the two get away by themselves and get back to the discursive, meandering, hyperarticulate and wildly verbose noodling that makes these movies such welcome rarities at the cineplex. Delpy and Hawke workshopped the dialogue with Linklater, and if the result rarely sounds entirely offhand, it does sound heartfelt enough that you may wonder whether bits of their own lives crept into the mix.

Whatever — they're older if not necessarily wiser, more practical, less ardent, more weighed down by life, so it shouldn't be surprising that their conversation would have a sharper, less wistful edge this time, with Jesse brooding about not being a bigger part of his son's life, Celine fretting over her job.

Still, nothing about their sparring prepares them (or us) for the turn things take when they check into a hotel for some away-from-the-kids, shake-out-the-cobwebs sex, only to have the sun take civility with it as it sinks below the horizon. It's as if the weight of 18 years has descended on the couple's Bach-like duologues, inflecting them abruptly with the Wagnerian and putting at risk a partnership that — though we've spent just a few hours with them across two decades — we've been fully prepared to declare rock-solid.

As Linklater exchanges sunny Greek vistas for the artificial light and bland, tight confines of a hotel suite, you'll note the creases that time has etched into the actors' faces, and register how earned the pain seems in their eyes. Delpy and Hawke have never been more persuasive. Nor has the series. (Recommended)