Accessibility links
Stephen King, Author Of 'Joyland': On Growing Up, Believing In God And Getting Scared "The more carny it got, the better I liked it," King says of his new thriller, Joyland. The book, set in a North Carolina amusement park in 1973, is part horror novel and part supernatural thriller. King talks with Fresh Air's Terry Gross about his career writing horror, and about what scares him now. 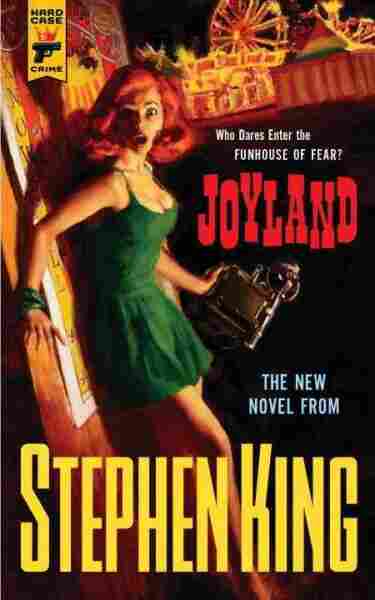 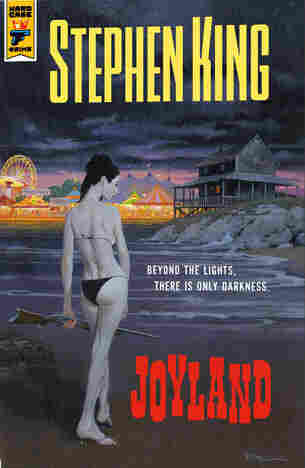 King's publisher Hard Case Crime features splashy covers that harken back to the era of old pulp fiction paperbacks. Above is one of the two covers designed for Joyland. Hard Case Crime hide caption 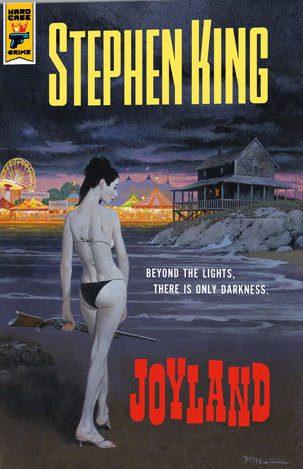 King's publisher Hard Case Crime features splashy covers that harken back to the era of old pulp fiction paperbacks. Above is one of the two covers designed for Joyland.

For 20 years, Stephen King has had an image stuck in his head: It's a boy in a wheelchair flying a kite on a beach. "It wanted to be a story, but it wasn't a story," he tells Fresh Air's Terry Gross. But little by little, the story took shape around the image — and focused on an amusement park called "Joyland" located just a little farther down the beach.

King's new thriller is set in North Carolina in 1973. Joyland has a horror house and a torture chamber, but it's not exactly a horror novel. The park's fun house may be haunted by a ghost — which may explain the dead bodies — but the book isn't exactly a supernatural thriller, either. Instead, the book combines elements of crime, horror and the supernatural. The main character is a college student who aspires to write for The New Yorker. After his heart is broken by his girlfriend, he wants to get away from New England and takes a job in North Carolina, at the Joyland amusement park, where he enters a different world.

As King — who is also the author of such horror, mystery and crime classics as Carrie, The Shining and It — began writing the book, the amusement park atmosphere he began with turned more lurid, more "carny," more influenced by the state fairs and local carnivals of his youth in rural Maine.

"The more carny it got, the better I liked it, actually," he says, "and I started to go to websites that had various carny language, some of which I remembered a little: pitchmen called 'shy bosses' and their concessions called 'shies,' and the little places where they sold tickets and sometimes sat down to rest called 'doghouses,' and other stuff I just made up, like calling pretty girls 'points.' "

It was his childhood, too, that influenced his decision to go with Hard Case Crime as his publisher. Hard Case Crime publishes new hard-boiled crime novels as well as lost ones from the past, all with original covers in the style of old pulp fiction paperbacks.

"Hard Case Crime is a throwback to the books that I loved as a kid," King says. "We lived way out in the country, and my mother would go once a week shopping, and she would go to the Red & White or the A&P to pick up her groceries. And I would immediately beat feet to Robert's Drugstore, where they had a couple of those turn-around wire racks with the hard-boiled paperbacks that usually featured a girl with scanty clothing on the front. ... The teaser line that I always loved the most was for a novel called Liz where it said, 'She hit the gutter and bounced lower.' ... I loved that, and the one on the front of Joyland says" — he lowers his voice — " 'Who dares enter the funhouse of fear?' "

On the connection between carnival workers and televangelists

"It isn't overt in the book, but, sure, I think that we have a lot of carny aspects to life in America — everything from television and the movies to our religion. And we can see from the megachurches that — my goodness, Terry — people love a show. You can have a nice Methodist church somewhere in Oak Park, Ill., if you want it. People are going to come and they're going to sit there and the organ's going to play and that's all terrific, but what I want is down in the 'amen' corner, Jesus jumping. I want that big choir with the people swaying from side to side, 'Ooooh, God,' and I want the electric guitar. Then I want the preacher where the guy's going to walk back and forth and not just stand like a stick behind the pulpit. He's going to, you know, shake his fist a little bit in the air and then he's going to smile and throw his hands up and say, 'God's good! God's great! Can you give me hallelujah?' I just adore that. And it's really only about two steps from the carny pitchman, because I like that, too." 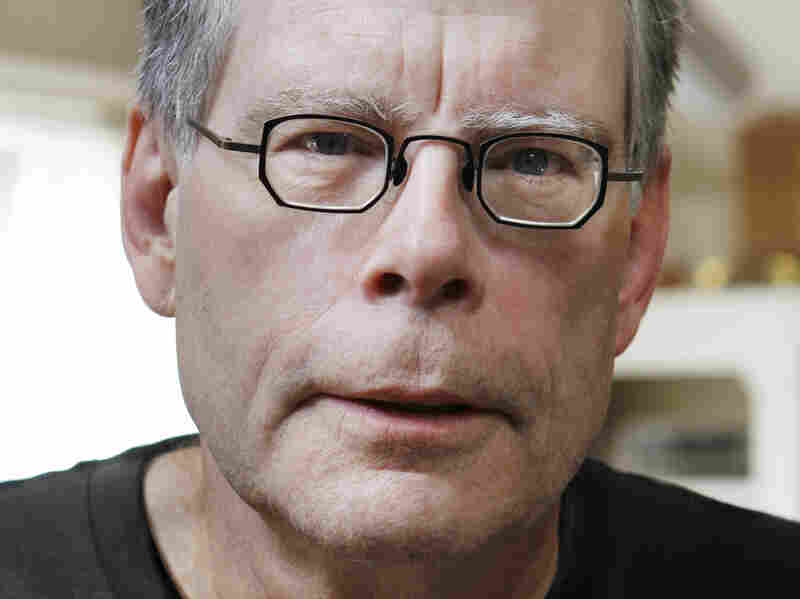 A native of Maine, Stephen King has used the state as the backdrop for many of his novels and short stories. In Joyland, however, he sets his scene in North Carolina. Shane Leonard/Hard Case Crime hide caption

"I choose to believe it. ... I mean, there's no downside to that. If you say, 'Well, OK, I don't believe in God. There's no evidence of God,' then you're missing the stars in the sky and you're missing the sunrises and sunsets and you're missing the fact that bees pollinate all these crops and keep us alive and the way that everything seems to work together. Everything is sort of built in a way that to me suggests intelligent design. But, at the same time, there's a lot of things in life where you say to yourself, 'Well, if this is God's plan, it's very peculiar,' and you have to wonder about that guy's personality — the big guy's personality. And the thing is — I may have told you last time that I believe in God — what I'm saying now is I choose to believe in God, but I have serious doubts and I refuse to be pinned down to something that I said 10 or 12 years ago. I'm totally inconsistent."

At some point a lot of interviewers just turn into Dr. Freud and put me on the couch and say, 'What was your childhood like?'

On whether he was interested in the supernatural as a child

"At some point a lot of interviewers just turn into Dr. Freud and put me on the couch and say, 'What was your childhood like?' And I say various things and I confabulate a little bit and kind of dance around the question as best I can, but bottom line: My childhood was pretty ordinary, except from a very early age I wanted to be scared. I just did. I was scared afterward. I wanted a light on because I was scared. There was something in the closet. My imagination was very active even at a young age. For instance, there was a radio program at the time called Dimension X, and my mother didn't want me to listen to that because she felt it was too scary for me, so I would creep out of bed and go to the bedroom door and crack it open. And she loved it, so apparently I got it from her, but I would listen at the door and then when the program was over I'd go back to bed and quake."

On what scares him now

"It's been quite awhile since I was really afraid that there was a boogeyman in my closet, although I am still very careful to keep my feet under the covers when I go to sleep, because the covers are magic and if your feet are covered, it's like boogeyman kryptonite. And I'm not as afraid of that as I used to be. The supernatural stuff doesn't get to me anymore.

"So here's the movie that scared me the most in the last 12 or 13 years: The movie opens with a woman in late middle age, sitting at a table and writing a story, and the story goes something like, 'Then the branches creaked in the ...' and she stops and she says to her husband, 'What are those things? I can't think of them. They're in the backyard and they're very tall and birds land on the branches.' And he says, 'Why, Iris, those are trees,' and she says, 'Yes, how silly of me,' and she writes the word and the movie starts. And that's Iris Murdoch and she's suffering the onset of Alzheimer's disease. That's the boogeyman in the closet now. ... I'm afraid of losing my mind."

On whether his writing changed after being hit by a car and becoming addicted to OxyContin, a habit he has since kicked

"When I said that I wasn't going to write or when I was going to retire, I was doing a lot of OxyContin for pain. And I was still having a lot of pain and it's a depressive drug anyway, and I was kind of a depressed human being because the therapy was painful. The recovery was slow and the whole thing just seemed like too much work, and I thought, 'Well, I'll concentrate on getting better and I probably won't want to write anymore.' But as health and vitality came back, the urge to write came back.

"But here's the thing: I'm on the inside and I'm not the best person to ask if my writing changed after that accident. I don't really know the answer to that. I do know that ... was close, that was really being close to stepping out. The accident, and a couple years later I had double pneumonia and that was close to stepping out of this life as well, and I think you have a couple of close brushes with death like that, it probably has [an effect]. Somebody said, 'The prospect of imminent death has a wonderful clarifying effect on the mind,' and I don't know if that's true, but I do think it causes some changes, some evolution in the way a person works, but on a day-by-day basis I just still enjoy doing what I'm doing."

Read an excerpt of Joyland