Accessibility links
Navajo Schools Lose Funding Due To Sequestration Cuts Indian reservations don't collect state property taxes, meaning most of their education budget comes directly from the federal government. With graduation rates already low, administrators worry about what larger class sizes and fewer school buses will do to the community. 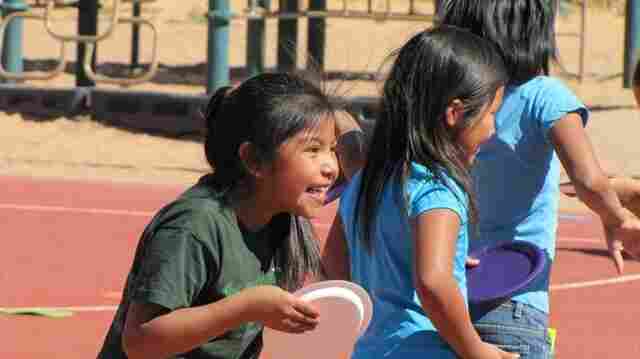 An elementary school student enjoys Field Day on a playground. Harold Begay, superintendent of the Tuba City Unified School District in Arizona, says the repairs that are needed to playground equipment, school buildings and buses would not be allowed anywhere else. Laurel Morales/KJZZ hide caption 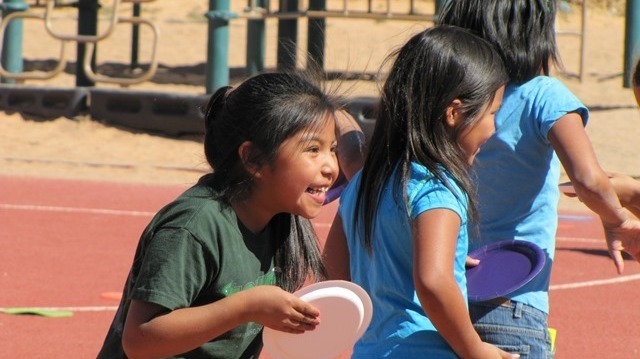 An elementary school student enjoys Field Day on a playground. Harold Begay, superintendent of the Tuba City Unified School District in Arizona, says the repairs that are needed to playground equipment, school buildings and buses would not be allowed anywhere else.

When Congress enacted the across-the board budget cuts known as the sequester in March, they cut $60 million for American Indian schools across the country.

Navajo children travel up to 70 miles to get to school. Many of them ride small school buses over roads that look like off-road trails for weekend warriors.

Orson Brigman drives six miles over sand dunes every day to pick up students. All of the drivers complain of back problems. And you can imagine what those bumps do to the buses, literally shaking the screws lose.

Brigman says a bus that should last the district 10 years lasts five. The district is not sure if it will have the money to buy a new one next year.

High school principal Sharlene Navaho says her school has seven open positions due to attrition, but sequestration means she will have to leave those vacant next year. Teachers say in addition to larger class sizes, they will have to buy scissors, crayons and other supplies themselves.

At the Tuba High School gym in Flagstaff, Ariz., you can see sun shining through the holes in the ceiling. The nearby primary school is also in desperate need of repair. Part of the building, including the cafeteria, has been condemned and it is lacking new bathrooms and safe playground equipment. Those upgrades will have to wait.

"When you have an unreliable revenue flow always being underfunded to say that it hurts morale is putting it mildly," Begay says.

Seventy percent of students in his district graduate, but Begay says many of them are not prepared to compete in the outside world. He's working hard to change the whole community's low expectations — something especially hard to do with less federal funding.

This report was done in collaboration with Fronteras: The Changing America Desk, a public radio reporting project that focuses on the changing demographics in the American Southwest.