Accessibility links
Midcentury Furniture + Grandkid Nostalgia = Modern Trend It first showed up in the 1950s and '60s — think low-slung sofas, egg-shaped chairs and the set of Mad Men. Today, midcentury modern furniture is "blazing hot," as one dealer puts it. One explanation is that people often like what their grandparents liked. 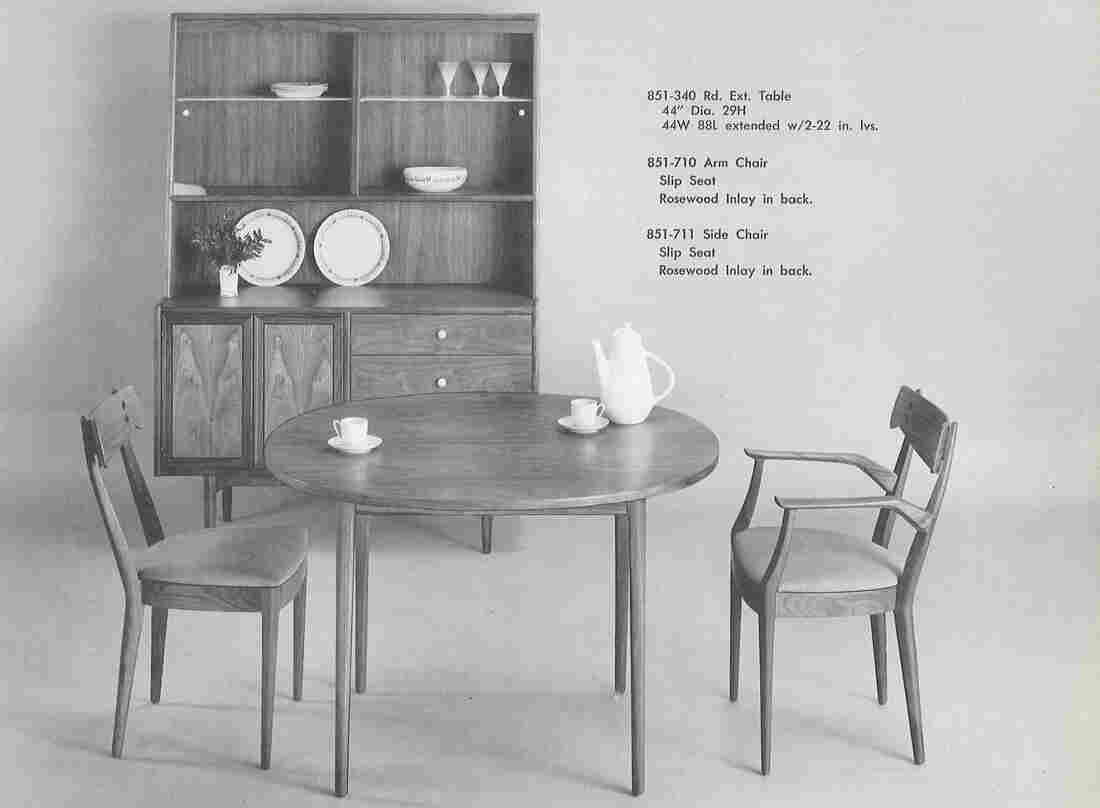 NPR's Andrea Hsu paid $75 for her midcentury modern table and chairs, shown here in a 1963 Drexel Declaration catalog. She quickly realized it was a steal. Courtesy Drexel Heritage hide caption 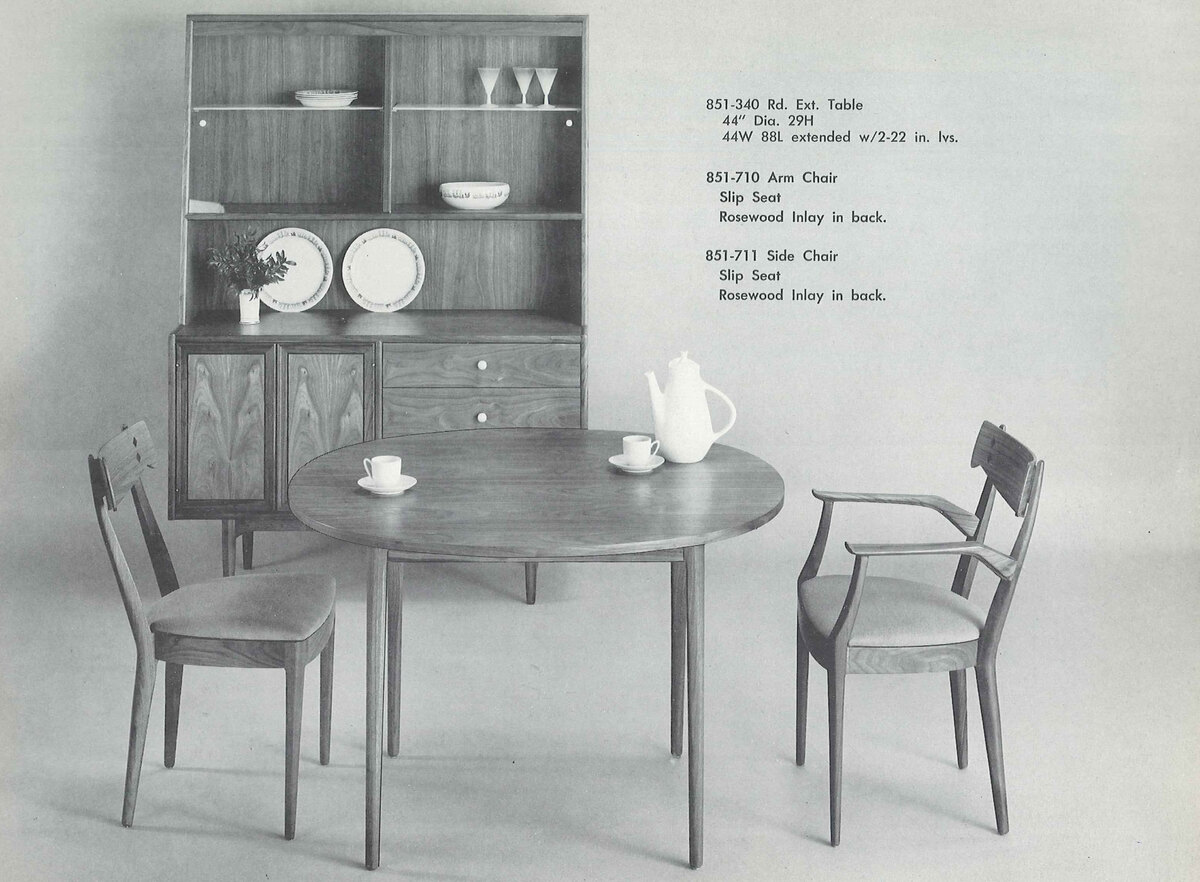 NPR's Andrea Hsu paid $75 for her midcentury modern table and chairs, shown here in a 1963 Drexel Declaration catalog. She quickly realized it was a steal.

Open a design magazine or turn on a home decorating show these days, and it's clear: Midcentury modern is hot. It first showed up in the 1950s and '60s — think low-slung sofas, egg-shaped chairs and the set of Mad Men. My first midcentury modern find was a dining set I bought on Craigslist for $75. There was something about the clean lines and gentle curves of the wooden chairs that got me. I saw the name Drexel Declaration stamped under the table, Googled it and found a world of people in love with 60-year-old furniture.

I quickly realized $75 was a steal.

"It's blazing hot. It really is," says Eddy Whitely, a midcentury modern furniture dealer in Baltimore. "People that are into it are into it."

So who are those people? Let's start with who they aren't: baby boomers. According to Stacey Greer, Whitely's business partner, "They just don't want to look at it anymore, they want something different. They grew up with it and their parents had bought it, so they want anything but that. It's definitely more of a younger, urban look."

Martina Alhbrandt loves finding and fixing up vintage pieces, things her parents would call dated or tacky. She's drawn to the simplicity of midcentury design. (She even keeps a blog called My Mid-Century Modern Life.) She describes the style as "clean and functional" and says it reminds her of the values of her grandparents' generation.

"My grandparents were very frugal," Alhbrandt says. "They worked hard and they bought things with cash. And if something were to break, like the drawer of a dresser were to break, they would fix it. They wouldn't just throw it away and go to Wal-Mart and buy a new one."

According to Bobbye Tigerman, a curator of design at the Los Angeles County Museum of Art, nostalgia is a big part of what's driving the trend. "People tend to like what their grandparents liked and reject the taste of their parents," she says.

Out Of This World: Designs Of The Space Age

That same thing happened with art deco a generation earlier. "In the late 1960s, art deco became very popular," Tigerman says. "And the term was actually coined in the '60s; it was not a term used in the 1920s."

Similarly, back in the '50s, no one was talking about "midcentury modern" — not even the people who were there creating it.

I tracked down Stewart MacDougall and Kipp Stewart, who designed my dining set. They're both well into their 80s and living in California. I was curious to know what they think of today's midcentury modern craze. It turns out, MacDougall has also been shopping. He's been visiting a site called 1stdibs because it sometimes lists his designs.

He says he's bought a few pieces just for fun, but he's not sure why other people would want them. Finally, he settles on this explanation: "I think there is a huge market for nicely designed things."

When I tell Stewart, his design partner, that I see Drexel Declaration all over design blogs and in magazines, Stewart looks at me puzzled. "Really?" he asks. "Maybe because there's so much of it. It's just available."

Stewart may be onto something: After World War II, home ownership surged. People who bought homes in the 1950s and '60s would now be in their 70s and 80s. Many no longer want or need houses full of furniture.

Whitely, the Baltimore dealer, says it hits him when he's driving through neighborhoods. "I just look at block after block after block of houses. There's a sofa in every single one of them; there are dining room chairs. So think about it, just the sheer numbers of furniture."

That means there are still plenty of chances to find the perfect midcentury modern piece — and, if you're lucky, at the perfect price.