Accessibility links
Movie Review: 'The East,' Directed By Zal Batmanglij In this slightly batty new thriller, rising star Brit Marling plays a former FBI agent infiltrating an anarchist group. Will she give up her corporate ways? Will the eco-terrorists be able to eat their vegan meals while straitjacketed? Watch and see. 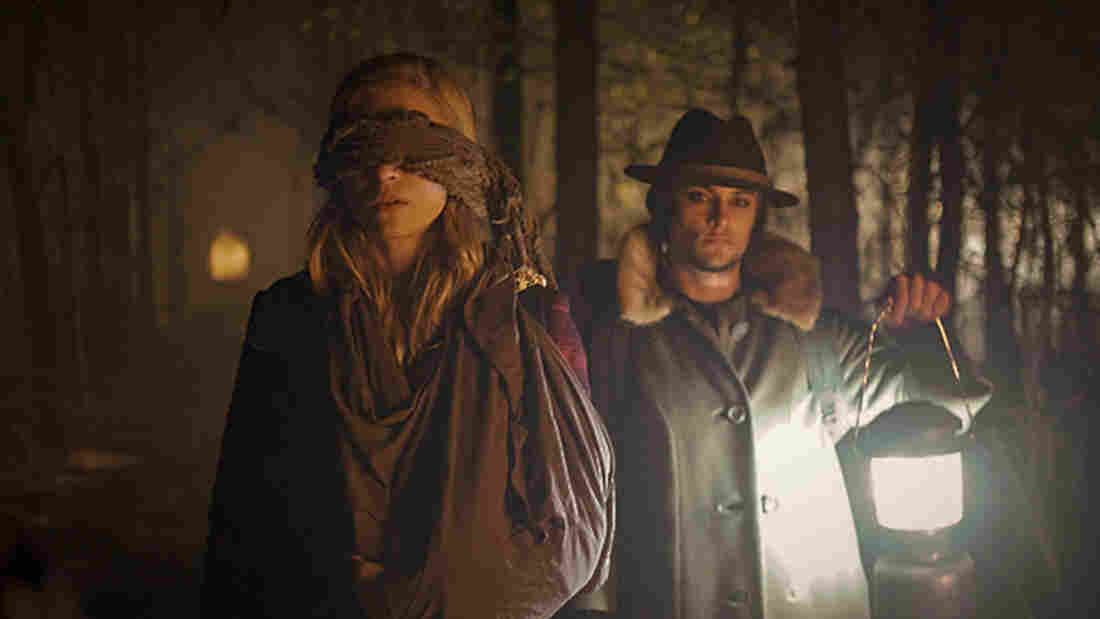 In The East, a slightly batty, weirdly involving new thriller about corporate espionage and eco-terrorism, rising star Brit Marling (last seen as Richard Gere's daughter in the drama Arbitrage) plays Sarah, an ambitious young private intelligence operative and former FBI agent. You'd think the film might explore the conflict of interest in that career move, but it seems we now take it as read that one spying hand washes the other without consequence.

Sarah's boss (Patricia Clarkson, channeling Meryl Streep in virago mode) orders her to infiltrate an anarchist group dedicated to attacking drug companies that unleash substandard products on an unsuspecting public, reaping huge profits. Dropping in and out of the cult-like group — which calls itself The East and plots "jams" that seek to poison CEOs with their own medicine — Sarah goes a little bit native, then a lot more, growing increasingly confused about where her allegiances lie.

As she commutes between this raggedy utopia and the gleaming boardrooms of her workplace, Sarah finds herself both drawn to and repelled by the group's charismatic leader Benji (a hollow-eyed, Christlike Alexander Skarsgard) and his lieutenant Izzy (Ellen Page), a spiky trust-funder who nudges the group into ever more violent acts of vengeance. In the loyalty of the group's members — predictably, a nebbishy lot fleeing from their own troubles — Sarah finds the spiritual nourishment missing from her straight life.

I mean, who wouldn't choose riding the rails, dumpster diving and plotting societal overthrow in stinking basements to a life filled with career mobility, creature comforts and the world's most understanding husband?

Living Multiple Outcomes: Brit Marling Is A Hyphenate On 'Another Earth'

Marling, who co-wrote The East with director Zal Batmanglij, hung out with anarchist collectives before they started shooting, so for all I know the outlandish practices of the group are based on meticulous research. But it defies belief that a bright spark like Sarah would consider throwing in her lot with a crew of no-hopers like these, whose idea of collective morale-building entails chaste rounds of spin the bottle, ritual exchanges of soft little kisses, and eating vegan dinners in straitjackets to complicate mutual feeding.

Batmanglij, who also collaborated with Marling in the Sundance hit Sound of My Voice, deftly juggles the grime and glamour at the bookends of a rapidly polarizing society. The East makes for a passable thriller, as 1 percenters get theirs in satisfying, if incrementally implausible ways. Less credibly still, Sarah doesn't see a climactic twist coming though it's been blaring danger almost from the get-go.

Of greater interest are the metaphysical threads picked up from the Sound of My Voice and the crazy-beautiful 2011 sci-fi drama Another Earth, which Marling co-wrote with director Mike Cahill. She and her two directors went to college together, and though The East is less inventively fanciful and marred by moral banality ("If we hurt people, aren't we as bad as they are?"), all three movies speak poignantly for a post-millennial generation searching for community, for someone or something to trust with their faith in a spiritually arid consumer age crafted by their parents.

Warped by inattention and rotten values, even — perhaps especially — the children of the 1 percent convert their resentment into rage. If...., anyone?