Hey, Monkey See readers. It's me, your old pal Glen. Look, I know you haven't seen me around these parts very much over the last year or so, but ...

Anyway, the reason I haven't been blogging about comics in this space every week is that I was, you know, writing a book. A cultural history of Superman, in point of fact, in time for the character's 75th birthday. A book that, if you'll pardon a bit of unseemly auto-horn-tootlage, has just been published, and has been getting reviewed well, if not widely.

I have gotten to do some interviews and writing about the book, here and there, and in those I give the book's précis, and talk about why I think the character has endured, and how though he's widely regarded as inherently boring/staid/too powerful/not relatable/out-of-step, he's actually changed a great deal over his 75 years of existence. I talk about how the changes he's undergone directly reflect the cultural shifts that have taken place over the past eight decades of American life. And how he's not the hero we relate to, he's the hero we believe in. And ... lots of other stuff about the ideal he represents, the optimistic future he embodies, all of which I fervently believe.

But you and me, we know each other. We go back. We get each other. So here, I can put aside the chin-rubbing a bit, and get to some Real Talk.

Okay, real talk? Just between us? My favorite Superman story of all time isn't a Superman story. Guy doesn't even show up until the last page or so. But it belongs to an era of Superman stories that I love earnestly, openly and without irony. A time that historians dryly denote the Silver Age, but which you and I – real talk! — shall refer to as The Crazypants Years.

While the George Reeves television show The Adventures of Superman was on the air (1952-1958), the folks in charge decreed that his comics adventures must be seen as extensions of his televised exploits. That meant they had to conform to the show's comparatively narrow scope and effects budget. Thus the comic book Superman, the most powerful being in the known universe, ended up hanging around Metropolis most of the time and nabbing the odd jewel thief like a beat cop in blue L'eggs.

Once the show ended, however, all bets were off, and writers and artists were free to get weird. Crazypants-level weird. And under the firm editorial hand of Mort Weisinger, who encouraged his writers to surround the Man of Steel with a vast and quirky network of friends and relations (Girl cousin! Super dog! Mermaid ex! Super-powered teen pals from the future! Super monkey! Super horse who is a centaur who is also a guy never mind why! Super cat! Dead Kryptonian fiancée he met when he went back in time! Tiny bottled Kryptonian municipality!) Superman became the harried, bemused patriarch of a garishly colored clan that routinely traversed the galaxy and the timestream as if they were just running out to the Piggly-Wiggly.

Here's why I love this era of comics, specifically Superman comics, so much: It was a time when writers and artists embraced what they were doing with an unself-conscious and profoundly imaginative glee. Characters were big, and their stories were even bigger, bolder, brighter – they engaged the primal emotions of early childhood, and employed the kind of blunt, implacable kid-logic that evaporates upon reflection.

Which is to say: These stories succeed at doing what superhero comics were created to do. They are fun.

And of all the characters of The Crazypants Years, the one who had the most fun, who got the weirdest on the regular, was Jimmy Olsen.

In any given issue of Superman's Pal, Jimmy Olsen, you could count on Jimmy to get transformed into a giant-headed mutant or werewolf or Turtle-Man. Or, in the case of my favorite story ever, get stranded in Ancient Judea, become a sheep-shearer, pal around with a Biblical character or two, and, in his spare time, start a Beatles craze. You know: THAT old plot.

I love this story – written by Leo Dorfman and illustrated by George Papp for the September 1964 issue of Superman's Pal, Jimmy Olsen #79 – because it is dutifully crazy, embodying the go-for-broke tenor of this era's comics. But I also love it because it marks a shift in how Superman's writers and editors thought of their audience, and of themselves.

For years, they'd written for kids. That, they knew how to do. But now, suddenly, the newsmagazines were talking about something called "youth culture."

What in God's name was that? And what were they to do about it? 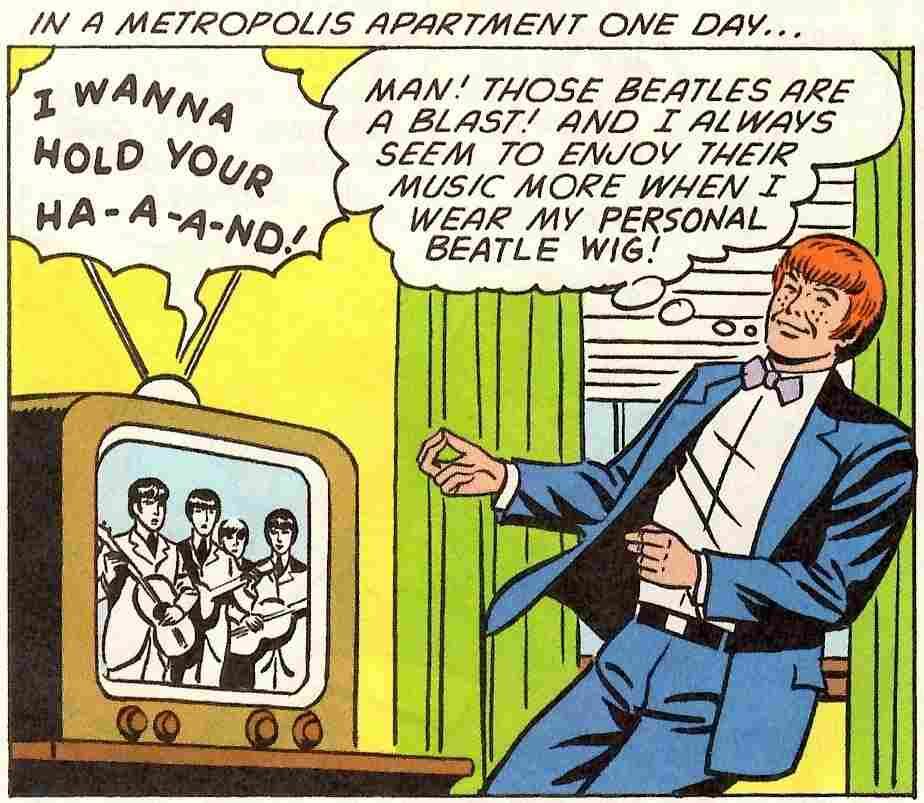 Enlarge this image
From the Author's Collection 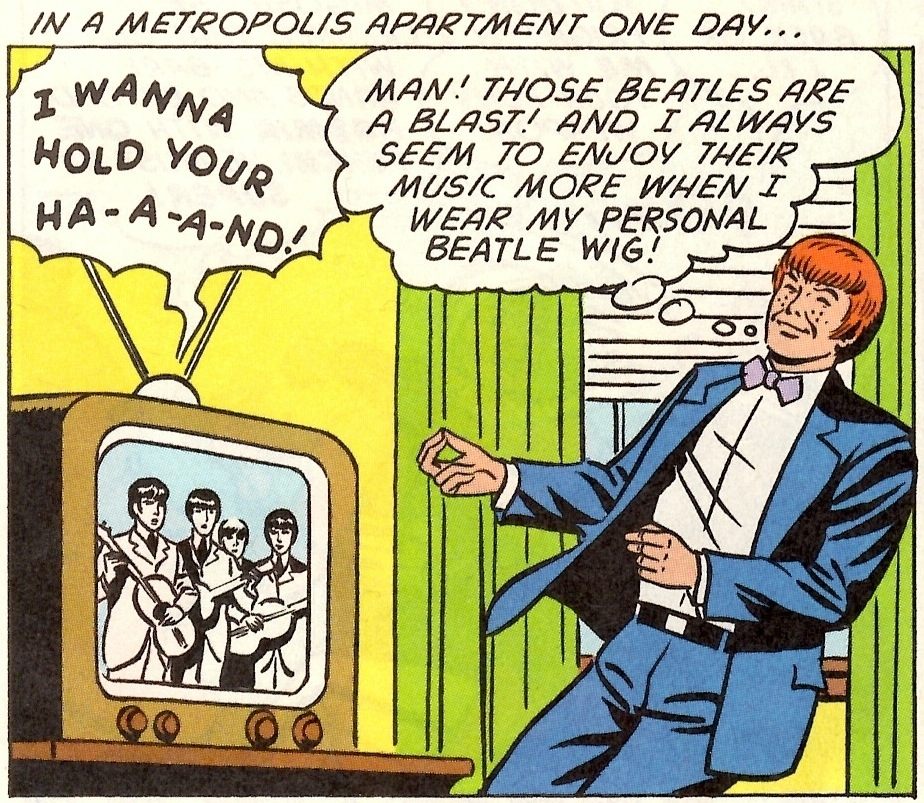 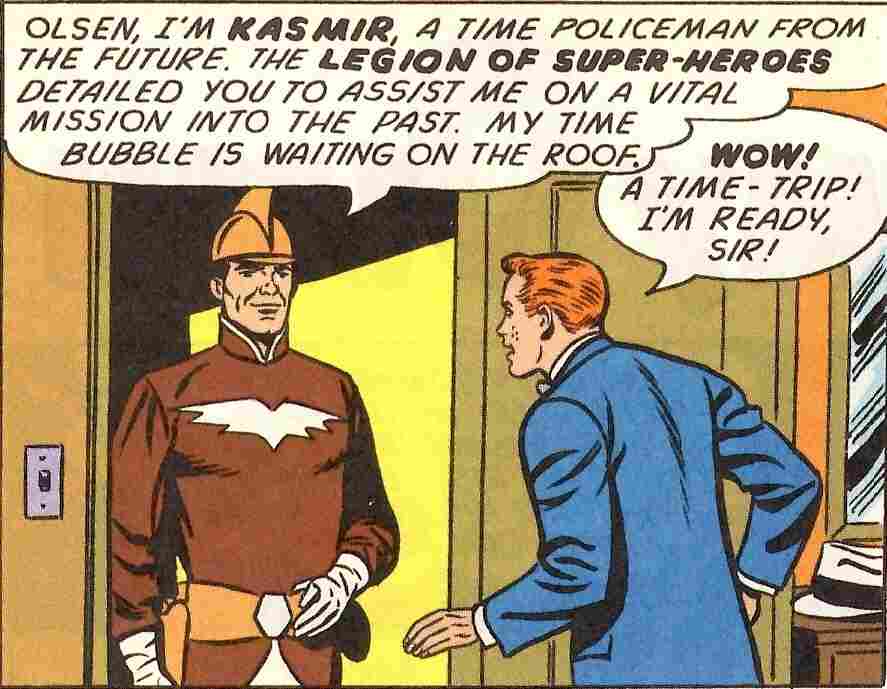 What's this? A visitor! With a fin on his head, so clearly he must be from the future! Loyal Jimmy springs into action! Loyal, Credulous, Why-No-Sinister-Looking-Fin-Headed-Officer-Of-Course-I-Don't-Need-To-See-Your-I.D., action! 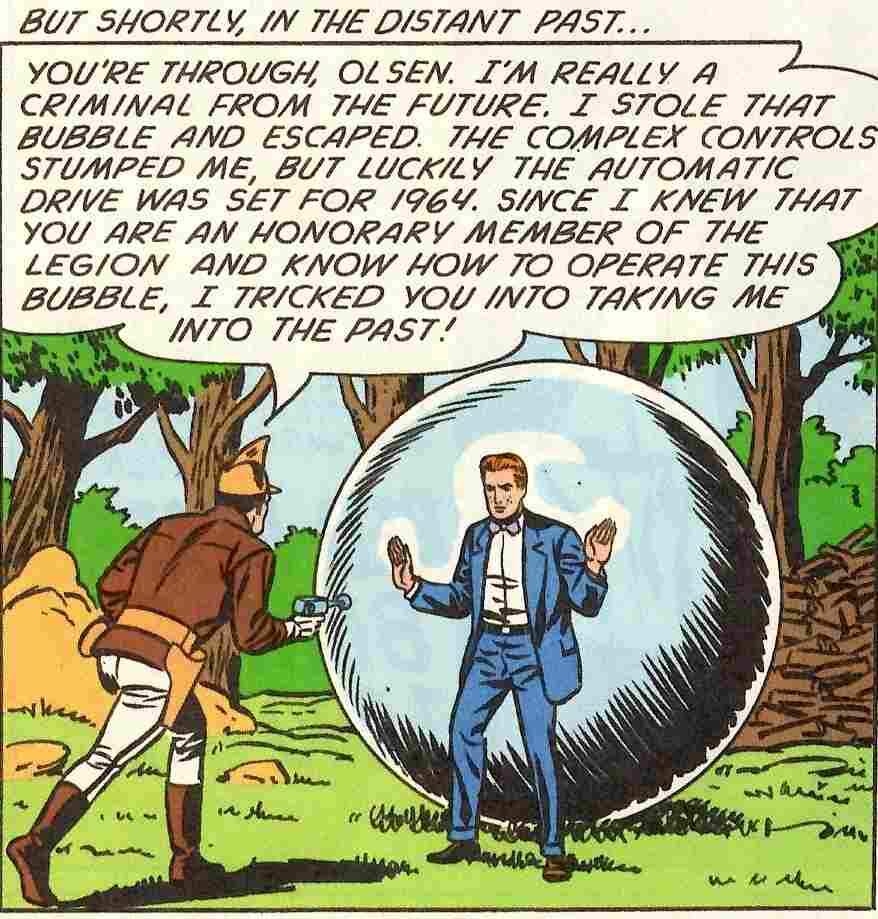 Oh no! A twist! Officer Fin-Head is not an officer at all, but a criminal from the future! We know, because he tells us so. And more. I'm sparing you the panels wherein he describes in painstaking detail the particulars of his insidious transchronological scheme. Kind of a Chatty Cathy, this Kasmir. A Chatty Cathy ... OF THE FUTURE!

Jimmy's life is saved by a mysterious mighty youth who calls himself ... um, Mighty Youth. Evil Kasmir scampers off, but not before destroying the time-bubble, ensuring that both he and Jimmy are stranded in Ancient Judea.

Mighty Youth encourages his new pal Jimmy to get a job, already. But alas, Jimmy's skill-set (getting kidnapped, stumbling into danger, getting turned into things rather a lot) is ill-suited to the time and place. But Jimmy is ever-resourceful, and decides that, if he can't cub-report, he can at least sheep-shear.

Alas! A busy day of sheap-shearing nets our Jimmy only two copper pieces! Not enough to keep Jimmy in the style of dancing-alone-in-one's-bachelor-pad to which he's grown accustomed. Luckily, upon glimpsing some of the blond-haired, blue-eyed moppets teeming around Ancient Judea (never mind, never mind), he is struck by an idea. 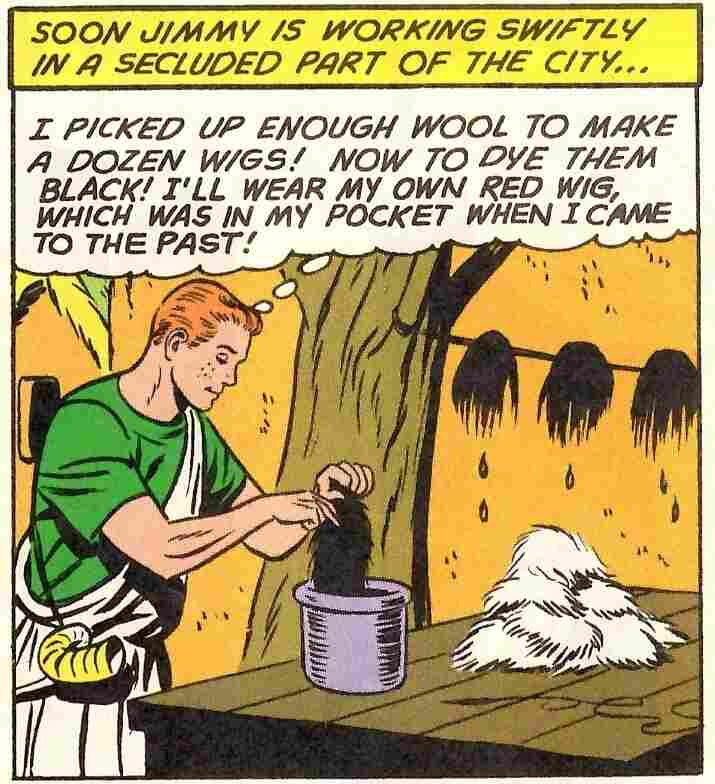 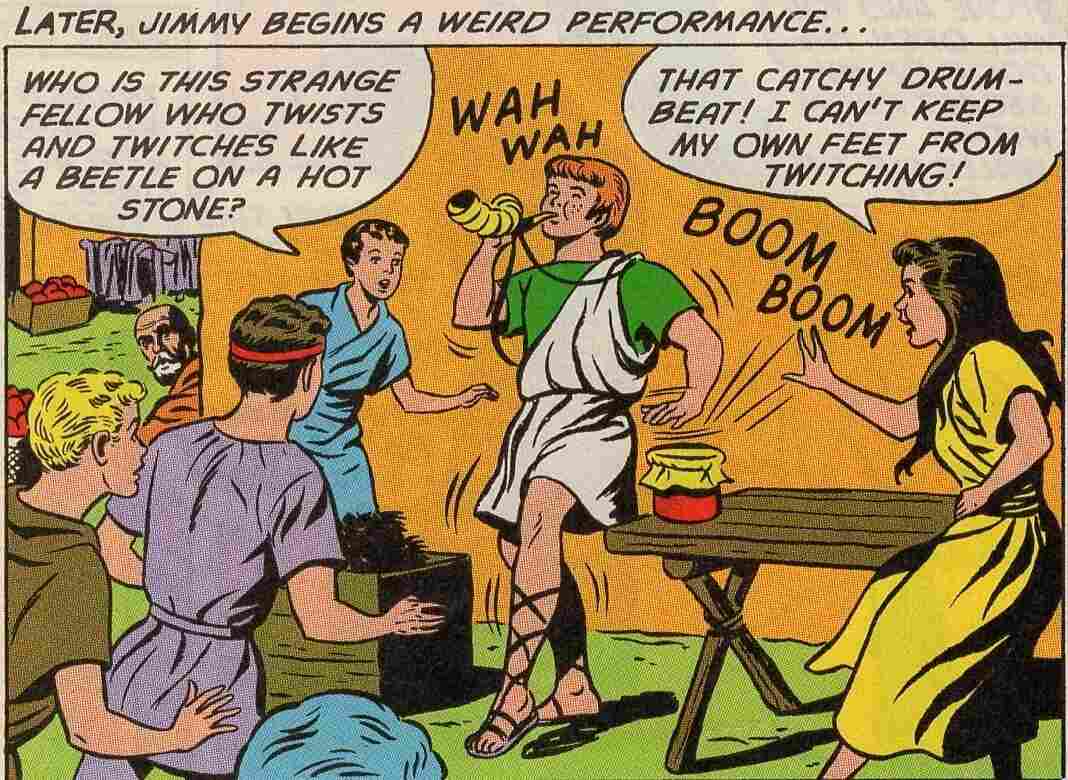 See what they did there? "Like a beetle on a hot stone?" Hanh? You didn't miss it, did you? What they were doing there? 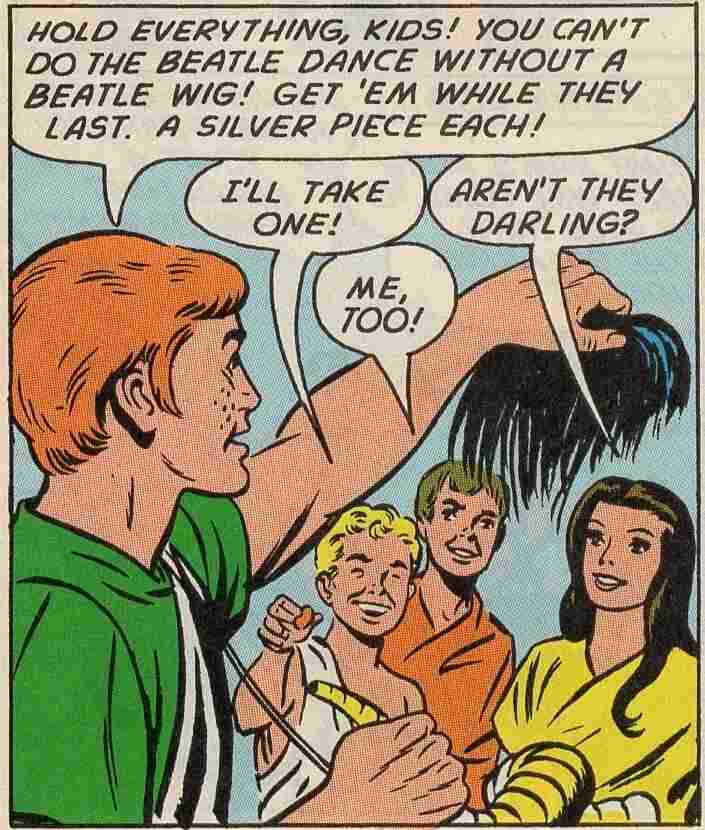 Step right up, step right up! Let's get LiverPUDlian, up in this piece!

"I say, Smythe, we've discovered some rather interesting footwear in the Judean ruins, dating back to 1000 B.C.! Look! Have you ever seen their like?" 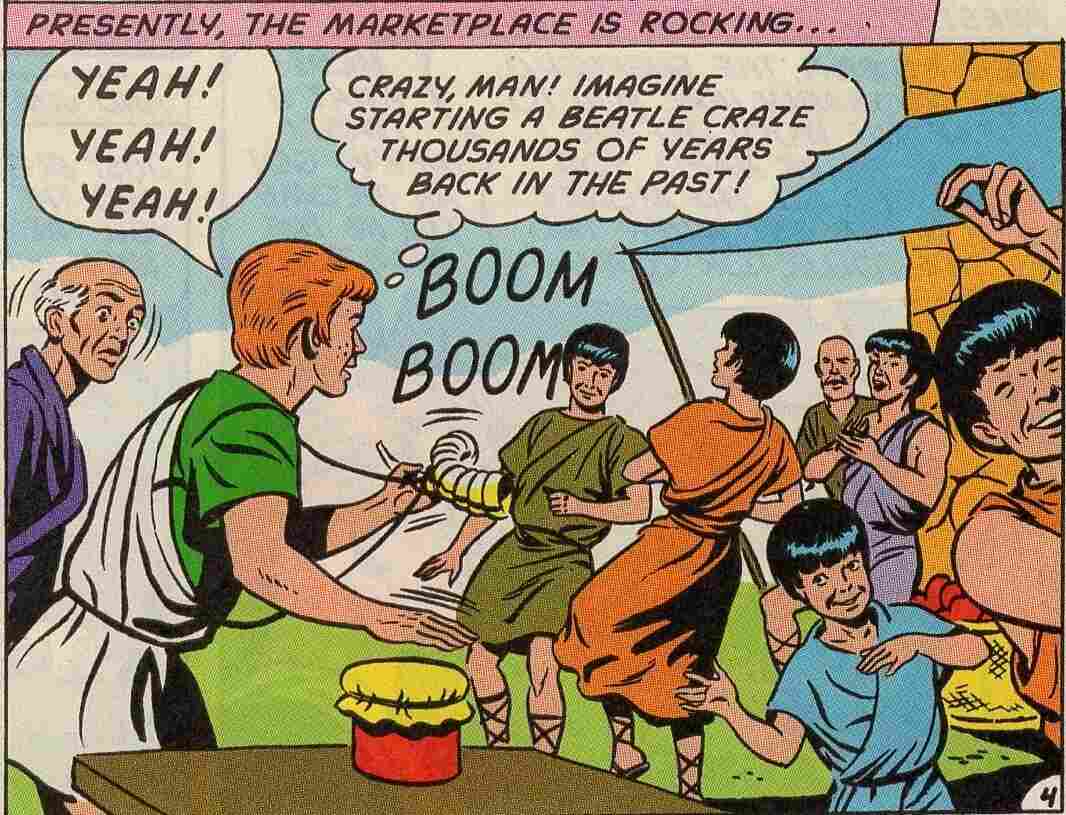 "YEAH YEAH YEAH! Imagine doing the very thing I am doing! What a wacky turn of events has taken place, that I have had a hand in making come to pass, inasmuch as I caused them to happen! I am showing AND telling!"

Before we know it, Jimmy is locked up for illegally selling the shepherd's surplus wool and not cutting him in on the extra shekels. Horrors! Fresh-faced Jimmy won't last a day in a Jericho jail! Luckily the screws didn't take his Mighty Youth Signal Shofar. Best not to dwell on how he managed to smuggle it in with him, but he uses it to call for help: "PWAAH! OOWAH!" PWAAH! OOWAH!, indeed, Mr. Olsen.

Mighty Youth arrives to save the day.

Our story so far: Jimmy Olsen has been interrupted while grooving out to the Fab Four by a cop from the future who is really a criminal from the future, narrowly escaped from said criminal by meeting and befriending an ancient superhero, found himself stranded in the distant past, happened upon gainful employment as a sheep-shearer which turned out not to be so gainful, seized upon a scheme to make more money through the manufacture and sale of bootleg music paraphernalia, started a youth fad using only a ram's horn, a drum and his dance skills, got thrown in jail for embezzlement, and gotten himself rescued.

If this story were written today, we'd still be in Jimmy's apartment. He probably wouldn't have even gotten around to putting on the damn Beatle wig yet.

There's more to the story, in the remaining handful of pages. We learn that Mighty Youth is secretly ... Samson.

Years before his depilatory dalliance with Delilah, admittedly, but: Samson. Because, sure he is. Kasmir returns and steals into Samson's secret superhero HQ in the dead of night to cut the hero's hair and render him powerless. But ever-resourceful Jimmy ... well, better I let him explain: 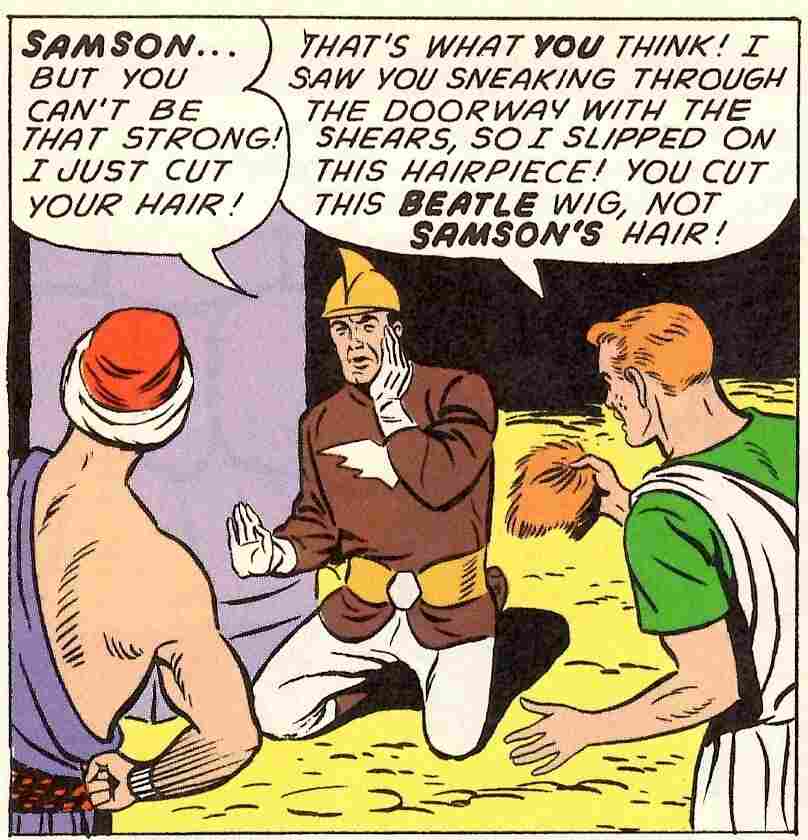 THERE we go. Couldn't be simpler. As a result, Kasmir is captured, and Superman arrives to rescue Jimmy, but not before Jimmy gives a farewell performance in the marketplace – which the inexplicably Nordic kids of ancient Jericho will come to regard as his Apple Records rooftop. 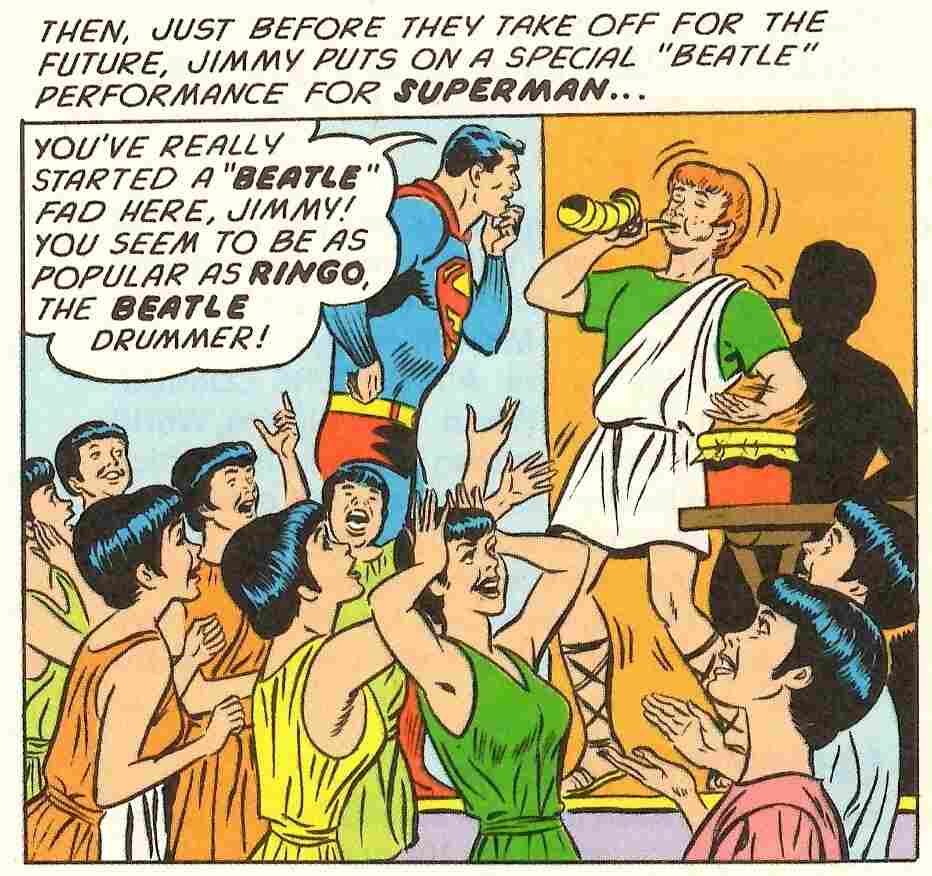 And there, by his side, is his pal Superman, managing to sound like everyone's cringeworthy, desperate-to-be-hip, "So, what're kids turning on to, these days?" uncle.

Which is why this story stands out to me. Because just a few blocks away, Marvel Comics had adopted a radically different approach to courting the growing "youth culture." They did so with a raft of new characters who embodied it – superheroes beset by feelings of alienation and inadequacy, anti-heroes who chafed against the status quo and challenged it at every opportunity.

Superman's writers and editors, however, were content to invoke youth culture with cornball references ("Ringo! The BEATLE drummer!") to the music Those Crazy Kids liked, while preserving Superman as a hero dedicated to notions of Truth and Justice – two concepts which were about to come in for a thorough shellacking in the latter half of the 1960s.

Thus readers were faced with a choice: Marvel heroes were rebels without a cause. Superman and DC Comics offered a cause without rebelliousness.

They chose. By the time the 60s came to a close, Marvel succeeded in knocking Superman off the top of the sales charts.

There have been better Superman stories, of course. Stories that capture the Sisyphean core of the character, or that embrace his status as a powerful symbol of hope. But for me, "The Red-Headed Beatle of 1,000 B.C.!" is the most fun, the most representative of a kind of breezy, unself-conscious comics storytelling that was about to vanish – that you can practically feel beginning to fade away with each passing panel: The last, goofiest gasp of the Crazypants Years.