Accessibility links
Movie Review: 'After Earth,' Directed By M. Night Shyamalan Now this is a movie all about how two humans live 1,000 years from now. Neither one's got even a lick of mirth as they land with a creature back on ruined Earth. Will Smith, Jaden Smith, M. Night Shyamalan — might have been better if one got his humor on.

Will, Jaden Smith In Space, Without Fun

Will, Jaden Smith In Space, Without Fun 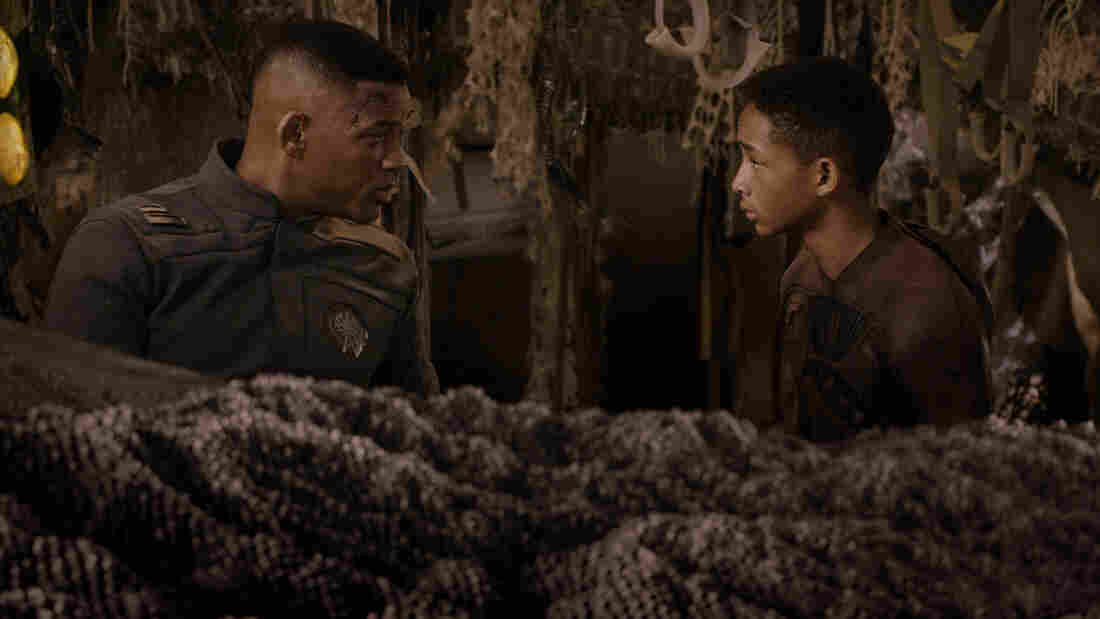 Will Smith (left) and Jaden Smith star in After Earth, an unfortunately humorless film. Courtesy of Columbia Pictures. hide caption 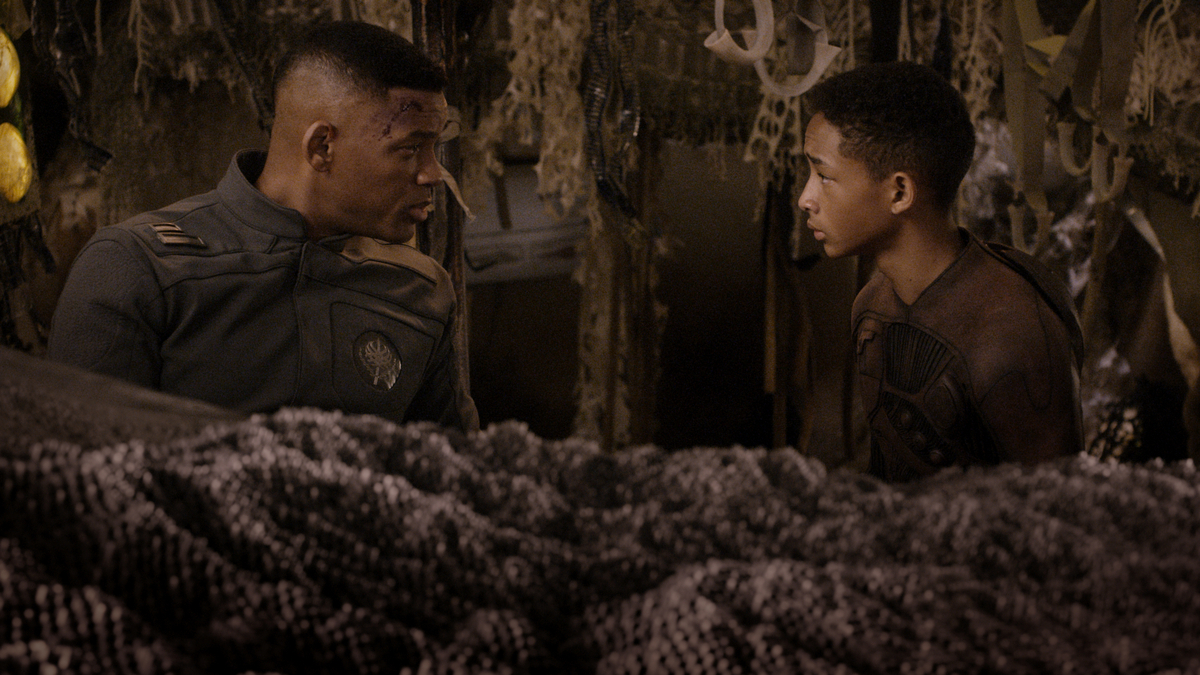 Will Smith (left) and Jaden Smith star in After Earth, an unfortunately humorless film.

With: Will Smith, Jaden Smith

A disastrous father-son endeavor about a calamitous father-son expedition, After Earth doesn't play to the strengths of any of its major participants.

Will Smith portrays a stern outer space hero devoid of the bantering wit and easygoing demeanor of his trademark roles. Director M. Night Shyamalan, auteur of twisty The Sixth Sense, struggles with a surprise-free plot and a trial-by-fire moral so earnest it suggests a circa-1944 World War II flick. And Jaden Smith, in the movie's tissue-thin principal role, is called on to act. He'll start losing viewers with his wooden opening narration.

Set 1,000 years in the future, the story begins long after humans have fled an environmentally trashed Earth. Their new home is hardly congenial, being populated by people-eating Ursa — creatures that aren't a form of bear; they're the usual space-monster hybrid of squid, cockroach and pit bull.

The Ursa are blind, but they can smell human dread. So the only people who can best then are those who are literally fearless, like Gen. Cypher Raige (the elder Smith). While he travels the universe, stoically doing brave stuff, his son Kitai (the younger Smith) is at Ranger Corps school, trying to become just like dreary old Dad.

As is characteristic of aspiring cinematic Top Guns, Kitai is academically brilliant and physically unsurpassed. But he's hobbled by terror that stems from a childhood incident and recurs — again and again and then again — in motivating flashbacks.

Steely dad and marshmallowy son get themselves in trouble while on the old man's One Last Mission. They're flying somewhere on a space cruiser that, absurdly, carries a captive Ursa. Slammed by an asteroid storm, the ship crashes on a "class 1 quarantine planet." (That would be Earth.) The only survivors are Cypher, Kitai and the Ursa.

Dad busts both legs in the wreck, so it's up to Kitai to retrieve the beacon that will summon the interstellar AAA to come give them a tow. "Everything on this planet has evolved to kill humans," cautions Cypher, a warning that turns out not to be true. Kitai tangles with mutant baboons and tigers, but he also gets aid from one of the supposedly homicidal critters.

The assistance is a sentimental moment that boosts the movie's cursory ecological message, which also involves Moby-Dick and a cameo by some whales. They might have swum out of Star Trek IV: The Voyage Home, the most humpback-friendly installment in that series.

M. Night Shyamalan: The Art of the Creepy Movie

It's obvious that the movie's major CGI threat will be not peeved Earth fauna, but that escaped Ursa. Kitai must eventually face the beast armed only with a high-tech cutlass, encouraging words from a dead relative and the kind of pure-heartedness you learn from starring in a Karate Kid remake.

After Earth's essential ingredients are its Point A-to-Point B scenario, merely adequate special effects and utter humorlessness. A few wisecracks might have distracted from the film's grim banality, but Smith apparently nixed that. The former sitcom star conceived the movie's story and is one of the producers, who also include his wife and brother-in-law.

Shyamalan, whose directorial decline has been precipitous, doesn't exactly energize the script, for which he shares on-screen credit with The Book of Eli's Gary Whitta. (Reportedly, several other script doctors tried to revive the patient.)

Ultimately, the movie takes another cue from old-timey war pictures and salutes itself. It no more earns that honor, however, than Will Smith deserves a Purple Heart for pretending to have broken his legs.