Accessibility links
Will Ill. Legalize Gay Marriage Before Legislature Adjourns? The clock is ticking for those who hope Illinois becomes the 13th state to legalize same-sex marriage. After passing the Illinois Senate in February, a bill to legalize gay marriage has stalled in the House. Backers are trying to get it through before the Legislature adjourns Friday night. 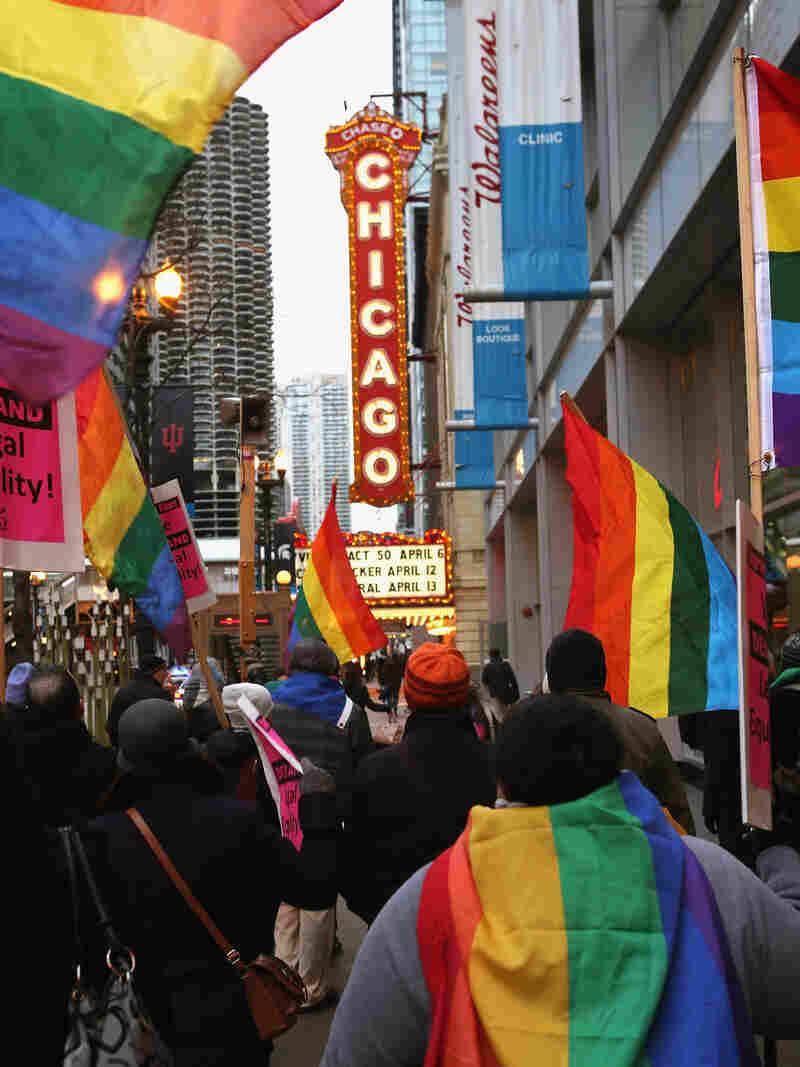 Activists rally in support of gay marriage on March 25 in Chicago. The Illinois Senate has approved legislation that will legalize same-sex marriage, but it has stalled in the state House. Scott Olson/Getty Images hide caption 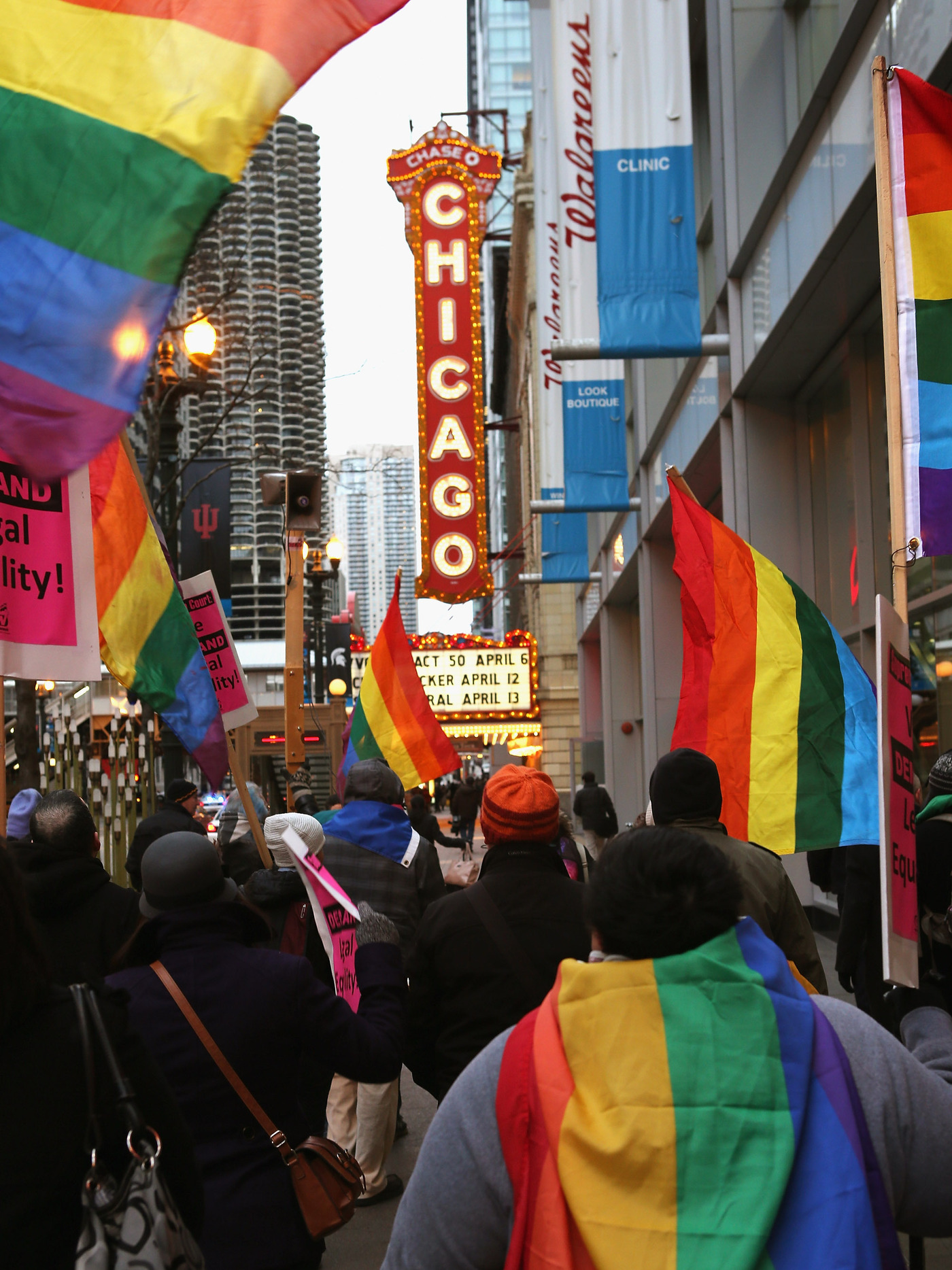 Activists rally in support of gay marriage on March 25 in Chicago. The Illinois Senate has approved legislation that will legalize same-sex marriage, but it has stalled in the state House.

The clock is ticking for those who hope Illinois will become the 13th state to legalize same-sex marriage.

The Illinois General Assembly is scheduled to adjourn its spring session Friday night, and the marriage equality bill still has not been called for a vote in the state House, where supporters are struggling to round up the 60 votes necessary to pass it.

Advocates of LGBT rights had hoped to make Illinois the first Midwestern state to legalize same-sex marriage legislatively (in Iowa, the state Supreme Court legalized same-sex marriage in 2009), but Minnesota beat the Land of Lincoln to that distinction earlier this month.

Illinois Gov. Pat Quinn, a Democrat, has vowed to sign a same-sex-marriage bill if it passes the Legislature. The Illinois Senate approved one on Valentine's Day by a wide margin, but the legislation has languished in the state House ever since.

The group Illinois Unites for Marriage — a coalition formed by the ACLU, Lambda Legal and the LGBT rights group Equality Illinois, among others — has used Twitter, Facebook and other social media, as well as old-fashioned phone banks every night this week, in a final push to get the gay-marriage bill passed.

In other words, they are trying to get gay-marriage supporters who live in key districts to light up the phones in the offices of lawmakers who might still be sitting on the fence. Those legislators include some suburban moderate Republicans, a few white and Latino Democrats in heavy Catholic districts and many of the 20 African-American members of the Illinois House.

A Focus On Black Voters

Opponents of the gay-marriage bill are mounting a similar effort to defeat it, focusing heavily on the African-American community.

At a recent news conference with other African-American clergy, Pastor Byron Brazier of the Apostolic Church of God in Chicago denounced the measure. 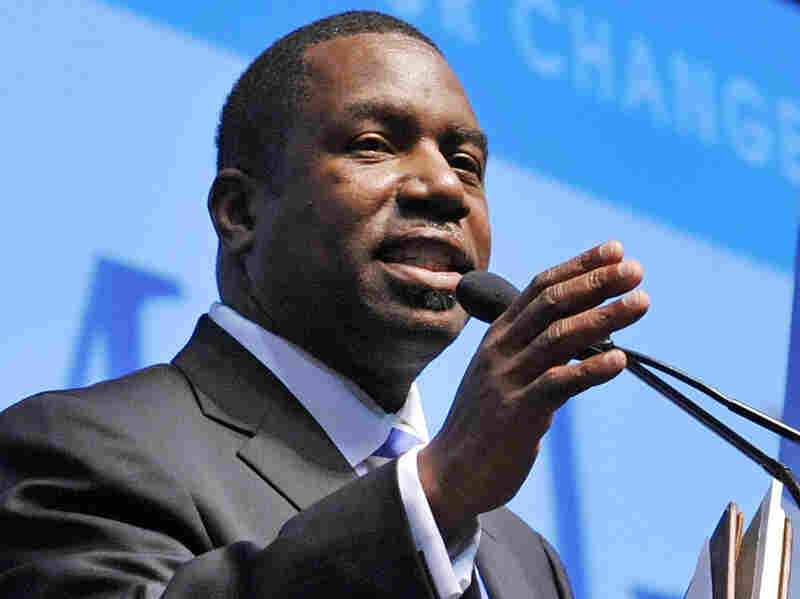 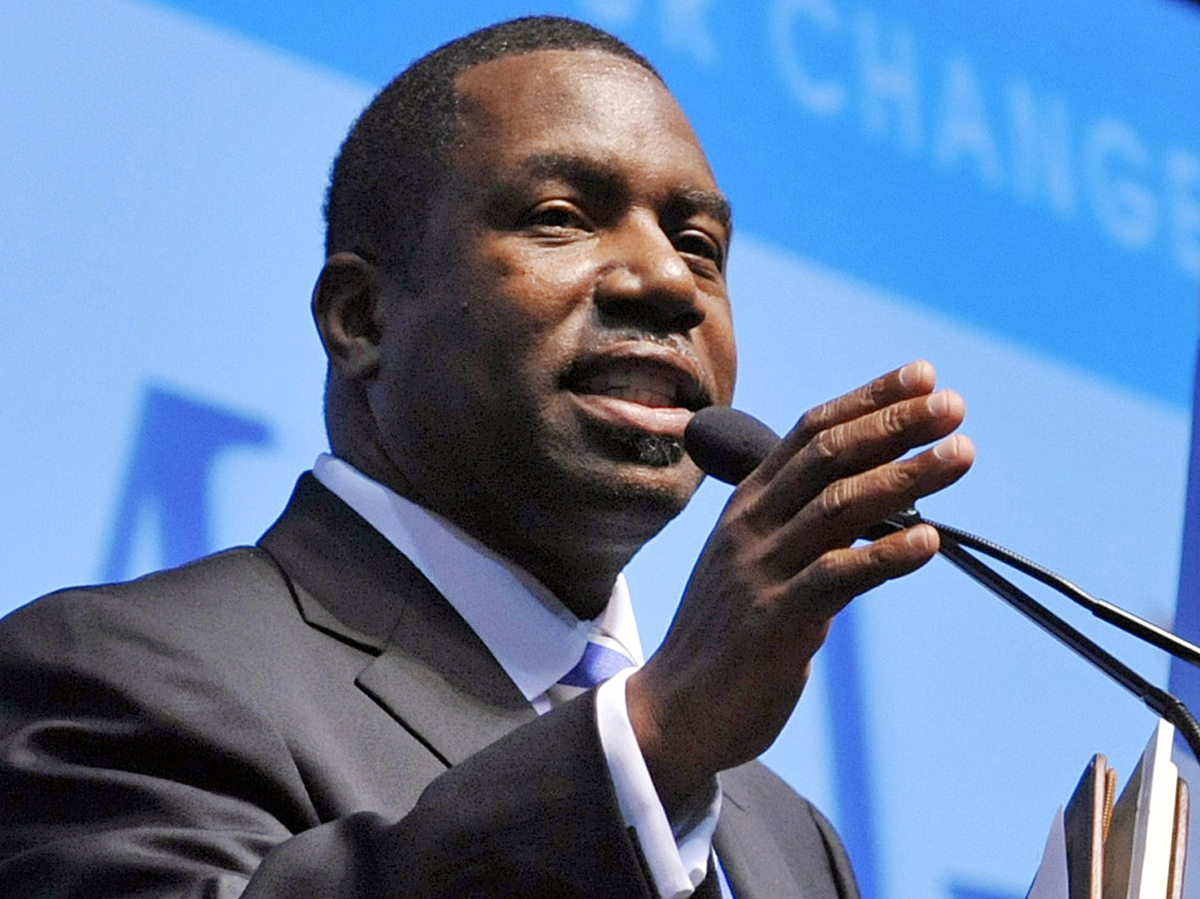 "We understand the Scriptures to teach that marriage is between man and woman," added Bishop Larry Trotter, senior pastor at Sweet Holy Spirit Church in Chicago. "This law being passed would cause a great ripple amongst the faith community and it would reduce what we stand for."

Trotter and Brazier are among the most politically influential African-American ministers in Chicago, along with the Rev. James Meeks, a former state senator and pastor of Salem Baptist Church, one of the city's biggest megachurches.

Meeks and the others have not only preached against gay marriage from the pulpit but have aired ads against the bill on black radio stations and have lent their voices to robocalls to African-American voters, saying: "Your representative needs to hear from you."

"The church and politics is a very constant mix in Chicago and in Illinois," says Laura Washington, a political analyst and Chicago Sun-Times columnist. "These ministers have megachurches, large congregations. They have a lot of clout in their communities and their members listen to them and take advice from them."

"The ministers often use their pulpits to sway votes in one direction or another," Washington adds.

But Washington also points out that the religious community is not unanimous in its opposition — it is actually quite divided on gay marriage. She says more and more African-American ministers in Chicago and elsewhere are supporting it, framing same-sex marriage as a civil rights issue.

"I think there's some hypocrisy involved when you're talking about ministers and elected officials who both benefited from the civil rights movement then [turned] their backs on others who have been left out of the system because of being different," Washington says.

A Visit From Obama

Supporters of gay marriage are using that sentiment to blitz residents in key African-American legislative districts with robocalls of their own, voiced by religious and civil rights leaders, including former NAACP Chairman Julian Bond.

The bill legalizing same-sex marriage, Bond says in the call, "will ensure fairness and equality for all Illinois couples and families."

Citing his experience fighting for what's fair and just, Bond adds: "Gay and lesbian couples have the same values as everyone else: love, commitment and stable families. They should have the same right to marry as the rest of us."

President Obama echoed that message at a private fundraising dinner in Chicago on Wednesday night, telling donors his home state's same-sex-marriage bill is "something I deeply support."

In remarks that were not recorded for broadcast, Obama added, "I am absolutely convinced it is the right thing to do. And we have to make sure that wherever we go, we are reminding people that the essence of America is that everybody is treated equally under the law without exception."

But in earlier remarks at a larger, more public fundraiser, where cameras and microphones were recording, the president didn't mention the same-sex-marriage bill at all and made only a passing reference to gay rights, saying that it "doesn't matter where you come from, what you look like, what faith you practice, who you love — that here in America, you can make it if you try."

Calling For A Vote

Since the legislation to legalize gay marriage was first introduced in Illinois, lawmakers in Rhode Island, Delaware and Minnesota have passed Illinois by and approved their own gay-marriage bills.

The sponsor of Illinois' gay-marriage bill, Chicago Democrat Greg Harris, is coy about exactly how many votes he has lined up in support of the measure, saying only that "we're close." Although he acknowledges some division on the issue within his own party, he insists the bill will pass.

"They see which way history is moving," says Harris of both his Democratic and Republican colleagues. "They've seen now 12 states before us make this decision. We have years of experience where none of the supposed ills have happened in any of these states which our opponents have predicted."

"Folks know this will be a vote that history will remember," Harris adds. "And I think a lot of folks are deciding they're going to want to be remembered on the right side of history."

Harris says he is determined to call the marriage equality bill for a vote before the Legislature adjourns Friday night, but opponents of same-sex marriage say if he really did have enough votes, it would already have passed.