Accessibility links
Rediscover Your Inner Anarchist In The Anti-Corporate 'East' The East is a romantic activist outlaw fantasy in which Brit Marling plays an agent who poses as a radical activist to catch an eco-terrorist group. It's one of those melodramas in which someone on the morally wrong side has a spasm of conscience and maybe crosses over. Maybe. 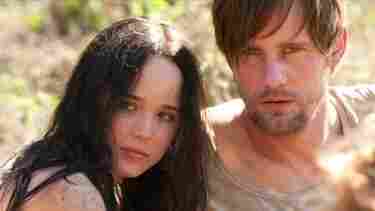 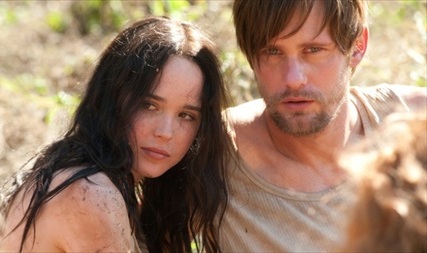 In The East, Ellen Page (left) and Alexander Skarsgard play members of an anarchist eco-terrorist collective.

The second collaboration between writer-director Zal Batmanglij and actress and co-writer Brit Marling is called The East, which happens to be the name of the movie's anti-corporate terrorist cult. Marling plays Sarah, an agent who infiltrates the group. She doesn't work for the FBI. Her employer is a private security and intelligence firm run by the sleek, profit-oriented Sharon, played by Patricia Clarkson. Its clients are Big Pharma, Big Oil, or Big Rich Any Corporation that, according to the group The East, poisons the world and everyone in it.

In outline, it's a standard conversion narrative — one of those melodramas in which someone on the morally wrong side has a spasm of conscience and maybe crosses over. Maybe. I don't want to say where Sarah ends up. The East is a romantic activist outlaw fantasy, but it has enough nuances and excellent actors with excellent hard-to-read faces to keep you guessing. It helped me rediscover my inner anarchist.

The key, I think, is that on the subject of cults, Batmanglij and Marling are genuinely and thrillingly ambivalent. Their less conventional first feature, Sound of My Voice, also centered on an underground group — in that case headed by Marling as a prophet who claimed to have traveled back in time from the future. The protagonists were documentary filmmakers pretending to join up — but under the spell of the cult's invasive rituals they lost their certainty.

So, of course, does Sarah in The East — and probably I would, too, given the coolness of the actors playing East-ers. The magnetic Alexander Skarsgard is the leader, Benji, and he's a soft-spoken dreamboat — but with secrets behind that facade. Ellen Page is wonderful as Izzy, who is suspicious and abrasive but finally heartbreaking in her commitment. Toby Kebbell is superb as a doctor whose experience with a poorly tested drug in Africa has led him to have seizures. That pharmaceutical company is the next target, the weapon its own product. Through all of this, we watch Sarah's face: Marling has a stillness that's riveting. It's no wonder that when she meets with Clarkson's Sharon — at one point on their building's roof — we don't know where her sympathies lie.

It's not a subtle film. And it's rigged. The East members bathe one another in a lake. They feed one another. They play trust games.

It's not a subtle film. And it's rigged. The East members bathe one another in a lake. They feed one another. They play trust games. They're a family — a little loony, a lot touchy-feely, but irresistible to those of us who still have counterculture dreams. The East might use dangerous outlaw tactics but is never in the context of the movie wrong. What, they ask, is worse: ejecting chemical waste into water that ends up giving children tumors or chucking lying CEOs into the same toxic soup and watching them sputter and flail? And what would be for someone like Sarah a judicious middle ground? What would be for us?

More On 'The East'