Accessibility links
Remapping Our Awareness Of Storm Surge Danger As with Hurricane Katrina and Superstorm Sandy, nearly all deaths from hurricanes come from storm surge. The danger isn't well understood by the public, however, so the National Hurricane Center is retooling its forecast and warning systems to better track and alert vulnerable residents. 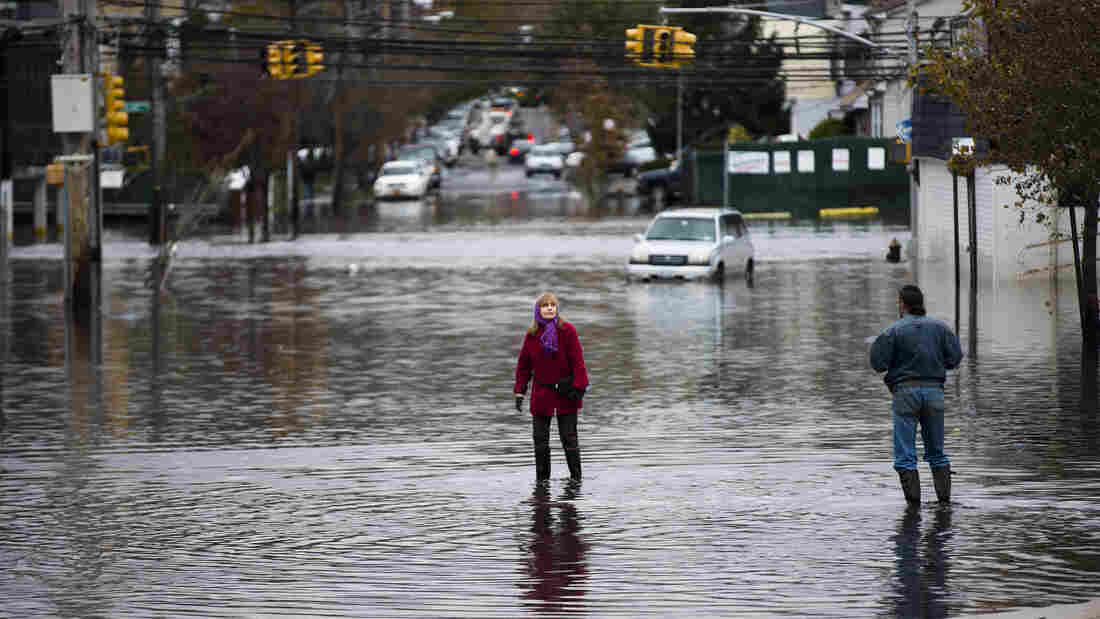 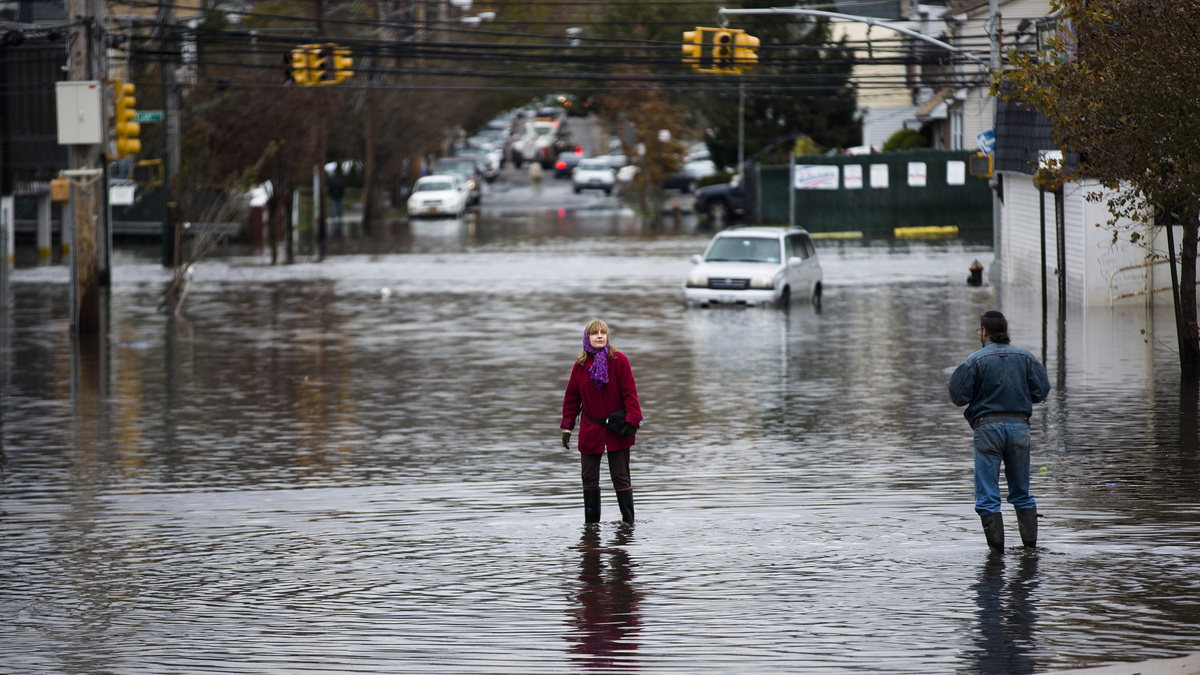 Hurricane season begins Saturday, and the National Oceanic and Atmospheric Administration is forecasting an active season, with perhaps seven to 11 hurricanes.

With memories of last year's destruction from Hurricane Sandy still fresh, meteorologists are working on ways to improve how they forecast storms and communicate warnings to the public.

When Sandy was making its way northward in the Atlantic and began to turn toward the East Coast, the National Hurricane Center tried to emphasize the danger that storm surge posed for residents, especially those near New York City.

The Hurricane Center's forecast warned of 6 to 11 feet of storm surge. As it turned out, the center was right on the money. Rising seawater, pushed by Sandy's powerful winds, came ashore and brought widespread flooding to New Jersey, Long Island, parts of Brooklyn and Staten Island.

"It was like the ocean came up on land," says Rosemary Caruso, who lives just a block from the water on Staten Island.

This wasn't the first time a storm had flooded Staten Island. There were storm surges in the 1930s, but back then many of the coastal areas were still undeveloped marshland.

When Sandy hit, thousands in vulnerable neighborhoods didn't evacuate, despite the warnings. More than 20 people died on Staten Island, most from drowning. Jamie Rhome, a storm surge specialist at the National Hurricane Center, says it's a problem seen in nearly every hurricane.

"In general, this nation does not understand storm surge, nor does it understand its vulnerability," Rhome says. "We've seen poll after poll of individuals, right at the coast, saying they're not vulnerable to storm surge."

As Sandy showed, it's a threat that's not limited to states along the Gulf and in the Southeast.

"The New York area is, what I think, one of the most vulnerable areas in the entire East Coast," says William Fritz, a geologist and president of the College of Staten Island.

Months before Sandy, Fritz worked with Alan Benimoff to map areas on the island vulnerable to storm surge. The map proved prescient. The morning after the storm, Benimoff was out on Staten Island charting the surge.

"It was terrible. I never saw anything like it," he says.

With the help of supercomputers at the University of North Carolina, Fritz says, his team is now prepared to do real-time modeling to understand the threat of storm surge as a hurricane approaches.

The problem, he says, is that public awareness of the threat of storm surge now lags behind science's ability to forecast it. 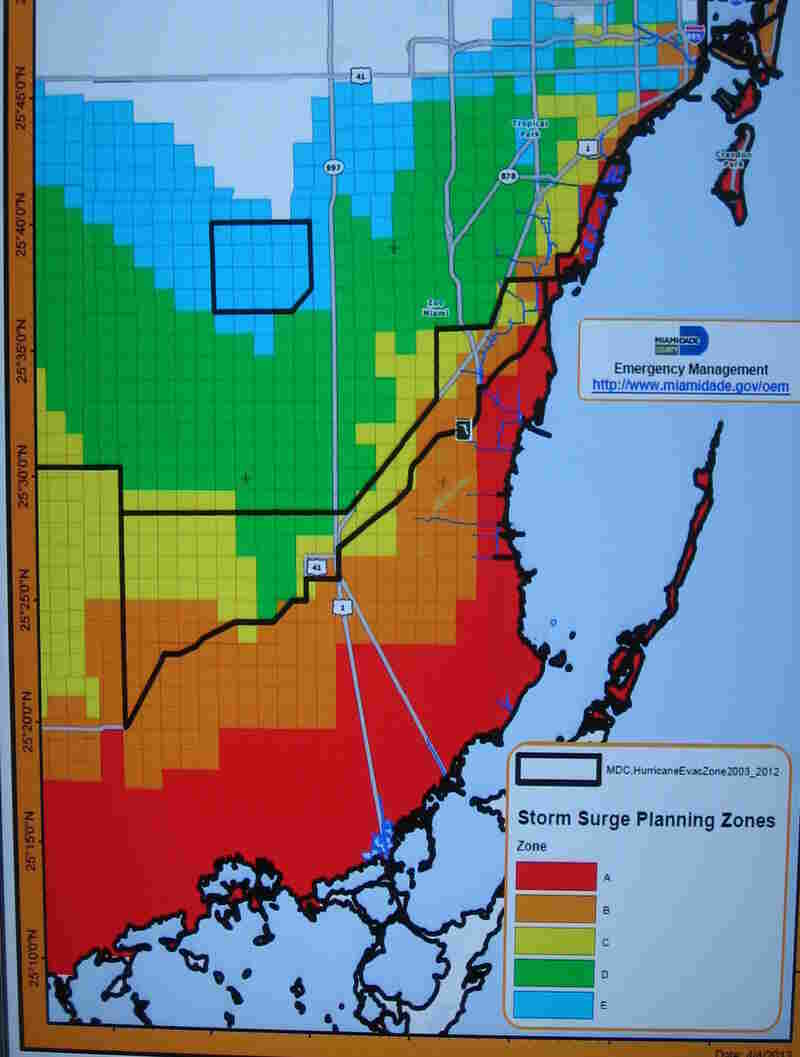 "Some of the people that lost their lives ... were a few blocks away from safe ground," Fritz says. "But they didn't know ... where the safe ground was."

Fritz is calling for a public education campaign similar to that used in the northwestern U.S. for tsunamis; one that would include signs identifying surge-prone areas and the nearest high ground.

Sandy's Damage Under The Sea, Through The Eyes Of Oyster Farmers

On the new maps, the number of people who live in areas that could potentially be evacuated has tripled. Emergency Management Director Curt Sommerhoff says that's nearly 2 million residents — most of the people who live in Miami-Dade County.

In a hurricane, emergency managers advise residents to shelter in place when at risk from high winds. But when there's a risk of storm surge — which causes the most damage and takes the most lives — they tell residents to evacuate.

Efforts to get that message to the public are also underway at the National Hurricane Center. One of the new tools is graphics and mapping software designed to be read and easily understood by the public.

Instead of technical terms like "height above mean sea level," the map tells coastal residents how deep the water is likely to be in their neighborhoods. The map is color-coded, too, explains Rhome, who helped design the software.

The new storm surge maps were intended to be ready by next year, National Hurricane Center officials say, but because of the need and strong demand by emergency managers, they hope to begin using them this summer.