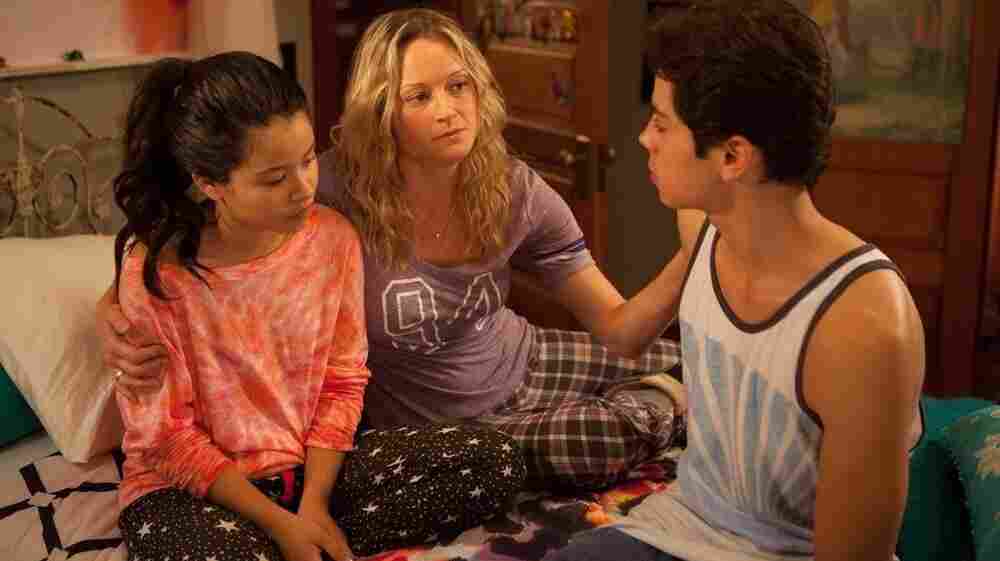 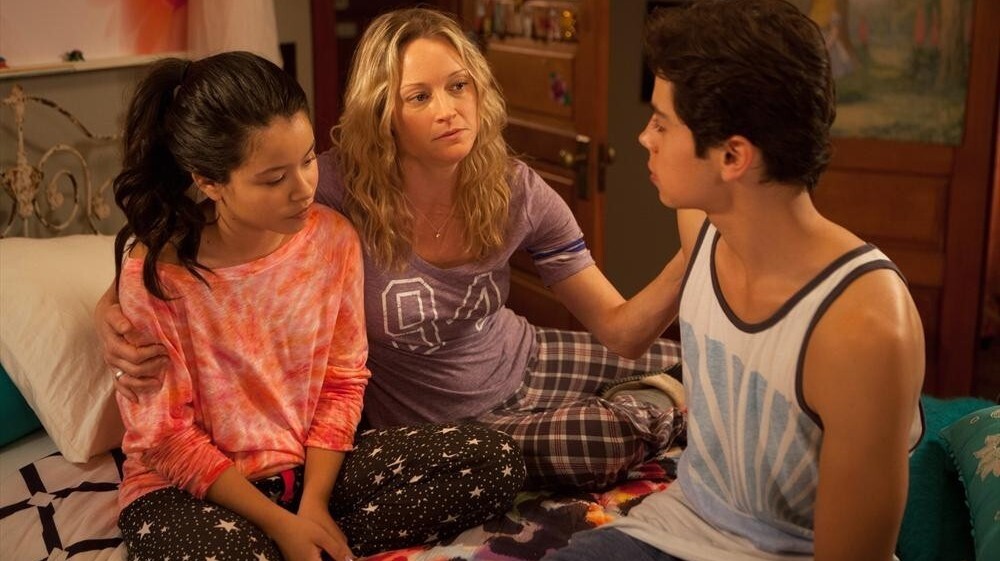 This summer, NPR is taking a closer look at media for kids, taking it as seriously as what's offered to adults. Our first piece looks at a new show starting Monday night on ABC Family.

The Fosters could not be more literally named. It's about a foster family with two moms: one black, one white. They're parenting a houseful of teenagers-- biological, adopted and fostered, from different cultural and ethic backgrounds. The first episode begins with a new kid, Callie, stumbling into the family, bruised physically and emotionally by the foster care system's inadequacies.

But is The Fosters realistic? I watched it with a real foster family in Washington, D.C.

"Oh God. A hundred percent," says Jamie Smith, an 18-year-old foster kid who sat riveted though the show with her friend Robert Garris and his two foster moms, Meg Gibbon and Angela Pelletier. All of them appreciated how the show handled foster kids' conflicted feelings about their birth parents as well as its sensitive depiction of showing up in a strange home, not knowing where you'll sleep, and even coping with abuse.

Naturally, The Fosters doesn't get everything right. Gibbon and Pelletier snickered a little about Callie's bureaucracy-free entrance into the family.

"The reality is, if they adopted the other kids five years ago, they're not still a certified foster home," Gibbon notes.

"They could have recertified, though!" Smith countered. But 17-year-old Garris disagreed. "Thirty hours; they didn't do all that."

It's safe to assume no one wants to watch a show about the drama of getting recertified. But the foster care system is filled with intensely moving stories of conflict and messy emotions. So why haven't there been more movies and TV shows about it?

"I think it's hard for us as a culture to look at the ways that we're failing," reflects one of the show's creators, Peter Paige. "We're failing some kids. There are kids without homes. How is that okay?"

You might remember Paige from his role as Emmett Honeycutt in the Showtime series Queer As Folk. He and co-creator Bradley Bredeweg were originally interested in creating a show that would star him as a gay dad. But there are plenty of gay dads on TV right now in Modern Family and The New Normal. Paige serves on the board of the Los Angeles Gay and Lesbian Center, and it was there he learned about a program for gay foster kids.

"I'll never forget the day you came back and told me about it," remembers Bredeweg. "And you got emotional, which in turn I got emotional and it sort of forced us to move in this direction."

They two sold the concept of a multicultural foster family to ABC Family. Jennifer Lopez, the singer, signed on as an executive producer. Joanna Johnson was a logical choice to run the show. She's a lesbian mom in a multicutural household — she's white, her wife is Latina and their two adopted kids are biracial. She says The Fosters is filled with details from her home life, like a moment when the moms have had a hard day. They're in bed, back to back, too tired to talk. Then one reaches out and they just hold hands.

"Which is a moment that happens sometimes," Johnson says. "When you're so spent from all the energy you give to your children and work and life and you need your space but just want to be connected."

(Side note: Johnson has a parallel career as an actor with a long-running recurring role on the soap opera The Bold and The Beautiful. She played twins, then one of the twins died, then the other became a lesbian mom. "Where'd you get that idea?" Johnson says she cracked to the show's producers when that particular development was introduced.)

Punnett runs a group called Family and Youth Initiative that connects foster teenagers with potential adoptive families. She says she's used to seeing kids without families vilified in popular culture, as in the 2009 movie Orphan, or simply ignored. She believes The Fosters provides a more nuanced view of older kids in foster care, and what it's like to parent them.

"There's an assumption that they're difficult," she says. "That it's too late to mold them, to turn them into who we think we want our children to be."

But, Punnett says in fact, older kids can be especially loving. They don't take love for granted. Often she says, they're desperately hungry for it. 17-year-old Robert Garris says it wasn't something he expected when he moved in with his current foster parents, Angela and Meg.

"Having so much — people care for you. I never had all that," he says. "Sometimes it's overwhelming. It's also good."

By the way, Smith added, if The Fosters' producers ever need real foster kids for special guest appearances — they can just call her and her friend Robert Garris. They're available.