Accessibility links
Supreme Court Rules DNA Can Be Taken After Arrest The court ruled Monday that police can routinely take DNA samples from people who are arrested but not yet convicted of a crime. The ruling compared DNA sampling to photographing and fingerprinting suspects when they are booked. 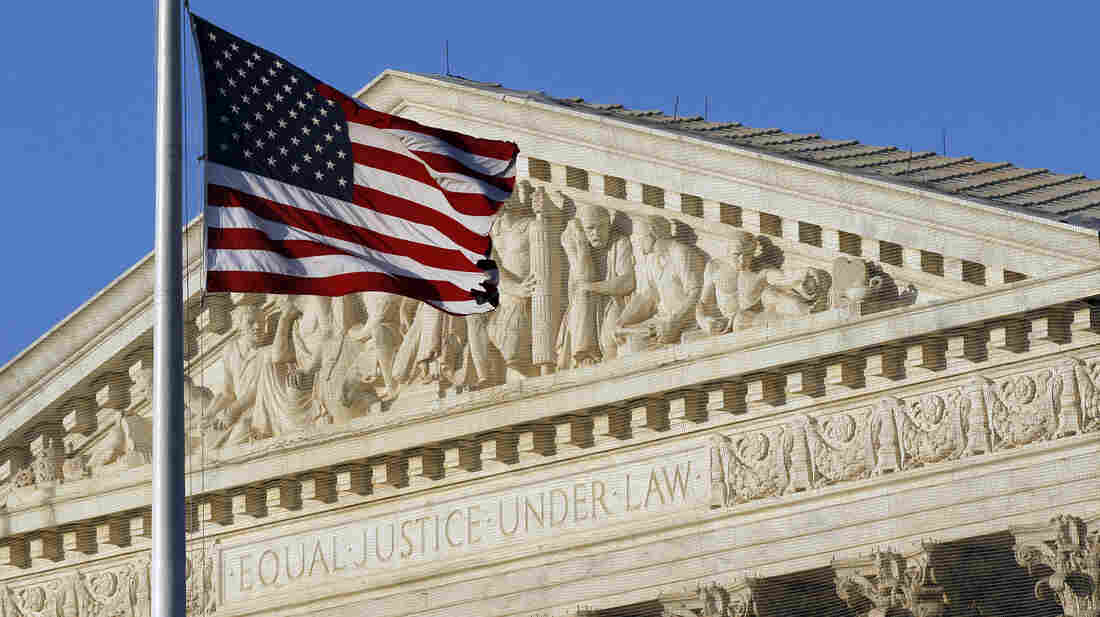 The U.S. Supreme Court ruled Monday in a case that looked at whether police could take DNA samples from people who had been arrested but not yet convicted of a crime. Alex Brandon/AP hide caption 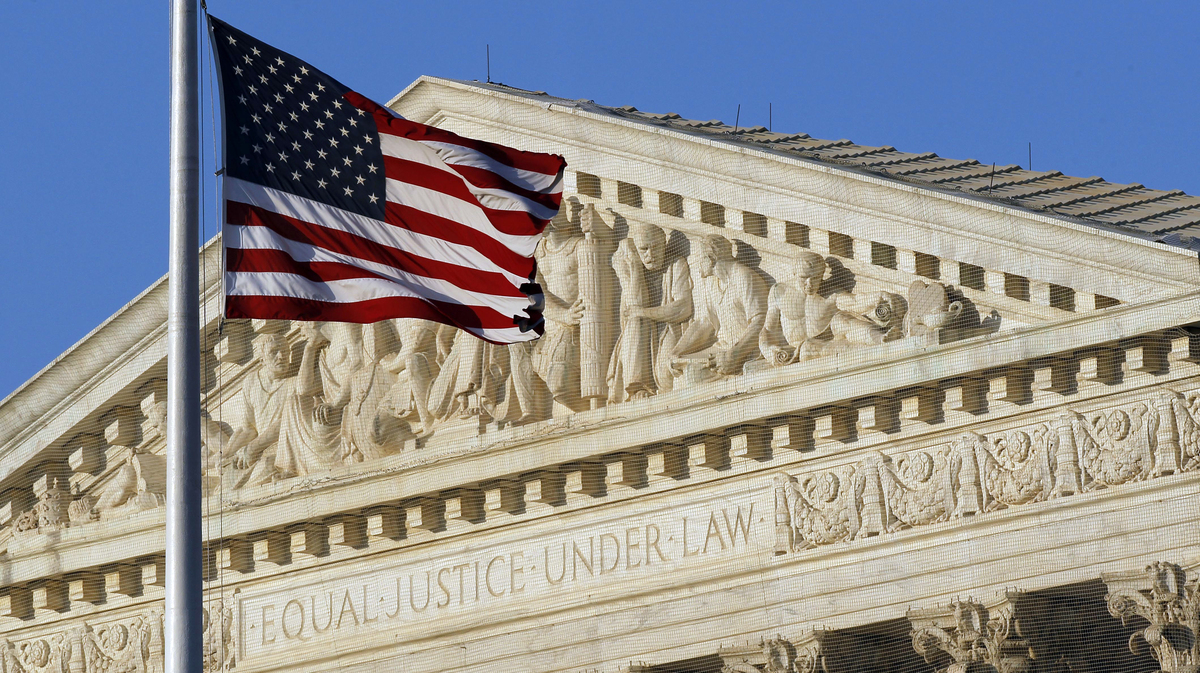 The U.S. Supreme Court ruled Monday in a case that looked at whether police could take DNA samples from people who had been arrested but not yet convicted of a crime.

The U.S. Supreme Court ruled Monday that police can routinely take DNA samples from people who are arrested but not yet convicted of a crime, and see if the DNA matches any samples from unsolved crimes in a national database.

The 5-to-4 decision split the court's conservative and liberal blocs, with conservative Justice Antonin Scalia authoring a fiery dissent. Twenty-eight states and the federal government have enacted laws that provide for automatic DNA testing of arrestees.

The court's ruling came in the case of Alonzo King, arrested in Maryland for menacing a crowd with a gun in 2009. Police took a DNA swab from his cheek and sent the DNA to a national database, where it showed a match to a rape six years earlier. King was subsequently tried for and convicted of the rape, but the conviction was thrown out on grounds that there was no warrant and no individualized suspicion that justified taking the DNA sample.

On Monday, the U.S. Supreme Court restored the conviction, comparing such DNA sampling to photographing and fingerprinting suspects when they are booked.

Writing for the five-justice majority, Justice Anthony Kennedy acknowledged that taking a DNA sample is a search, but the Fourth Amendment bars unreasonable searches, he observed, and a "gentle" swabbing of the cheek is not unreasonable. Nor, he said, is it unreasonable to use DNA to ascertain whether the arrestee has a criminal history that would make him a flight risk or a risk to the public if released on bail.

Kennedy noted that Maryland's law provides for automatic DNA testing of arrestees only when they are accused of "serious" crimes, and that the law bars any collection or use of DNA to detect private genetic information. In such circumstances, the court said, DNA collection is a legitimate booking procedure.

But Scalia, a staunch conservative, in a rare oral dissent from the bench, excoriated the majority. He said the court has never held that the government can conduct general suspicionless searches of anyone it arrests, and by doing so in this opinion, the court, he said, casts aside "a bedrock rule of Fourth Amendment law." Scalia lacerated the court's assertion that the DNA sample was taken to identify King, saying that it "taxes the credulity of the credulous."

"Make no mistake about it," he warned. "Because of today's decision, your DNA can be taken and entered into a national database if you are ever arrested, rightly or wrongly, and for whatever reason."

"But the proud men who wrote the charter of our liberties would not have been so eager to open their mouths for royal inspection," he said.

The dissent notwithstanding, law enforcement was jubilant at the victory. Marcus L. Brown, superintendent of the Maryland State Police, said he expects that the remaining 22 states will now adopt laws like Maryland's.

"I really can't see how other states won't," Brown said. "We view it as sort of the modern fingerprint."

Seconding that view was George Washington University law professor Stephen Saltzburg, author of a leading criminal law text. "Why would you want to be in a state that is unable to run DNA tests on people who are arrested and may have committed serious crimes?"

Both acknowledged, as did others, that the DNA is used as an investigative tool to solve cold cases.

"We can hang on to that DNA," Brown said, "and several years later, when that person commits another violent offense ... we're able to then go back and realize that these serial offenders can now be held accountable for what they've done."

Irv Gornstein, executive director of the Supreme Court Institute at Georgetown University Law Center, called it a "big deal for governments in general that are trying to solve cold cases."

"If the court had gone the other way, it would have significantly restricted the current program that's in effect in the federal government and most of the states," said Gornstein, who spent 29 years in the U.S. Justice Department.

"This is not just searching somebody's purse or knapsack who's been placed under arrest — or even searching their car," Maclin said. "We're searching their person in a situation where we don't have any basis for the search other than the fact that the guy's been arrested."

Gornstein concedes the point, noting that when Alito at oral argument called this case perhaps the most important criminal law case in decades, he wasn't talking about the state needing an additional tool to make bail decisions.

"I think he was quite explicit that there were these rapes and murders that were unsolved and here we have a ready mechanism for solving these crimes," Gornstein said.

George Washington University law professor Orin Kerr, a Fourth Amendment specialist, said the court's decision clears up most of the ambiguity that had existed about taking DNA samples from people at the time of their arrest, but he noted that the court left open some questions.

"The court is talking about serious offenses in this case, but they don't say what counts as a serious offense or whether they'd reach the same result for a nonserious offense. So we just don't know how far this opinion would apply," Kerr said.

Civil libertarians were disappointed by the ruling, but, perhaps because DNA has so often been used to free the innocent, the critiques were relatively muted. As Georgetown's Gornstein put it, the court majority's language, heaping praise on DNA testing for its reliability, "keeps up the momentum" to require the taking and keeping of DNA material in criminal prosecutions.