Accessibility links
Why Yes, I Did Watch A Movie Called 'Deadly Spa' You're not going to believe this movie is real. But it is. And we watched the whole thing.

Why Yes, I Did Watch A Movie Called 'Deadly Spa'

Why Yes, I Did Watch A Movie Called 'Deadly Spa' 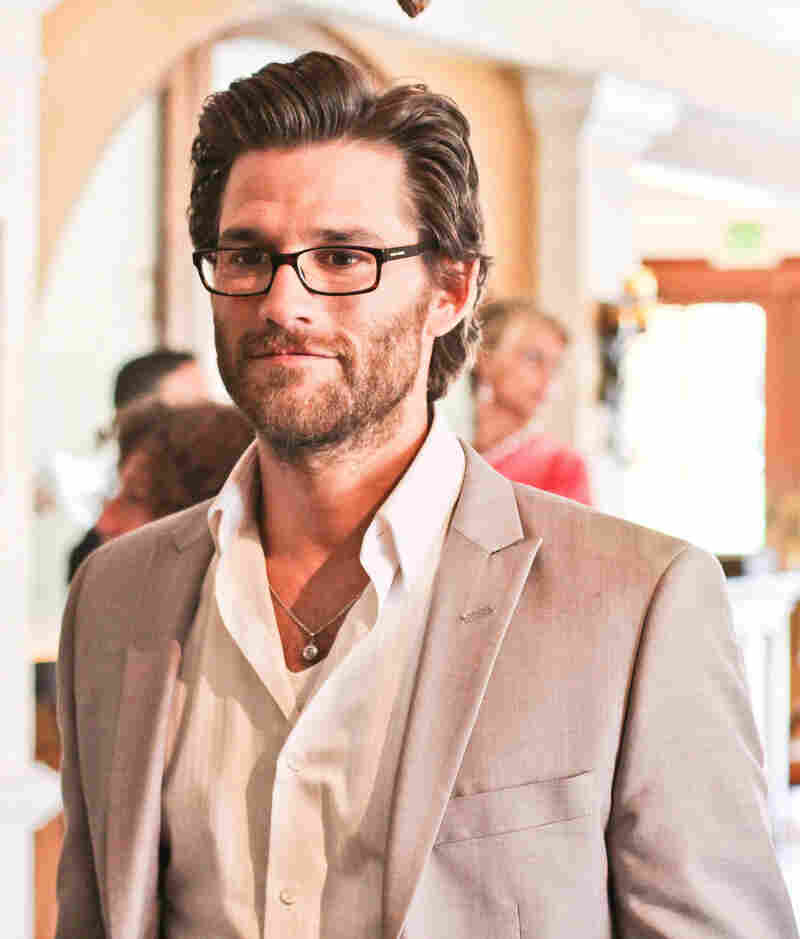 A couple of weeks ago, I noticed that Lifetime had a movie coming up that was about a spa where things get deadly. It was called Deadly Spa.

There's something about the name Deadly Spa that just feels like they came up with it while drunk by cutting out the descriptions of all the other programs on Lifetime and throwing them in a hat, then pulling them out in bunches. And after rejecting Heartland Baby Wedding and Dangerous Cheerleader Yoga Kitchen, they went with Deadly Spa and then wrote the movie around it, I figured. "What kind of a spa," I envisioned them asking aloud, "would become, you know, deadly?"

Okay. So think about this. Think about the meeting where somebody says, "Yes. Yes, we will acquire that movie Zephyr Springs. But we need a more, you know ... a more catchy title. Something with some zing! Something with some personality! Something that says 'I am like the generic spaghetti in the box that just says SPAGHETTI.' What if we called it ... Hazardous Oasis?"

"I'm not sure we want to bank on people knowing what 'ominous' means. Many of them will be drinking. And if they're not, we have bigger problems."

"Robertson, you're a genius! Lois, get Robertson a cigar!"

During the days leading up to the movie, I speculated on tag lines ("Deadly Spa: For these ladies, that's a wrap") and subtitles ("Deadly Spa: Brazilian Whacks"). But then on Saturday night, when you were probably enjoying the discothèque with the other sophisticates, it was finally on: Deadly Spa. 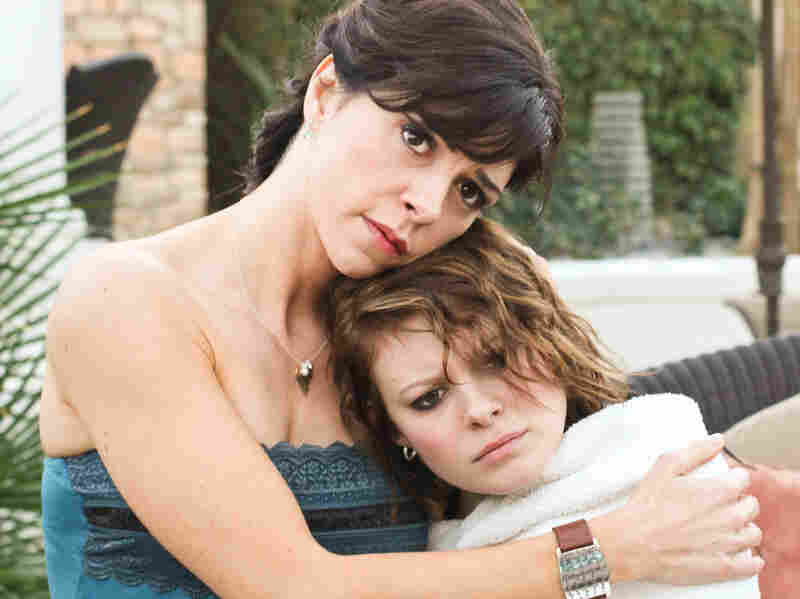 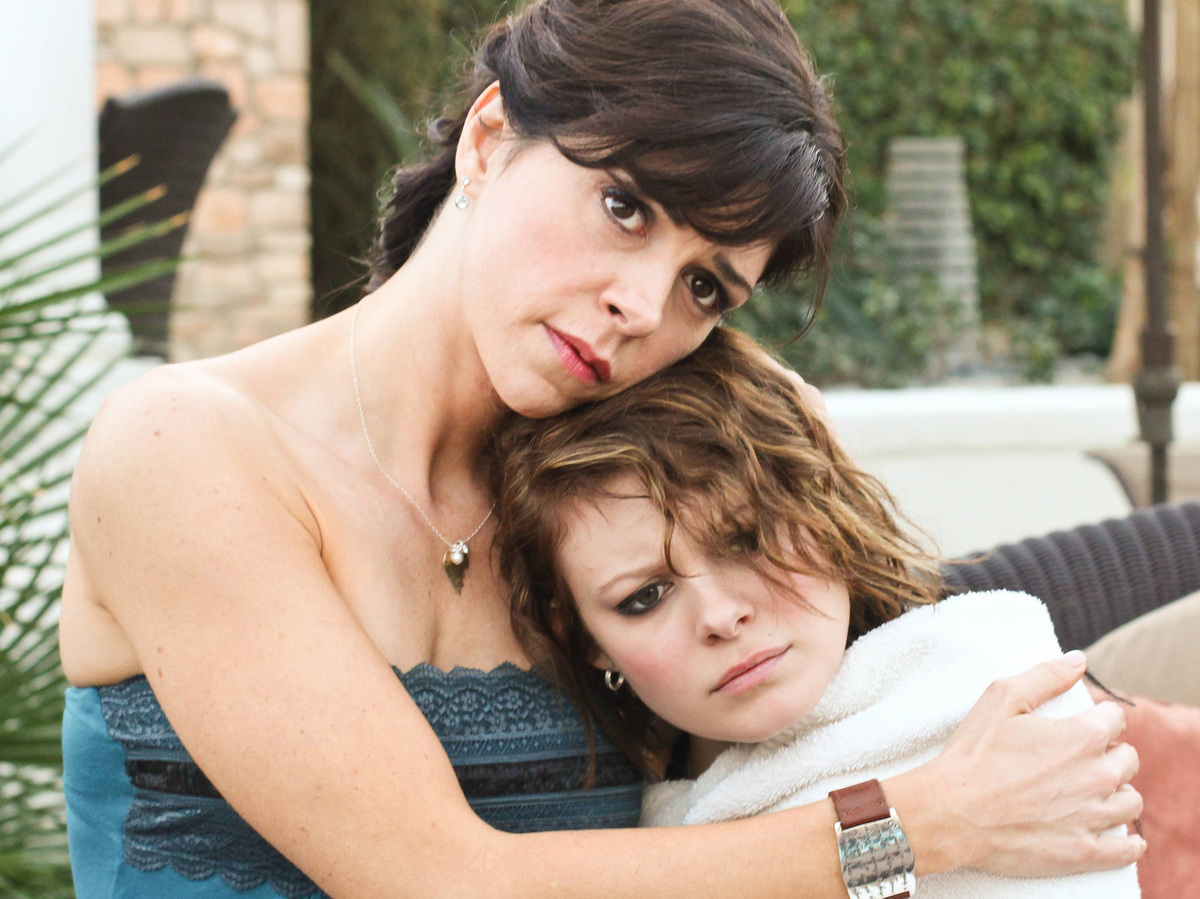 Amy Pietz and Tracey Fairaway as Dawn and Kayla.

(I am doing this from memory. Just so you know.)

So in the movie, Dawn (played by Amy Pietz, who has actually lost some career juice since she was the best friend in Caroline In The City) and her college-aged daughter Kayla (which is pronounced "Kyla") are doing yoga one day when Kayla tells her mother that she reeeeally ought to relax somewhere wonderful. "Like ... there!" says Kayla, pointing at a poster for a getaway called "The Source," which features a little picture of a bearded dude who looks nothing like a spa owner and everything like a guy who would have played a college professor someone dated who turned out to be a psycho in the later years of Beverly Hills, 90210. Dawn notes that the place is very expensive, and they don't after all know anything about it except that there's a poster for it in the lobby of the You Really Need To Relax Yoga Studio, but Dawn will go if Kayla will go with her.

So they go to the spa, and they follow the directions and find themselves in a creepy vacant lot where they're picked up by a white van. This doesn't make them think anything particularly negative except that they're maybe not going to say nice things on TripAdvisor.

When they get to the Deadly Spa, though, they find that it's absolutely gorgeous, of course. Deadly Beard takes their cell phones away from them, for the relaxing and the menacing, and starts talking about everything they're going to learn, Namaste, and so forth.

Not long after that, just as she and Dawn are settling in, Kayla takes a wrong turn at the sauna, goes down a dark hallway, and accidentally witnesses Deadly Beard and his right-hand man, the very menacing Caftan Charlie (I have no idea what his name was, but he's the only one dressed in a caftan like it's a stereotypical ... you know, cult), interrogating and chokehold-ing someone who apparently tried to get away without paying for his pedicure — or possibly is being imprisoned by a cult. Terrified, Kayla does the only thing she can think of, which is to lock herself in the sauna (sure!), and when Deadly Beard realizes she saw something, he locks her in the sauna and tries to steam her like a fish fillet. She escapes at the last minute and tells her mother, but her mother is developing Deadly Beard Feelings, so when Deadly Beard explains it away by claiming they were interrogating a thieving employee — and since Kayla missed the part where Caftan Charlie snapped the guy's neck — Dawn believes him and tells Kayla that in spite of her terrified conviction that Deadly Beard is dangerous, they're staying for the rest of their relaxing spa weekend.

Now if it were me, I think I'd conclude that my teenager's relaxing spa weekend was over once she believed the spa owner was a dangerous killer, even if she was wrong about that, but Dawn has her own ways.

Somewhere along here, Dawn is getting a massage when Deadly Beard sneaks in and surreptitiously replaces her massage therapist, because that's not creepy at all, and she says she's never felt so great, blah blah, and thus does a romance begin. 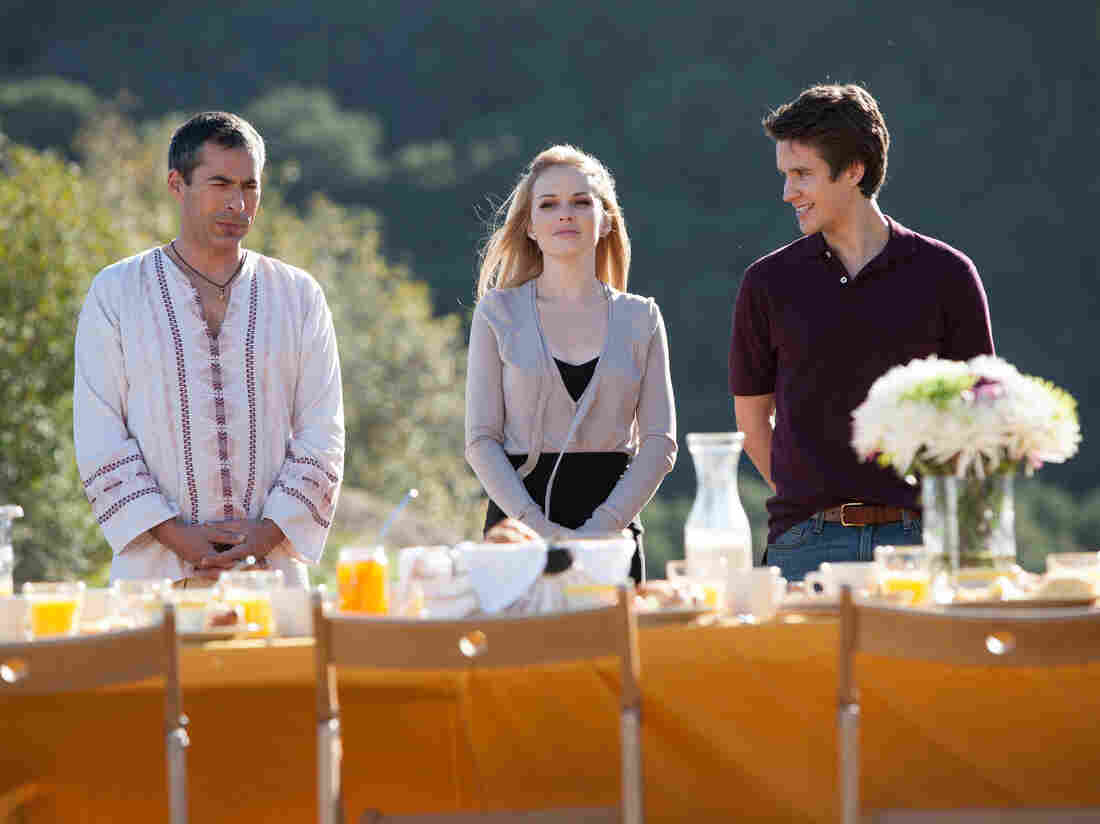 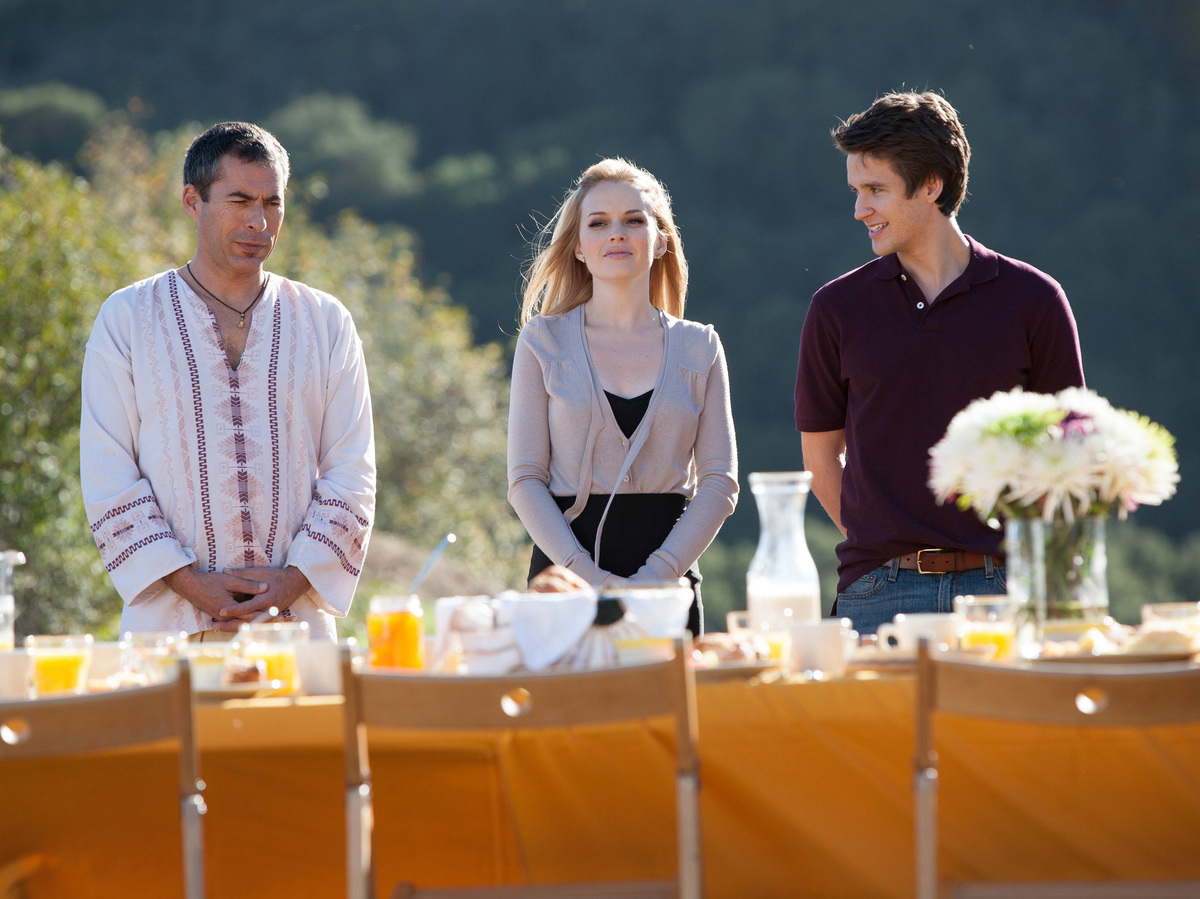 Kayla begins a flirtation with Doomed F. Simpleton, a guy who works at the Deadly Spa but clearly has misgivings. (Probably about the death part, not the spa part.) Doomed tries to warn Kayla, but when Deadly Beard finds out, he stabs Doomed in the neck with an arrow and Caftan Charlie buries him while his foot is still twitching. No fooling!

But wait! Before that, the best part involves some sort of spa luau, where a couple of spa guests/cult members sing the worst song ever invented, and Caftan Charlie sings something too, I think? Anyway, it's a big party that would remind you a lot of the classic elegant gatherings of Beyond The Valley Of The Dolls.

Fast forward, and Kayla decides she's going to make a run for it from the Deadly Spa. But before she can get away, Caftan Charlie catches up with her, recaptures her, and returns her to Deadly Beard, who ties her to a pole and makes her listen to recordings of him telling her she's worthless.

(This is all real, by the way. It was on Lifetime.)

Dawn eventually catches on, but when she tries to rescue Kayla using the last bits of information Doomed F. Simpleton was able to pass along before his neck-stabbing, she's captured, though Kayla gets away.

Wait, somewhere along here, Dawn kills Caftan Charlie by throwing him off the side of a mountain. So that's that.

Now, the part we haven't been discussing up until now is that Dawn and Kayla were studying archery as part of their activities at Deadly Spa, and apparently, in what was scheduled to be a "spa weekend," Kayla has become quite good. When Dawn takes off to try to rescue Kayla, she takes a bow and some arrows with her, and even as she's captured, she manages to hand them off to Kayla. This explains how Kayla winds up stumbling into the road into the path of a dopey dude in a car who tries to rescue her but finds himself run off the road by Deadly Beard, who chloroforms Kayla and sticks her in the car along with her mother, who's in the trunk. While trying to return the two women to the Deadly Spa ("YOU BOTH MUST BE EXFOLIATED!" he tragically does not say), Deadly Beard removes Dawn from the car first. So Kayla hits him with an arrow, but it's only a flesh wound, and the menacing continues.

Finally, the climactic confrontation occurs in the big cabin-warehouse thing where Deadly Beard keeps prisoners (and perhaps performs body wraps). It turns out that Deadly Beard has a gun, but in the ultimate battle between his gun and Kayla's bow and arrow, she is victorious, and he falls dead on the floor with an arrow through the heart. As Kayla and Dawn stand over his body, Kayla says, "Mom, let's go home." And now, despite all the money she paid for the spa vacation, Dawn has actually had enough. (She still will probably pan the place on TripAdvisor.) They leave together, apparently realizing that they've now both killed people, and also Dawn witnessed the arrow-in-the-necking of Kayla's almost-boyfriend, so now they are really really bonded to each other. And everyone who was mean to them is dead, except for the blonde henchlady who, we see at the end, is still running the Deadly Spa! All the better to lead us forward to Deadly Spa 2: That's Not A Jacuzzi!.